Cary, NC — This week we honored, celebrated and remembered our veterans.

Monday I contacted each council member for questions or concerns they may have had on the regularly scheduled meeting agenda. Comments included the tennis center improvements, Lewey Drive rezoning proposal, the meeting schedule, and the district options. In my individual conversations with council members, I recommended they consider adding shade structures to the tennis center lighting improvements which would make us USTA ready for professional tournaments.

Later Monday I met with management and staff to go over the agenda items and comments from council members. Our meeting concluded after about fifteen minutes.

Monday night I attended the VFW 7383 banquet held for the National VFW President, Jean Hamil, who was visiting Cary as part of her journey to visit all 50 states. I made remarks, presented her a small gift, and read a proclamation naming the day “Soaring Above & Beyond” which is the VFW Auxiliary theme for this year. My remarks included:

“… It takes a special person to be willing to risk everything about their being for the betterment of others. And November 11th is a reminder of all those who, along with their family members, were willing to take that risk and who sacrificed, continue to sacrifice, and gave the ultimate sacrifice to secure our freedom. And because of you that people like me are not only blessed to have comforts of life but blessed to know that we are safe and free. Thank you and GOD BLESS YOU! …”

There were dozens of veterans and family members of veterans in attendance. It was truly an honor to be in their presence. 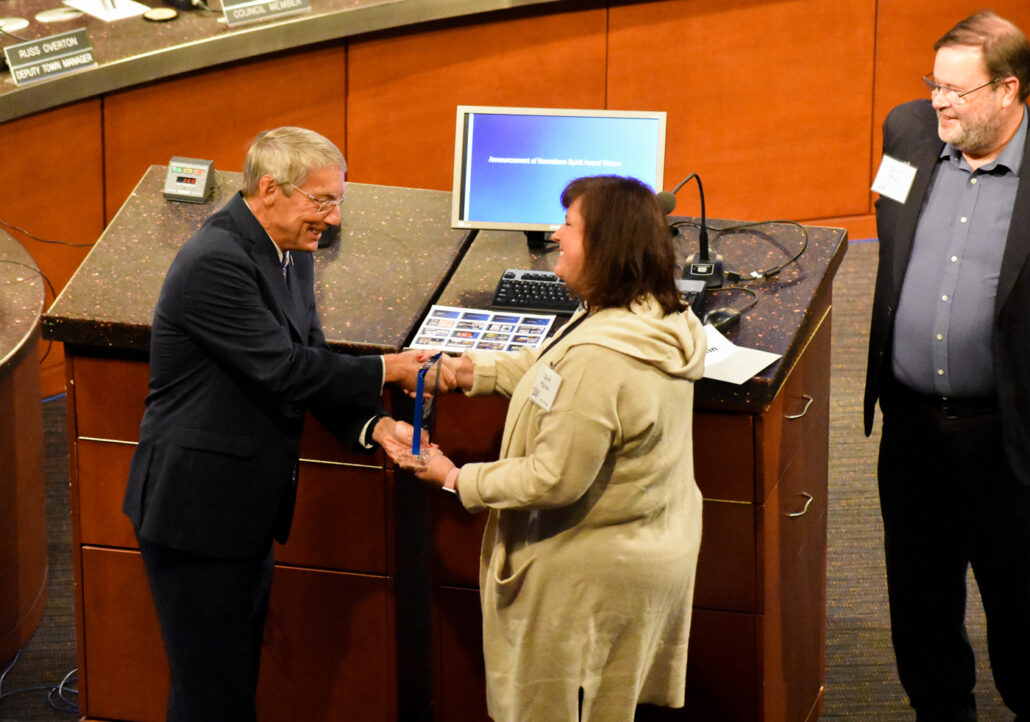 Tuesday afternoon I provided remarks at a reception for the Hometown Spirit Award nominees. As usual, the nominees were outstanding Cary citizens. This year’s nominees were Sarah Martin, Carla Michaels, and Barry Mitsch.

Sarah’s nominators described her as one of the warmest, kindest citizens Cary has ever known. Sarah has been a longtime volunteer and leader on Cary’s Parks, Recreation and Cultural Advisory Boards and Cary’s Festival Committees.

Carla’s nominators said she has a huge pride and passion for family and hometown roots. She is an active member of Friends of the Page-Walker, Preservation Committee, along with leading Asbury Station Chapter of the National Society Daughters of the American Revolution.

Barry’s nominators shared that when it comes to people who lead by example, his name comes to mind. He is the co-founder of the Pyramid Resource Group – a corporate coaching company, an adjunct faculty member for NC State’s Jenkins MBA program, has served on the Cary Chamber’s Board of Directors, chaired the Cary Sports Alliance, and five of Cary’s boards. After the reception the nominees and attendees were invited to the council meeting.

The council meeting’s first order of business was the naming of the Hometown Spirit Award winner. Since I am not involved in the selection, I was eager to hear who had won. Brent Miller, last year’s winner, announced that Sarah Martin was this year’s winner. We are so blessed to have fantastic nominees year after year. Congratulations to Sarah!

The remainder of the meeting included a Cary 150 moment, 9 consent agenda items, 3 public hearings, and 2 discussion items. In the Cary 150 moment, Council member Yerha read a poem about Cary’s founding, its past, and what makes us great today. It finished with the line “here’s to Cary the place we adore.” 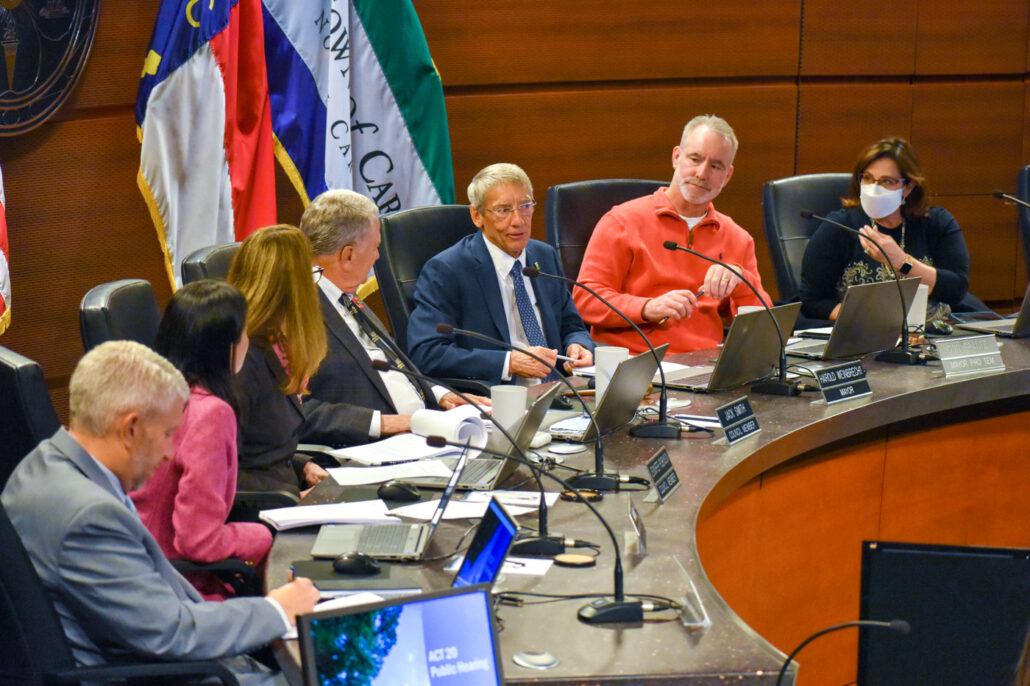 The public hearing for the SRI Venkateswara had several speakers in support of an assembly hall to be used for weddings and other events.

Most of the speakers for the evening spoke at the Cary Housing Plan. Many urging us to adopt it which was interesting since we asked for its creation. It was unanimously approved after each council member spoke in support for the housing initiatives and especially affordable housing initiatives in the plan.

Under discussion, the council unanimously approved Cary Tennis Park facility improvements that will enhance existing tournaments and give the facility the ability to host a range of higher-level professional men’s and women’s events. Near-term improvements focus on court lighting, shade for spectators and a phased clubhouse expansion. Funding was approved at this meeting so that court lighting upgrades could be complete for summer 2022 events.

Council also approved new district boundary maps. This was a modification to the maps council adopted in June. Since that time, changes to election dates and process were signed into law by Governor Cooper and current census data was released by the federal government. In response to these actions and to address the population variance test for all districts, redistricting is required prior to filing dates for the March election. As a next step, the new map will be submitted to the Wake County Board of Elections for use in the upcoming election on March 8, 2022. Citizens can find more information about Town Council, the upcoming election, and a search tool to find their current district and representatives at townofcary.org/districts.

The meeting concluded after about 2 ½ hours.

A Few Words on Affordable Housing

Thursday I was contacted by the media to make a statement about affordable housing. Here is my statement:

“As those who have read the Cary Housing Plan recognize, this issue requires commitment and focus. The Council’s unanimous vote this week, combined with the support of our citizens and advocates, is indication of the strong interest in this topic. Cary is prepared to do what is needed to move forward with the plan recommendations. That is consistent with Cary’s approach to so many important issues and why we live inspired. The issue of affordability is a regional, state and national issue, one that can only be addressed by working together.” 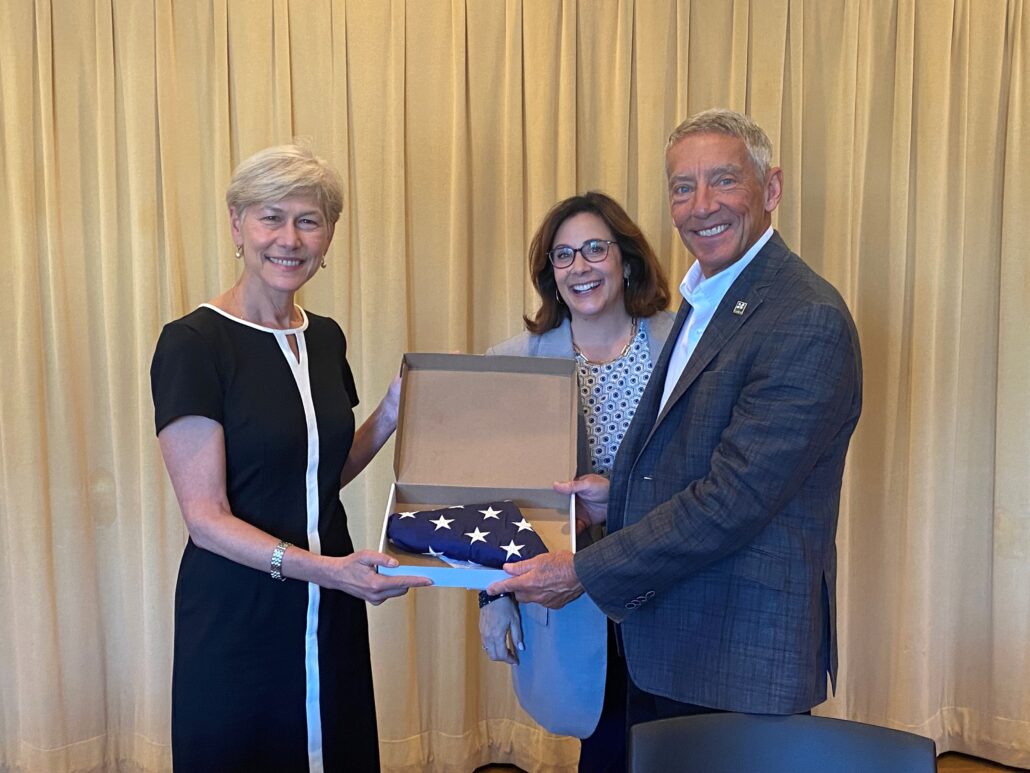 Friday I joined council member Bush and several staff members for a lunch at the Cary Arts Center with Congresswoman Deborah Ross.

We talked about the infrastructure plan that was approved and how critical that was to Cary’s future. Our discussion also included topics such as affordable housing, transit, and growth-related issues. After lunch she presented me, council member Bush, and the town, a flag that was flown over the Capital to commemorate Cary’s 150th anniversary.

After the presentation, we toured the Walker development which gave us great views of the downtown park that is under construction. Our meeting concluded in a little over an hour.

Budget Work in the General Assembly

Friday’s meeting of the North Carolina Metro Mayors was canceled. The following was information provided by the Kilpatrick Townsend Government Relations Team:

“… No substantive work took place at the NC General Assembly this week. The House and Senate did not convene or conduct any committee work. With the redistricting process complete, the only major outstanding item that remains for this session is the budget. Republican leadership has informed Governor Cooper they plan to move forward with their own budget proposal next week. The spending plan is expected to be released Monday and moved through the legislature by Thursday. Leadership has indicated the proposal does not include Medicaid expansion but does contain a number of the Governor’s priorities.

Governor Cooper will have the option to sign, veto, or allow the bill to become law without his signature. If the Governor vetoes the plan, the legislature would have to conduct a veto override. An override requires a three-fifths majority vote. This means Republicans need three Democrats to vote for the override in the House and two in the Senate. …” 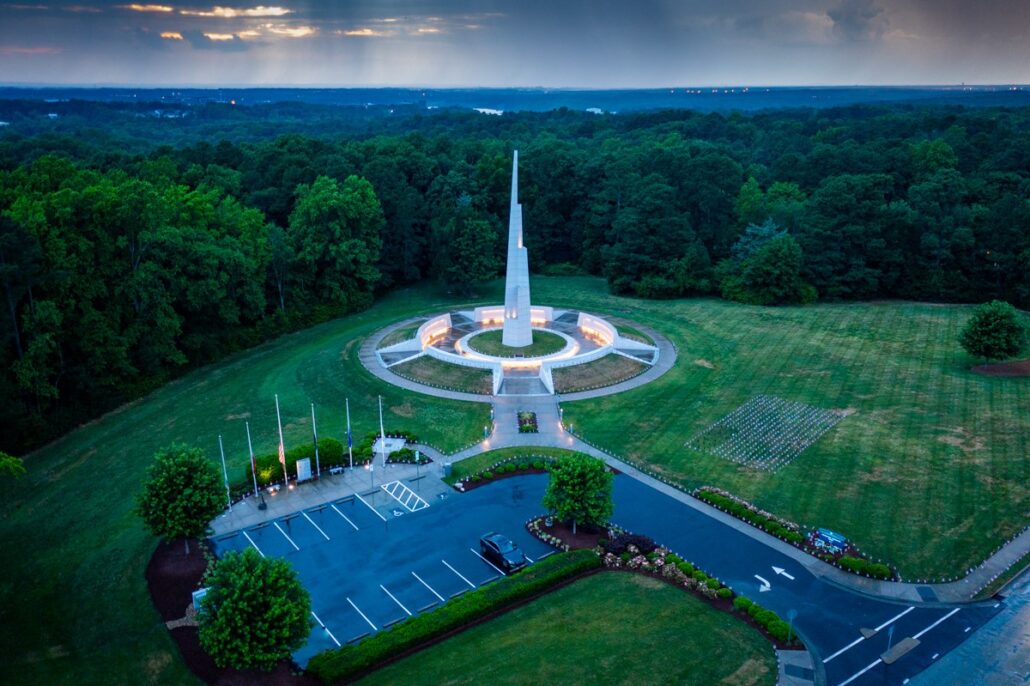 Their Methodist Men recognized current and past veterans in attendance who have been members of the church. One of those veterans of World War II was Thomas Wayne Mitchell who ran Mitchell Pharmacy for many years. That pharmacy was at the site that is now Pharmacy Bottle and Beverage (now you know where the name came from). Their program highlighted many organizations helping veterans.

The guest speaker was US Air Force retired Sr. Master Sergeant Tiwanda Griffin-Greer who had an incredible story of survival and faith amidst devastating challenges. I am so grateful to be invited to such a powerful event and to be presented with a copy of “Called To Serve” which was dedicated to veterans and family over the past 150 years.

Staff was asked to provide information about affordable housing funding in Cary. They noted that funding during this fiscal year has exceeded the one percent of the operating budget that is being proposed by a political group.

Funding for Cary’s housing initiatives has increased every year over the last several years. Recent increases have been allocated to supportive services to address community needs due to the impact of COVID. Moving forward, staff is developing recommendations for future housing budgetary commitments based on the Cary Housing Plan.

The Cary Housing Plan has many recommendations that reflect the importance of Cary’s continued commitment to related programs and activities including transit, the environment, and various community engagement initiatives. Each of these related activities have separate, dedicated resources which are evaluated annually, much like the housing resources.

In response to questions about electric vehicles in the town’s fleet, the staff responded with the following information:

“Cary is on the way to electric. Our first three Teslas arrived this summer, with final upfitting for the two being used by police almost complete. The third has been in service since it arrived and is working great for our South Cary Water Reclamation Facility. Tesla was chosen because of its high-performance capabilities and the return on investment will be comparable to other vehicles. We are testing the first ones to see if they meet the expectations and are working on an electric transition plan at the same time. Next week, we are testing electric mowers that also look promising. In addition to these and many other environmental funding allocations, Council approved funding for an electric garbage truck, which is on order but has been delayed due to supply chain issues related to COVID. There’s a lot going on with other emissions reduction work (using solar, planting more trees, etc.). We are very optimistic about these efforts.”

Next week’s activities include staff meetings, a meeting of the Wake County Mayors Association, a State of Cary address at the Cary MacGregor Rotary, the opening of the Chinese Lantern Festival, a CAMPO Executive Board meeting, and a council-staff mini retreat in Pinehurst.

Well, that is all for this week. My next post will be on Sunday, November 21st. Although I have Facebook and Twitter accounts those are not the best means of communications with me. Please send all Town of Cary questions or comments to Harold.Weinbrecht@townofcary.org and email personal comments to augustanat@mindspring.com.