Cary, NC — Andrei Svechnikov was the bookend of the night, getting the first and last of the Carolina Hurricanes’ goals to lead the Canes to a 6-3 win over a very good New York Islander team in front of a full barn of Caniacs.

Due to the pandemic, it’s been over a year and a half since the PNC Arena has had a full house and the Canes just couldn’t let their faithful Caniacs down.

For a team that went through a fairly major adjustment during the offseason, the Canes played some typical Rod Brind’Amour style hockey with tenacious forechecking and speed on the puck.

Normally, goalies seem to have the advantage early in the season but throughout the league, that hasn’t been the case this year. Both goalies seemed to struggle at times and for newcomer Frederick Andersen, his rebound control appeared to be off the mark in several cases. 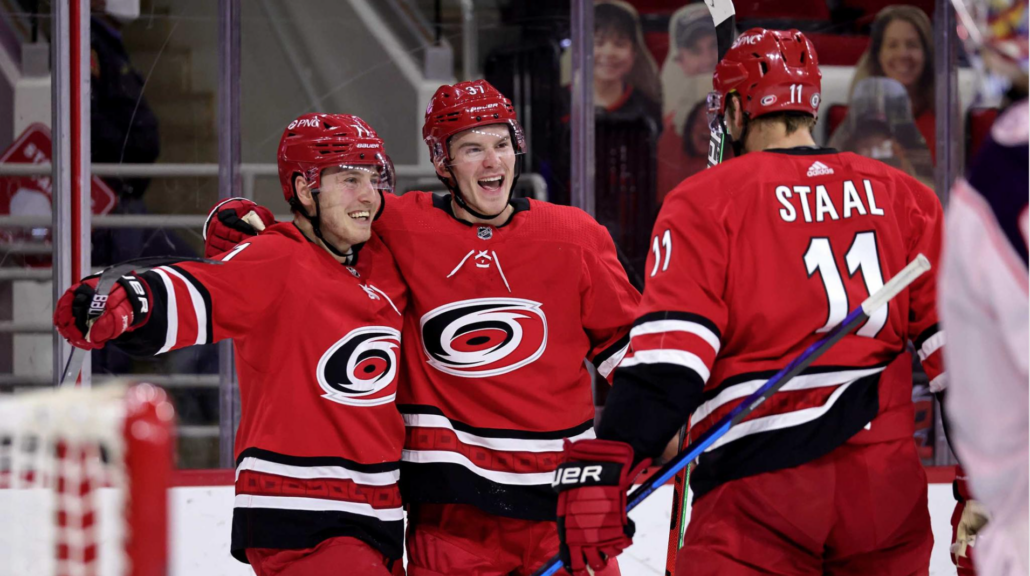 The usual first home game team introductions took place which was less formal than prior years, possibly an influence by Brind’Amour as he is all business on the ice. Everyone got a nice ovation but it was Tony DeAngelo that, to me, showed some nerves during the introduction.

As he was introduced he had that serious game face on, but when the Caniacs gave him a nice round of applause, he burst into a broad smile and said a few words to Brady Skjei who then started to laugh. Before the players came out, the entire staff was introduced individually with Tim Gleason, Jeff Daniels and, of course, Coach Rod Brind’Amour getting the loudest response.

One other thing I really like to see is where Andersen joins his teammates at the blue line for the National Anthem rather than stay back in goal.

The Islanders wound up scoring the first goal but it was over 2 minutes before Mathew Barzal got the credit.

The Islanders had the puck down low when Kyle Palmeri passed up to Barzal who got off an unbelievably fast shot. Andersen made the pad save, allowing Jaccob Slavin to clear the puck. After play stopped deep in the Islanders’ end, a lengthy video review showed the puck did clear the goal line by an inch so what appeared to be a phenomenal save was really a goal.

The Canes answered back less than 2 minutes later when Ethan Bear centered the puck to Teuvo Teravainen at the high slot while pinching along the far boards. Turbo saw Svech muscle his way to the dirty area and sent a low hard pass that Svech deflected in under Ilya Sorokin’s pads to tie the game.

Just under 5 minutes later, Jordan Staal won a draw deep in the Isles’ end, pulling the puck back to Slavo. He looked to the center but chose to go down along the near boards as he saw heavy traffic in front. He let go a hard shot that initially looked like it just hit the inside of Sorokin’s left pad and went in but during the intermission, either by a replay or Slavo saying something, the puck hit Jesper Fast before going in.

Midway in the period, Brock Nelson crunched Sebastian Aho’s head into the boards on an avoidable play. With no call made, Skjei looked for on-ice justice, going right after Nelson. After calm was restored, Skjei went to the box only to be told by the ref to go to his bench as the penalty was against Martin Necas for slashing. This even confused the announcer as it was announced the penalty was against Skjei but would be served by Necas, which was incorrect.

Later in the period, Skjei did get a call for cross-checking that was so soft of a call it was more like your wife tugging on your shirt in the back to tuck it in to look presentable. Welcome to the new NHL rule to crack down on cross-checks, which is needed.

The Islanders tied it up in the first minute of the second period on what was a defensive letdown by the Canes and a never-give-up attitude by Nelson.

Anthony Beauviller dropped a pass to Nelson as he was rushing down the right side going a stride on Skjei. As Nelson turned to get to the net, Brett Pesce picked up Nelson to thwart a good shot. Andersen made the initial save with the rebound going to his right that Nelson picked up and flicked it in to the far high side. No player can be that open in the dirty area at any time.

Jordan Martinook got the Canes back in the lead 5-½ minutes later. After a broken play behind the net where Derek Stepan tried to center the puck, somehow the puck still came up front, and just like in a preseason game, Marty was quick with a wrister shot that beat Sorokin.

Over midway in the period, Nino Niederreiter got a stride on Zdeno Chara, dropped his shoulder to turn to the goal when Chara helped Nino get flat on the ice, crashing into the net with the puck sliding in for a goal. Barry Trotz challenged the call but it was held as a good goal. While the Canes didn’t score on their first few powerplays, the man advantage did show a new look so far this season and was fun to watch.

Late in the period, Andersen Lee closed the score to 4-3 on a shot that was more luck than skill but good players make their luck. Noah Dobson was along the far boards and just flung the puck to the juicy slot area where Lee found extra space between himself and Pesce and simply swung the puck towards the net with Andersen’s line of sight blocked. Overall a sloppy period for the Canes but good where it counted, on the scoreboard. 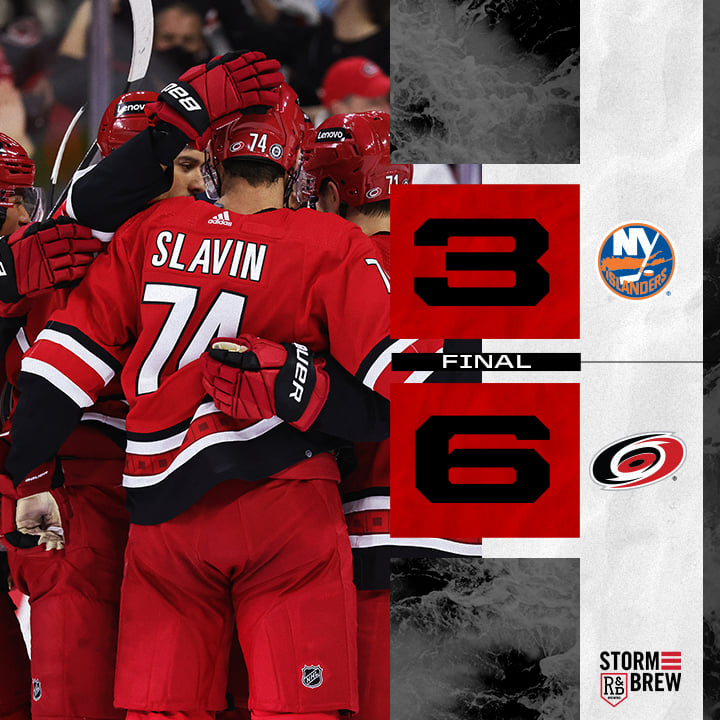 The third period belonged to the Canes as they played their best hockey, possibly getting settled in before the Caniacs and wanting the first win. Svech was feeling it all game and was a magician with the puck at times.

One new look on the man advantage was how Svech can look like there’s no option when he’s along the half boards but somehow makes a hard wrist pass cross-ice right on the stick of Turbo. On the Canes 4th powerplay, DeAngelo passed down to Svech who returned the pass right away who quickly made a 30’ pass over to Turbo inside the circle with his stick cocked and launched a laser to the far upper corner on what may have been the first real shot on net all game.

Late in the period, the Islanders pulled their goalie for the extra man to close the 2 goal lead but after a minute with the play in the Canes’ end, Barzal got caught with a vicious slash on Stepan giving the Canes one more powerplay. Trotz, who is a great coach, gambled and kept the goalie on the bench but the gamble backfired.

After a couple of long shots by the Canes that were blocked, Fishy intercepted a pass, fed it up to DeAngelo, sent a cross-ice pass to Svech who had to shoot around a defender hitting the right post to deflect in for the final goal. One other comment on DeAngelo, he may be on the smaller side for a defenseman but he plays big.

On one play being the only defender back with two Islanders barreling down, he took the man and literally shoved him to the ice resulting in a nice turnover. Not the perfect game by any means but wow—is this team fun to watch. The Islanders are too for that matter, but I can’t help think being a team with a lot of older players may work against them in time.

Next home game is October 25th against the Toronto Maple Leafs. Be there!