Cary, NC — In a game that had both teams with lineups of mostly roster players, the Canes dominated the game on the ice but the Predators dominated the scoreboard getting a 3-2 win in overtime.

If you were any bit late to the game you missed the Predators’ first goal as they scored with just 27 seconds gone in the game.

Filip Forsberg followed a dump into the corner using his body to keep Brett Pesce off the puck. Pesce provided the right pressure to keep the puck along the boards when Forsberg touched the puck over to Matt Duchene who quickly saw Ryan Johansen all alone in the slot as there was a miscue by the Canes on coverage, allowing Johansen to pick which portion of the net for the early score.

That brownish-orange mess on the ice was rust, plain and simple as some of the Canes involved in that poor coverage were playing in their first preseason game. Still, that can’t happen and Rod Brind’Amour will comment on that at the tape review on Wednesday.

The Canes’ fourth line made the most of their first shift on the ice, scoring a goal to even the score. Steve Lorentz took a face-off in the Preds’ end with really no one winning the draw as the puck slid cross-ice to the near boards. Jaccob Slavin made a calculated pinch as he saw C.J. Smith filling in on defense.

The puck squiggled out to the neutral zone with Slavo punching it back into the Preds’ end. Lorentz skated hard to the near boards, picked up the puck, took a couple of strides then sent out a hard wrister that hit Juuse Saros high on the chest protector.

Jesper Fast swiped at the rebound hitting a lob shot and with Saros down Roman Josi stood on the goal line attempting to swat the puck out with his glove but just ticked the puck allowing it to hit the ice in the blue. Smith charged the net attempting to knock it in but missed, Lorentz, after skating around behind the net was camped out of the left, hacked and whacked eventually tipping the puck over the goal line to tie the game at 2:28.

Things seemed to settle down after the early scoring, some by the encouragement of both bench coaches. Slavo was quiet but exceptional on the ice. His defensive play is just so solid, he was covering the highly talented Forsberg once, having one hand on his own stick, and one hand pushing Forsberg to the outside then taking Forsberg into the boards, forcing a turnover.

That’s textbook hockey on coverage of one of the top offensive players in the NHL. After his first outing, I’m sure Rod wanted to see goalie Antti Raanta get into some type of groove as his first preseason game was anything but impressive. The first goal wasn’t a good test as he was somewhat left out to dry but early on he was struggling. Turns out for the game, I don’t recall seeing one glove save but his positioning and blocker saves to the corners or over the glass got better.

Canes, Preds and Refs Getting Used to “New” Rules 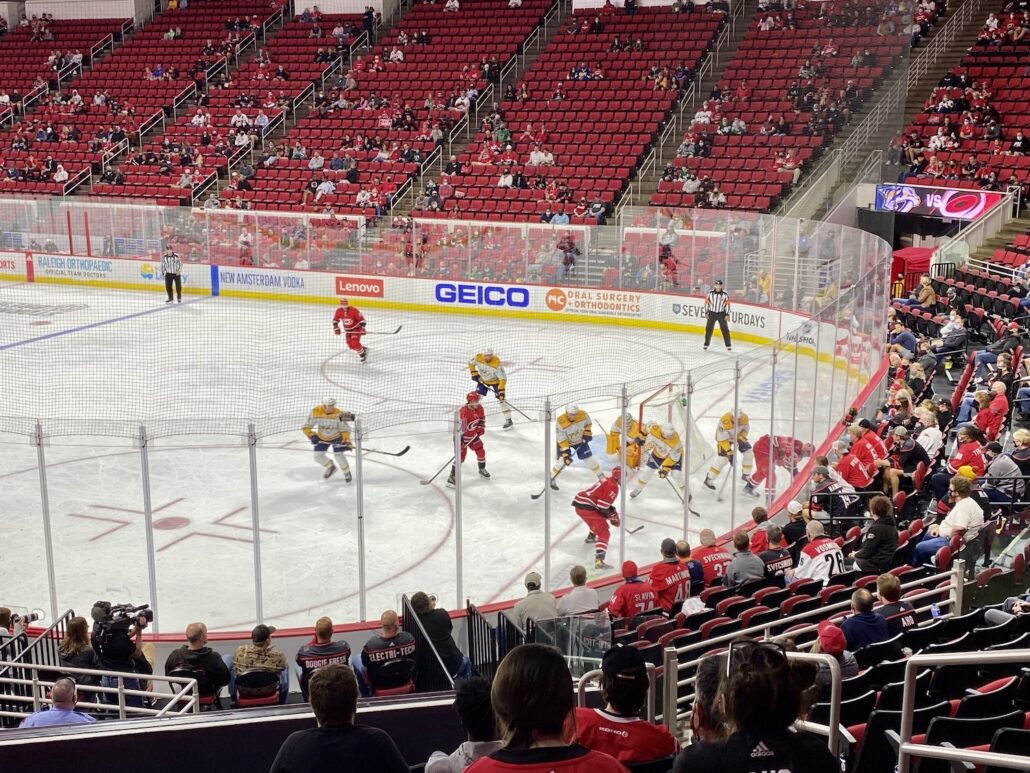 The Canes forwards were excellent in forechecking. Sebastian Aho plays with a longer stick than most forwards and uses that very effectively. Everyone knows Fishy’s offensive skills but he’s as good on defense, especially with that long stick.

Raanta came up big early in the second on two consecutive 1 on none breakaways making a blocker save on one and kicked out a pad save on the other. Call those needed confidence builders for him, the coaches and the team.

The Canes had the ice tilting for them in the second getting off a game-high 18 shots to just 6 for the Preds but it was the Preds that scored the only goal of the period. After the NHL said they were going to call more cross-checking penalties, Martin Necas saw just how tight (most of) those calls would be. On what last season would have been a push or small tap to the back in effect saying “hey, I’m on your tail” as soon a Nessy raised his stick and touched a Preds sweater in the back, the call was made.

The Preds took no time in converting on the man advantage. After another no-win faceoff, Johansen knocked the puck loose from under a 5 player pile-up to Josi. Josi carried the puck from the left point over to his comfort zone on the right.

Duchene somehow was allowed to set up in front of the goal untouched allowing Josi to make a slap pass along the ice that Duchene tipped in from 6’ out. Again, expect that to be addressed in the tape review on Wednesday. Andrei Svechnikov had a solid game and while he, along with most players were trying hard, it looked like many were going at 80 or 90%. Hits were present but not HITS like you expect to see during the season.

That’s okay as it is preseason and no one wants to start the season recuperating as sometimes it’s difficult to make up lost ground. The Canes have to make a couple of hard decisions on Jack Drury and Seth Jarvis. Both players are good, make that great. They’re highly talented and both have skills that some current roster players don’t have.

Jarvis is only 18 so it’s either make the team or play in Juniors as he’s too young to play in the AHL ( crazy rule: too young for the AHL but ok for the NHL. Good chance the Canes might have him play up to 9 games (part of the crazy rule limit) in the NHL for a real look at how he develops then send him to Juniors. Drury will probably go to The Chicago Wolves then be a call-up during the season after someone gets the eventual injury.

This is a good problem for the coaching staff. It’s a killer for the player but most will go along with what is best for their development and the team. The second period had each team take two penalties on what were consecutive plays.

Each team had a minute powerplay before the other team got a call making it 4-on-4 then another regular 5-on-4 powerplay for a minute. Newcomer Jesperi Kotkaniemi continues to be impressive and is frequently in the right place at the right time. When jumping on a rebound, he was clipped across the mouth high on a high stick.

It may be a surprise to some but KK is the same size as Svech. Granted Svech may have a BMI of .001 and muscle mass of 99% but KK is no slouch. He has the size, grit, determination and a set of skills very few possess. He’s going to be the #2 player under the magnifying glass for the Canes this season. #1, of course, will be Tony DeAngelo.

If 2 preseason games are any indication of what TonyD will bring to this team, this is going to be the steal of the league. There is no quit in his defensive game. He’s as tough as Pesce on the puck and possibly more physical than Brady Skjei. Offensively he makes up for most, if not all, the Canes lost in Hamilton.

Another nice surprise is Ethan Bear. I admit I didn’t know much about him but my contacts in western Canada gave him rave reviews and thought he’d fit in the Canes system real well. As Vancouver fans, they were glad to see him leave the Oilers.

The game settled down to mid-season form in the third with each team getting 9 shots on net, no penalties and just plain hard hockey. Late in the period, Lorentz knocked the puck loose in the Canes’end that was picked up by Ian Cole. Cole carried it into the neutral zone, making a long cross-ice lead pass to Quickie going down the right-wing, winding up and sending a hard slap shot into the near side upper corner to tie the game.

Nice to see Cole get on the scoreboard as he had a very solid game on defense which of course never makes a scoresheet but does make the sheet kept by the coaches. I couldn’t help but think of when Cole crunched a Predator down low that that was reminiscent of what he did to Canes forwards in the past. Nice pickup Don Waddell.

Preds Get the OT Goal 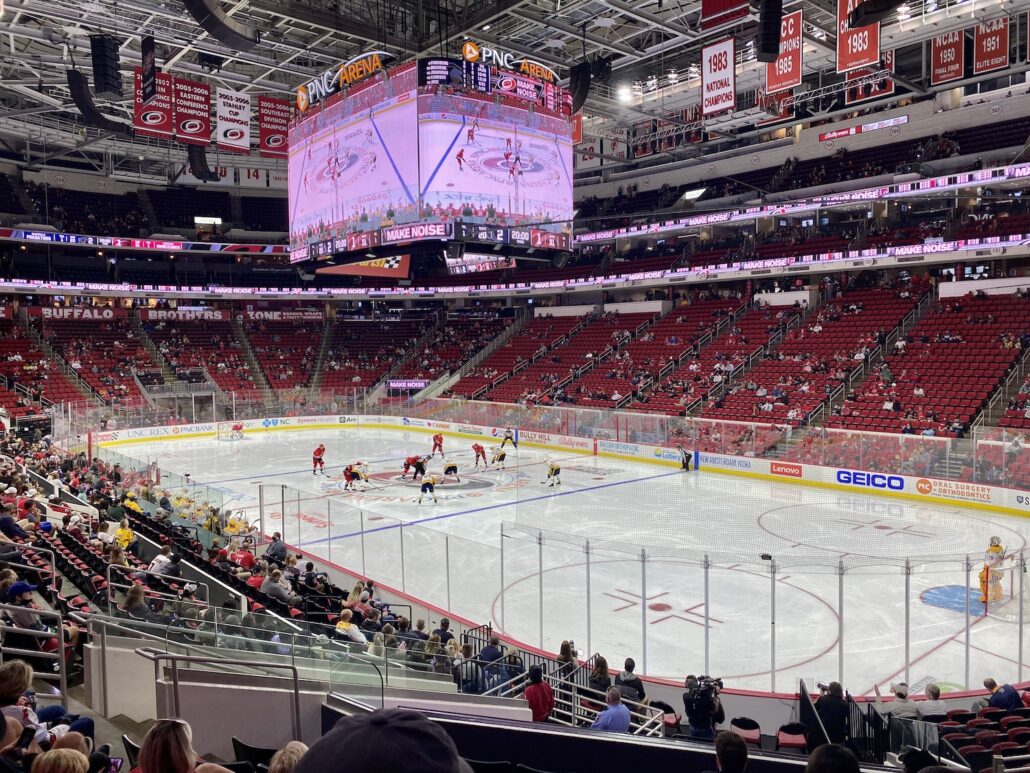 The overtime started out very good. Both teams had possession going up and down the ice. In the third minute, the Preds started a play deep in their end taking it methodically up the ice on the right side.

Johansen took the puck behind the net drawing both defenders allowing Philip Tomasino all alone in front of Raanta. Johansen slipped the puck by the Canes defenders to Tomasino who made no mistake tapping it in for an easy OT goal. Another reason there will be a review of the film on Wednesday.

The first game of the season is Thursday, October 14 against the Islanders, who are built just like the Canes. There’s a free t-shirt for everyone in attendance but hurry if you plan to go as there are just a few seats left. Be there!

West Cary’s Biggest Festival is Back