Cary, NC — And that quick, it’s over. The 2021 season came to an abrupt end with a 2-0 loss to the defending champions, the Tampa Bay Lightning at PNC Arena.

It was the 3rd consecutive loss at home for the Canes against a much better team. With the season on the line, both Nino Niederreiter and Vincent Trocheck got back in the lineup after nursing ailments. Neither showed any signs of their injuries with their play but can also say neither did anything special on the ice which could be because of Tampa Bay’s defense.

Nedeljkovic Back Between The Pipes

The Caniacs were doing all they could to get the Canes pumped up as everyone knew it was “win or go home.” Maybe it was a sign, but for the first time in this series, Jordan Staal lost the first faceoff. Overall Jordo had what had to be a season-low 21% winning faceoffs and was indicative of how everything went for the Canes during the game.

The Bolts won nearly every column in the stats except for shots on net. They dominated faceoffs 53% to 47%, blocked 22 shots to the Canes 13 and only had 12 giveaways to the Canes 23. Before the game, every Canes player as well as Rod Brind’Amour said one of the keys to the game would be to stay out of the penalty box as Tampa Bay seemed to be scoring at will with the man advantage.

Two of the better referees were assigned to this game so if a penalty was going to be called it should have been a no-questions-asked penalty. Nino got called for a slash early in the game which, fortunately, the PK units did a great job killing off. If the Bolts scored early, it could have been a longer night than it was. 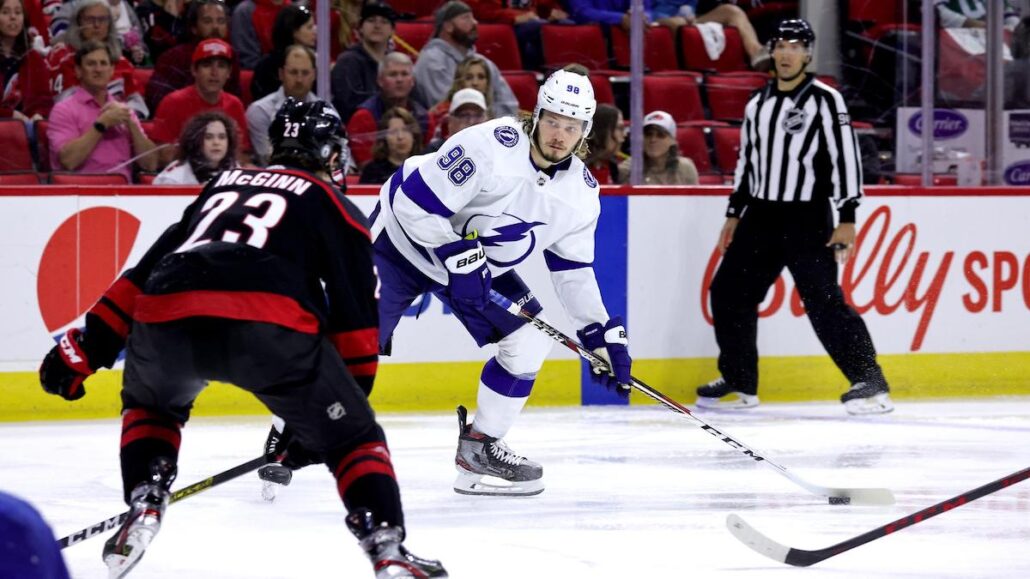 Not sure if it was a make-up call but a few minutes later the Bolts got a call for too many players on the ice that only the men in stripes saw. The Canes managed to get a shot on net but other than that, the powerplay didn’t show much. A few minutes later the first of two off-setting penalties happened with Brady Skjei and Blake Coleman drawing unsportsmanlike conduct penalties.

Watching the 4-on-4 play was actually very entertaining. The dynamics of the game really change as there is more ice and it becomes somewhat of a skill competition. Andrei Svechnikov, who hasn’t had an outstanding series, (he’s been good, just not outstanding) really showed his skill with a couple of full ice rushes and getting off a couple of decent shots.

On the other side of the ice, both Nikita Kucherov and Steven Stamkos challenged Alex Nedeljkovic’s skills in net with Ned coming up strong. Just at the final buzzer for the period, Stamkos had a bush-league push on Skjei from behind with Skjei going into the boards headfirst. Sebastian Aho took exception to that with both Fishy and Stamkos sitting in the sin bin to start the second. 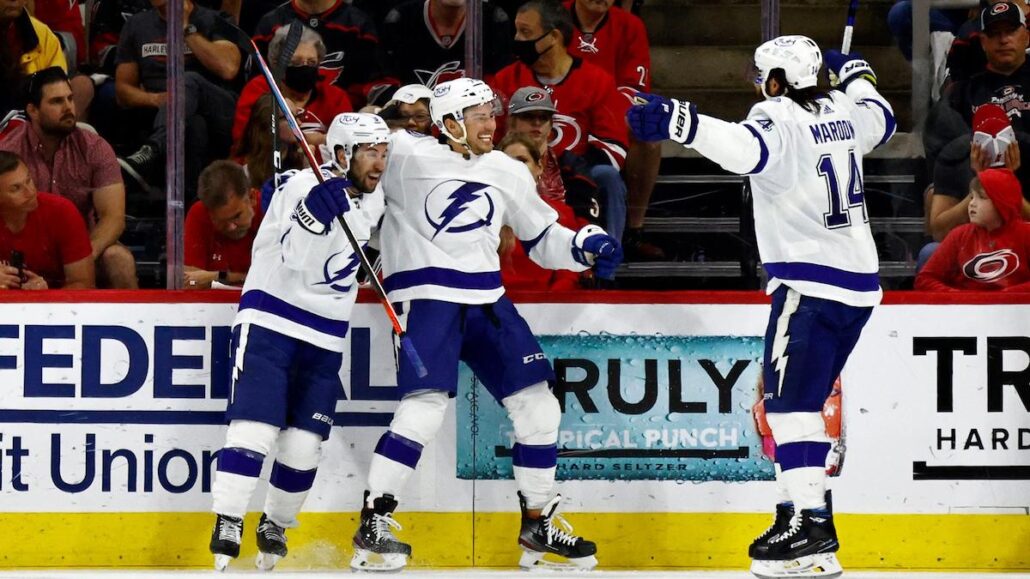 Early in the second, Jani Hakanpaa and Pat Maroon were battling for the puck along the far boards. Hakanpaa knocked the puck behind him to a teammate with Maroon still jostling Hakanpaa who stood his ground. Somehow standing your ground is now a penalty, so that gave the Bolts another powerplay.

Midway in the man advantage, as teams were making line changes, Kucherov passed over to Alex Killorn in front of the Bolts bench at the blue line. Killorn undressed Skjei, going around to the inside then passed over to Brayden Point, who made some world-class moves to flip one backhand, going top shelf on Ned for the important 1-goal lead. A great-looking goal on an absolutely horrible penalty call.

Less than 2 minutes later, the Canes got on the powerplay after Ondrej Palat got called for hooking Fishy. The Canes kept their powerplay unchanged from earlier in the night and from previous games, and the results were unchanged, too—no goal.

Turns out that would be their last powerplay of the game and for the season.

Midway in the period, the Bolts had a great opportunity to almost seal the game as they had a 2-on-1 with only Dougie Hamilton back. Hamilton was committed to the center rather than taking one player and turned out to be a great choice as he went down, leading his stick parallel to the ice to break up a sure goal.

Little plays like that go unnoticed or not remembered by most fans but all coaches on both benches take note of those great plays. Just a few minutes later with play still in the Canes’ end, on one of those defensive “you take it, I got it” confusions by the defense, not one but two Bolt players were all alone in front of Ned for a choice of who would score. But Ned could have been charged with double larceny as he robbed both players on successive point-blank shots.

The Canes managed 10 shots in the period but Andrei Vasilevskiy was just impossible to beat. As if he didn’t cover every angle, his glove was, well, lightning-fast. 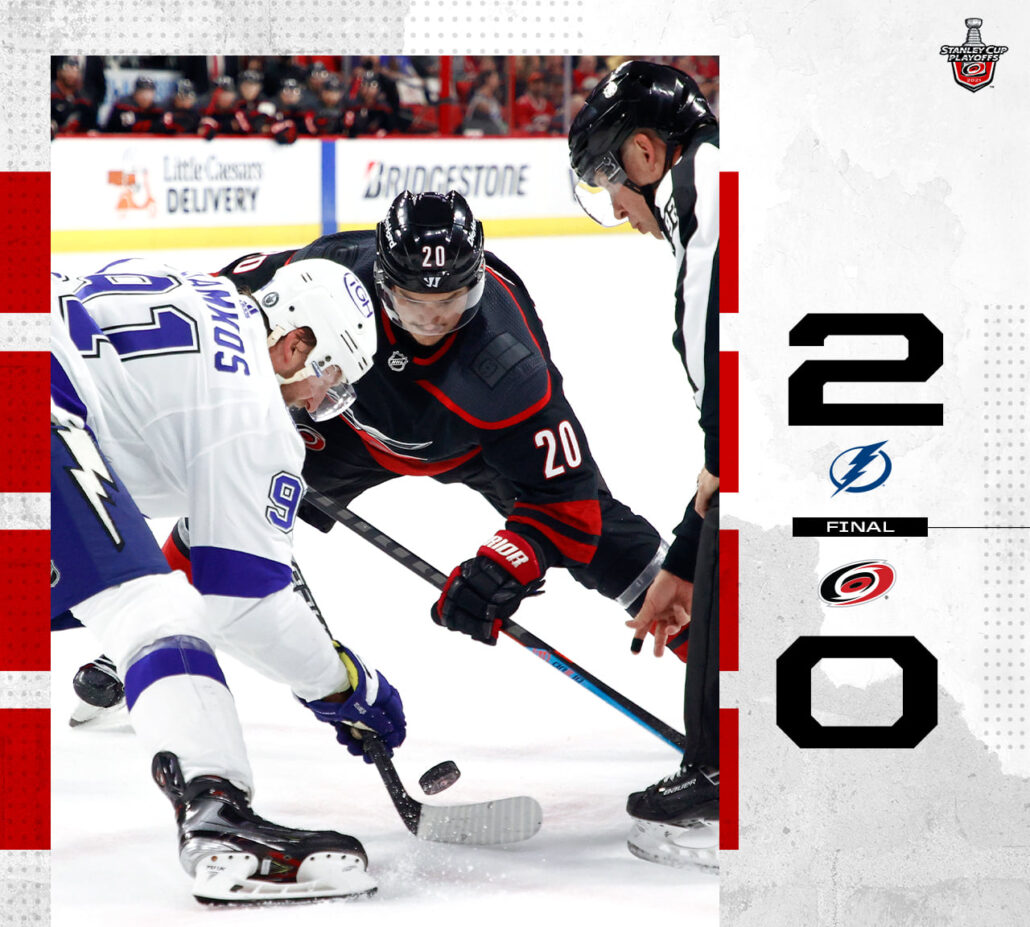 So it all boils down to the final period and how the Canes would respond. They started the game shortening the bench with the fourth line barely playing a minute.

They got in a few shifts in the second and with Nino and Troch just coming back, the fourth line had to be used just to allow for others to catch a breath. Midway in the period, with the fourth line on the ice, Morgan Geekie carried the puck out of the Canes end, passing to Jordan Martinook at center ice with the puck hitting Marty’s skate.

The good news is Steve Lorentz snared the puck on the left-wing and started up ice. The bad news is fellow rookie Ross Colton stripped the puck from Lorie and raced through the neutral zone into the Canes end.  With the puck on edge, he ripped a shot to the upper right that beat Ned that I’m sure he wanted back. Dagger. Dagger in the heart.

Almost everyone in the PNC Arena knew it except for the players and coaches in front of sections 104-105. Tampa Bay went into a quasi turtle mode, dumping the puck and sending mostly one forward, sometimes two into the Canes end. Rod pulled Ned with just about 2 minutes left and while the Canes looked great with the extra skater, Vasilevskiy was just too good.

So, it’s over and the Canes have a bunch of immediate questions to answer, such as: