Cary, NC — Mistakes. Putting the nearly $99M payroll for the Tampa Bay Lightning aside, mistakes cost the Canes game 4 of this second-round series, where they lost 6-4 after squandering a 4-2 lead.

There were mistakes of not clearing the puck out of their own zone and mistakes of too many penalties against a highly potent powerplay, certainly, the best the Canes have seen in years. Then, add in some mistakes of turnovers, mistakes of missed assignments, and even to a lesser degree, mistakes by the refs for maybe missing a penalty or two by Tampa Bay, and call it a mistake for missed opportunities on the man advantage, too.

This game will be hard to forget for the players or for that matter, anyone affiliated with the Canes. Caniacs, even casual fans that watched the game, all feel the pain.

I heard from friends in all corners of the USA and Canada, and all were stunned. The ones from Canada, especially from Toronto, had more to say about Tampa Bay’s “outright cheating” over the salary cap. That’s almost like the pot calling the kettle black.

Game Starts 4 on 4 with Mrazek Back in Net 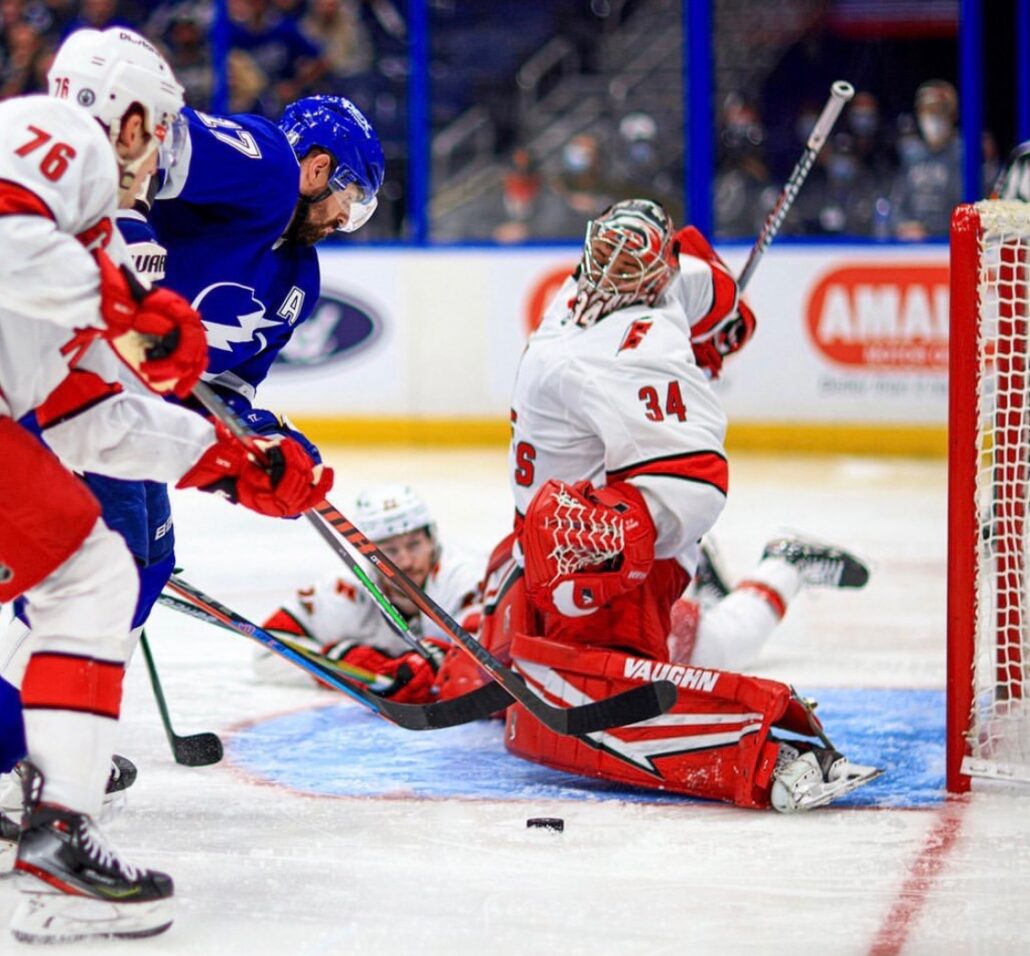 The game started out a carbon copy of the previous 3 games, well maybe except for Warren Foegele and Blake Coleman jostling for position on the first faceoff so much. Between the cross-checks, slaps at the legs and some trash talk that probably wasn’t “have a good game,” the refs sent the teams a message before the game even got underway—the whistles were not going to be gathering dust bunnies in their pockets—as both got unsportsmanlike penalties.

Jordan Staal once again won the initial faceoff and starting the game 4-on-4 was an interesting twist. Both teams are suited for 4-on-4 and it does open up the game to fast breaks and highlights if a mistake is made under those conditions, good chance it will be costly. Fortunately, no one made a mistake but those first two minutes were some of the best hockey of the game.

Having Foegs actually play in the game was somewhat of a surprise as his shoulder took a beating in the previous game. It had to be a factor in his play as Foegs likes a physical game, though he didn’t register a hit or shot all game, and was effective forechecking. 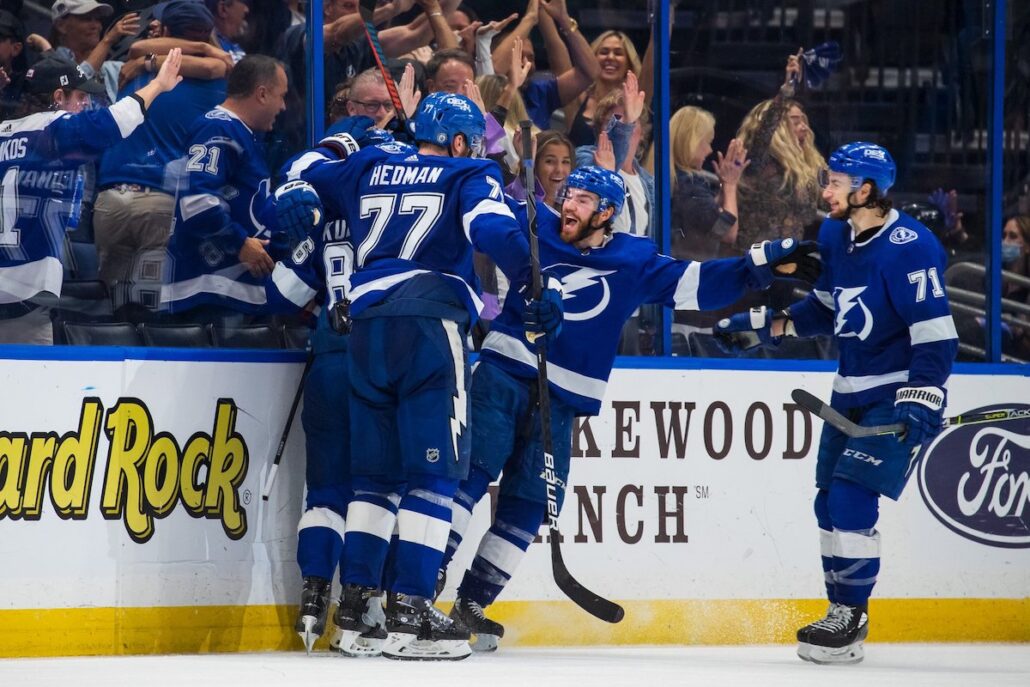 Now for the 8th time in these playoffs, the Canes’ opponents scored the first goal, making the uphill battle even more challenging.

In the 15th minute of play, Tampa Bay lost control of the puck in the Canes’ end when Dougie Hamilton intercepted a cross-ice pass. With Hamilton making that interception, most everyone started skating the other direction towards the Bolts’ end of the ice. Hamilton deflected the pass to Andrei Svechnikov but the puck bounced over his stick.

Erik Cernak managed to stop the puck still inside the blue line and made a diagonal pass to Ondrej Palat in the far circle. Palat quickly passed to an open Brayden Point for an easy tip-in. Not getting that clear is what led to that first goal.

The Canes game plan had to include “staying out of the penalty box” as the Bolts powerplay is off the charts. Hamilton and Svech both had penalties in the first with the PK units coming up huge, killing both. Petr Mrazek was in goal for the second game in a row and despite the Point goal, which he had no chance, he kept the Canes in the game making several Grade-A saves.

The second period was like going to Space Mountain at Disney World with all the ups and downs and like Space Mountain, it’s a relief when it’s over. Strap on the seat belt as here it goes.

Svech got his second penalty of the game on his first shift of the period and his first shift since his penalty late in the first. It was a legitimate penalty alright as he extended his stick to reach for the puck when he was laying on the ice after a hard check into the boards but his stick took the feet out from under Point for a tripping call.

The Canes PK killed that penalty off but the odds of that streak continuing is about as good as winning the Powerball without buying a ticket.

As Svech came out of the box he joined his linemates as the play was in the Bolts’ end. Svech and Teuvo Teravainen came away from a scrum in the corner with the puck.

Svech went to the top side of the crease with Turbo passing to him. With no shot available, Svech made a slick pass to Jordo down low who quickly passed to Turbo after making his way into the mid slot area and swiped one home to tie the game. Less than a minute later the Canes had the lead.

Jordan Martinook had the puck in the high slot with his back to the net and passed up to Hamilton on the right point. Hamilton passed left to Jaccob Slavin who calmly took a stride for a clearer lane then sent a hard wrister towards the net.

Jan Rutta was all over Jesper Fast at the top of the crease. After hitting Rutta’s skate, the puck nearly came to a complete stop when Fast eyed it. Quickly putting his stick to the puck, he whipped it in while falling to the ice to put the Canes up 2-1.

At 9:09 Martinook got a call for what really appeared to be a weak, very weak, boarding call. The odds of killing off another powerplay ran out as Steve Stamkos slammed a shot in an open goal after a shot by Alex Killorn bounced off the crossbar right onto Stamkos’ stick to tie the game at 2 apiece. 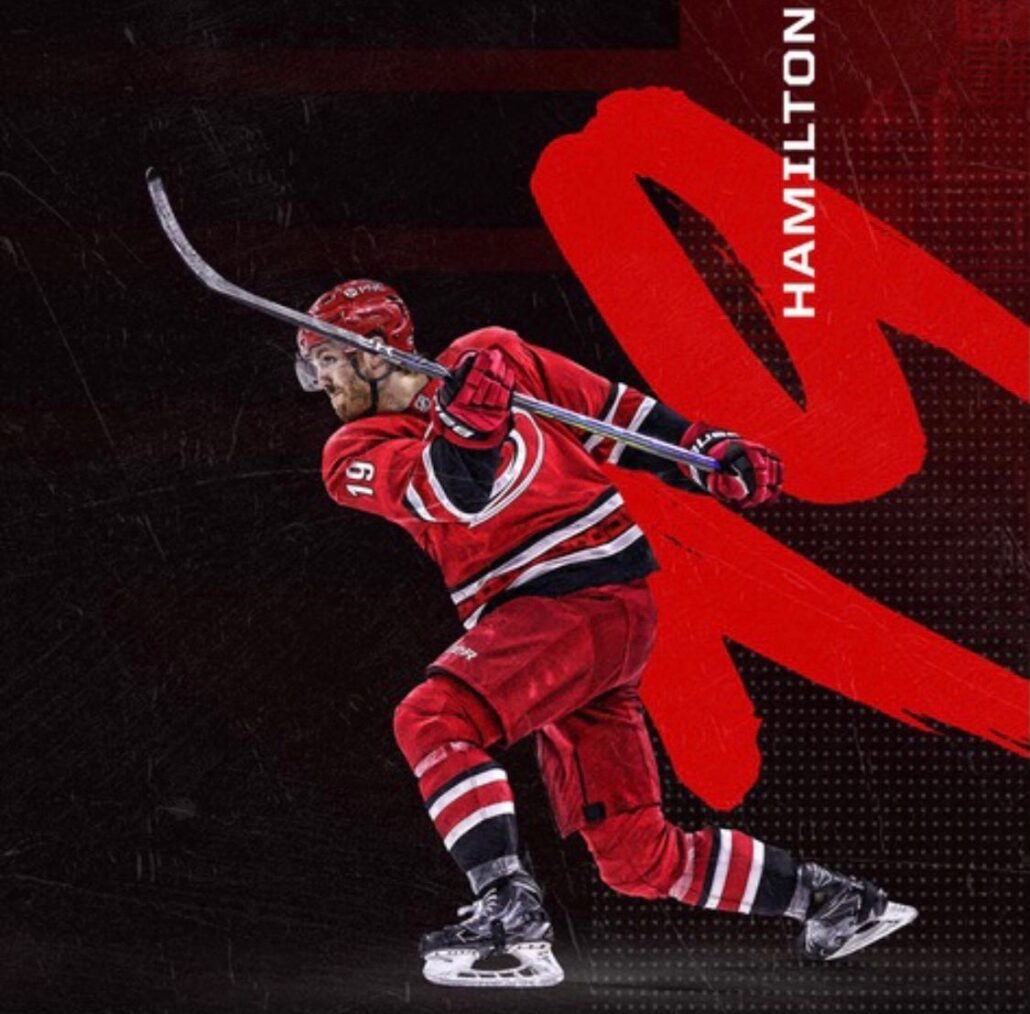 The Canes came right back which is the sign of a good team. With the puck to the right of Andrei Vasilevskiy, Svech and Turbo won a battle over 3 Bolt defenders with Svech touching a pass to Sebastian Aho along the far boards. Fishy settled the puck, took a stride North then sent Hamilton a smooth pass at the top of the slot.

Dougie looked up, saw Svech go right to the crease then sent a hard shot across the grain that gave the Canes their second lead. Two minutes later the Canes added to that lead with the fourth line on the ice. Steve Lorentz snared the puck on the slot side of the far circle passing up to former Lightning Cedric Paquette in the high slot.

Paquette made a quick pass to Slavo on the left which Slavo carried up along the boards and to the bottom of the far circle. Seeing Lorie in front, he flung the puck to the net. The puck had eyes and went in short side, up high and it couldn’t have had 3 inches of clearance for the 2-goal Canes lead.

Bolts Kick into Gear, Starting with a Powerplay Goal

Only 2 ½ minutes later the game was tied again.

Tyler Johnson, who over the years has been a Canes killer, has seen his ice time drop dramatically this season and why not, his team is stacked. While on a shift with about 3 minutes remaining in the second, he had a shot nick off of Hamilton’s skate to knuckleball over Mrazek’s left shoulder to tie the game. 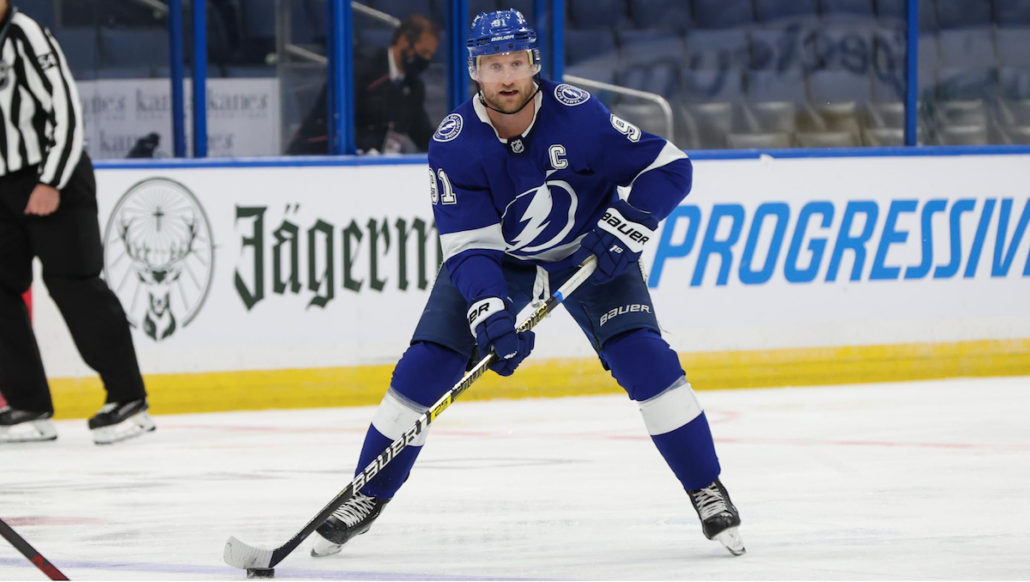 Svech got the hat trick of penalties at the 17:18 mark when he got called for what appeared to be another weak call when he banged Yanni Gourde along the back boards when the puck was frozen. As Fishy joined the scrum, he was violently cross-checked in the back that the refs could have only missed if they were solely concentrating on the puck on the ice.

The puck was loose in the Canes’ end when Staal dove to swipe it out of the zone. Jordo missed the puck with Anthony Cirelli getting possession quickly and passing down low to Kucherov in the far circle. He passed cross-ice to Stamkos and the passing was faster than Mrazek was able to keep up with. Sliding in now the wrong direction, Mrazek left 20 square feet of open net for Stamkos who easily buried it to take back the Bolts lead.

Lightning Are the Only to Strike in the 3rd 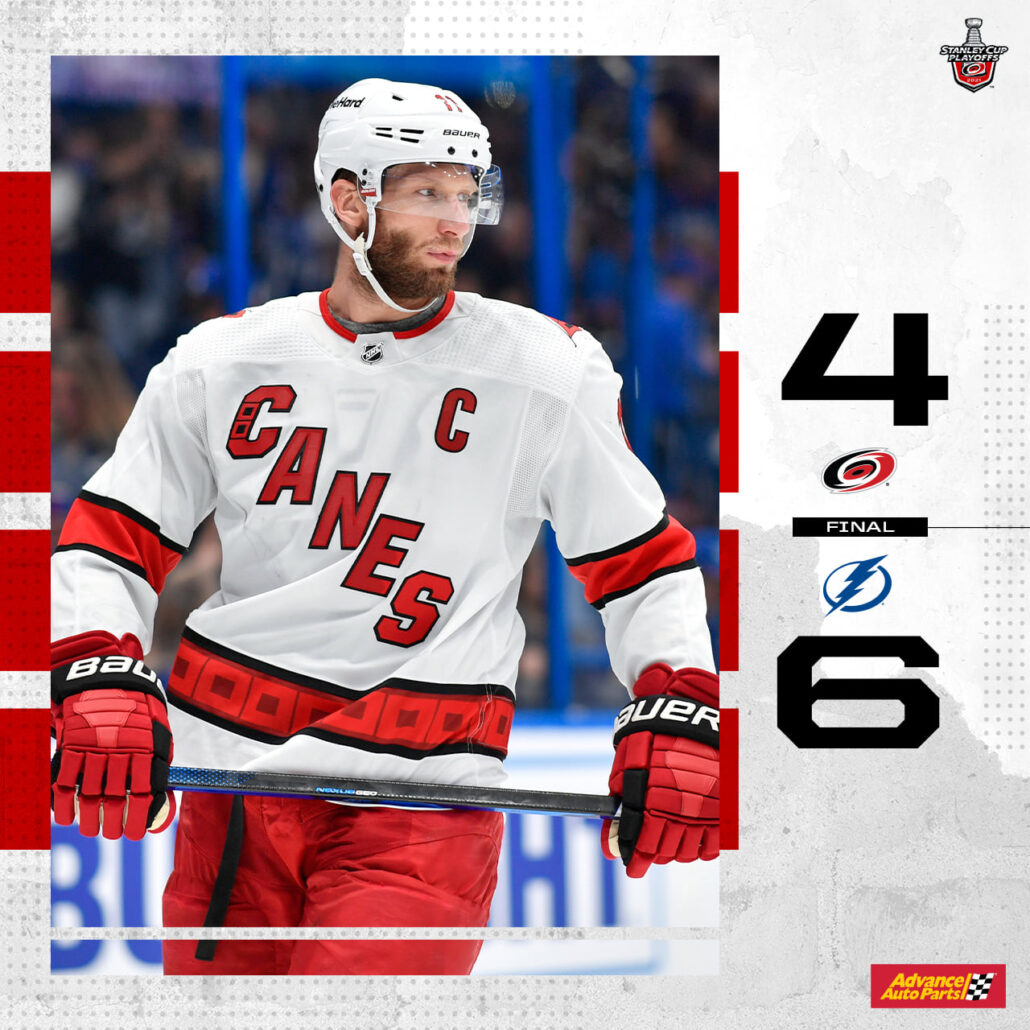 I somewhat was expecting Roddy to put in Alex Nedeljkovic for the third period but he stayed with Mrazek. Not that Mrazek was horrible, but the Canes needed a message whatever they were doing had to change. First and foremost was to stay out of the sin bin.

At 6:01 the last score for the Bolts and for the game happens on another mistake. The Bolts tried to pass the puck low to initiate a clear but a good hustle by Fishy allowed him to get to the puck first. Knowing lines were changing, Fishy was along the back boards and sent the puck up Broadway.

Beaner snared the puck inside the blue line, faking left and going right but Palat stole the puck and started a rush to the Canes’ end. Kucherov joined on the right and got the pass 8’ inside the blue line, slamming home the insurance goal from 35’ out. Even before that goal, the Bolts rarely, if ever had more than 2 forwards in the attacking position which was reflected in their game low of just 4 shots on net for the period.

The series returns to Raleigh with the Canes in a 3-1 deficit in the best of 7 series.

Special teams, powerplay and PK, need to regroup, view the tapes and find a way to improve before game 5 on Tuesday at PNC.

Story by Bob Fennel. Photos courtesy of the Canes and Lightning on social media. See more Canes coverage on CaryCitizen.