Cary, NC — Since the Town Council had not met in a public, televised meeting in a full month, there was much to discuss in the most recent one, held on Thursday, May 27.

Topics included the appointment of a new Town Attorney, the official adoption of Juneteeth as a Town Holiday and several proposed developments.

The vote of the night that was not unanimous was the vote which approved, 5-2, the Twin Lakes proposed which will allow apartments to be built on land initially zoned for retail and office space. 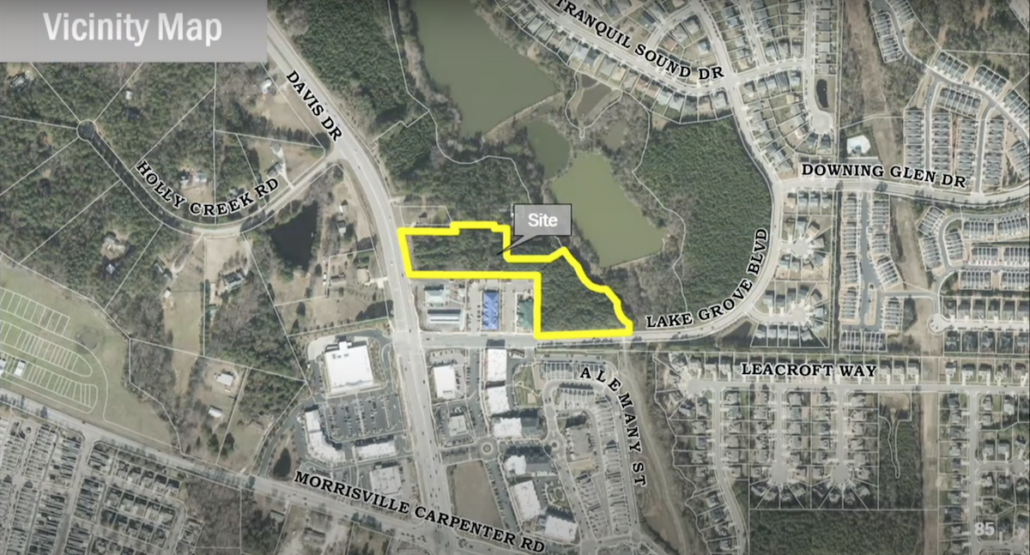 During the January 14, 2021 meeting of the Town Council, a public hearing was held for the Twin Lakes proposal to bring 230 multi-family units to 5.59 acres of land located at 10152 Lake Grove Boulevard. The request was met with questions by the council and 74 comments of community concerns related to traffic, unit heights and more.

Since then, the Town staff worked with community members and the developer of the project to tweak the standards which now include:

The discussion following the presentation of these updates included a majority of comments leaning toward supporting the revised proposal, with dissenting thoughts coming from Mayor Harold Weinbrecht and Councilmember Ed Yerha.

“I like the greenway a lot. I don’t like streetscape and buffer reductions. And we’re abandoning, in some respect, the original intent of the PDD,” said Mayor Weinbrecht. “I feel that I can’t support more apartments as the compelling reason.” 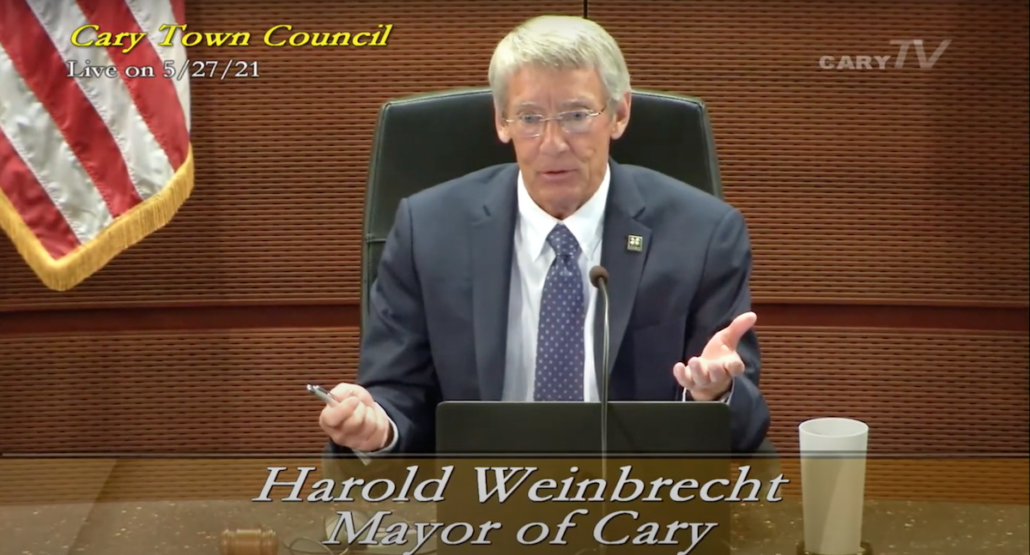 Councilmembers Jennifer Robinson and Jack Smith each expressed their liking to the structured parking and Robinson said she felt that multi-family residential was a fitting and transitional use for an area that is adjacent to a gas station and a Pizza Hut.

Mayor Pro-Tem Don Frantz acknowledged that there are trade-offs and at the end of the day for him, “the pros outweigh the cons.”

The Twin Lakes proposal was officially approved by the council in a 5-2 vote. For further information on this project, you can visit this page summarizing the amendment.

A 30-minute discussion of a proposed redistricting map included a decent amount of debate amongst the council as well.

State law requires cities that have electoral districts (as Cary does for its council seats except for Mayor and At-Large representatives) to look at them every 10 years when new census data is available.

These districts are required by the U.S. Constitution to be “substantially equal in population” so that each person’s vote count’s about the same as any other. As the newly appointed Town Attorney put it, redistricting is the process to ensure this concept is upheld continuously.

Legally, the council can initiate redistricting of Council electoral district boundaries at any time, in addition to the statutorily mandated review required after receipt of census data. At the May 13, 2021 Quarterly Meeting, Cary’s Redistricting Team presented options for maps outlining new, more balanced Council districts that can be implemented in time for the October 2021 election.

Based on the meeting discussion, the below redistricting map is proposed and was the subject of the public hearing. 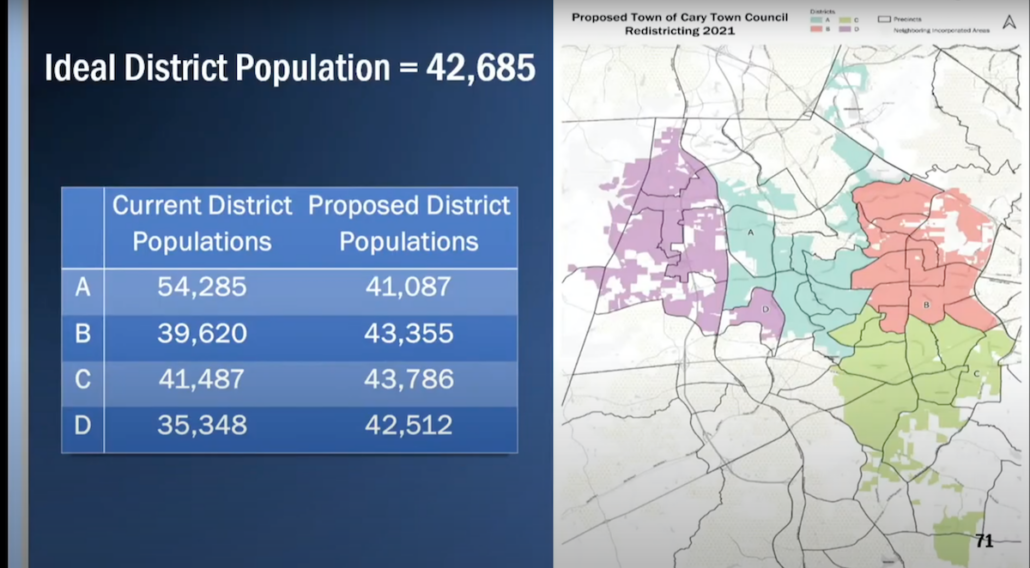 From the public, there were no call-in speakers, but 12 community members submitted comments of various concerns and support. Some favored 1 of 2 map options for various reasons. One requested a delay in a final decision, another said that both map options go against the stated goals, and some opposed being relocated to a new district along with a new representative. Additionally, one wished to have an option that does not split neighborhoods.

Several councilmembers chimed in, including Frantz who candidly said redistricting is never easy on anyone, elected officials or staff tasked with the maps and policies.

“This oftentimes can be a political decision, but I am thrilled, proud and love the whole A-political process we go through every time we do this,” said Frantz.

Another key commenter during the discussion of the map was councilmember Jack Smith who was not thrilled that two map options and further information were not presented to the extent that the council discussed and saw at their last quarterly meeting.

“I believe that we missed an opportunity to be better at full disclosure,” said Smith.

His primary concern was that map option 1 had an impact for 5 precincts versus 17 precincts in option 2 which was the only option presented in the meeting. No action was taken and a final map is expected to be presented to Council for approval on June 24, 2021.

For further background on this proposed development, see this previous coverage which includes council discussion and 78 commenters in opposition to the development.

Only one Cary resident called in live during the meeting’s public forum to speak against the plans for annexation and rezoning along Lilly Atkins road. The speaker’s name was unclear, but he submitted a petition to the council with signatures from 56 nearby households to the project that he claimed would be impacted. Speaking on behalf of the group, the man said, “We have no objections to what people can do with their own property,” as long as it’s within the confines of the law.

“With the existing law saying that the area in questions cannot be developed at a higher density than 40,000 square feet per unit, we the people of the Town of Cary wonder why there’s been such an effort to disguise and conceal the true density of this area,” said the speaker.

He mentioned that while much of the literature, including prior council presentations, says that the project calls for 2 units/acre, with a listing of 6,000 square feet as a minimum per unit, that could mean a density of 7.2 units per acre.

“This is certainly not an area that needs a high-density project of 7 units per acre,” he said in concluding, as he asked the council to vote no when it comes time to decide on the requests.

While typically a stickler for not directly responding to members who raise questions or concerns during Public Speaks Out, councilmember Jack Smith had a few words to say on the Lilly Atkins rezoning.

“Since this all started, there’s been a lot of interaction with the community and people in that surrounding area and I was feeling quite comfortable that the major concerns were addressed,” said Smith.

He thanked those who have participated in the feedback process and the subsequent changes before saying, “It’s important that we understand there were multiple perspectives out there.” 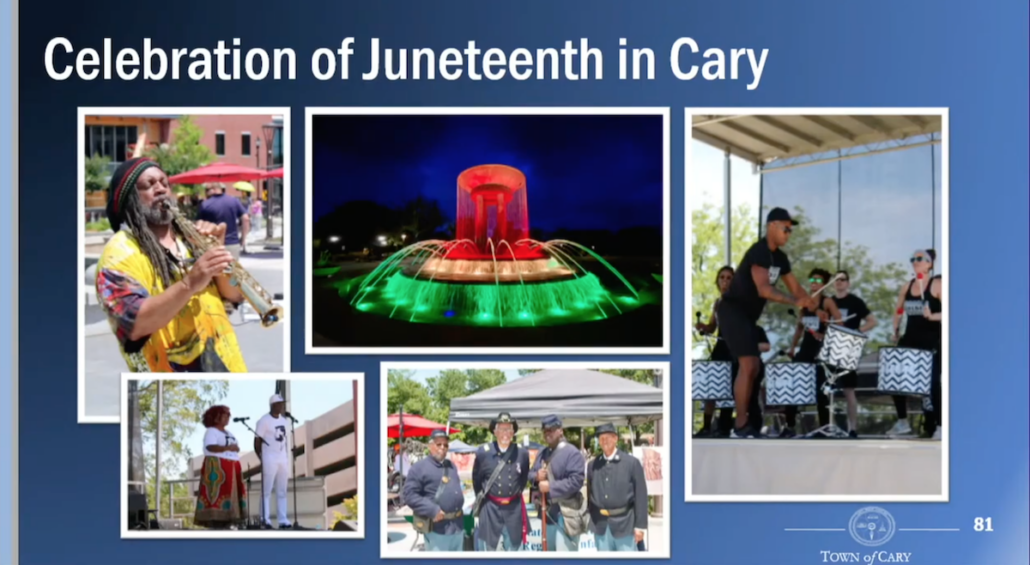 According to a Cary Human Resource Strategist, Rashonda Harris, the council discussed officially observing the Juneteeth holiday in their November 2020 quarterly meeting. This would make June 19th equivalent to all other paid holidays for their employees.

Harris said this is one way for the Town to “demonstrate Cary’s commitment to foster a diverse and inclusive workplace.”

Highlighting the history of the June 19th holiday, Harris says the day commemorates the emancipation of enslaved African Americans in the United States. It’s a day to celebrate freedom, achievement, liberation, resilience and fortitude.

Due to the State of North Carolina not recognizing Juneteenth as an official holiday, the council had to put it to a vote whether or not to officially begin its yearly observance as a paid Town holiday.

As Mayor Weinbrecht puts it, the council did so “enthusiastically and unanimously.”

Cary hosted its inaugural Juneteeth celebration in 2019 and plans for the 2021 celebration are underway to include both in-person and virtual events. 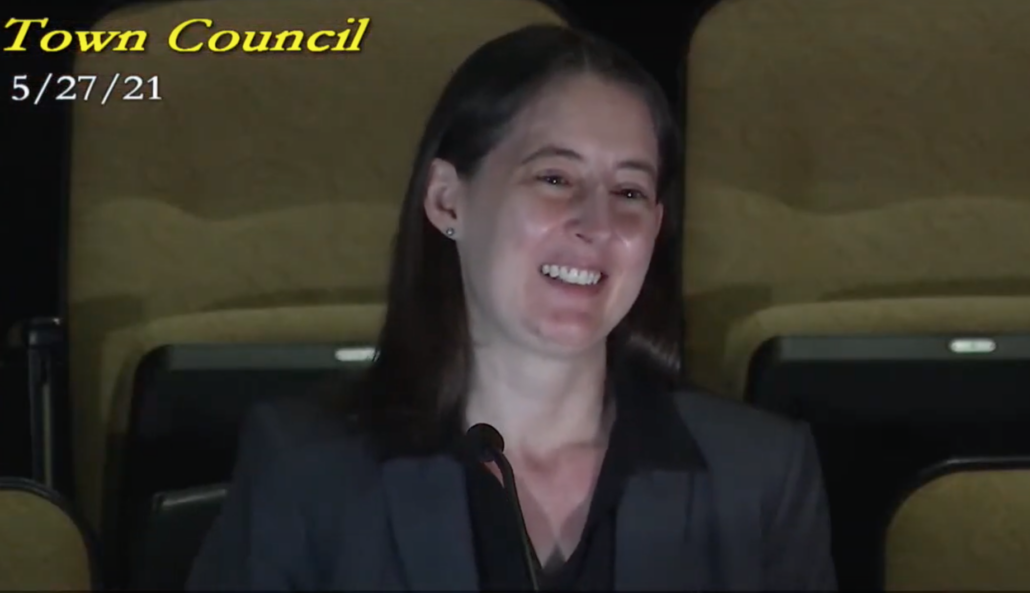 Lisa Glover, who previously served as Assistant Town Attorney under the leadership of the now-retired Town Attorney, Christine Simpson, was officially been appointed as Cary’s new Town Attorney in the meeting. Several council members and the Mayor shared kind words about the new appointee.

“I can tell you that we searched, we interviewed and she is the best of the best. We had her right here in-house and we are so fortunate and so blessed to have Lisa on our staff as our Town Attorney,” said Mayor Harold Weinbrecht. 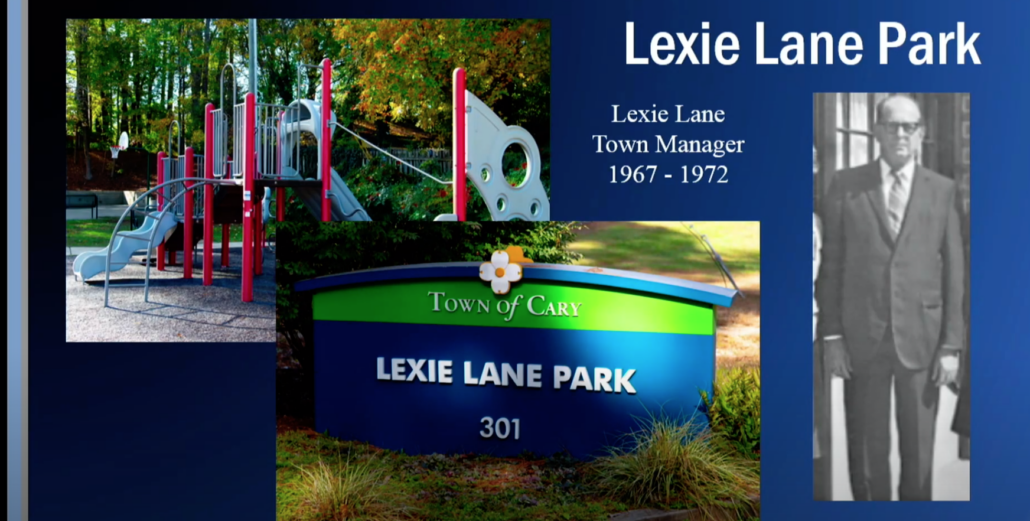 “Cary’s Parks & Their Namesakes” was the theme of Ed Yerha’s May history moment where he takes a piece of Cary’s 150-years of history and shares it in a monthly segment during a council meeting.

During his presentation, Yerha shared that Cary had no official public parks until 1967. He took a drive down memory lane to connect the names with the faces of the folks many of Cary’s parks are named after, such as R.O. Heater, Fred Bond, Lexie Lane, R.S. (Dad) Dunham and more. Take a look at the full presentation in this 9-minute YouTube video.

In addition to the above redistricting map public hearing, two more were held with all actions deferred to later meetings or pending review by the Town’s Planning & Zoning Board. These included:

The following nine items were approved with a single, unanimous vote of the council. For further details on any item, view the documents and summaries included on the meeting’s Action Agenda.

To see the May 27, 2021 Council Meeting in its entirety, see the video recording on the Town of Cary YouTube Channel.