Cary, NC — The big news should have been the return of Jaccob Slavin after missing the last 3 games, but joining in the big news was Martin Necas scoring 2 goals and Jordan Staal knocking in the game-winner in overtime.

The Canes powerplay finally clicked, the Canes had a goal called back and, despite the entire team and Slavo playing at what appeared to be 80%, the Canes gutted out a 3-2 win over the Nashville Predators. This secured the 3-2 series lead, giving the Canes an opportunity to close out the first round in Nashville on Thursday.

Slavin Hits the Ice, Much to the Joy of Caniacs

Seeing Slavo take warmups was a good sign and the fans gave him a great welcome. Earlier in the day, Rod Brind’Amour said hints were “looking good” for Slavo to play but only would know for sure after pregame warmups so when players came out to start the game, once Slavo hit the ice, the decibel level rose a few points.

I thought Roddy would start Slavo to get the crowd into the game early, not that the Caniacs needed any boost, but for the fifth consecutive game, the fourth line started along with the second D pairing. Once Slavo hit the ice, the Caniacs once again let him know their appreciation which a quick glance over to his defensive partner, Dougie Hamilton, looked like Dougie said something to Slavo with a big grin and one can only imagine what the good-natured Hamilton said.

Getting the energy line out early was a smart move as they sure can get the Caniacs engaged further. In the first 30 seconds, the line of Steve Lorentz, Brock McGinn and Jordan Martinook won the faceoff, delivered the game’s first hit and got off the first shot. An excellent shift that had to please Roddy.

The first line and top D pairing then came out with Slavo registering his first hit of the game and I’d bet the only advice Roddy gave Slavo was to limit hits as they can take a toll on the giver as well as the receiver. The Canes dolled out a game-high 66 hits which means it was part of their playoff game plan while the Predators dished out 40.

Rookie Steve Lorentz led all players with 8 hits with many using every ounce of his 204-pound frame. Lorentz’s grandfather, Jim Lorentz, won a Stanley Cup with Boston back in 1970 but spent most of his career with Buffalo.

Midway in the period with the fourth lines back on the ice, after the Canes couldn’t clear the puck from their zone, Roman Josi had the puck on the left point and simply tossed the puck at the net. Yakov Trenin was in the line of the puck. As he turned and saw the puck aiming for his head, he flinched, pulling his stick up to protect his face with the puck glancing off his glove and fluttering past Ned for the 1-0 lead.

That fact that Trenin was so open had to be questioned and may have been a factor as to why Jake Bean played less than 8 minutes in the entire game. Shortly after that goal with the Canes pressing in the Preds zone, just as the whistle stopped play in the near corner, Luke Kunin and Andrei Svechnikov started muscling each other when Matt Benning came over to put an arm around Svech’s neck.

Good buddy Doogie, as Svech calls him, came in to deal with Benning in a gentlemanly way but Benning started to make something more of the confrontation. After the refs restored calm, Svech, Kunin and Benning all got roughing minors, giving the Canes a powerplay.

Roddy put Necas in Svech’s position, which turned out to be a smart move.

Teuvo Teravainen had the puck near the half boards and passed up to Hamilton up top. Dougie passed over to Necas on the far side, had a good look and took the shot. The puck hit a body in front but Dougie quickly picked up the loose change and passed back to Necas who wasted no time. Cradling the puck for a wrister, he picked a spot and buried it to tie the game at 1. 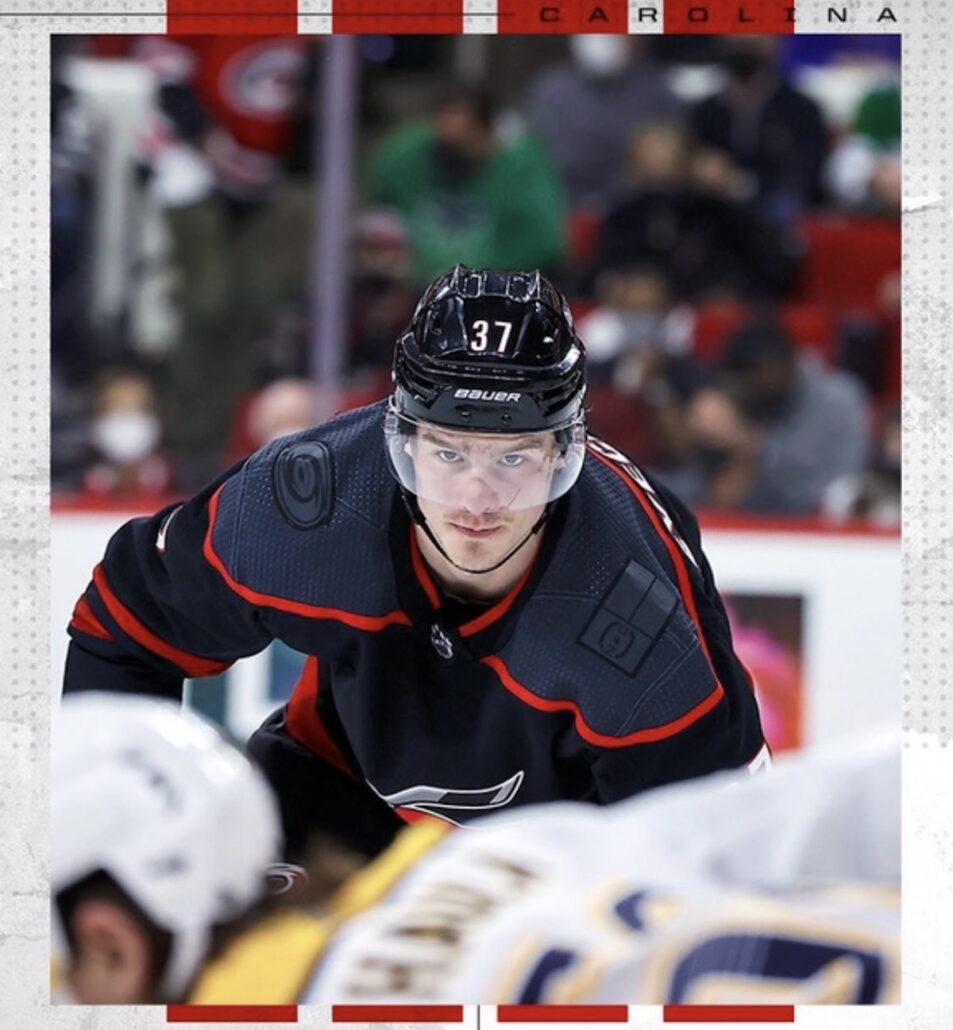 The second period had the most shots by both teams—14 for the Canes and 10 for the Preds which may be very proportional to the possession time. While I didn’t check possession time, it really appeared the Canes had the puck a good 65% of the time.

The fourth line also started off the second period with Lorentz once again winning the initial faceoff of the period. The Canes entered the Preds zone with speed when Brett Pesce laid a soft drop pass that was missed by Lorentz and picked up by Colton Scissons who made a dash to the Canes’ end.

With only Hamilton back and Trenin on the left, Scissons held the puck up until Dougie laid down his long body but flipped the puck to Trenin who went short side on Alex Nedeljkovic for a 2-1 lead with just 53 seconds gone in the second. The Canes were pressing and maybe holding the stick a little too hard as whatever they were doing just wasn’t providing great scoring chances. Don’t confuse that with a quit in their game, maybe a bit of frustration, but certainly no quit.

Several players were having an excellent game, Brock McGinn had his usual silent but effective game, Pesch and Slavo were, well they were typical Pesch and Slavo. Hamilton had a much better game than the last game. Jordan Staal seemed like a man among boys and Vincent Trocheck has been the Chad LaRose of this team, getting under the skin of anyone in a yellow sweater but also contributing in a big way.

Ned might have wanted a second look at that second goal but it was a 2-on-1 and the success percentage on those is huge but despite that, he was really on his game. With so much on the line, both teams were super careful not to take a penalty. The Canes had the only powerplay of the period, got two shots off but just couldn’t convert to tie the game.

The biggest controversy of the period was when there were 6 players in front of the Preds goal when Slavin had the puck on the left point. He flung it into traffic with the puck knocking in off a skate. Preds coach John Hines asked for a video review and I’m now convinced the NHL in Toronto has different videos than what’s shown at the PNC Arena as every video I saw, which was from 4 different angles, showed all Canes were out of the crease.

If any goalie interference occurred, it was earlier in the play with the Nashville player initiating the interference, which by rule is not goalie interference, and mostly when the goal was scored Juuse Saros was free and clear of anyone. Did I mention the 12,000 Caniacs also didn’t approve of that call but one man in the arena, that being Rod Brind’Amour, was about as animated as he’s been in a long time. 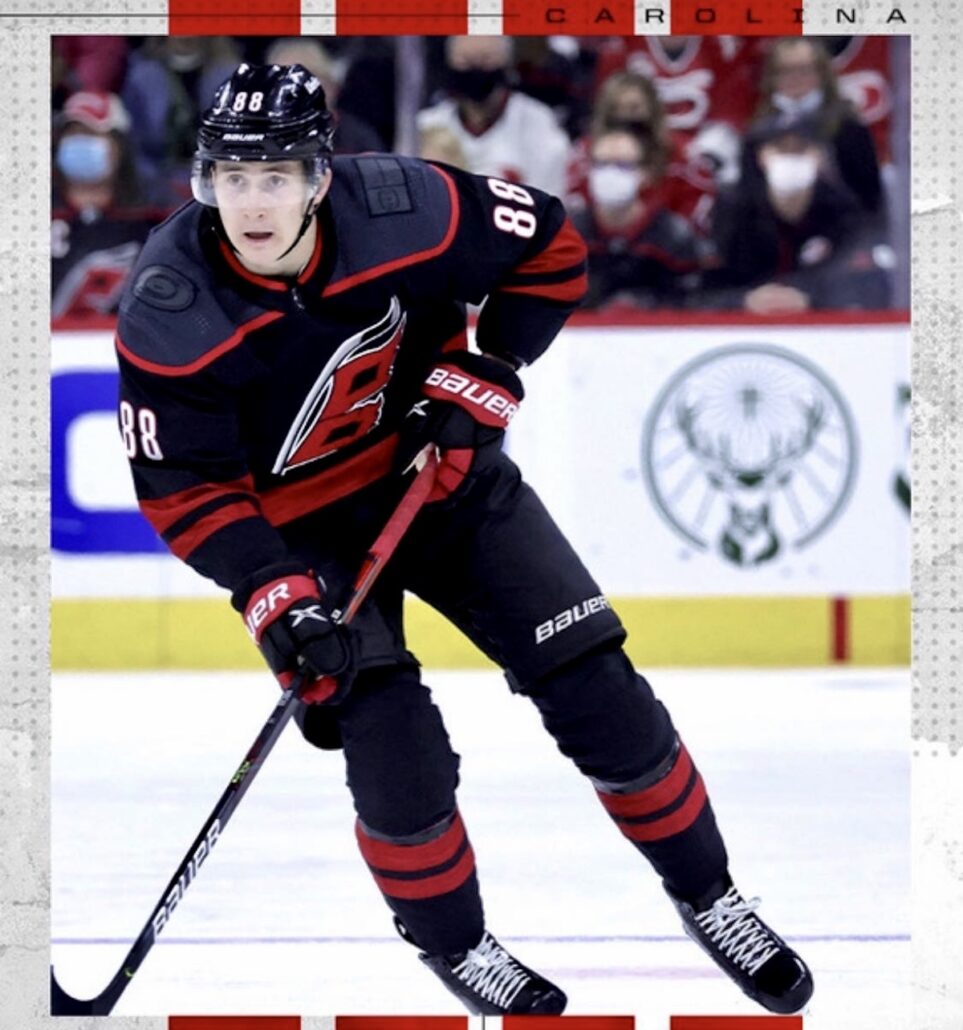 The start of the third is not what Rod or the Caniacs were expecting. The only way I saw it was the Canes were flat. Not much emotion, passes were off, not sharp or crisp and playing cautiously is not Canes style hockey. Something had to change as time was running out.

Warren Foegele took exception with a shot to the legs after a whistle and as usual, the retaliation got the call, giving the Preds a powerplay. The man-down defense came up huge, stopped everything, and with the Preds hard-pressed to have even a minute in the Canes zone. To me, that was the turning point of the period, if not the game.

From that point, the Canes started playing Canes hockey—passes with a purpose, checks with an exclamation point, shots that challenged Saros, forechecking and speed. Speaking of speed, at just under the 13-minute mark of the third, with fresh lines all around on the ice, Slavo had the puck in his own end and passed right to Necas at his own blue line.

With time and space, Necas built speed, went through the neutral zone and put it in 4th gear, blowing by a forward going down along the far boards. Then, kicking it in 5th gear, he passed on the right between a defender and the boards before shifting into 6th gear. He turned his wrists to cradle the puck to the ice and, in one motion, goes down on one knee slinging the puck into the net for a wraparound to tie the game and further energize the Caniacs.

The game ends in a tie and for the third game in a row heads into overtime.

Staal Wins It In OT

As much as he hated to do it, my buddy Hunter had to leave the game as he had to be in the operating room at 6 AM and only left in consideration of the person being operated on, who Tripp Tracey will say is the newest Caniac.

The OT started the wrong way for the Canes as with just 56 seconds gone, Brady Skjei got called for holding Mikael Granlund. Again, I need that Toronto tape as I’m not sure that was a legitimate hold, certainly not one that could have meant a game.

With the Canes’ D thwarting every attack and clearing the puck, on one more Preds entry, Alexander Carrier blindsided Sebastian Aho, evening the sides for a 4-on-4.

Staal won the faceoff that Svech got along the far half-boards and passed up to Slavo. The best thing to go for on a 4-on-4 is quickness and possession. Slavo quickly passed to Pesch on the right point who settled the puck with Svech and Jordo in the dirty area. Pesch sent a hard shot that Saros made a blocker save on. With the puck loose in front, Svech missed a swipe at it but Jordo hit it out of the air, bouncing the puck in for the game-winner at 2:93 of the overtime.

Not the prettiest win but a win, but nonetheless, the Canes are off to Nashville to close out the series on Thursday. 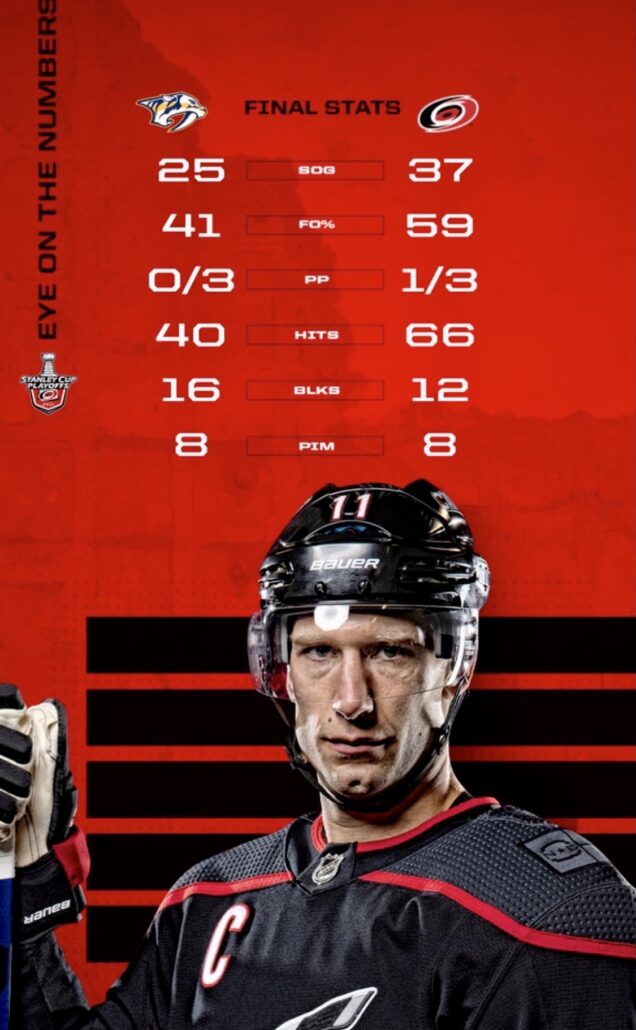