Cary, NC — As Yogi Berra coined the phrase, it was like deja vu all over again as the Nashville Predators won in double overtime for the second game in a row. This time it was by the score of 4-3, to tie the best-of-7 series at 2 wins each.

For the third game in a row, Jaccob Slavin was not in the lineup and once again, Brett Pesce and Brady Skjei were putting in yeoman’s work with personal bests of 40:16 and 39:02 of ice time with Dougie Hamilton not far behind at 33:28.

Having Slavo out is beyond huge and knowing his level of commitment, level of professionalism, and what he brings to the team on the ice and by example, just can’t be replaced by extra minutes for a few players.

Every defenseman has played great these past 3 games but what Slavo brings to the game is unbelievable.

Fatal Turnover Gets Preds on the Board First 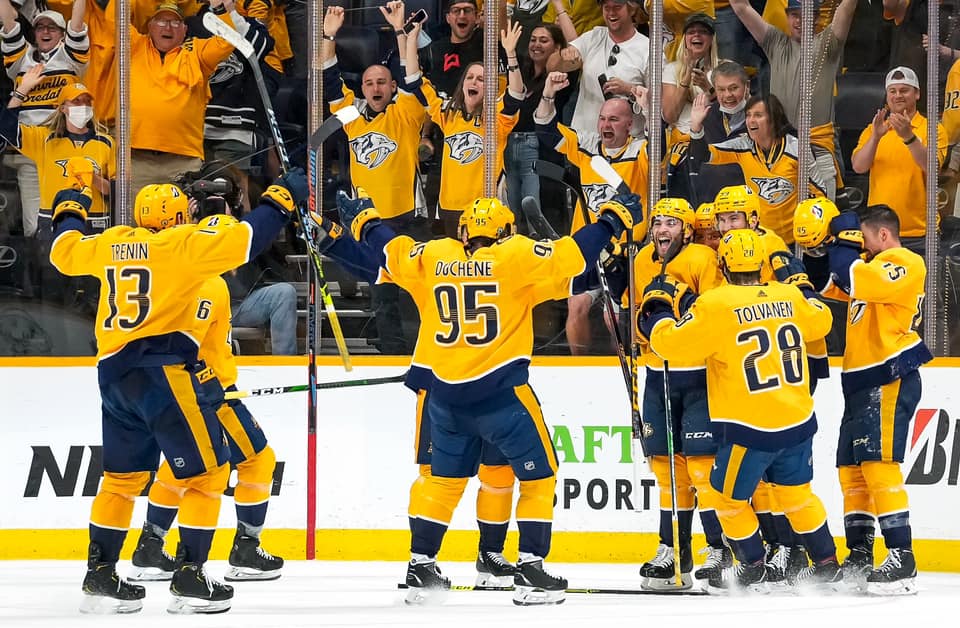 Maybe this was the plan Predators coach John Hines drew up because it wasn’t the plan of anyone or anything related to the Canes.

The Canes survived the first push by the Preds and with both teams needing line changes, you would have thought there was plenty of time to make a pass to the tape. Dougie Hamilton anticipated Jordan Martinook to continue skating in the neutral zone, as it appeared he slowed up to look to the far side to see if his replacement was ready and that pause allowed the puck to go to no man’s land. It was picked up by Ryan Ellis above his blue line.

Ellis quickly passed up to Luke Kunin right at the Canes’ blue line. He entered the zone going down along the near boards and passed left to Mikael Granlund at the top of the circle. Granlund tried to stickhandle between Brett Pesce and Brady Skjei but lost possession of the puck. Kunin picked up the loose change and backhanding one past Alex Nedeljkovic with just 57 seconds gone.

The Canes settled down after that fatal turnover and started playing their game. They got better possession and were throwing pucks at the net all while being responsible to not take a penalty.

Necas Sets Up Trocheck for the Equalizer 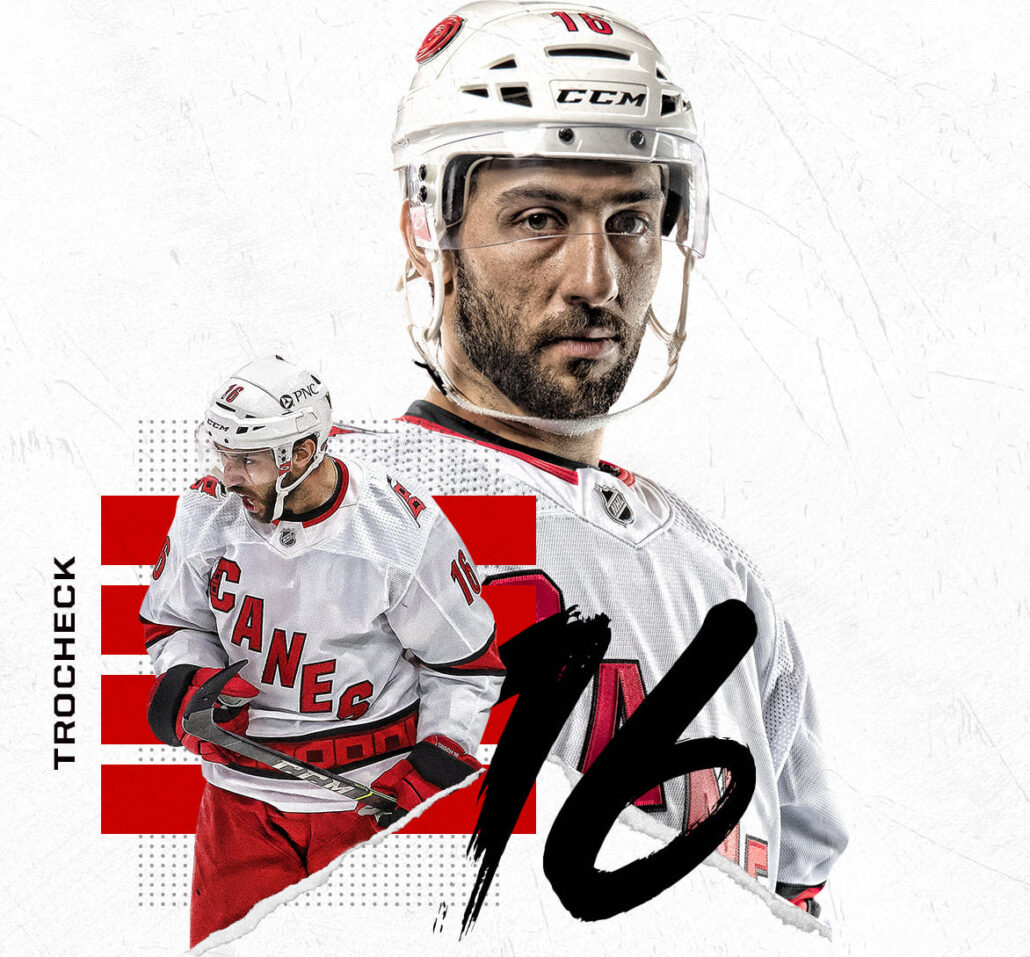 Late in the period, the refs called Andrei Svechnikov for a double minor penalty for a high stick that drew blood. Only when a double minor or 5-minute major is called (sounds ridiculous but that’s the current rule) can the play be reviewed.

Svech tried to save the refs the time as he’s an honest guy and told the refs he never touched the Preds player and replays proved Svech was right and the penalty reversed. Give the refs credit for deciding on the review and getting it right.

In a twist on the last couple of minutes being the bane of the Canes, this period was the start of gains for the Canes. It all started in the Canes’ end with Nino Niederreiter winning a board battle, kicking the puck to the open area in front of the Canes blue line.

Martin Necas picked up the puck, touching it behind his back to his stick side, and gaining speed through the neutral zone. He crossed the Preds’ blue line, cutting left to the goal. With a toe drag of the puck for a better angle, he went in but half whiffed on the shot.

Goalies have an inborn calculator that takes into account, player speed, player skill, angle, velocity and trajectory. Saros had everything lined up but that whiff threw him off as the puck innocently trickled into the crease with Vincent Trocheck banging it in right at the goal line to tie the game with 1:57 left.

The big question was with the Canes popping off 17 shots in the first while holding the Preds to just 5—could they keep up that differential but with results (goals)?

While Steve Lorentz lost the first faceoff of the period, it was Brock McGinn that got the first shot of the period that challenged Saros. After the play was deep in the Canes’ end just under the 5-minute mark, the Canes iced the puck with their 4th forward line and third D-pairing on the ice.

Hines took advantage of the icing and put his first line on the ice for the faceoff to Ned’s right. There wasn’t a clear win for the puck as it went to the near boards. Jake Bean was about to put a stick to the puck to goose it up high but was forearmed by Ryan Johansen, knocking Beaner to the ice way too easily. That resulted in the puck staying alive in the Canes’ end.

Johansen passed up to Ellis on the left point who flung the puck into heavy traffic in front of Ned. Matt Duchene tried to gain possession but Lorentz knocked the puck off his stick that landed right in front of Ned who attempted to smother the puck with his stick hand, but couldn’t.

He then tried both hands and was still not able to gain control, giving Johansen enough time to reach over and lift a backhand shot with Ned, Lorie and Jordan Martinook all falling to stop the puck.

As difficult it is to put that play behind him, Ned did just that and also stopped a sure Preds goal with a 2-on-0 breakaway from Yakov Trenin and Matthieu Oliver. Ned pulled off a split that had me wincing in pain for a sure highlight-reel save. 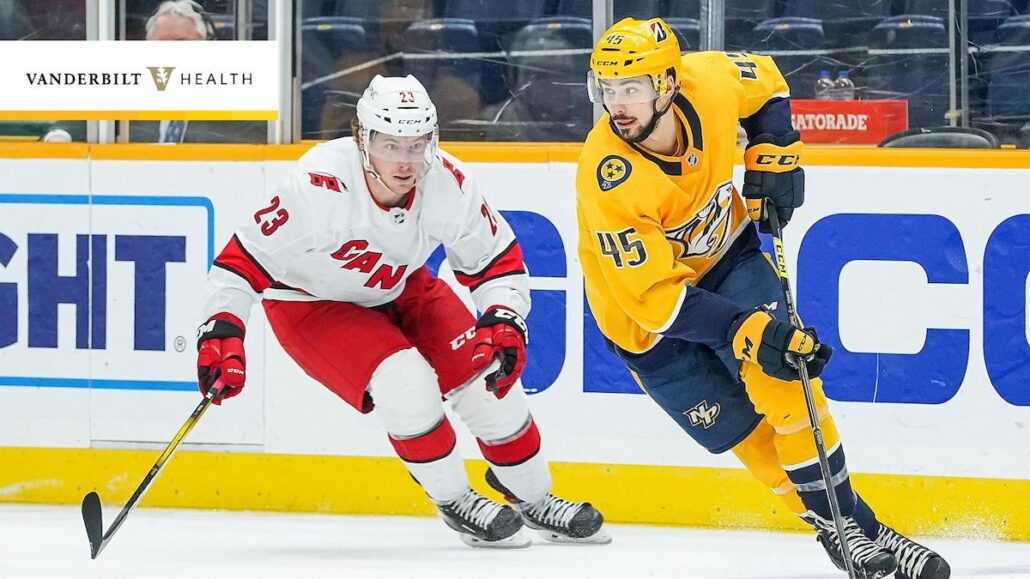 The Canes had the only powerplay of the period, coming off a high sticking penalty by Caniacs enemy #1, Erik Haula clipping Niederreiter, but came up short. The storyline of the game was the Canes powerplay couldn’t convert any of the 5 man-advantage opportunities.

The bane-turned-to-gain of the last two minutes of the period once again turned for the Canes’ favor. With slicing a couple of seconds off Trocheck’s goal, Brock McGinn scored with 1:55 left in the second.

Ginner started a cycle along the far boards, shuffling the puck over to Lorie who made a buttonhook to the net, got blocked then passed back to Ginner. He took a stride and with Martinook providing excellent net-front presence, blasted a shot off the far post with Saros completely blocked on the shot.

Roddy has had faith in his fourth line and why not? They provided the energy, had a great end to the second period and brought it back for the third.

One small, calculated twist was inserting Jordan Staal for the faceoff. That strategy paid off as Jordo won the puck back to Skjei who gained center ice then dumped it deep. Martinook laid a massive hit on Roman Josi at the far half boards and Jordo grabbed the loose puck.

He passed over to Ginner as he was cutting through the sweet area of the slot, then, whether it was losing balance or his momentum taking over, Ginner slung the puck while falling down for a goal with just 13 seconds gone in the period. This gave the Canes their first and only lead of the game, 3-2.

Predators Tie it Up on Avoidable Powerplay 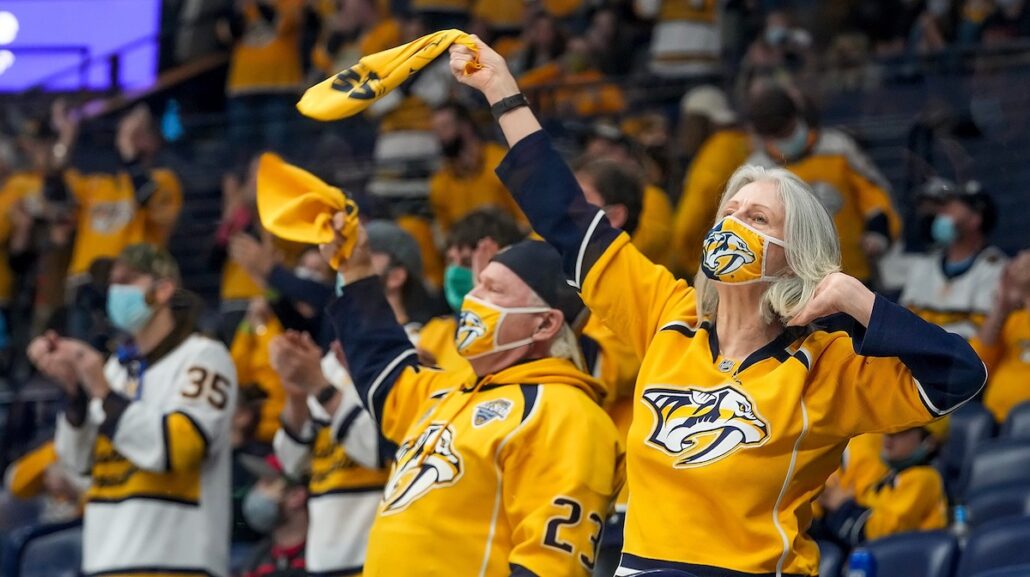 The Canes needed to keep control of their emotions as Hamilton and Svech each got penalties in the period that were avoidable. The Preds’ Nick Cousins converted on the Hamilton penalty after tipping in Haula’s shot as Cousins was left unattended in front of Ned.

For the second game in a row, with the score tied at the end of regulation, the game went into overtime.

At 4:01 of the first, the Canes had the game teed up as Cousins got a penalty for flipping the puck over the glass. As Rod preaches, everything starts with “next”— next pass, next shot and here, next powerplay.

Don’t play averages as with the Canes averaging about 27% for powerplay goals, with this the 5th man advantage, then on the average, by not converting any of the previous 4, this one should be a game-winner. Like that old cutie you had a crush on in high school, looks aren’t everything.

This powerplay looked good, but that was about it. While the Canes had 7 shots to the Preds 10 in the first OT, the only real Grade A shot was by the Preds with Ned once again doing the impossible. 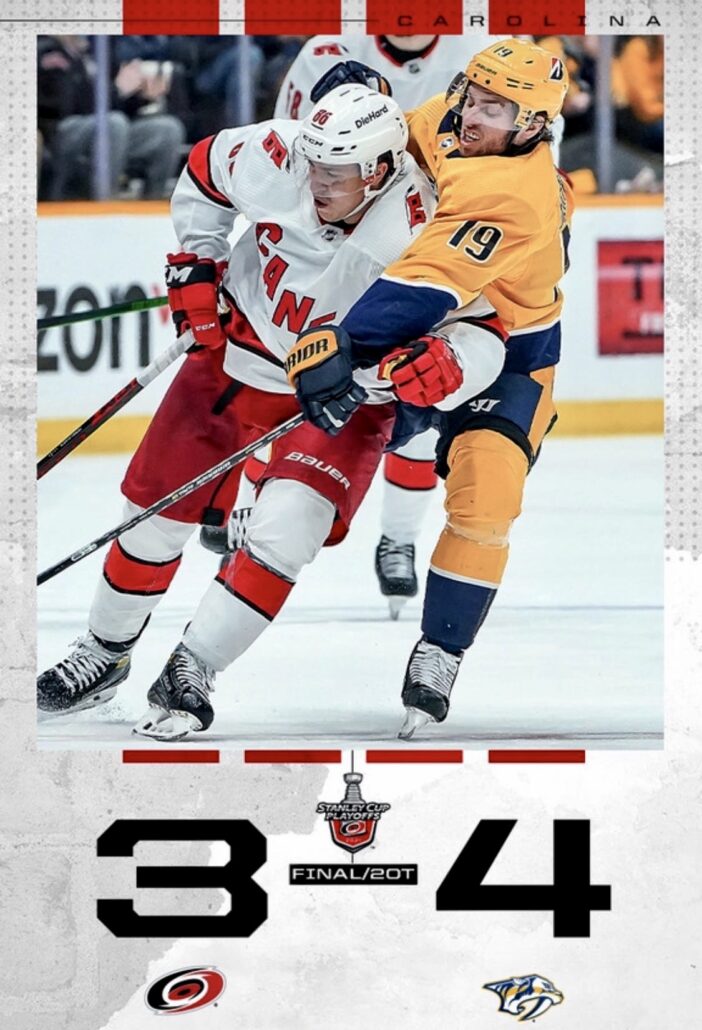 It was obvious that fatigue started to be a factor in the second OT period. Shift changes were becoming more difficult when shifts were supposed to be shorter, resulting in some shifts lasting over two minutes.

With 3:50 left in the period, Calle Jarnkrok rimmed the puck behind the Canes’ net just before Sebastian Aho checked him against the boards. Hamilton was in front of the net, possibly thinking Ned might stop the puck but his momentum committed him to go around the net.

Pesch closed in Granlund in the corner who greased a puck to Kunin on the perimeter of the far faceoff circle. He pulled out a quick snap wrister to go stick side of Ned to win the game.

Second tough loss in a row with the special teams having a negative effect for the Canes. Their overall play was good, possession was good, maybe needed more Grade A chances or to get more of the grade-A chances on net should have helped.

The next game is Tuesday at the PNC Arena. Expect the Caniacs to be in full force and high volume.