Cary, NC — Jordan Staal had 2 goals to lead the Carolina Hurricanes to a 5-2 win in the all too important first game of the best of 7 series.

The 12,000 people in the PNC Arena added to what almost seemed normal with the Loudest House in the NHL living up to its reputation.

For those that watched the game on TV, the upper level was nearly empty as the Canes management somehow allowed the Caniacs to the lower bowl, which was a smart move that certainly helped the players get more juiced up. The Canes had 3 pure rookies play in the game, Steve Lorentz, Jake Bean and goalie Alex Nedelkovic. All had excellent games with Ned accomplishing a win in his first playoff game. 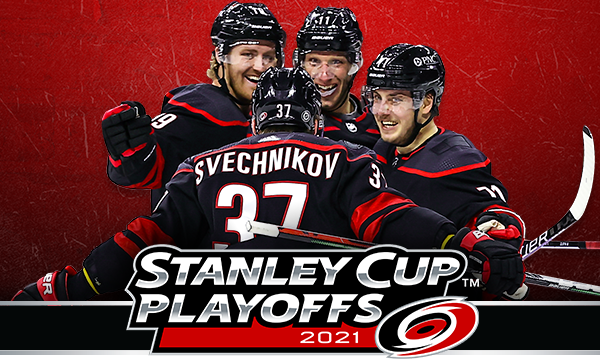 Just seeing the lower bowl with all the fans and hearing them throughout the game, even with masks on, maybe not all the time, created a great atmosphere, and the Canes fed off the crowd.

There were some fans thinking losing the last 2 games of the season to this same Nashville team would cast some doubt on this series. Coach Rod Brind’Amour has this team focusing only on game one. Never looking back, not looking to a future game or opponent. Everything starts with “next”— next shift, next play, next pass, next save. So when the first puck was dropped, even with the electric crowd making 12,000 sound like 19,000, the Canes were ready.

Jaccob Slavin was a game-time decision and was ready, more than ready. While not at 100%, 80% of Slavo is a huge lift for the team. Brock McGinn played for the first time in 20 games and was the old Ginner and delivered the game’s first hit with only 21 seconds gone in the game. It’s the playoffs so hitting picks up, and picks up big time.

The Canes dished out a season-high 56 hits. That’s about a normal total for 3 games. Not all attempted hits turn into hits. Steve Lorentz lined up a player to send him into next week only to see the player move left at the last nanosecond with Lorie slamming into the boards backward that had me feeling the pain in my lower back.

Forechecking also goes into overdrive in the playoffs and both teams were on their game forechecking. 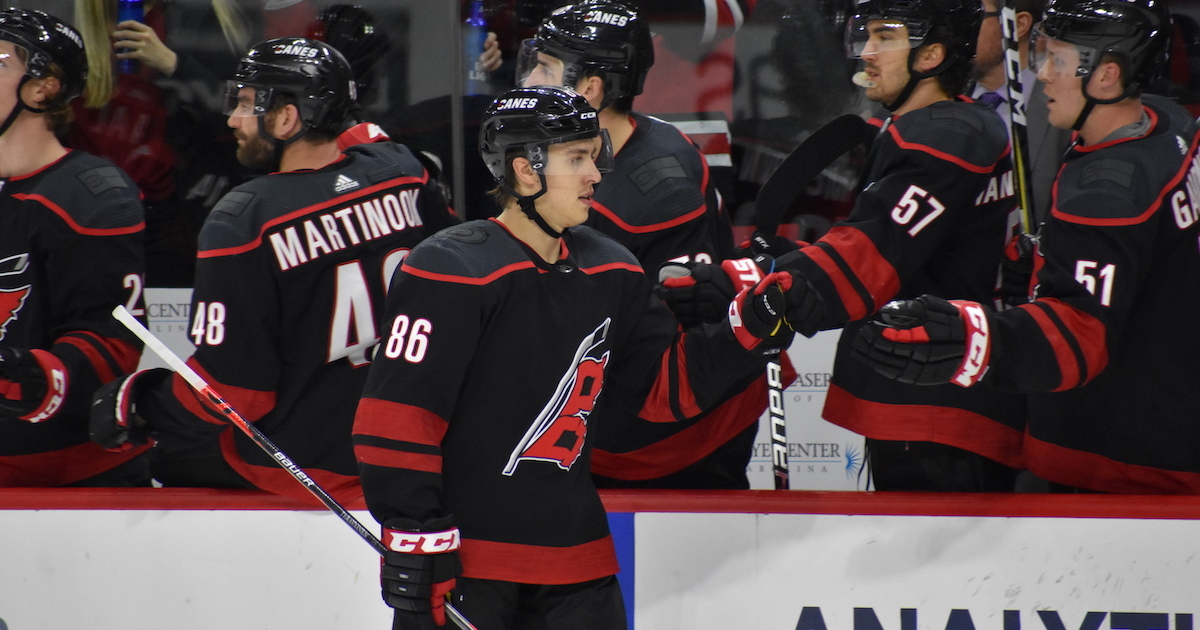 The Predators did what was important for any visiting team in the playoffs and scored first, silencing the Caniacs. But only for the moment.

After the Canes failed to clear the puck, Filip Forsberg slapped the puck deep while skating backward at the blue line. Ryan Johansen got the puck in the corner then passed up to Forsberg, cutting down and eluding coverage. Forsberg picked up the puck in stride, stick handled around 2 Canes and slid the puck 5-hole on Ned for a pretty goal.

After that moment of relative silence, the Caniacs roared back up and did what they knew had to be done and that was get the team psyched up.

Brett Pesce dumped the puck deep into the Preds’ corner with the puck going behind Juuse Saros. Jordan Martinook had taking the man vs. the puck on his mind and beat Norris Trophy winner Roman Josi to the puck. Lorie was first to the loose puck and swiped one on net that Saros blocked to the back boards.

Lorie was first to the rebound, went to the corner then passed up to Pesch on the right point. Pesch wasted no time sending a slap shot to the net that Teuvo Teravainen managed to deflect with just one hand on his stick as he was tied up by Josi, with the puck trickling in to tie the game less than 90 seconds after the Preds goal. 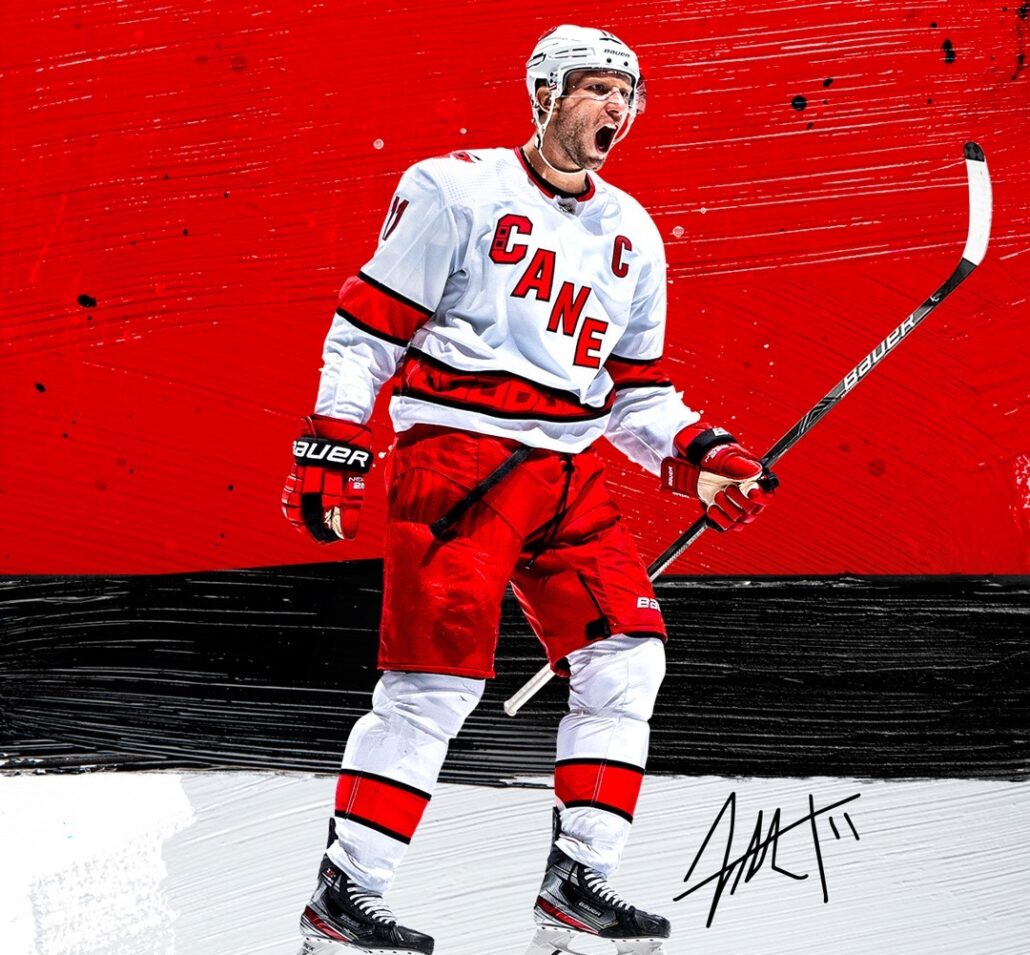 The second period saw the ice starting to tilt in favor of the Canes. Like the Canes, the Preds are a fast team and not one for the physical game although both teams will play whatever type of game is dished out.

The Canes had a golden opportunity to get the go-ahead goal when Martin Necas was high-sticked by Forsberg. It easily could have been a 4-minute penalty as Necas probably had a cut inside his mouth but the refs only called for 2 minutes. Turbo had an innocent play that resulted in tripping former Cane, Erik Haula, in the neutral zone making it a 4-on-4 for 32 seconds.

With a faceoff just above the Preds’ blue line, Jordan Staal won the draw and pulled the puck back to Pesch. As everyone jockeyed for position, Pesch passed to Jordo who was open in the middle. Jordo carried the puck into the Preds’ end with Josi and Mattias Ekholm closing in on both sides. Ginner joined the rush down on the right as Jordo kicked in high gear.

Stretching his guns (arms), Jordo kept the puck about 10’ in front of everyone then, just as he got 1 foot in front of the goal line, he slung a hard wrister into the far upper corner for a highlight-reel goal with 2 seconds left on the 4-on-4. Simply unbelievable.

Four and a half minutes later, Jake Bean failed to clear the puck along the far boards, allowing Matt Duchene to settle the puck inside the blue line. Duchene passed over to Haula in the mid slot area who sent a wrister that deflected off Jani Hakanpaa’s sweater, changing the direction by 30 degrees to tie the game 2-2, on the 3rd of only 5 shots the Preds had in the period. 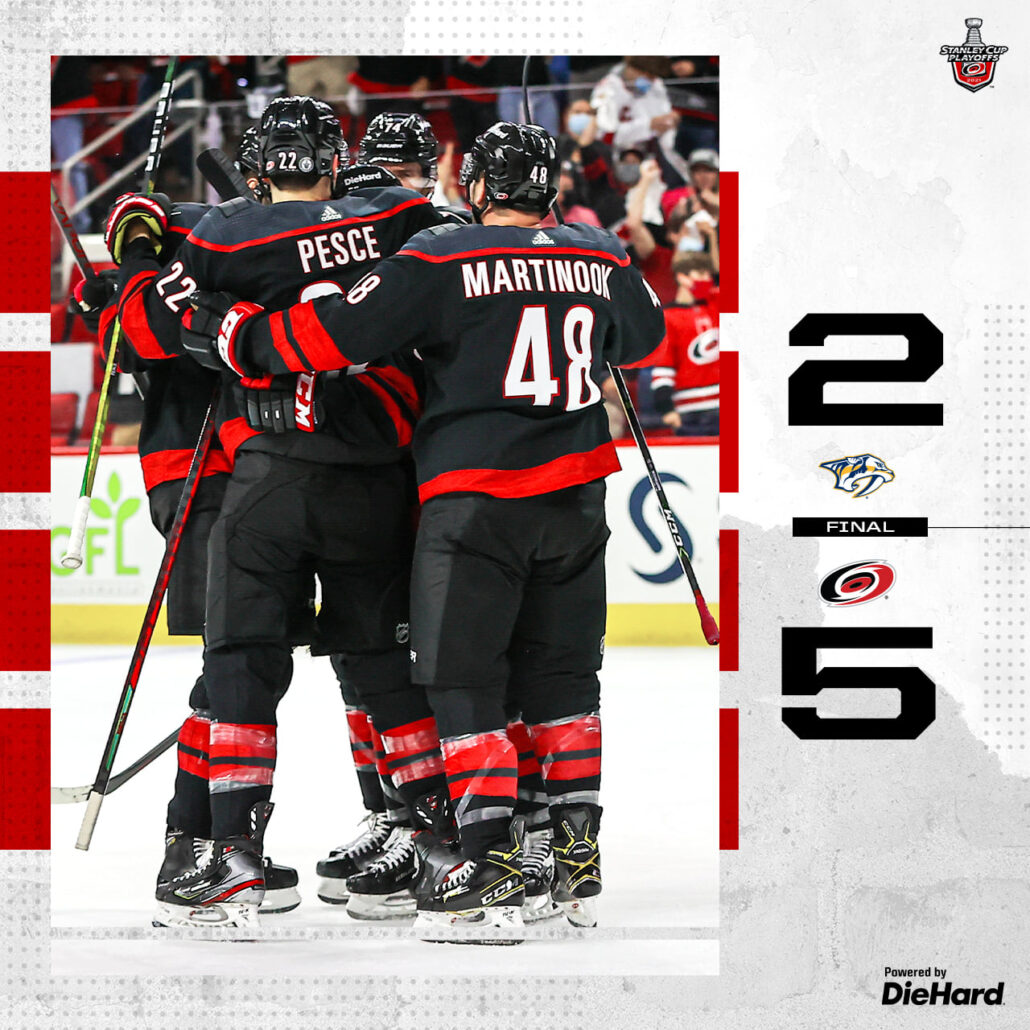 The Canes may have been playing the Predators but it was the Canes that were smelling blood. The Canes forechecking, and hitting, were having the results Roddy wanted which had the Preds’ heads on a swivel to concentrate on what was coming next rather than making a play or effective pass.

The next goal was picture perfect, just as done in practice a thousand times. Nino Niederreiter intercepted the pass right over the blue line immediately passing over to Necas going down the right wing. Necas carried the puck a few feet off the far half boards with Vincent Trocheck cutting down the left side of the slot.

Nessy made a crisp pass that Troch one-timed with Saros making a fantastic save. Nessy picked up the puck behind the net and threaded a beauty of a pass to Nino just about the crease who one-timed the puck in for a Canes 3-2 lead and what amounted to the game-winner.

At the 9 minute mark, Warren Foegele dumped the puck deep behind the Preds’ goal. Jordo laid a heavy hit on Luke Kunin while spalling the puck loose. Foegs picked up the puck below the goal line going right to the net trying to stuff the puck but Saros had the pipe covered.

As the puck got lost between 10 skates, Jordo found it, went up to the mid slot area, and twisted around with the puck whipping through Saros’ pads for his second of the game and a nice cushion with 12 minutes remaining.

The trash-talking and swipes after a whistle seemed to ratchet up a few notches after that goal with the refs sending a message that law and order will prevail. Both Lorentz and Duchene got unsportsmanlike penalties as they jostled for position while lining up for a faceoff.

The Canes’ experience helped them retain the lead. It’s not that they turtled in the period but played smart, sending all 3 forwards deep only when it appeared to be a good scoring chance or a clear possession opportunity existed in the Preds’ end. The Preds did kick up their play in the third but Ned was on his game. One time he had everyone taking a breath as he made a save and tried to rake the puck back to his glove only to mishandle the puck keeping it live right in the blue crease.

A great play by Hakanpaa stopped what was sure to be a momentum-changing goal. Nothing on the scorecard for that play but without a doubt, noticed by the coaches and Jani would hear some praises after that shift.

Late in the game with Saros pulled, after a scrum in front of the Canes bench, the puck squirted loose with Andrei Svechnikov grabbing it. Svech turned on his jets and beat out Ryan Ellis, skating 100’ before burying the puck into the empty net to seal the game. Svech had a great game getting off a game-high 8 shots on goal along with 3 solid hits.

Great first game all around — the score, the Caniacs, and back to some degree of normalcy.