Cary, NC — Being that Mother’s Day is fast approaching, it took the sole female at the post-game press conference to have Roddy see the bright side of taking 9 of 10 points in their last homestand.

Up to that question, Roddy was clearly not in the best of moods as the Canes didn’t have one of their best games. Certainly, the first and second periods were sub-par performances, and Rod was stressing, as all good coaches do, now, with the playoffs starting next week and it’s just not the time to have “bad habits.”

The Canes held on to a slim 1-0 lead up until 3:01 remaining when former Cane Corey Stillman’s son, Riley, got his first NHL goal. Then the Hawks took the game in overtime, 2-1.

Canes Dominate Shots & Faceoff Circle — But Not the Ending Score 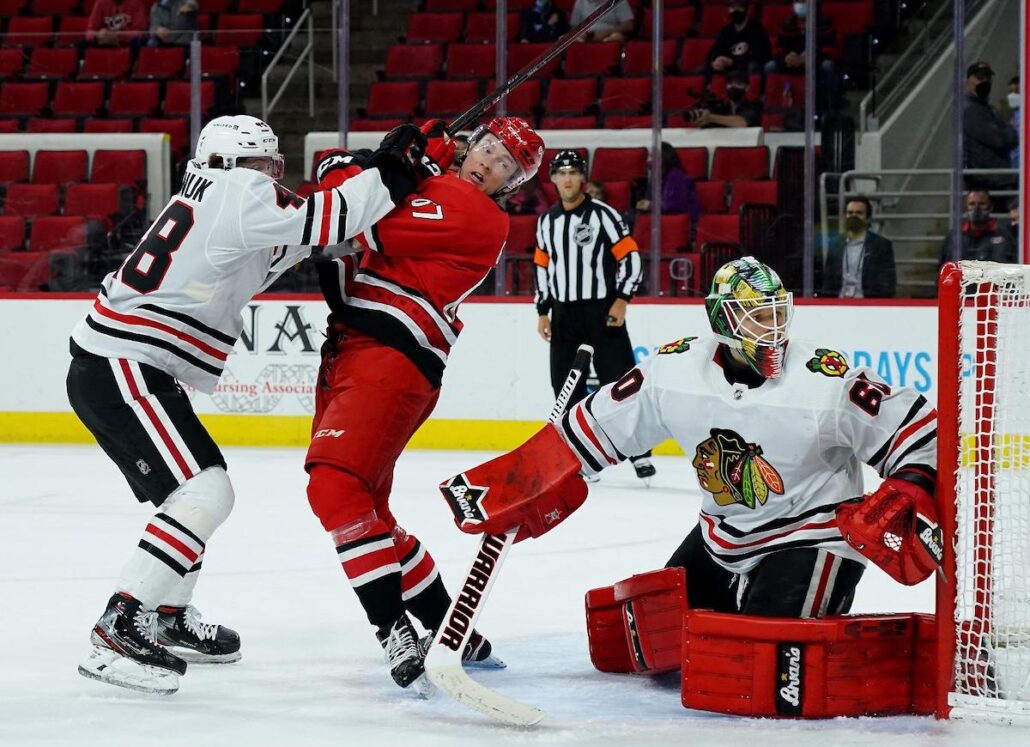 The teams had a day of rest after playing back-to-back games on consecutive nights earlier in the week in which the Canes won both games. No player or coach thinks winning 2 consecutive games makes the 3rd highly predictable.

If that was the case or had any data to back that up, the playoffs could be shortened to the best 2 out of 3. Even suggesting that would have fans, players, coaches, sponsors, NHL brass and owners, for once, all agreeing on what is the definition of a bad idea.

If you look at just the stats for the game, you might think the Canes won. Maybe even easily won. They dominated on shots, 37 to 27, dominated in the faceoff circle to win possession, 59% to 41% and possessed the puck far longer than the Hawks.

Typically, when the other team has the puck more, you do what you can to turn the puck over which usually starts with solid forechecking and hitting. The Hawks outhit the Canes, 36 to 24, and caused more turnovers by a huge margin — 31 to 13 —mostly due to effective forechecking.

The Canes’ Teuvo Teravainen got the Canes only penalty of the game for hooking Adam Gaudette just shy of midway in the period. The penalty kill team was very effective, allowing just one shot that Petr Mrazek easily made a glove save. Vincent Trocheck won the next faceoff which led to the Canes clearing the zone.

Necas Gets Second Shortie in 2 Games 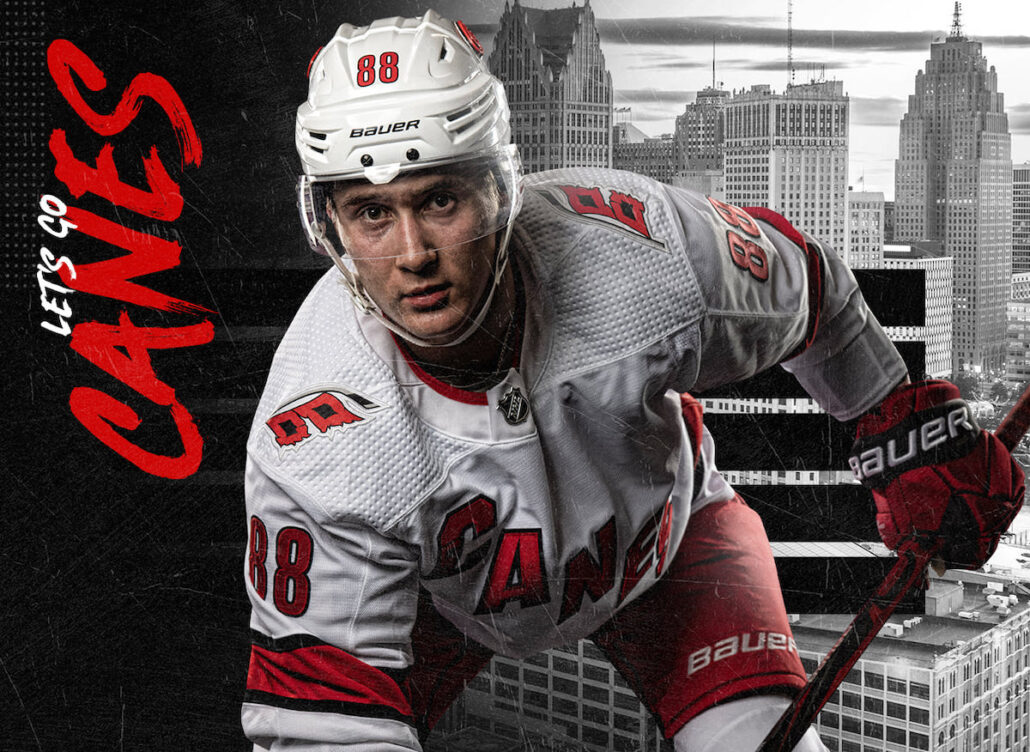 Duncan Keith lost an edge just as the puck got near him with the puck containing its path to the neutral zone. With the puck still traveling along the boards, the linesman hopped onto the boards in front of the Canes bench. Keith started to get up and just as he got to his feet, still in the prone position, ran into the linesman’s knee big time, sending the 2-time Norris Trophy winner, reeling in pain with the lineman helping Keith to his bench.

That collision allowed speedster Martin Necas to pick up the puck in full speed with Sebastian Aho joining in on a short-handed 2-on-0 breakaway.

Delia played the angle in the crease as best as he could, effectively taking the passing chance to Fishy. Necas read that then took the puck right to the net, faked short side, and went just above the blue crease to flip a backhander in for his second shortie of the week.

If something was needed to trigger better, more intense play by the Canes, that should have been it — but it wasn’t. The Canes just couldn’t seem to get in a good rhythm which hockey pundit Kelly says “life and hockey all starts with rhythm.”

Mrazek Keeps Canes In the Game 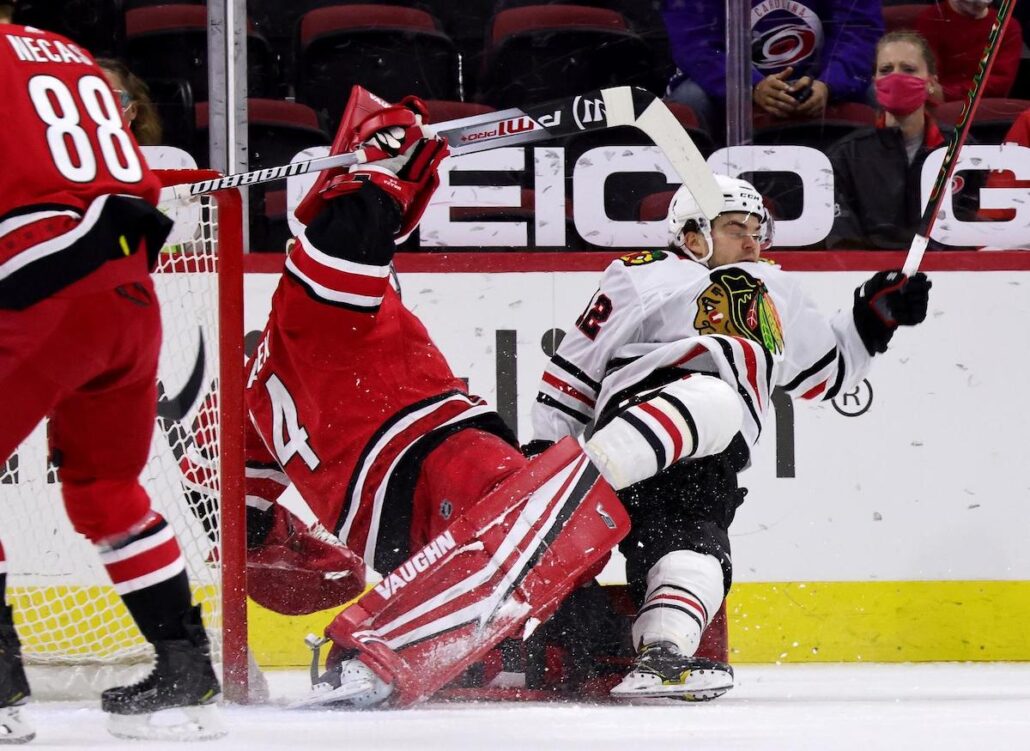 It’s not that the Canes’ second was awful, just not typical Canes hockey. The Canes had a season-high 15 turnovers in the period.

Chicago stole the sheet from the Canes playbook about forechecking, who are a very good forechecking team in their own right, but they were outstanding in the second. That resulted in the Canes looking disorganized at times. Roddy changed a couple of lines in the hopes to change the Hawks’ rhythm but Hawks Coach Jeremy Colliton had an excellent game plan and stuck with it.

The only error the Hawks had in the second was a poor line change resulting in a too many men on the ice penalty. The Hawks almost pulled off a short-handed goal of their own. After a shot by Dougie Hamilton that Connor Murphy blocked and paid dearly, the puck was picked up by Canes killer Alex DeBrincat who went in all alone on Mrazek, beating Mrazek to his right but the puck bounced off Mrazek’s best friend, the post to keep the Hawks scoreless.

Both Mrazek and his best friend kept the Hawks off the scoreboard all period with Raz making several unbelievable saves. Clearly the best Canes player on the ice all game. The one Cane and one penalty were it for the game, unlike the Wednesday night Rangers-Capitals game that had 141 minutes in penalties.

Most would say it was the result of a horrible assault on a couple of Rangers by public enemy #1, Tom Wilson in the previous game that the Rangers, and most fans, thought the minor fine was unjustified considering Wilson’s past along with the assaults.

Late in the 3rd, Stillman Ties it Up with First NHL Goal 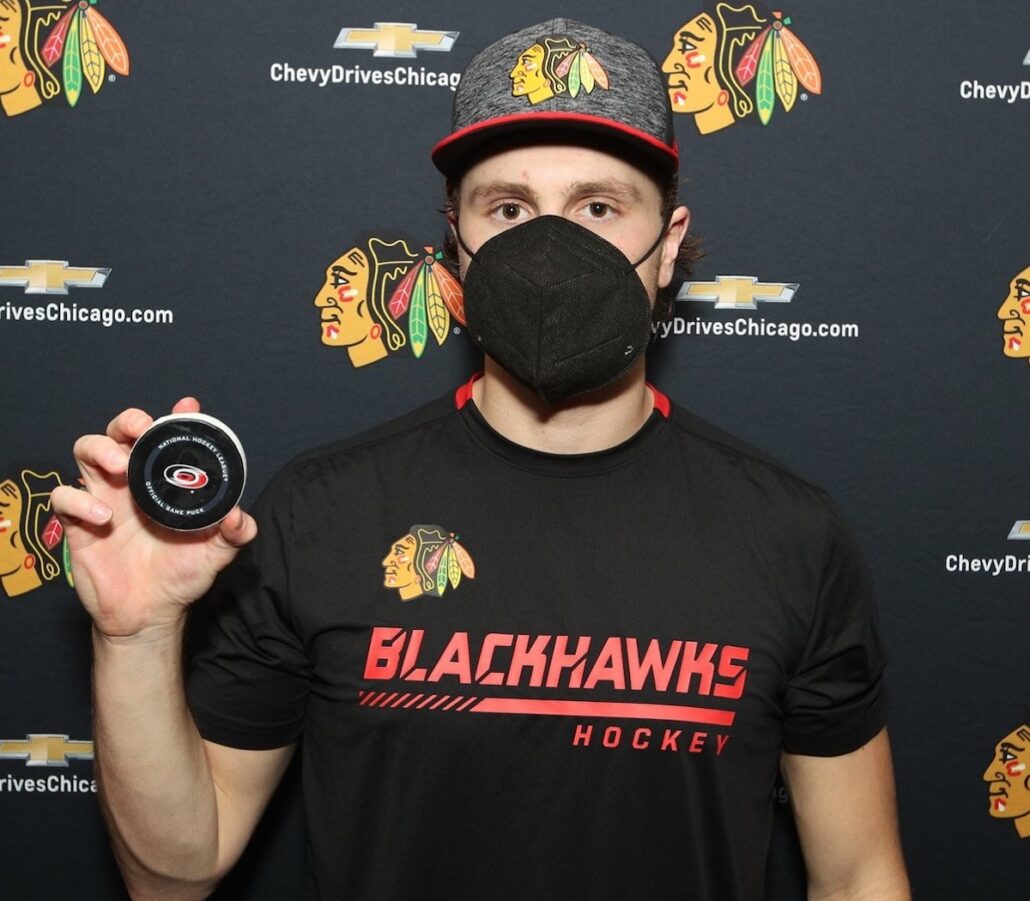 Mrazek must practice with Olympic gymnasts as he contorted his body so much, making highlight-reel save after save. Without his performance, the Canes would have been toast before the third period, let alone what the Hawks were throwing at him in the third.

Pius Suter got the puck just inside the blue line, sending a hard wrister to the goal. Riley Stillman pinched from the defense to the dirty area of the crease and just like dear old dad, tipped the puck just so that beat Mrazek for his first NHL goal with just 3:01 remaining.

Stillman also had over 24 minutes of ice time, probably far more than dear old dad ever had during a game. Do we hear some trash talking at their next family dinner? 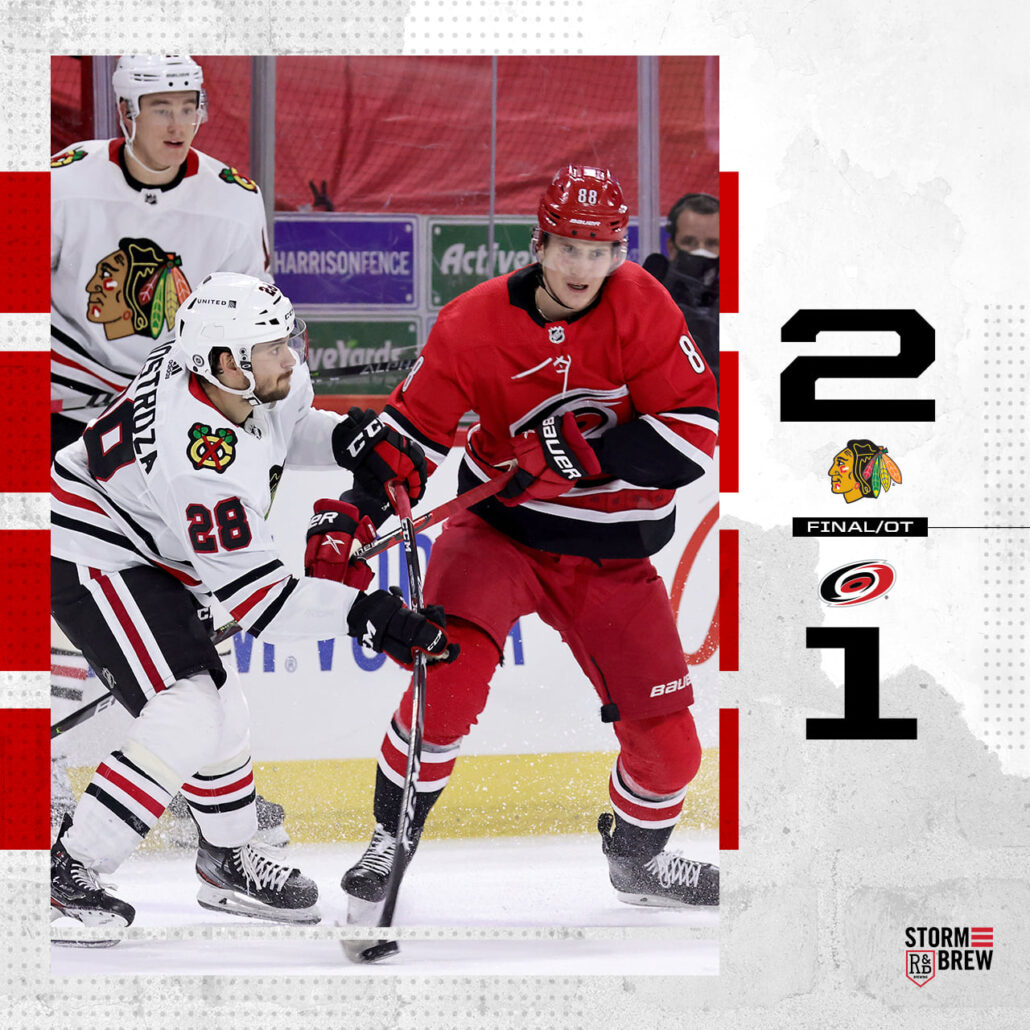 With the game going into overtime, the Canes just couldn’t get their mojo going.

After another turnover, which is what you don’t want in OT, DeBrincat got a drop pass north of the blue line. He skated smoothly into the Canes zone, lined up his shot in the high slot. With Troch in close check, DeBrincat used Troch as a screen, sending a hard and accurate wrister past Mrazek to get the win.

It was a great looking goal but taking the words of wisdom from where it usually comes from best, women, getting 9 out of 10 points is a very good homestand, despite the loss.

The final two games of the regualar season await the Canes in Nashville this Saturday and Monday. Go Canes!

May at the Cary Downtown Farmers Market
Scroll to top