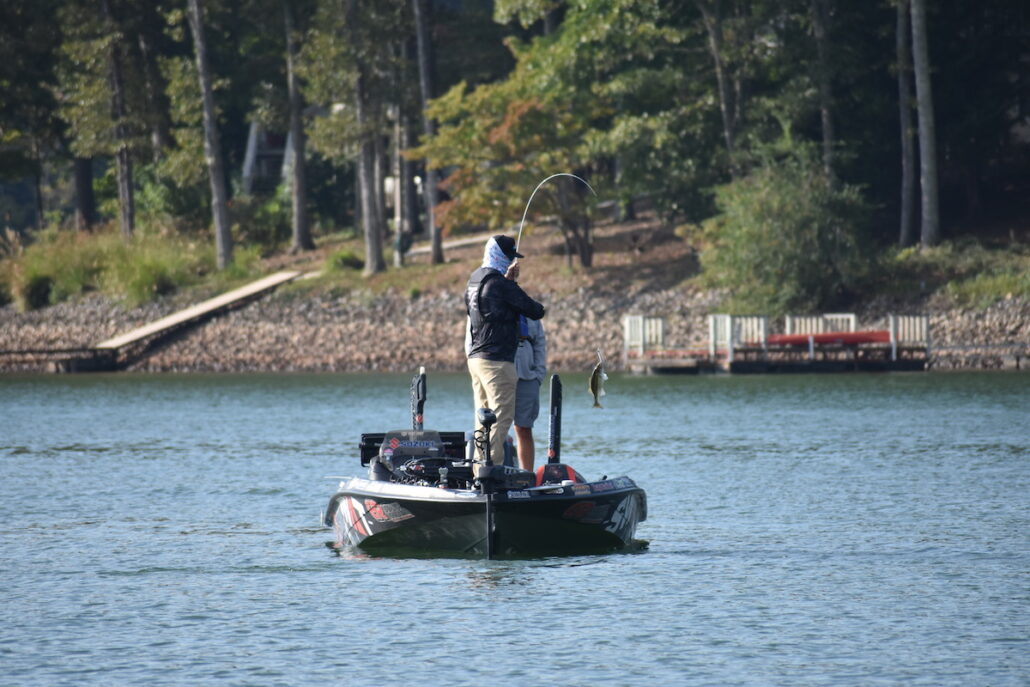 An angler in the 2018 Bassmaster Elite Series reels in a catch on Lake Chatuge in western North Carolina.

Hosted by the Greater Raleigh Sports Alliance, the tournament will showcase 40 anglers that qualified from the 2020 Bass Pro Tour season competing for more than $535,000, with a top prize of $100,000 going to the winner of the event.

“Big Bass Bonuses” will also be offered during the competition with payouts of $25,000, $50,000 and $100,000 being awarded for the single biggest fish in the Qualifying, Knockout and Championship rounds.

Bass-fishing phenom Jordan Lee was the big winner at the first-ever Heavy Hitters event in 2020 at the Kissimmee Chain of Lakes in Kissimmee, Florida. The Alabama pro pocketed $200,000 at that event; $100,000 for the biggest fish in the Championship Round and $100,000 for winning the event.

The 2021 Heavy Hitters tournament will be contested on the same waters that produced a big-fish bonanza when the Bass Pro Tour visited Raleigh in 2019 – Jordan Lake, Falls Lake and Shearon Harris Reservoir. That event produced 57 largemouth weighing 6 pounds or more, including a 9-pound, 4-ounce giant caught by Texas pro Todd Faircloth. 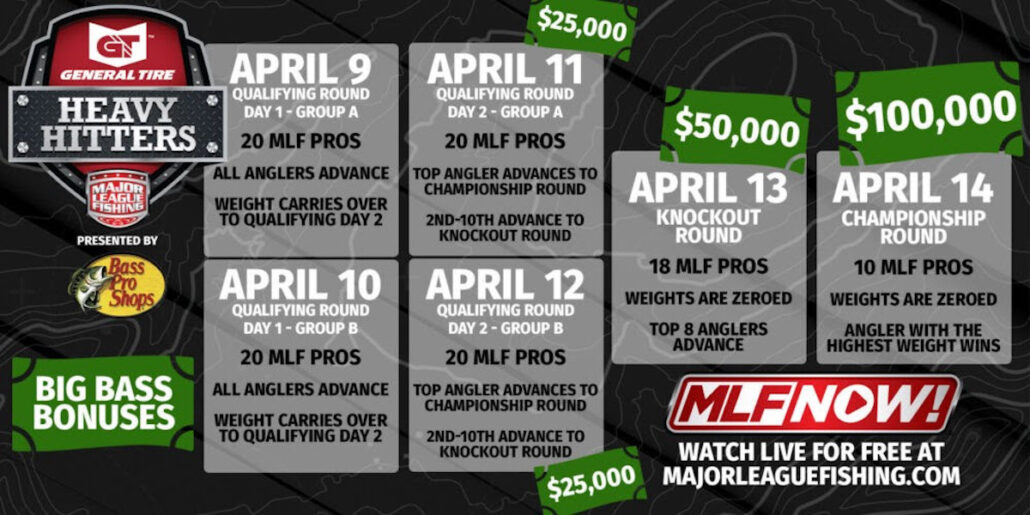 Unlike the Raleigh event in 2019 where anglers flip-flopped back and forth between Jordan and Falls lakes in the five days leading up to the Championship Round on Shearon Harris, this time around the 20 anglers in Group A will fish both of their Heavy Hitters qualifying days (Friday and Sunday) on Jordan Lake while Group B will focus two days solely on Falls Lake (Saturday and Monday).

That change will allow anglers to focus their three-day practice time on one less lake, providing them a better chance to identify big-fish patterns on the lakes they’ll fish.

“The fact that we don’t have to break down three lakes in three days is a huge, huge deal,” said GEICO pro Mike McClelland of Blue Eye, Missouri, who will be among the 40 anglers competing in the event.

He continued, “It allows a guy to maybe figure out how to catch one of those $25,000 or $50,000 fish by spending more time on one particular body of water. This event has a major focus on catching big ones, and generally, you’ll catch bigger ones the more time you spend on one body of water.”

As part of Group A, McClelland will fish two days on Jordan’s 13,900 acres. That fishery – which produced one of the best days of big-fish action in recent memory on Day 1 of the 2019 Bass Pro Tour event – is loaded with hard cover in the form of riprap, submerged roadbeds, etc. The 12,000-acre Falls of the Neuse River is a mix of riverine water on the upper end and wider, flatter, deeper water on the lower end.

“Falls and Jordan are really different fisheries,” McClelland said. “At Jordan, you’re more than likely going to be catching them shallow one way or another, but at Falls, you have the option to go up the river as far as you can go, or you can go to the bottom end, which is totally different. Focusing on just one lake, hopefully, you can get on some kind of solid pattern, and then maybe think ‘What will I drag out of the tackle box that’ll get a big ol’ one to bite?’ You’ll have a better opportunity to focus on big fish.”

As part of the event, MLF sponsor MossBack Fish Habitat has partnered with the MLF Fisheries Management Division for a habitat restoration project on Lake Mackintosh on Saturday, April 10 from 10 a.m. to 2 p.m.

With assistance from the North Carolina Wildlife Resources Commission, MLF pro and MossBack pro staffer Greg Vinson will team up with five high school anglers from the area to construct the MossBack habitat and then drop the structures in a few different locations in Lake Mackintosh.

Vinson and two of the high school anglers will return to fish the structures on Wednesday, April 14 to show how quickly bass in the lake adapt to the new structures. Additional details about the habitat restoration will be forthcoming. 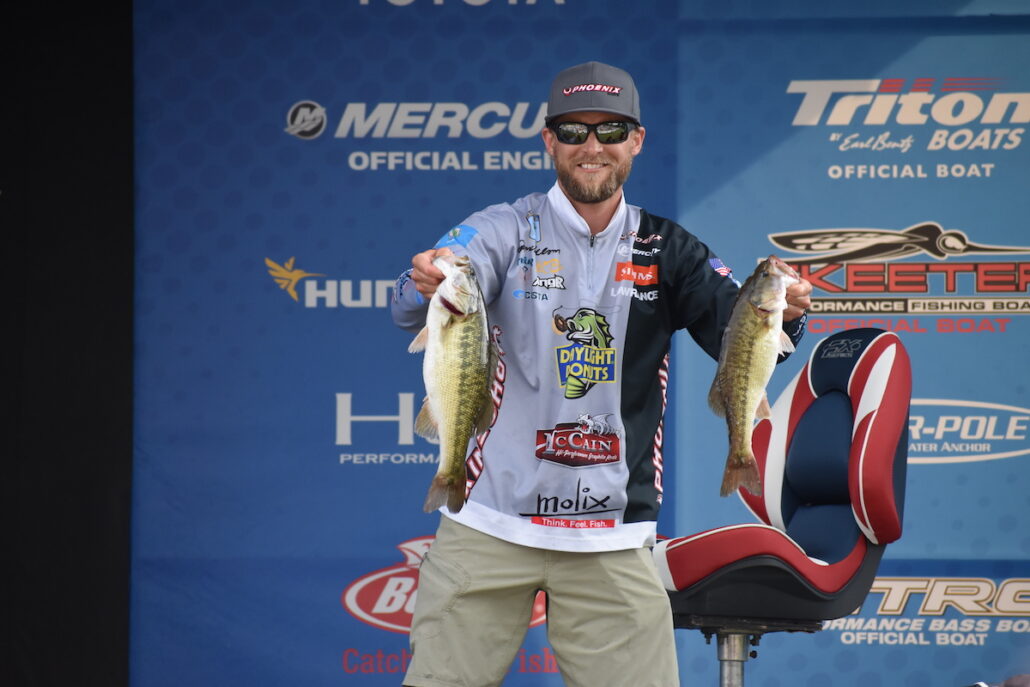 James Elam holds up a few prize bass at the 2018 Bassmaster Elite Series at Lake Chatuge.

The 20 Anglers in Group A compete in their two-day qualifying round on Jordan Lake on Friday and Sunday – the 20 anglers in Group B on Falls Lake on Saturday and Monday. After each two-day qualifying round is complete, the anglers that finish in 2nd through 10th place from both groups advance to Tuesday’s Knockout Round on Shearon Harris, while the winner of each group advances directly to Wednesday’s Championship Round on Shearon Harris.

The crowd at the final weigh in of the 2018 Bassmasters Elite Series on Lake Chatuge.

To qualify for the 2021 General Tire Heavy Hitters event, the weight of an angler’s single-largest bass from each event of the five 2020 Bass Pro Tour events was recorded. The 40 anglers with the heaviest big-fish totals from those five events qualified to compete in this event.

Attendance is limited to competing anglers, essential staff and media covering the event only. Fans are encouraged to follow the event online through the MLF NOW! live stream and SCORETRACKER® coverage at MajorLeagueFishing.com.

The MLF NOW! broadcast team will break down the extended action on all five days of competition from 7:15 AM to 4 PM. This will be live-streamed on MajorLeagueFishing.com. and the MyOutdoorTV app.

Television coverage of the General Tire Heavy Hitters Presented by Bass Pro Shops will be showcased across six two-hour episodes, premiering at 7 AM, July 17 on the Discovery Channel. A one-hour special episode of MLF Inside Heavy Hitters will also air on CBS in late 2021.

New MLF episodes premiere each Saturday morning on the Discovery Channel, with additional re-airings on the Outdoor Channel and the Sportsman Channel. Each two-hour long reality-based episode goes in-depth to break down each day of competition.

Story from staff reports. Featured image and MLF graphic courtesy of Major League Fishing. All other photos by Ashley Kairis.

Hit Health from Every Angle with ExPo LIFE Fitness