Cary, NC — Martin Necas has been on a tear since the end of January and had a career night on Saturday against the defending Stanley Cup Champions, the Tampa Bay Lightning. He finished the night with 4 points and a had a hand in all Canes scoring with 2 goals and 2 assists.

Based on the new COVID-19 guidelines, the Canes were able to let 4,433 loud, energetic and boisterous Caniacs into the arena for the largest allowable crowd in over a year and another COVID sellout.

After falling behind by 2 early goals, the coaches changed a few lines. That turned out to be the trick as the Canes’ play ratcheted up a notch from midway in the first and stayed at that level throughout the game. 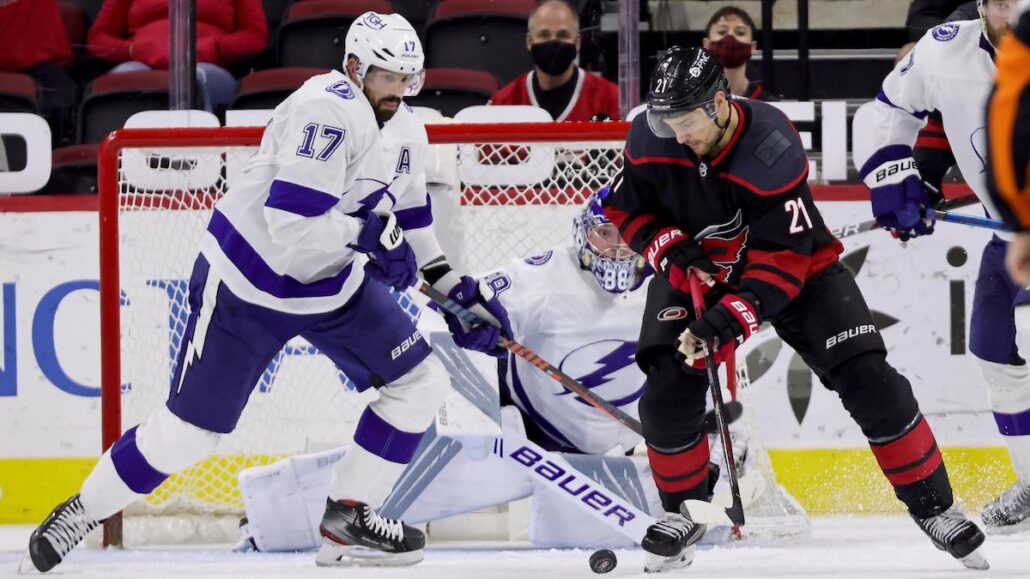 The Tampa Bay Lightning have everything you look for in a team—size, talent, four solid forward lines, three knock ’em dead defensive pairings, a world-class goalie and an excellent coach.

The Canes check most of those boxes with a marker just as heavy except in the goalkeeping area. The Canes do have 3 solid goalies but Andrei Vasilevskiy is in a different stratosphere. James Reimer was back in goal and while 3 got past him, at least two were due to missed coverage by a forward.

Early in the first, the Bolts had the puck in the Canes’ end with the Canes always chasing the puck. Blake Coleman and Barclay Goodrow were battling Jordan Martinook and Jesper Fast along the near half-boards when the puck skid loose up to Jan Rutta on the left point. 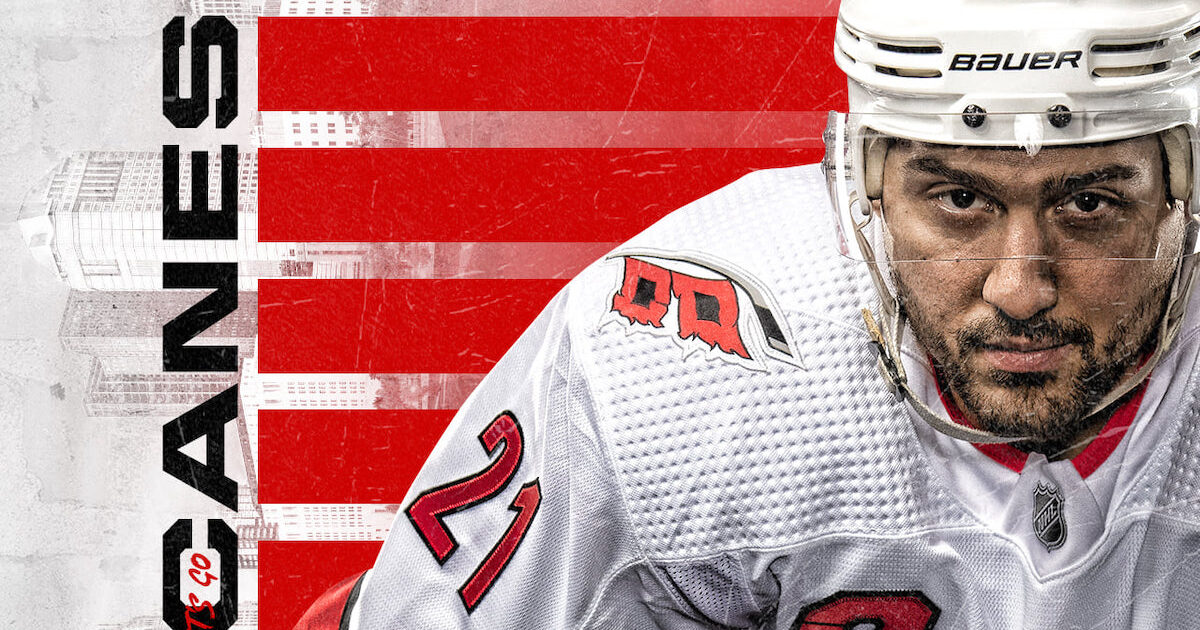 A quick look to the Canes bench saw a very unhappy Rod Brind’Amour with just his eyes telling how upset he was. Only 2 1/2 minutes later the Bolts struck again for an early 2 goal lead that most teams might have realized was going to be a long night.

If there was a memo sent out that when the Lightning get an early 2 goal lead, call it game over, the Canes didn’t pay any attention to it. Plus, they had one other factor, they’re coached by Roddy, who as a player and continues as a coach, believes every game is winnable.

With a 4 man scrum behind the goal, the puck squirted to the corner of the blue area of the crease and near post. Reims raked the puck over to his glove in an attempt to freeze the puck but Ross Colton shoved his stick under Reims’ glove, skooching the puck across the crease that Pat Maroon easily slammed home.

It was a good heads-up play by Maroon to do what coaches on every level in every sport preach, “play to the whistle.”

Having a 2 goal deficit early in a game to the Bolts can be a head game for most teams but this Canes team knew there was plenty of time to get back in the game. With 2 penalties to the Canes in the first, the Bolts had a prime opportunity to put the game out of reach but the Canes PK units were perfect on the night.

Paquette & Aho Settle the Score at 2-2 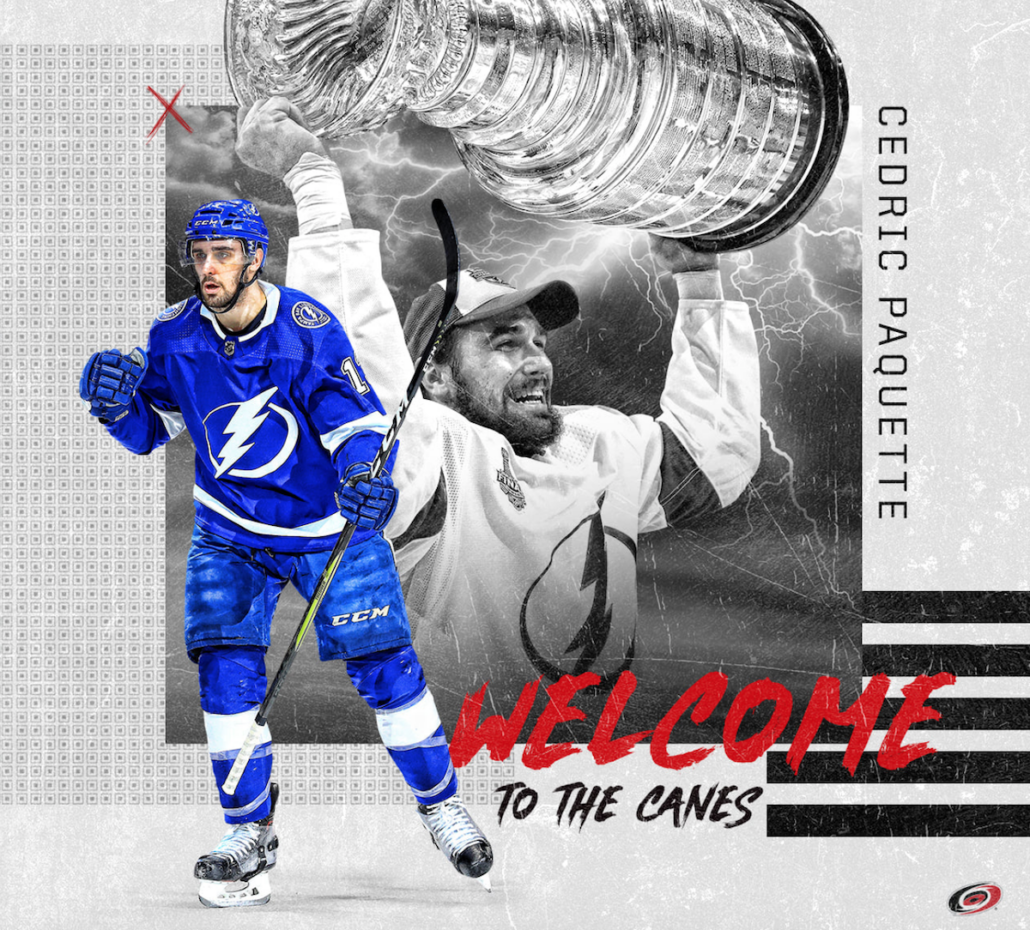 Cedric Paquette, the former Bolt, joined forces as a Hurricane in mid-February.

Early in the second, the Bolts dumped the puck into the Canes’ end, then Pat Maroon gave Cedric Paquette a shot to the legs for a delayed penalty call. Brett Pesce collected the puck in the circle to the right of Reims, sending a 50’ pass to Necas in the neutral zone just above the Bolts’ blue line.

Nessy threaded a pass over the defender’s stick to Cedric Paquette, alone, going down the high slot where he collected the puck faked forehand, backhand then pushed a forehand shot that managed to cross the goal line by 3” to get the Canes on the boards.

After the game, Paquette, who played on the Bolts last season, said he never scored on Vasilevskiy in practice. A minute later the Canes scored a real pretty goal. After the Bolts had the puck deep in their end, Andreas Borgman attempted a headman pass to the neutral zone that Brady Skjei blocked.

Nino Niederreiter had his body heading one way but managed to backhand the puck to Necas on the Bolts blue line. Nessy carried the puck into the Bolts end then flipped a pass to Nino racing down Broadway. The puck was bouncing, not allowing Nino to get a good grip on a shot which Vasilevskiy was expecting.

Instead, he passed left to Sebastian Aho camped out on the right post who chipped a shot over the goalie’s shoulder to tie the game with just 3:26 gone in the period with the 4,433 Caniacs sounding like 18,680.

Necas Puts Canes Up By 1 on the Powerplay

The forechecking by the Canes in the second went to another level. Every line was quick on the puck, paying the price along the boards and in the corners with the defense acting as a barrier in front of Reimer. The Bolts started to take exception to the push back by the Canes and the choppiness started to emerge on both teams.

Nino is a hard-nosed player and is not one to necessarily start anything but certainly won’t back down. Midway in the period, after getting a hard check to his back, Nino got called for a cross-check against one player, a roughing penalty against another with a third Bolt, Blake Coleman offsetting one penalty with an unsportsmanlike conduct call for possibly helping the refs with words that would require a visit to the confessional with a priest.

The Canes killed off both the 4-on-4 and the man-down situations then quickly found themselves on a powerplay after Coleman, who obviously didn’t let the earlier confrontation go, manhandled Warren Foegele in front of the crease. Smart play by Foegs to walk away as Coleman clearly was trying to get Foegs to drop the gloves.

With the Canes on the powerplay, Fishy had the puck behind the goal, passing up to Necas along the near half boards. Nessy held the puck looking to the dirty area with Jordan Staal and now Fishy in the crease but covered. Necas made a backhand pass up to Dougie Hamilton who quickly passed over to Andrei Svechnikov on the far side.

Svech took a shot that hit Fishy in the back bouncing to the right where Necas jumped forward and from a bad angle for a right-handed shot managed to slap the puck home for a powerplay goal. 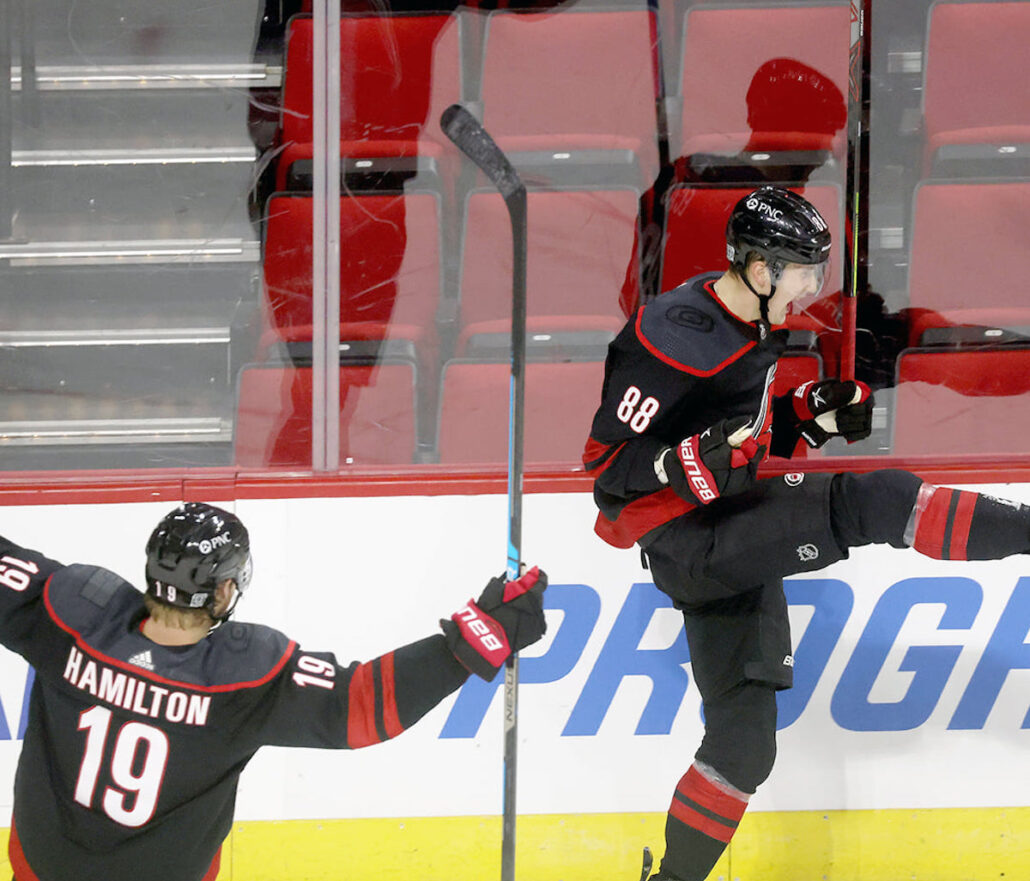 The Canes missed an opportunity to clear the puck that allowed Maroon to tip the puck to Matheus Joseph who got past his defender then made a quick snapshot like a pitching wedge that went over Reims’ left shoulder. The Canes continued their relentless forechecking while the Bolts continued their relentless banging bodies along the boards with the expectation that sooner or later, those hits have to take their toll.

The Canes are probably more fit than the average team, make that the Canes ARE fit like no other team and there’s no quit or fatigue with this group. Credit conditioning coach Bill Burniston and maybe the intimidation factor of Brind’Amour in the workout room for hours himself.

The puck was bouncing forcing Hamilton to pancake the puck. Hamilton eyed Svech on the left, read where he didn’t have a good shot then passed back to Nessy. Necas took a stride, got to the top of the circle and with Jordo providing an excellent screen, let go a silent wrister that found the back left corner of the net for the game-winner.

With that assist, Hamilton now has the longest point streak in the NHL this season and has blown by any streak by a franchise defenseman. The Canes play up in Chicago for the next two this week then back home for a season-long 8 game homestand. Tickets are now available for all home games.