Cary, NC — Jerry Miller and Tom Byrd collaborated to write, illustrate and publish two editions of the definitive history book, Around and About Cary.

The following are their own accounts of how that book came about.

“As an architect, my business was to design and draw house plans for developers. I also liked to draw old historic buildings in Cary.

After amassing about twenty-five pictures of older buildings, I wanted to try to publish them in a book, but I needed to find somebody that would do the writing. I found out my neighbor, Tom Byrd, worked for the NC State agriculture department writing articles.

So, I approached Tom about writing descriptive captions to go along with my pictures for a book. He eventually agreed. He went all over Cary interviewing people and doing research at the North Carolina archives about the beginnings of Cary, while I was doing drawings to go along with what he was learning.

We called the book Around and About Cary. It came out in December of 1970, just before the Cary centennial in 1971. Our little paperback book sold out a number of times. Then in 1994, Tom and I put out a much bigger second edition of the book. We had three thousand hard-bound books printed, with 190 pages and 175 of my pen and ink drawings.” 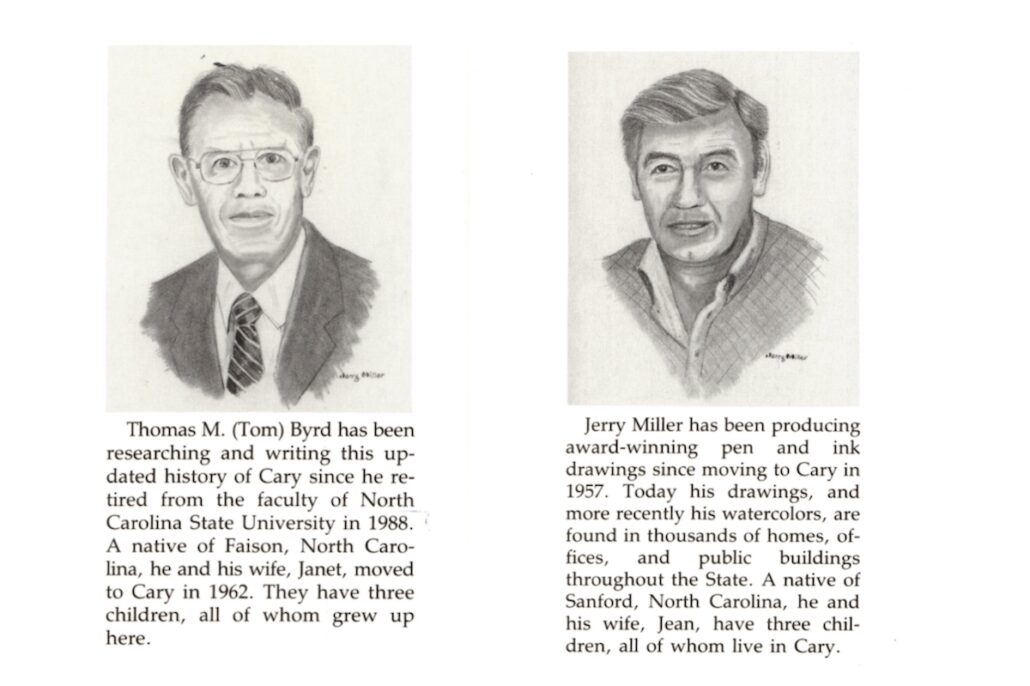 “Jerry Miller’s hobby was sketching older places in town. He decided he wanted to publish them into a book, but needed help with the writing. He found out I was a writer, so he came to me and said, “Tom, I’d like to publish my drawings in a book, but I need someone to write a few sentences about these places to go under them.”

I agreed to take it on, and started doing research. At the end of 1970, together we produced and self-published the paperback first edition of Around and About Cary — an illustrated, brief history of the town.

The printer charged us $1.00 per copy. The Cary Woman’s Club took over selling it during the Centennial as a fundraiser. Almost twenty years later, in 1989, we decided to publish an updated, expanded second edition, with a much more in-depth history of Cary.

We organized it into sections covering different phases of the town’s history up to 1990. It took us five years, working on it on and off. I think I surprised Jerry. I didn’t produce what he expected.

After I retired, I could spend more time doing the research, and really became fascinated with the project. So many people in Cary helped and gave us details of the town’s past history. Over time, it grew into the final hard-cover, fully illustrated history of Cary. It came out in 1994.”

For those looking to purchase the book Around and About Cary, a few copies are available on Amazon.