Cary, NC — Last week, while the rain was unrelenting on Thursday, the groundbreaking ceremony for Fenton continued on.

“I think this is the perfect day to have an event like this after all the twists and turns this project has gone through,” said Paul Zarian, director at Hines Real Estate Firm.

The 69-acre site, located along I-40 and Cary Towne Boulevard, is one of the largest retail-focused projects currently underway in the United States. The vertically integrated, mixed-use development is set to have its grand opening in Spring 2022.

Retail Leasing Reached 73% Ahead of Groundbreaking

As of November 12, 2020, the leasing team behind Fenton brought the project to 73% leased in its retail portion with the partnership they landed with Arhaus. The nationally-known retailer specializes in handcrafted home furnishings and will have a nearly 18,000 SF store at Fenton.

“Fully capitalizing the project and securing commitments from retailers during a pandemic reflects significant confidence in the project, particularly its open-air design and modern mix of uses. We look forward to seeing this memorable project rise in the months ahead,” said Zarian in a Hines news release. 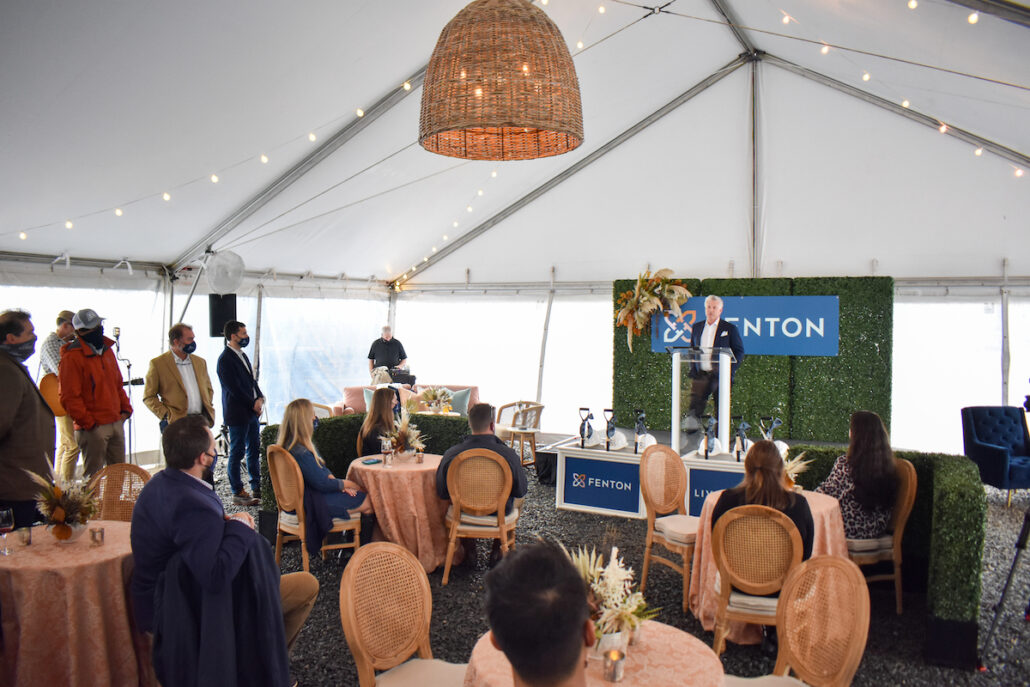 Abbitt Goodwin, partner at Columbia Development speaks at the groundbreaking on Thursday, November 12, 2020.

Speaking at the groundbreaking to a crowd of more than 50 gathered under a tent were some of the project’s key players including:

Fenton’s groundbreaking is the latest milestone in a 6-year process. In Abbitt Goodwin’s remarks, he said, “In our first sight plan we had a Wegmans, an IKEA and about 20,000 parking spaces and a couple of outparcels.”

Then, he said, there was a big question — could this be more? The Town of Cary urged that it had to be more.

It came back to the drawing board time and time again until the final plans were made and it took hundreds of people’s involvement to make it so according to Goodwin.

Just last month the development team closed on what is believed to be the second largest construction loan in Triangle history for the continued development of the project.

It’s also the “largest construction loan to close for a retail-driven project in the U.S. since the start of the coronavirus pandemic,” according to Real Capital Analytics.

Money Matters: Brush Up on Your IRA Facts
Scroll to top