Cary, NC — On October 14, The Cary Chamber hosted their second candidates forum, this time for those running to represent Cary on the Wake County Board of Education. 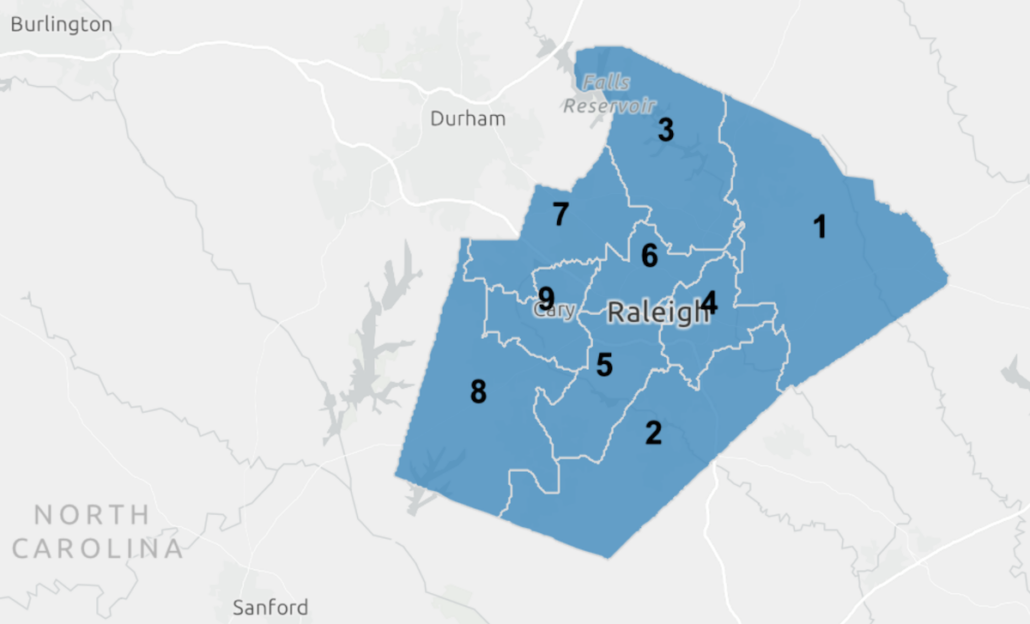 In the 2020 General Election, the candidates for the Wake County School Board will be voted on by district.

The virtual chamber event was open to the 7 candidates representing the western districts of Wake County — 7, 8 and 9. While District 9 covers most of Cary, Districts 7 and 9 also dip into parts of Cary.

On the virtual forum was current board member representing District 7, made up of mostly Morrisville and Leesville areas,Chris Heagarty for district 7. His challenger in the race, Rachel Mills did not participate.

Both candidates for district 8, primarily covering Apex and Holly Springs, were in attendance. That is incumbent Lindsay Mahaffey and challenger Steve Bergstrom.

The two candidates in the race for district 9, representing Cary, joined the forum as well — incumbent Bill Fletcher and challenger Karen Carter. The third candidate, Daniel Madding, has withdrawn his candidacy.

Get to Know the Candidates

The rules for the forum were that each candidate would get 90-seconds for an introduction and again for closing comments with 2-minutes to respond to a series of 3 questions. Here’s a brief recap of what each candidate had to say about themselves.

Heagarty is finishing up his first term on the board representing part of NW Cary in the Panther Creek High School area. He was elected onto the board following a vacancy and he decided to run because of the importance of schools in community and he and his wife had done a lot of school volunteering.

He grew up in Wake County Schools and now has two kids in middle school. He advocates for transparency between the board and the community.

Father of four and U.S. Air Force veteran, Steve Bergstrom, is now a commercial pilot and brings experience in budget management from his time working for the Department of Defense.

His reason for running for school, as he puts it, is because he saw issues that need to be fixed.

“Discipline, team work, leadership skills and accountability, I feel like those things are very much needed in today’s school board system,” said Bergstrom. His top priority is to make WCPSS the number one option for all families.

Mahaffey is a mother of 3, a teacher with her masters degree and has served on the Wake County school board for four years. As she runs for a second term, she says her three guiding pillars are to support students, trust teachers and strengthen the community.

“At this time with everything that is going on, we need not only someone on this board that has education experience and whose children have been in Wake County for the past 6 years; we need someone who can bring that continuity of leadership that is student-centered,” said Mahaffey.

Incumbent member of the school board, Bill Fletcher, has represented Cary since 2013. His focus is on improving student achievement and encouraging the NC Legislature to properly fund public schools.

“I have been able and committed to reaching across to people who have different points of view, different ideas and different perspectives on how we should operate our schools and how we need to serve our students,” said Fletcher. 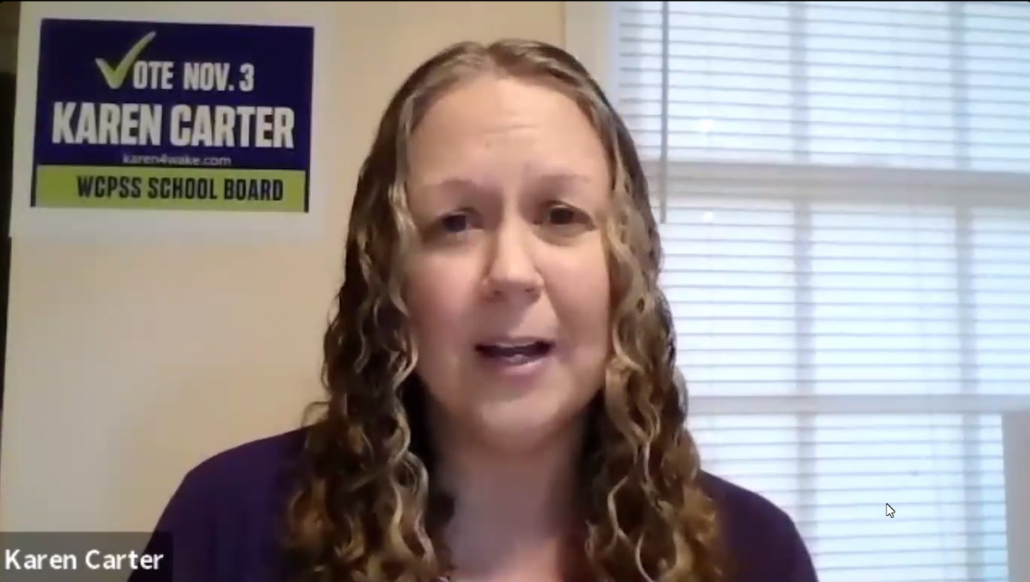 Karen Carter was not allowed to participate live in the forum because as a member of the Wake County Public School System staff, she is unable to participate in campaign events during school hours. Instead, she pre-recorded a video to be shared during the meeting.

In her remarks, she said, “It’s part of my priorities to put children and their needs and what’s in their best interest first.”

Carter is a Triangle native with a degree and experience in social work. She has had at least one of her own children in the WCPSS for the past 14 consecutive years and it is her 9th year serving in the school system as a special education instructional assistant.

Looking to the present issue most parents are concerned with, Carter said when looking at reopening schools, “we need to ensure that the safety and well being is first and foremost for all staff, our students, our families and community. We need to understand that changes are fluid and that we communicate those changes clearly.”

The Process to Re-Open Schools

Moderator of the forum and chair of the Chamber board of directors, Rick Stephenson, asked the candidates to directly speak to student families with this question.

“Many families share that they haven’t felt heard or listened to with regards to the school re-opening plan. How do you respond to those families and concerns?”

First to answer was Heagarty who laid out the “untenable” positions that families have brought to the board.

“We have people on one side that want us to open up schools tomorrow and they write to me and say that COVID is a hoax and this whole thing is a political agenda. I have other people that write to me saying that we can’t open schools until there’s a proven vaccine that’s been going on for months and anything else is just killing people,” said Heagarty.

Bergstrom disagreed in saying that it is not an untenable situation and reaffirmed that parents like him do not feel heard and most want their kids back in Schoo full-time with safety measures in place.

“What parents are coming to the school board and saying is we want a choice. We want a voice,” said Bergstrom. He also made a point to jab at his District 8 opponent, Lindsay Mahaffey, claiming that she did not listen to parent concerns in a recent meeting.

In response to the accusation, Mahaffey clarified that she was taking notes at that meeting. And on the topic at hand, Mahaffey said a poll went to NC and Wake County families, finding that roughly 30% of parents prefer virtual only, 30% preferred a hybrid option and 30% preferred all in-person schooling.

“It is very, very difficult to make sure that everybody has what they are looking for, but we certainly are listening,” said Mahaffey.

Fletcher seconded the issues laid out by Heagarty, but said the main issue is not necessarily a planning issue as much as it is a communication issue.

“The diversity of information that’s available to people from different sources is creating significant confusion,” said Fletcher. “The data is all over the map.”

By working with Duke University and other health professionals, Fletcher says the board is working on creating a roadmap for the way forward to re-opening schools.

The two candidates on the forum that could not have seen things any differently were Bergstrom and Mahaffey.

Outside of his prior accusation on listening to speakers at a recent meeting, Bergstrom also had his fair share of head shaking, smirking and speaking while Mahaffey was responding, even though he was muted on the Zoom call.

“I think that students want to return to schools. I believe that teachers want to return to schools. I know that there is some diametrically opposed opinions between myself and the incumbent this year, but I think that celebration needs to start now,” said Bergstrom. “I think what parents who elect the school board want them to do is to get their kids back is school now.”

Later responding to the same question on challenges that will face this next group of board members elected, Mahaffey said,

“Opening up the doors to the building is not going to fix all the issues that we’re seeing in our community.” She underscored the importances of social distancing, masks, hand washing and an overall new and safer experience for kids returning to school.

Doubling down on his points, Bergstrom said, “The PPE is there, the ability is there, I just think that the leadership needs to step up and say how we are going to do this.”

Cary voters can view the full forum, hosted by the Chamber of Commerce, online.