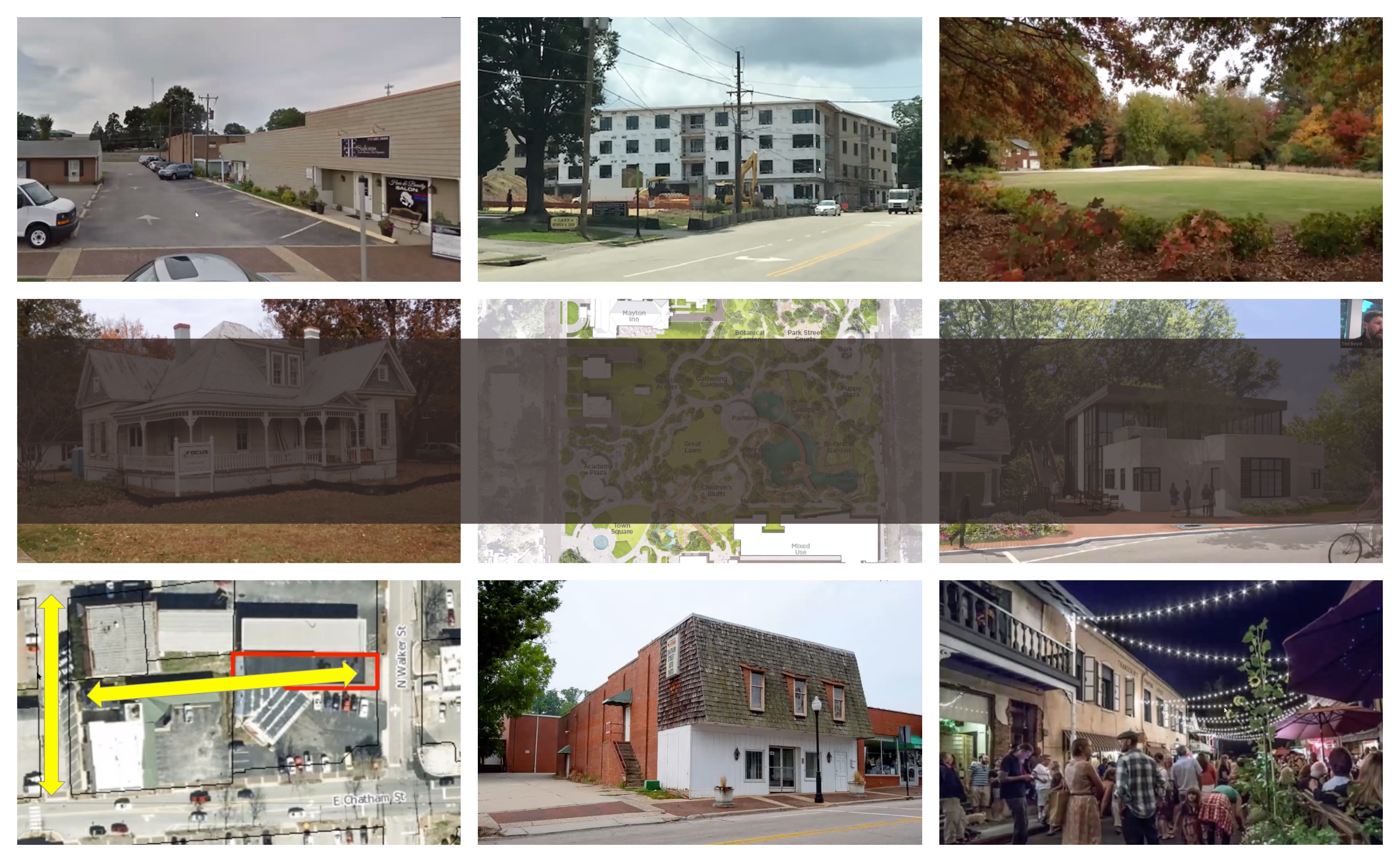 In last week’s virtual meeting of the Heart of Cary Association, Boyd presented a summary of current and upcoming developments that will continue to transform the downtown area.

A Walk Down Development Lane

From left: the building that is now The Cary Theater, the land that is now the downtown fountain and the historic Sam-Jones house before its renovation into the modern-day MC Restaurant.

Before jumping into what’s to come, Boyd offered a look through time at what Cary looked like decades ago. The lookback included the old Rogers Motel and Restaurant and the local Sunoco station where gas was just 41 cents.

As time passed, so did renovations. These included the Cary Theater property, The Cary Arts Center, the Sams-Jones House, the construction of the Amtrak Depot and the strip of empty land that now houses the iconic mark of Downtown Cary — the fountain.

With these accomplishments and more now in the record books, the Town is onto its next phase in development history with an all-new road map. Some might remember the previous guiding document called the Town Center Area Plan, adopted on August 9, 2001, which paved the way for the past improvements.

Now, the Imagine Cary Community Plan (adopted January 24, 2017) is the comprehensive outline of Cary’s vision for growth through 2040. Here’s a look at what’s on the horizon for Cary developments. 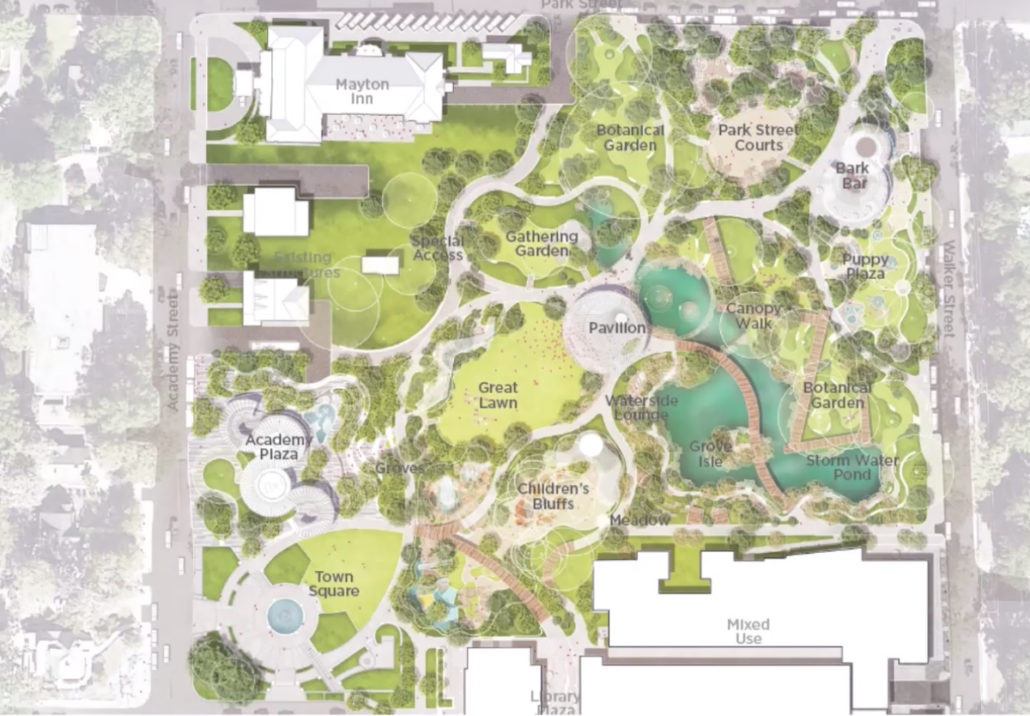 Basic construction has just begun for the large undertaking of Cary Downtown Park with an official groundbreaking ceremony set for May 2021.

“Beautiful,” “dazzling,” and “what a vision,” were a few of the comments voiced by Heart of Cary President Scott Korbin as Boyd flipped through the images of what each of the park’s sections will look like. These design renderings for the park can be seen on this CaryCitizen post.

The plan for the park includes an indoor, curated marketplace for things that might be needed by park-goers such as sunscreen or foods for a picnic. There will be water features, public art, kids slides, a botanical garden, a puppy plaza, and more.

Another development viewable from the park will be the One Walker, One Walnut mixed-use development with ground-floor retail space, office above, and a total of 153 multi-family apartment units.

“One of the most important improvements is going to be improving our streetscape. Similar to what we have on the theater side, we want to begin to see that on the northern side of Chatham Street,” said Boyd.

A project just steps away from where these streetscape upgrades would be is the expansion and new design of Rogers Alley. Connecting the existing Rogers Alley with North Walker Street, this new segment would be something more inviting and geared toward foot traffic rather than vehicles.

Adding to the utility of this choice, it turns out Cedar Street is in the right of way of the railroad. So, should the tracks ever need to expand, having this expanded roadway/alleyway would give greater access and traffic flow. 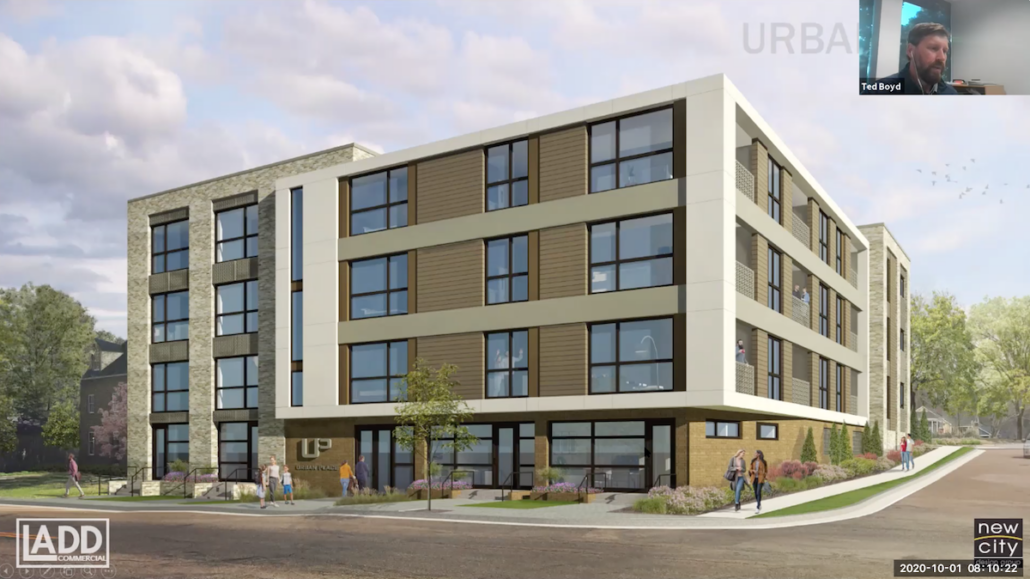 A rendering shows the design of Urban Place Condominiums.

“It’s important to add more housing opportunities within our downtown for people to be able to live and work,” said Boyd.

A project of 28 condo units, Urban Place has design underway with foundation and groundwork started beside the Chatham Walk site. 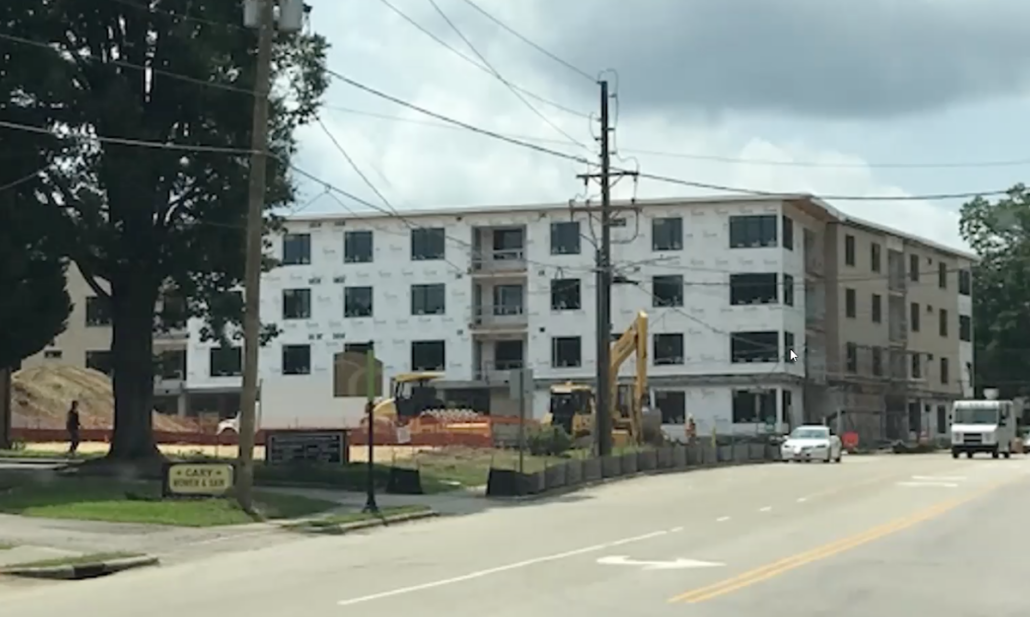 A recent image shows the progress of Chatham Walk, with equipment on-site working on the groundwork for Urban Place.

This four-story, 33-unit condominium project is located at the corner of Chatham Street and Urban Drive and is well under-way in its construction.

Just across from Chatham Walk is where the Williams House once was, which has been relocated further down East Chatham Street to make way for new development. The rendering on the right is what the site will look like at completion, with office and retail spaces available.

The development is starting to take shape with a fresh coat of paint and Boyd says this one is all about adding “new life and a modern addition” to the downtown landscape.

Story by Ashley Kairis. Photos from the live meeting, courtesy of Ted Boyd.