Cary, NC — The NHL Draft will be a virtual event, held this week on October 6 and 7, and should yield some interesting results.

Typically the Draft is held on the ice-less arena floor with teams setup with tables alongside other teams. General managers are working the floor, working landline phones, cell phones, impromptu meetings in the hallways and even meeting another GM in the restroom.

By “working,” I mean trying to get the best deal for their team. It may be a player trade, a draft pick for a player, a couple of lower picks for a higher pick. It’s constant negotiations.

In his short tenure as GM, Don Waddell has been a master of draft day and pleasant surprises. This year, the Canes will set up their ‘war room’ in the Canes locker room with adequate space for proper social distancing, and not that the PNC Arena has other team spies lurking around, does provide security.

Being virtual, it possibly also allows for more than the normal wheeling and dealing as they don’t have to whisper or have people see that Waddell is talking to a certain counterpart or two, and how frequently those talks are taking place.

Edmundson Signs with Montreal, Canes Get 5th Round Pick 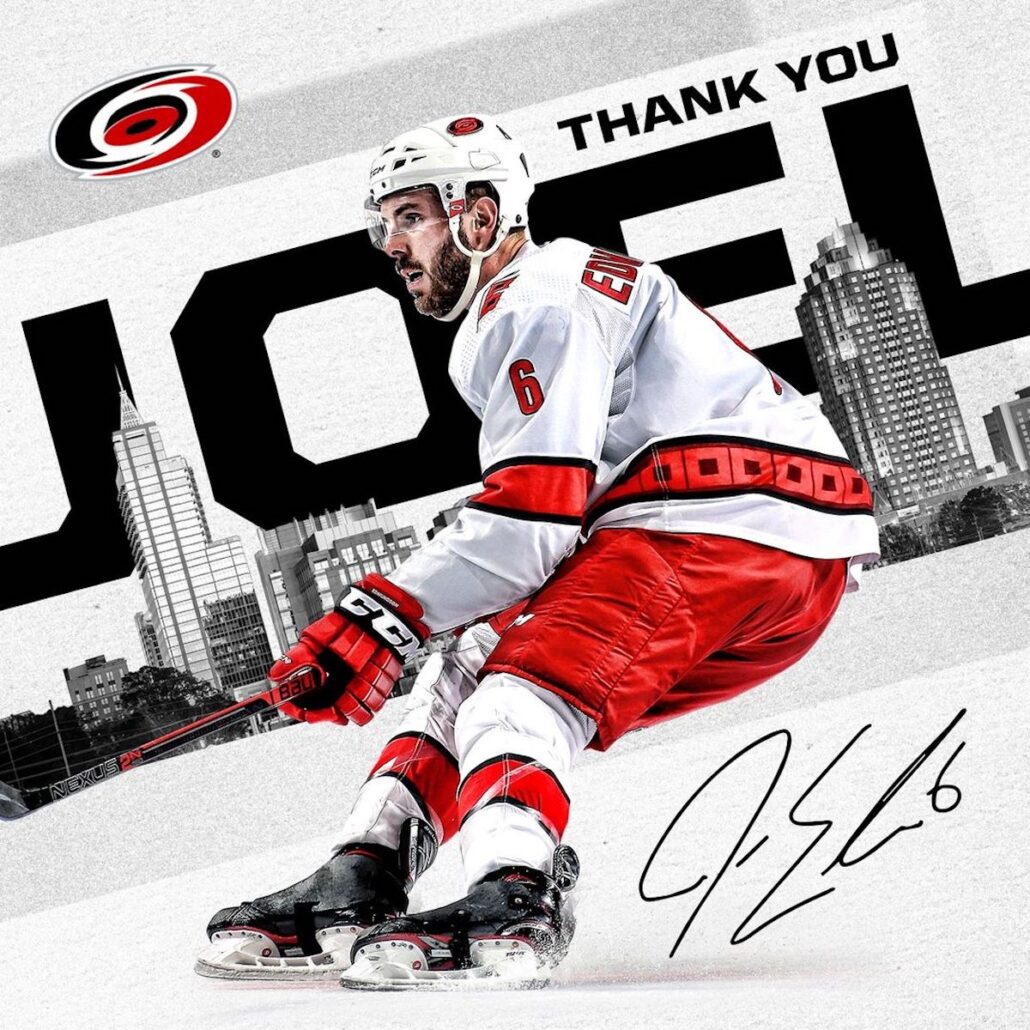 A September 12, 2020 Facebook post, the Canes thank Edmundson for his contributions to the Canes franchise in the 2019-2020 season.

Overall, those are outstanding pick spots. In nearly every case, any pick from another team, usually but not always, acquired by a trade, is positioned better than if the Canes retained their own position. The 5th round pick was just acquired by Waddell when he traded Joel Edmundson’s signing right to Montreal when everyone knew the Canes were not going to sign him. Pure brilliance!

As it turns out, Edmundson signed a nice 4 year deal with Les Habs so everyone “won’”on that deal.This year’s draft is strong and the Canes expect even if they stay at #13, they’ll get a very good prospect. Having two second round picks is fantastic. Did I mention Sebastian Aho was a second round pick?

There’s talk of the Canes drafting Russian goalie Iaroslav Askarov who some say is NHL ready at the ripe old age of 18. That’s just crazy for a goalie. Which brings up the rumors of will the Canes keep both Petr Mrazak and James Reimer, who both have another year on their contracts. Waddell has a perfect GM answer: they will look at every opportunity to upgrade every position.

The Canes have one of the deepest, if not the deepest, defensive corps in the NHL. I wouldn’t be surprised if Waddell does a deal similar to Edmundson’s, signing rights for a pick, or combine with a pick to make a trade for a top 6 forward.

The Canes are over rebuilding and are tweaking to win, not just games but the Stanley Cup.

If Askarov isn’t available there are plenty of other strong candidates. Doubtful any would break into the lineup this coming season but certainly within a couple of years.

The Canes draft team, led by Darren Yorke, believes the pause in the season allowed for more time to review films and hone in on the prospects they want. Like any plan, the deeper in the draft, the more those plans get adjusted. The Canes have had huge success over the years in every round.

Take Jaccob Slavin, arguably one of the top defensemen in the NHL, the Canes drafted him in the 4th round. One other thing the Canes do is interview not only the prospects, but also their families and former coaches. Character is a very important trait the Canes value. Slavin epitomizes great character and is a wonderful young man.

The youngest player on the team, who will be on the team for a very long time, Andrei Svechnikov, not only has great character, he has a personality even bigger. His talents have only begun.

The worst part of the virtual draft is the prospects will be missing out on one of their most memorable days of becoming a NHL player and sharing that with family and friends.

Rounds 1 and 2 have the anticipation of the player’s name being called then when it is, hugs and high fives with family then the walk to the stage, donning a new team sweater then the photo with the team representatives, usually the coach and the owner and maybe a few family members of the owner. That’s special which every player remembers, is a well deserved treatment and is truly a pity they’re going to miss that occasion.

It’s not only the draft that goes on during the draft days. There is a NHL “traded show” or “convention” in which team reps that do all the behind the scenes dirty work meet with suppliers. Wherever there is a NHL city, suppliers such as hotels, restaurants, including the important pizza restaurants which is a locker room after game staple, and transportation services. With next season start date and schedule in flux, no commitments can be made which is going to be a major challenge for the teams reps to overcome.

Free agency opens up after the draft and the Canes have both restricted and unrestricted free agents to deal with.

Good chance both RFA Warren Foegele and Haydn Fleury will sign with the Canes.

I think UFA Trevor van Riemsdyk, who was never drafted and made the Blackhawks by a tryout, will test the market as may Sami Vatanen. With Jake Bean having a great chance to break into the lineup next season, defense is a game of more quality players than there are available positions. A good problem for any coach or GM.

Then there is UFA Justin Williams. Willie can do whatever he wants, sign or retire. My prediction is retire but — with local roots, a strong like for this area and still many friends and former teammates in the area — I also think at some point he’ll join the team leadership. His experience, personality and leadership qualities are valuable assets the Canes, or any team for that matter, could use.

The season is over and congratulations to the Stanley Cup champions, the Tampa Bay Lightning, but exciting and busy times are still going on for many in the Canes organization.

The outlook for the Canes is bright, very bright. They have a solid team, should get even stronger over the next 45 days and have their sights sets on the toughest championship in all of sports, the Stanley Cup.