Cary, NC — This week’s activities were mostly related to the last regularly scheduled council meeting of the month. 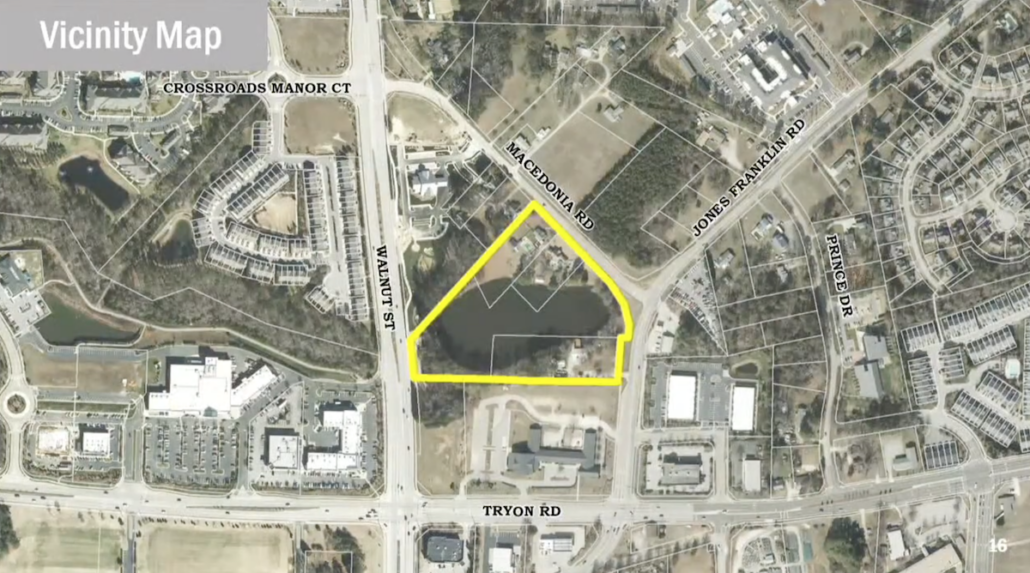 Monday afternoon I taped a message for our volunteer appreciation. In past years, the town holds an appreciation banquet for our board and commission volunteers. We hope we will be able to get back to that tradition next year.

Later in the day I met with staff to go over the agenda and discuss concerns and comments from council. Our meeting lasted about fifteen minutes. Following the agenda meeting with staff I met with the town manager for my weekly one-on-one. We talked about a Halloween message and preparations for potential protests after the November election.

Monday night I facilitated a meeting of the Wake County Mayors in Fuquay Varina. We were provided dinner and toured their new town hall building. We all talked about our recently deceased friend and former Garner mayor Ronnie Williams. Topics of discussion included Wake Mayor Association finances, the 2020 Census, the pandemic, Halloween, and the November election. We adjourned after about two hours.

Ups and Downs of the Latest Town Council Meeting 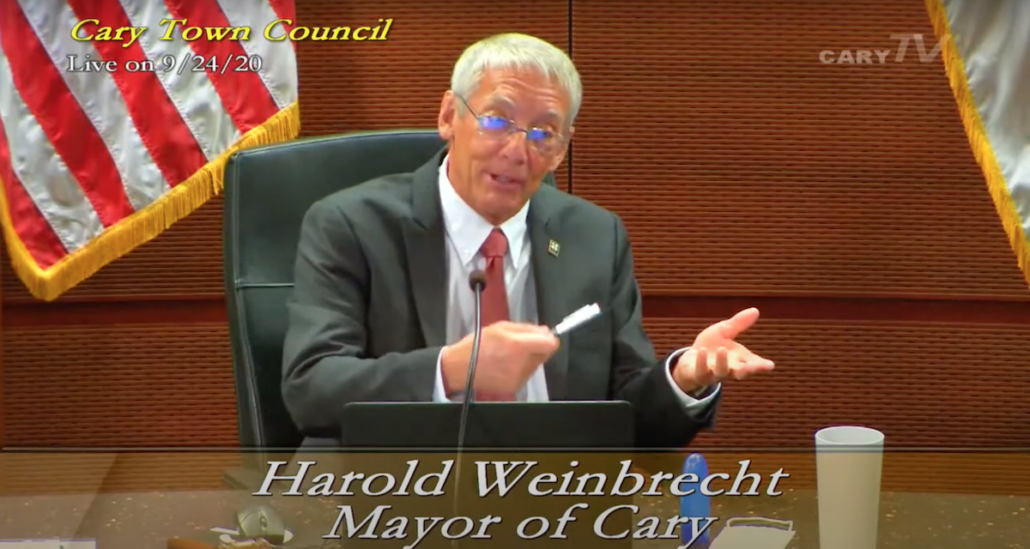 Thursday the council held its last regularly scheduled meeting of the month. The agenda included 10 consent items, 6 public hearings, and 3 discussion items. The public hearings on Lilly Atkins and the Holly Springs rezonings were removed from the agenda at the request of the applicant.

The public hearing for the Jones Franklin rezoning drew strong criticism from every council member. Their proposal would drain an existing pond and put in 275 multi-family units where the pond was located. In addition, all parking would face Walnut Street. Mayor Pro-Tem Frantz stated that this proposal was “Dead on Arrival”. While I always keep an open mind, there would need to be drastic changes for me to even consider approving it.

Discussion items included a financial update with debt refinancing and new installment purchase debt. In the financial update Director Mills noted that we would receive about $2.5 million in total pandemic relief. While this certainly helps, it doesn’t come close to covering the millions lost.

There was some good news in that sales tax for the month of June exceed the sales tax from June of 2019 by 7%. Good news was also presented on the refinancing front with a savings of about $15 million over the next several years.

Our last discussion item was the Silverton multi-family proposal which was tabled at our last meeting. Since that time, the applicant committed to hiring a consultant to study the feasibility of solar and the installation of solar panels if it doesn’t exceed $10,000. They also committed to two electric car charging stations, on-site composting, recycling for glass, plastic, and paper, and LED lighting.

These changes convinced one council member to change their mind from our last meeting. The proposal passed 4 to 3. I was a dissenting vote because I believe three corners of multi-family at an intersection is bad planning and does not match the intent of the Cary Community Plan.

The council meeting concluded after about two hours. 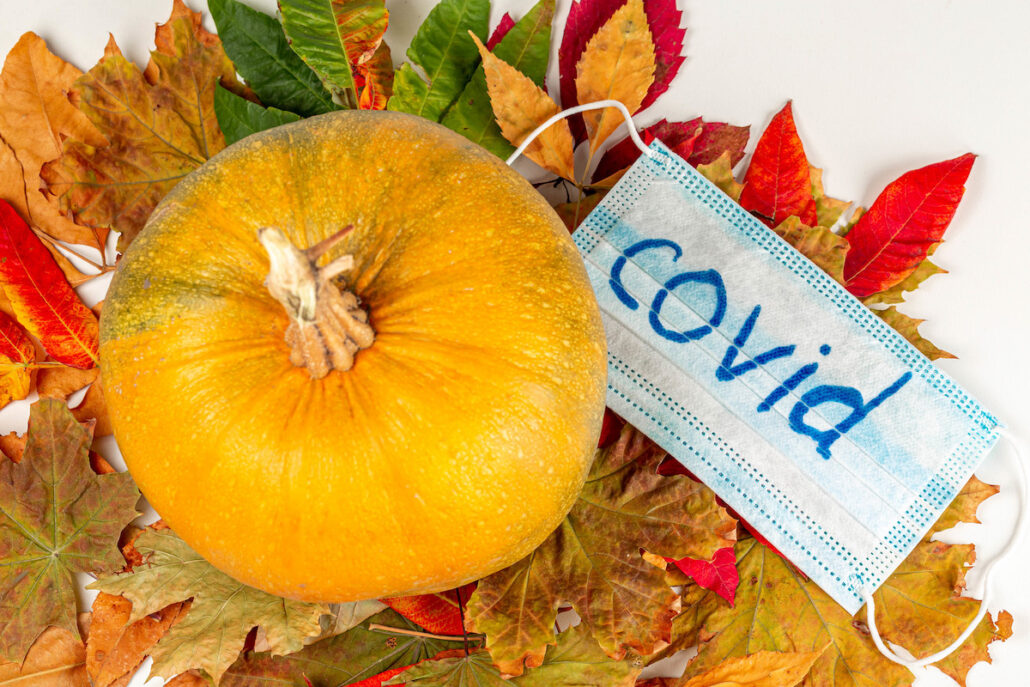 Like many local governments, Cary has avoided taking ownership over and responsibility for Halloween and other unofficial holidays.

Even so and after conferring with Mayor Weinbrecht as well as the Managers of NC’s largest cities, I wanted to share the following information with you regarding our current position on Halloween in Cary.

Our approach will be to strongly encourage our citizens to follow this guidance from the state. As has been the case throughout the pandemic, we will use education, not enforcement, to encourage safer citizen behavior. In our communications, we will also remind citizens of the common measure of turning off porch lights to indicate that they are not hosting trick-or-treaters.

At this time, we are not recommending the imposition of a curfew but will continue to monitor health and safety experts’ guidance on these matters and update you as well as our approach as needed.

On another note, I will be on vacation next week. Deputy Town Manager Russ Overton will be handling the day-to-day operations of the town while I am away. As with any other day, feel free to reach out to Russ or Susan if they can be of any assistance to you.

Enjoy your week and I will see you when I return.

The weekly operational report brings a close to the week’s activities. Please take a moment to review the highlights from this week.

Finance held successful two-hour conference call meetings with each of the three bond rating agencies as part of the bond refinancing process. The team covered topics such as the Cary Way, how Imagine Cary guides our decisions, budget process and outcomes, financial position, the impact of the pandemic, utility infrastructure, and economic development to demonstrate that Cary is worthy of maintaining our top credit ratings.

For the first time, we will have six rating reports issued at the same time –one report on our General Obligation bonds and one report on our revenue bonds from each of the three rating agencies. These reports are expected to be received by October 6.

The meeting illuminated and reaffirmed our partnership with our long-time partners, with both staff and community leaders reflecting on positive outcomes that have been achieved over the past 5 years from Building Bridges work. This meeting marked a new milestone in the partnership by welcoming faith-based and community leaders from our Latino community into Building Bridges to continue the great work we are doing in Cary.

At the federal level this week, the House passed, by a vote of 359-57-1, the “Continuing Appropriations Act, 2021 and Other Extensions Act” (H.R. 8337), to keep the federal government funded from Thursday, October 1 to Friday, December 11, 2020 at enacted FY2020 levels and avoid a government shutdown.

The vote occurred after Congressional leaders reached a deal resolving a fight over farm payments—the updated stopgap spending bill (CR) adds $8 billion in nutrition assistance programs and allows for the farm aid distributed through the Commodity Credit Corporation (CCC) to continue but with measures sought by Democrats to prohibit payments to fossil fuel refiners and importers.

The CR also includes one-year reauthorizations for programs that would otherwise lapse at the end of September, including the National Flood Insurance Program (NFIP) and the expiring 2015 FAST Act surface transportation bill. A section-by-section summary of the updated CR is available here.

The CR is expected to clear the Senate by early next week and President Trump is expected to sign the bill into law by September 30. Congressional leaders will then work on crafting a FY 2021 appropriations omnibus, or several minibus, packages during the lame-duck session in November and December in order to fully fund the federal government through September 30, 2021.

This investment into the Southeast Corridor will provide better connections between rural and urban communities while also spurring new economic development opportunities. The corridor is a network of passenger and freight rail that runs from Washington, D.C. to Jacksonville, Fla., encompassing D.C., Virginia, North Carolina, South Carolina, Tennessee, Georgia, and Florida.

Cary’s water reclamation facilities all provide exceptional wastewater treatment performance and do their part to protect the environment by removing nutrients such as nitrogen and phosphorus and returning highly treated water back to natural streams. Our facilities also recover nutrient-rich biosolids, which are beneficially reused as a soil conditioner and fertilizer in agribusiness applications. We are so thankful for our dedicated teams of plant operators who make this type of recognition possible.

We found the following report and article to be particularly interesting this week and wanted to share with you for your reading pleasure:

Pink Day Up for Votes: Charity of the Year

One of our citizens nominated Prestonwood County Club’s Pink Day for charity of the year with the United States Tennis Association. In 2019 Prestonwood raised $17,209

In total Prestonwood has raised $76,333 for the Kay Yow Cancer Fund for the last seven years. If you would like, please vote in support of this event.

Well, that is all for this week. My next post will be on Sunday, October 4th.  Although I have Facebook and Twitter accounts those are not the best means of communications with me. Please send all Town of Cary questions or comments to Harold.Weinbrecht@townofcary.org and email personal comments to augustanat@mindspring.com.

From the blog of Cary Mayor Harold Weinbrecht. Photos by Town of Cary, featured image by Marco Verch.