Cary, NC — In the September 10, 2020 Cary Town Council meeting, one public hearing was held, a bid for intersection improvements was awarded and a controversial rezoning was discussed and tabled.

Arrest Made in Cary Homicide 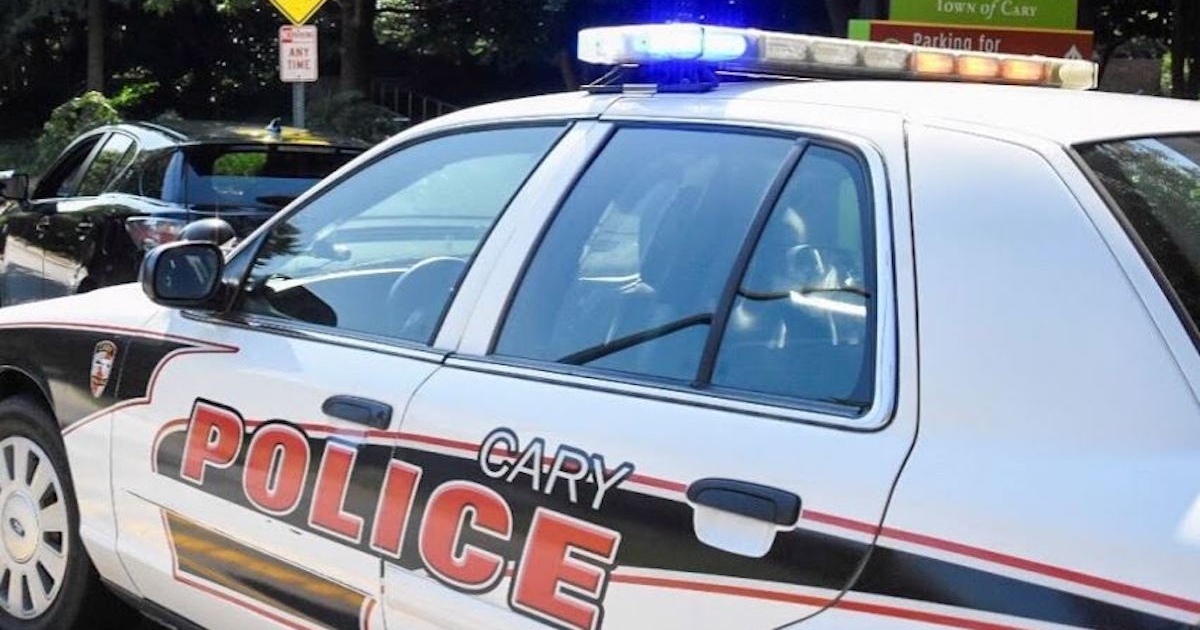 Giving thanks to Chief Toni Dezomits, Cary’s police force and the district attorney’s office, Stegall announced that an arrest was made following the August 27, 2020 murder of Selvaraju Vellingiri.

The arrest of suspect Nicholas Dalton Nanes, 29, of Raleigh was made the night of Wednesday, Sept. 9, 2020 for the Cary murder and an additional murder in Raleigh committed on August 7, 2020.

“Properly conducting a homicide investigation is among the most complex, sad and important work that is done in local government, said Stegall.

“It’s also the most confidential. It has to be, the law requires it.”

In keeping with the state public records law, Cary PD released the recording of the 911 call. Further information will not likely be released as the focus is shifting to justice in court, which Stegall says may take years.

Each project is different, but the overall goal of improvements under this bid award project is to “increase intersection capacity, upgrade pedestrian and bicycle crossings and improve safety for all road users.” To make this happen, the project would include:

Councilmembers Jennifer Robinson and Ya Liu expressed their happiness with the projects, particularly the improved safety on the High House corridor where many high school students use the pair of intersections.

“There will be a lot of very happy citizens,” said Robinson.

The council unanimously awarded the project construction to Fred Smith Company at a base bid of $3.08 million. For details on the plan for each intersection, visit the project page on TOC’s website.

The final topic of the night was a rezoning request discussed for more than half of the hour-long meeting.

The request, if approved, would allow up to 60 multi-family residential units on 2.24 acres of the Silverton planned development district at the intersection of NW Cary Parkway and Evans Road.

According to the staff presentation, that’s approximately 27 units per acre with a maximum height of 55 feet. Parking would allow 1.77 spaces per unit.

This zoning request has been tabled before and the developer has offered to make environmental and aesthetic changes to the project including options for electric charging stations and on-site composting, a solar conduit for future solar panels, higher quality buffers, building materials, public art features, structured parking under the residential units and a larger than required gathering area.

This request was voted as being consistent with the Imagine Cary Community Plan by the Cary Planning & Zoning Board with a unanimous vote of 8-0, but did not receive similar support from Town Council.

Weinbrecht, Yerha and Bush Not in Favor 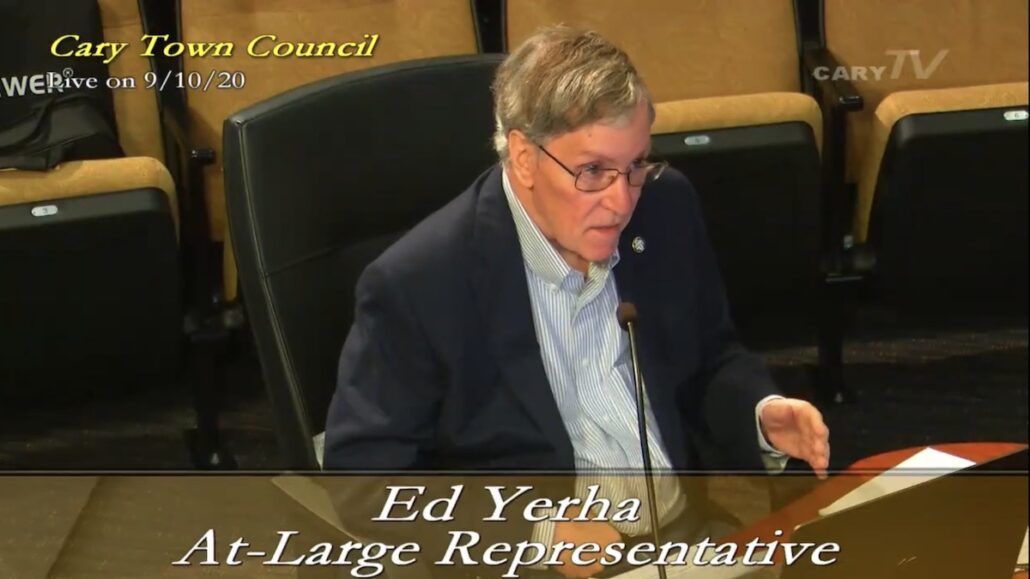 “My gut feel is that if you asked all of the residents that were involved in creating the Cary Community Plan, I’d say most of them would not agree that three corners of an intersection should be multi-family and that’s what this does,” said Mayor Harold Weinbrecht.

Councilmember Lori Bush also wasn’t in favor, pointing out a concern of reduced streetscape footage from 50 down to 20 and 30 feet.

“We’ve been very clear that streetscapes are important to us, especially in this corridor,” said Bush. “All of the compromises are great and I really applaud this applicant and I’m really trying to get there, but I just can’t support it at this point.”

Councilmember Ed Yerha claimed that a non-residential use would better serve the many nearby residents.

“This is not a very complicated rezoning and neither is my reason for opposing it. I simply believe that the existing zoning is more appropriate than the proposed zoning,” said Yerha. 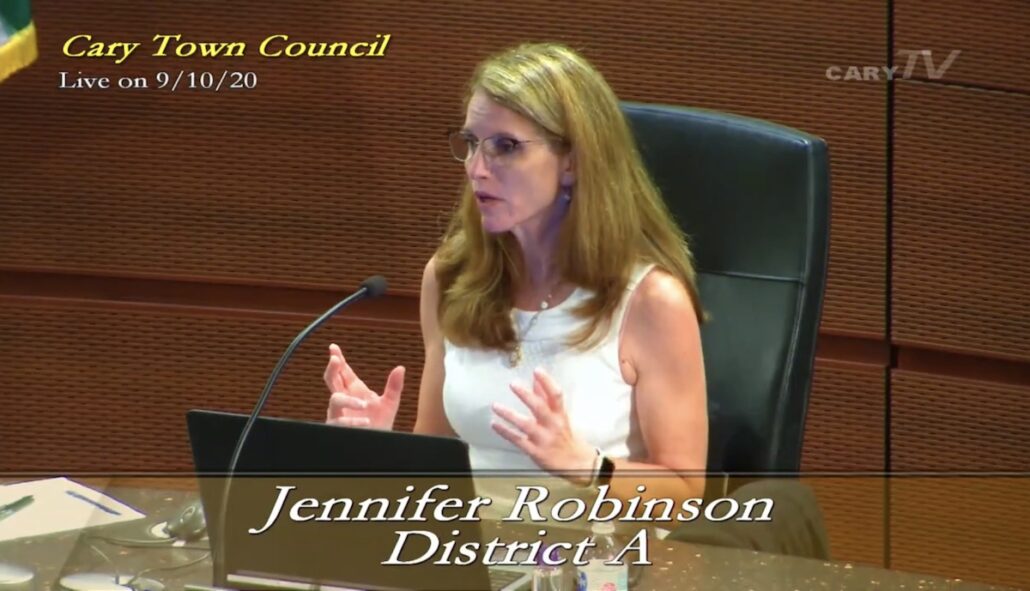 Mayor Pro-Tem Don Frantz appeared to be the most adamant supporter of the rezoning. He noted that it’s a small parcel, has been on the market for decades and that the added conditions “check the boxes” of the council’s ideal expectations for multi-family developments.

Councilmember Ya Liu added herself to the pro-side as well, siting the environmental additions as the selling point.

“I want this to be a model development project we can be really proud of. I think this will encourage more developers to demonstrate their commitment to the environment,” said Liu.

Robinson added her piece, saying, “I think in this situation when you look at the totality of the site and what they’re offering then it gets me over that buffer and I don’t mind having multiple corners with multi-family.”

It Came Down to Smith 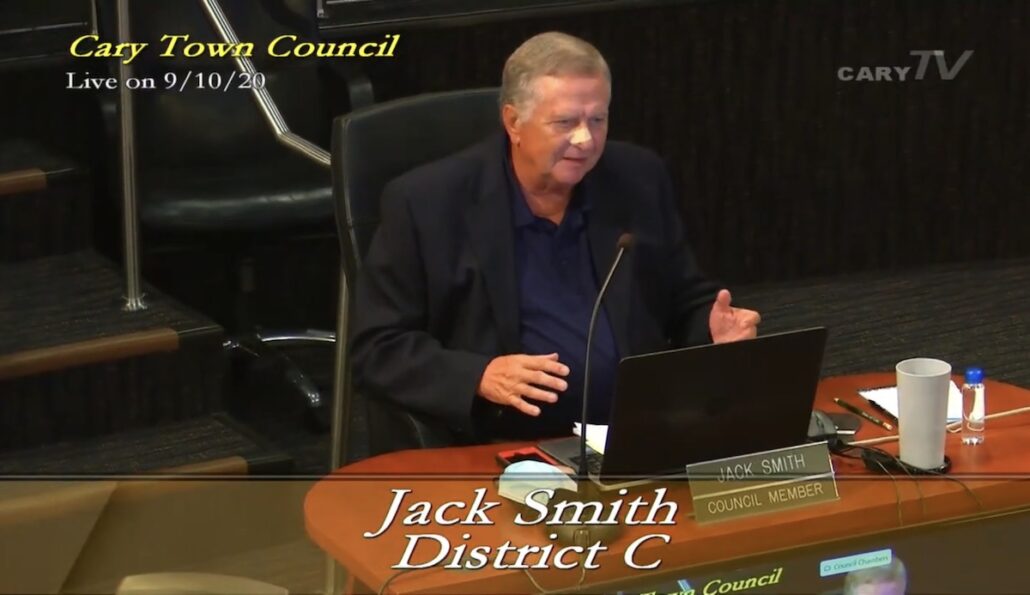 With split votes before him, the tie-breaker became councilmember Jack Smith. His comments related largely to the topic of the solar panel potential for the site.

“Putting the conduit in is almost like too little, too late,” said Smith. “If we’re going to go into a rezoning then I want those panels on the roof. I want to see a more direct commit to all those things that we do for our environment.”

He continued on to say as the world changes, Cary’s bar needs to be moved up.

The solar panel discussion became a point of contention with Frantz saying,

“I’ve only been here 12 years, but I don’t ever remember us tabling or denying a multi-family project because they didn’t put solar panels on the roof.”

Not wanting to get “lost in the weeds of solar panels,” Smith said, “It’s really as simple as do all of these features merit us changing the use and that’s a personal decision.”

The council moved to table the rezoning indefinitely with a vote of 5-2 and the option for it to return again at a later date. Mayor Pro-Tem Frantz and councilmember Yerha voted against tabling. The applicant was also fielding the council’s comments and questions and has committed to investigating the solar panel possibilities — though it is something that has never been done in the Town of Cary on a multi-family site.

The night’s one public hearing was held for land requested to be annexed into Cary’s incorporated town limits. The property is 13.23 acres at 1612 Cavalcade Drive slated for a residential subdivision of 23 lots with a maximum density of 2 units per acre.

With no submitted comments and no call-in speakers, the annexation will be voted on in a future meeting. With no closed session, the meeting adjourned at 7:36 PM.

The next regular meeting of the Cary Town Council will be at 6:30 PM on Thursday, September 24, 2020 and is streamed live on the Town’s YouTube Channel, Facebook page and on CaryTV.

Money Matters: Budgeting for a Baby
Scroll to top