Cary, NC — For the second year in a row, the Canes season ended with a playoff round loss to the Bruins. The Canes couldn’t hold on to a 1-0 lead, eventually losing 2-1.

Special teams were the key in this game, as well as the series, as the Bruins scored on their first 2 man advantages while the Canes again went scoreless in their 3 attempts. While the Canes D-men are as deep as any top shelf team, there’s a big void with Brett Pesce out as he’s such a prominent force on shut down defense.

Likewise, Andrei Svechnikov has found his groove on the powerplay while keeping the puck on his stick like a magnet waiting to send a laser to the net. Both should be 100% for next season. It seems the only glimmer of looking at this in a positive light is now there’s no reason to chance returning too early before fully recovered.

The Canes came out with a purpose to start the game as speed and forechecking, the usual signature items of a Brind’Amour team, were much better than the Canes last time on the ice. Passing was much better and everyone was physical and had the extra step that was missing for the last 15 minutes of the previous game.

Petr Mrazek was in goal and was very sharp in stopping a point blank shot from David Pastrnak after a rare turnover by the Canes in their own end. The big change I noticed was Roddy scuffled the lines a bit and also put the Trocheck line as the second line and the Staal line as the third line.

Staal is a beast and it would  almost take the Zamboni to knock him off the puck, but Trocheck is a much faster skater, a highly skilled shooter, and like Staal, very good defensively. Midway in the period the Canes’ Teuvo Teravainen gained control in the neutral zone, passing back to the defense to set up a play.

Jordan Martinook took a pass from Haydn Fleury just before the Bruins blue line, made the entry then laid a drop pass to Sebastian Aho, and quickly went to the front of the net. Seabass faked a pass cross ice, then flipped a soft backhander to Fleury on the left point. Fleury took two strides, then launched a wrister into traffic that hit the far post, center support and exited the goal without the ref signaling a goal.

Replays confirmed it was indeed a goal.

Bruins Make it 2-1 in the Second

Both teams played heavy hockey in the second with bodies flying after bodies, Sticks breaking like twigs and battles in the corners becoming mini scrums. Shot selection by both teams early in the period was just to get rubber to the net and hope for the best. The jostling for position in front of each crease was overshadowed by the checking along the boards.

Jaccob Slavin who is like a sleeping giant on the ice—quiet, not much flair, but highly effective—as he was having a stellar game. The Canes had chances, but just couldn’t get the puck with the right trajectory as many shots looked as if they’d be a goal went high, wide or both.

Late in the period, with both top lines on the ice, the Canes were pressing deep in the Bruins end resulting in a high clear that went to Patrice Bergeron for a breakaway. Seabass turned on his jets and hooked Bergeron just as he shot, killing the scoring chance but getting a penalty. The Bruins powerplay is stacked and with just seconds left on the penalty, had a tic tac toe play that resulted in a goal.

Not much later, Martinook got called for a boarding call that both Marty and I questioned. No question it was a hard hit, a very hard hit, but the player was facing to the side at the initial contact, not facing the boards. If there was a question of a dirty hit, which is not Marty’s style, the Bruins would have circled the wagons around Marty and that didn’t happen.

With 4 seconds left in the period, Mrazek redirected a Bergeron shot to the back boards. Bergeron retrieved the puck and flung it to the net with the puck hitting Mrazek’s left skate, ricocheting in the net. It was a killer goal and it put the Canes’ season on the line for the next 20 minutes. 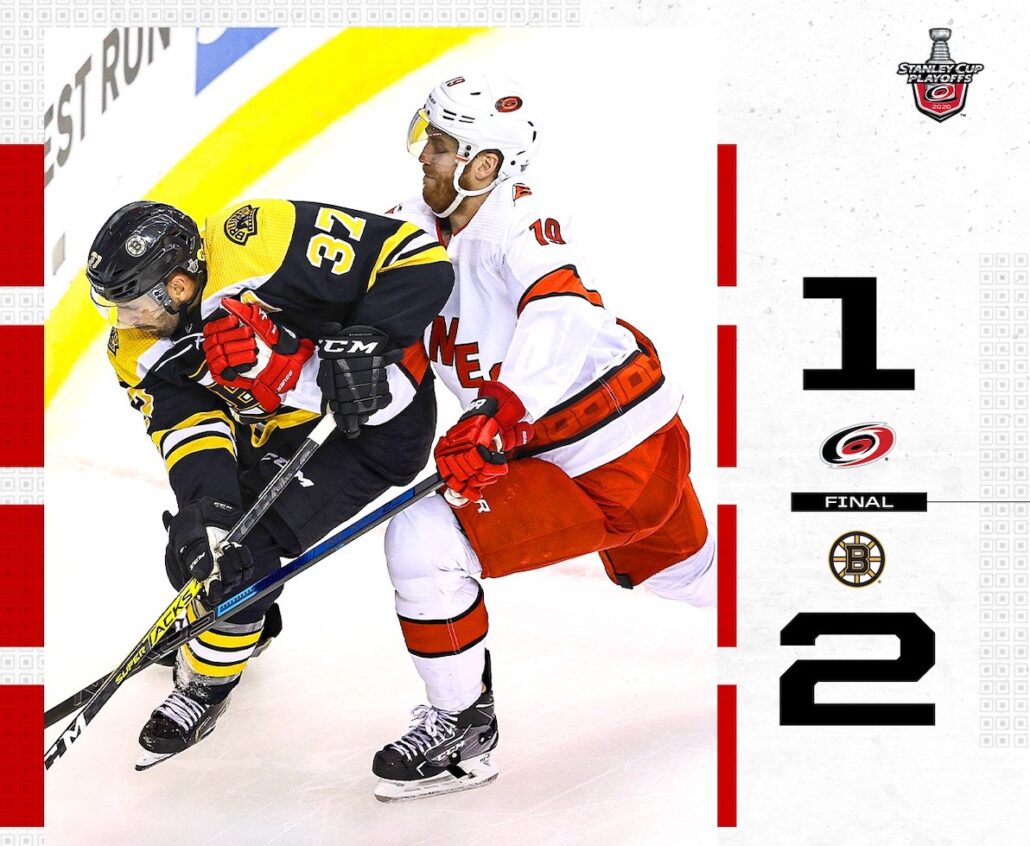 Dougie Hamilton of the Carolina Hurricanes fights for possession with Patrice Bergeron of the Bruins.

If only the Canes could have played this entire series as they played the third period. There was no quit on this team.

Where the Canes were fast on the puck defensively in the first two periods, there were two Canes attacking the puck at every opportunity. In the offensive end, the passing was crisp, on the tape, players were constantly moving, there was always a forward in the dirty area, when a defenseman jumped in the play a winger quickly filled in up top.

It was typical Brind’Amour style of great hockey to watch and was how the Canes did play most of the season. The Bruins didn’t really turtle in the third but didn’t take any risky chances either. No defensemen wandered 3 feet inside the Canes blue line and when the play was on the right side, the left defenseman cheated towards the neutral zone to stop any breakaway. All signs of a good team and I suspect the Bruins will meet the Tampa Bay Lightning in the Conference finals. My prediction is whoever wins that will be the Stanley Cup champions.

It was a very depressing way to end the season for the Canes as they are such a fun team to watch, and agreeing with Justin Williams, they had so much more to give.

Speaking of Williams, after 1,425 NHL games, it’s a good chance that was his last game. He may take some time off but with his
friendship with Roddy and leadership skills, don’t be surprised if he ends up on the Canes payroll in some capacity. Continue to look for periodic Carolina Hurricanes updates here on CaryCitizen.news.