Cary, NC — Second-year player Andrei Svechnikov, had a franchise first, by getting a hat trick in a Playoff game, as he led the Canes to a solid 4-1 win over the New York Rangers.

With the win, the Canes are now 2-0 and have a commanding lead in the best of 5 series. These two wins are the first consecutive wins over the Rangers in a very long time.

Once again the Canes wasted no time in getting on the scoreboard for the early lead. Sebastian Aho carried the puck off from his own blue line into the Rangers end feeding a pass through his defenders’ legs to a streaking Svech who quickly settled the puck and in a snap wrister past Henrik Lundqvist for the 1-0 lead.

The Rangers answered eight minutes later with a 5-on-3 powerplay with Haydn Fleury and Seabass in the sin bin. The Canes killed the balance of the 5-4 powerplay with the momentum clearly swinging towards the Canes.

Their forechecking and positioning both offensively and defensively was excellent throughout the lineup. Petr Mrazek was in goal again and was very much into the game being both vocal and animated between the pipes. There is always mutual respect among players but as the game went on, it was becoming clearer, respect is completely different than liking, as cheap shots were given by both teams.

Both Mrázek and Lundqvist were sharp, especially with their gloves. The Canes’ entire defensive corps did a fantastic job clearing the lanes allowing Mrázek clear sight of the puck. His rebound control was spot-on accurate today.

Svech’s Laser Puts Canes Back Up By 1, Martinook Makes It Up By 2 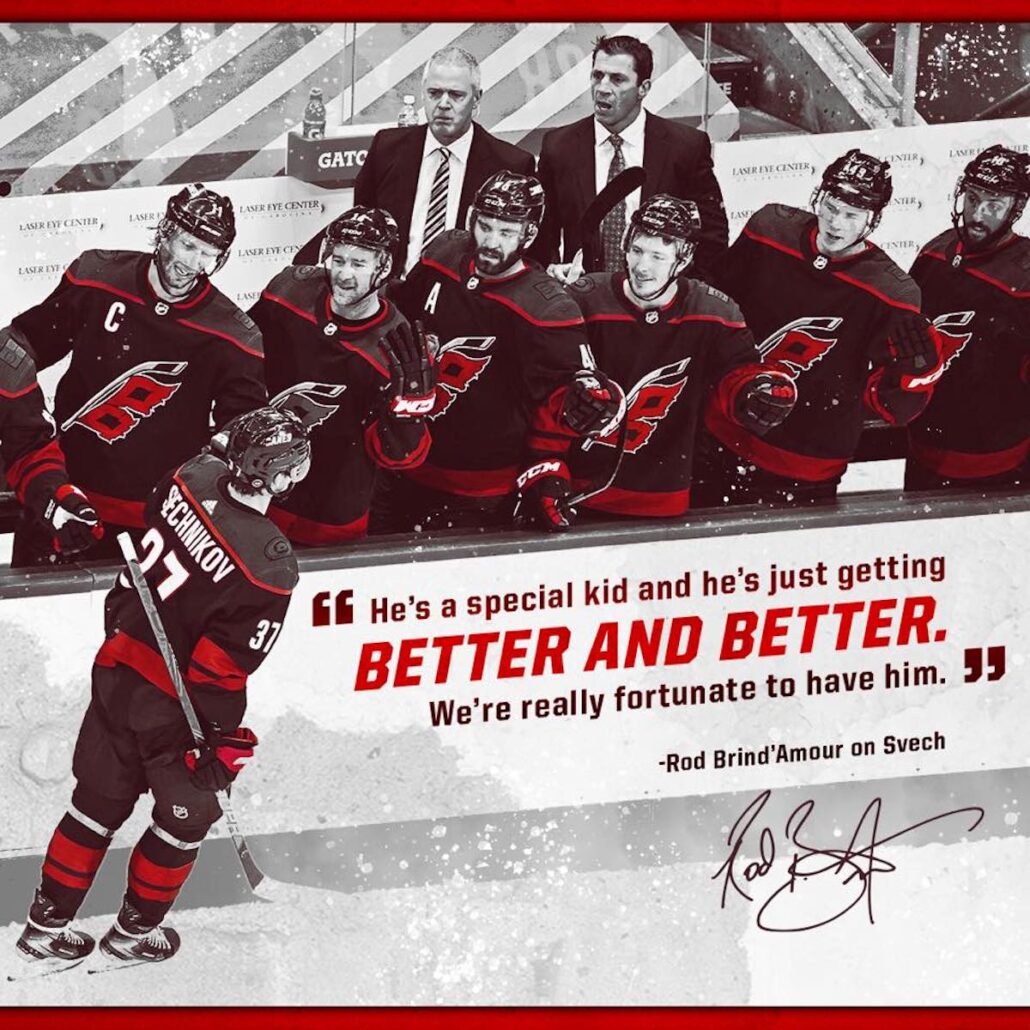 Seabass won the faceoff, drawing the puck back to Sami Vatanen on the left point. Vatanen passed over to Svech who unloaded a howitzer of a blast into the far upper corner for his second of the game. That was all of just 3 seconds into the powerplay.

Two shifts later the energy line of Morgan Geekie, Brock McGinn and Jordan Martinook were ragging the Rangers deep along the boards behind the Ranger goal. Jaccob Slavin caught an attempted clear, put the puck on his stick passing over to Ginner along the near half boards. Ginner flung the puck along the boards to behind the net where Geekie got tangled up but managed to skooch the puck to left of the crease.

While he was doing that Marty went around the other side of the net then Geekie used his long reach, knocking the puck over to Marty who was in the dirty area of the crease, lifted the puck high top shelf for his first career playoff goal and putting the Canes in the driver’s seat.

Both teams did not let up on the gas as play was constantly up and down the ice but it appeared the Rangers were starting to get frustrated so much that Pavel Buchnevich and Marty exchanged pleasantries at the buzzer setting up the third to start 4-on-4.

Svech Gets Hat Trick, But No Hats 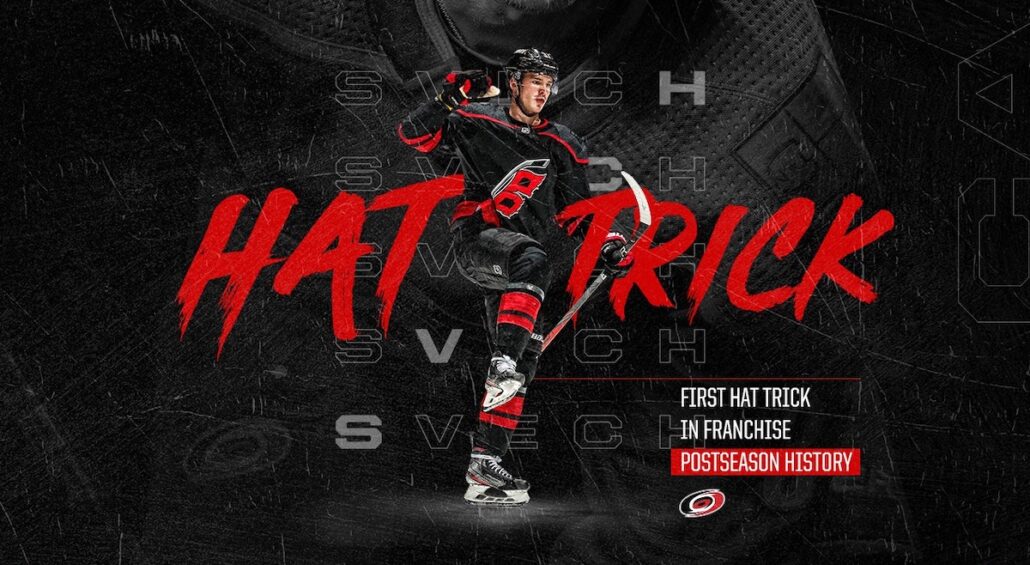 The refs changed tactics for the third as they could see the game getting ugly and frankly neither team is built for back street hockey. Justin Willians got called for a weak, but legitimate interference call. But seriously, what he did could be called on half of every play.

It’s tantamount to an NBA official actually blowing a whistle for traveling. Every player travels, it’s all but accepted so when it’s called, players are confused, even though they broke the rule.

The Canes penalty kill, when down one man again, was perfect against a Ranger powerplay that is stacked. Jordan Staal and Vincent Trocheck were both solid on faceoffs. Getting possession off a faceoff in either zone is so critical and these 2 were strong. Just based on these first 2 games, the trade deadline acquisitions by GM Don Waddell have had an impact.

About three quarters through the period, Seabass made a great defensive steal at his own blue line, flipped the puck into the neutral zone then took off for the races. Svech joined on the left and as the defender went to cover Seabass, he flipped the puck to his left where Svech was charging then spanked the puck up high for the Canes first-ever playoff hat trick.

With no one in the stands, and the Canes the ‘home team’, it was the first hat trick that had no hats thrown at a home game. Next season during warmups for the first game, toss out a hat (spread the word!)

Coach Rod Brind’Amour had to be happy with the entire team effort and will stress this game will all be forgotten come the next game on Tuesday night, so he’ll expect a similar performance.