Cary, NC — The Carolina Hurricanes gutted out a full team win in the first game of the 2020 Stanley Cup Playoffs, even though the NHL is calling these first series a Qualifying round.

The normal playoff overtime rules apply so call it whatever you want, it’s still win and go on, lose and go home. Even the Stanley Cup logo is on center ice so call it what it is.

The Canes beat a good Ranger team 3-2 with special teams doing (most of) their job, with the penalty kill units posting a perfect 7 kills. The one special team error was late in the third with the Canes on a power play that could have ended the game by another goal or at least eating up the full 2 minutes, gave up a short-handed goal to pull within 1 with over 2 minutes left to play. 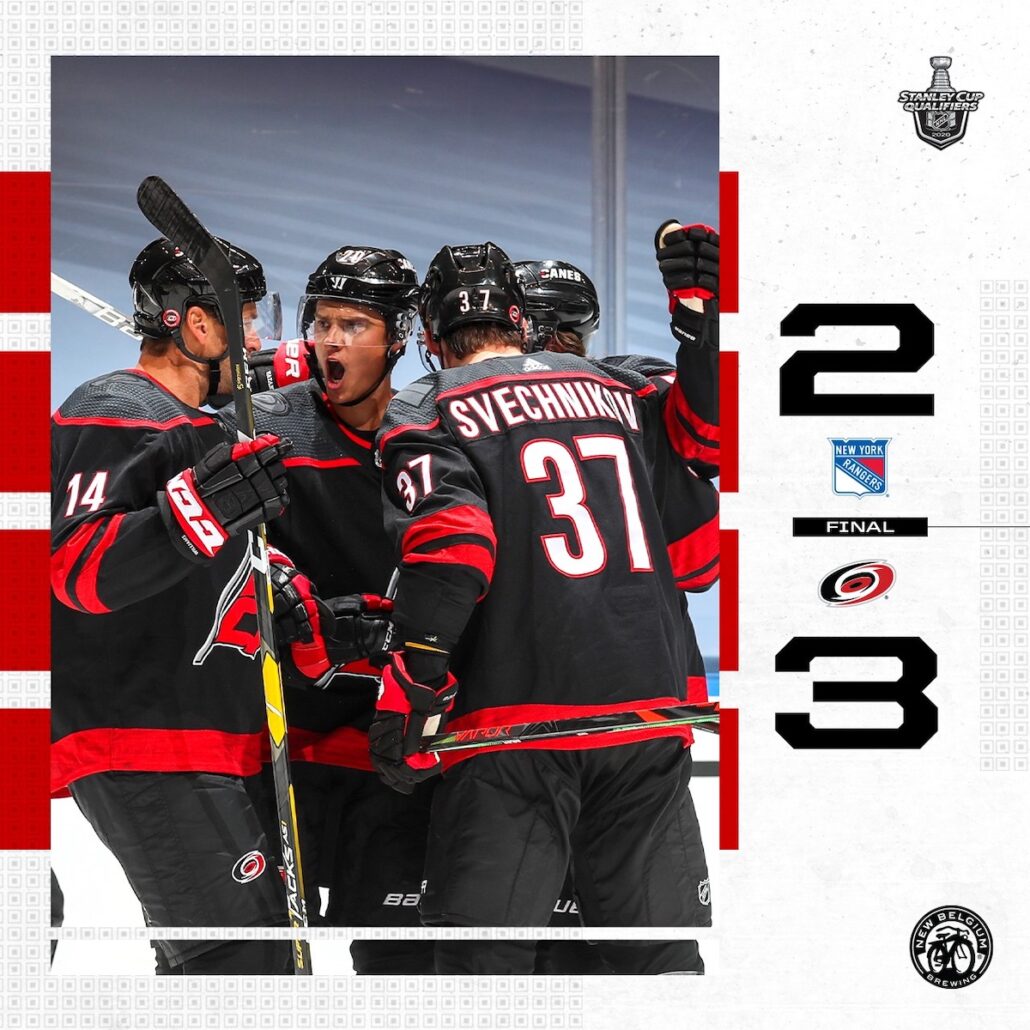 The Canes struck early, just 1:01 into the game on a pretty play by Jaccob Slavin off a cross-ice pass from Teuvo Teravainen.

With the Canes pressing from the first drop of the puck, the defense got the puck deep that was retrieved by Sebastian Aho. Seabass carried the puck behind the net shuffling it over to Turbo at the far half boards.

Slavs was unmarked on the opposite corner and gave a head nod to Turbo he would go to the net. Turbo made a perfect pass to Slavs’ tape who put it high off the right shoulder of Henrik Lundqvist. If that pass wasn’t on Slavs stick, the Canes could have seen a 3-on-1 going the other way.

That play happened shortly after Brady Skjei, acquired from the Rangers at the trade deadline, flattened Jesper Fast, knocking him out of the game on his first shift. You could sense the tension by the players as there were 6 penalties called in the first 5 minutes of play topped by a minor scuffle between Justin Williams and Ryan Strome right in front of the Canes bench. Not Willie’s style, but anything to pump up the team.

There were 3 more penalties the remainder of the period with the Canes taking two. While the warmup game everyone had midweek, some of the penalties were due to timing and not being in game situations for nearly 5 months. 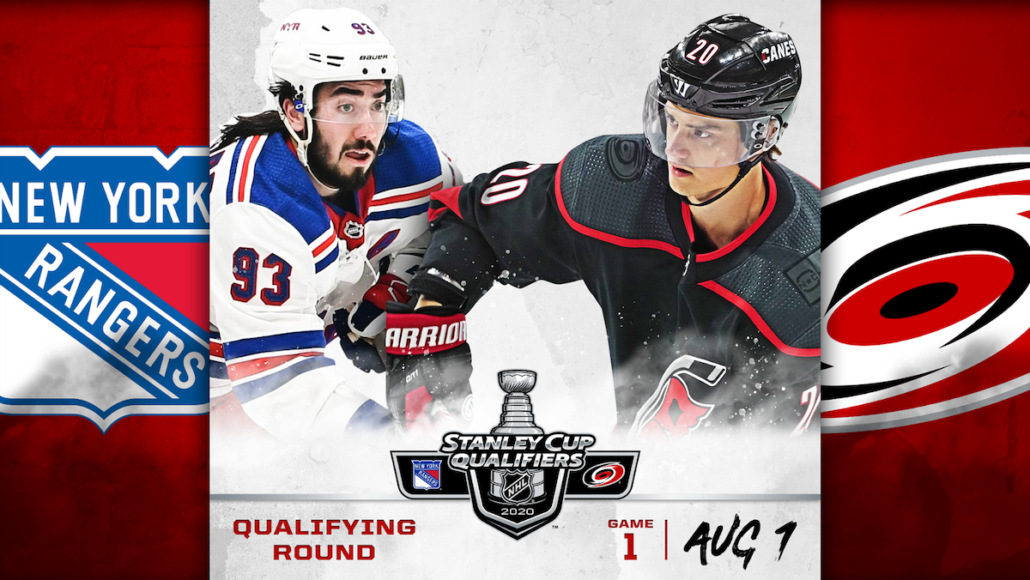 Both teams initially appeared to settle down to hard nose hockey in the beginning of the second period. Play was going back and forth with both goalies stopping everything thrown at them and playing the angles well.

With Skjei knocking Fast out of the game, unwritten hockey player rules went into effect with the Rangers wanting revenge. They selected Martin Necas as the targeted player.

It could have been they thought Necas would be the most vulnerable as he missed the last few practices in Raleigh with an unspecified injury or reason. Twice he was blindsided but was able to get up and keep playing.

Several teammates, most notably Joel Edmundson, would skate by with a few words about strongly following social distancing. The Canes were on another powerplay after Brett Howden slashed Jake Gardiner. The first unit was out and had some of the best Powerplay passing they’ve done in a long time. Passes were on the tape and more importantly, quick.

No one held the puck for even a half-second, keeping the Ranger defense heads’ spinning.

After taking a pass from Sami Vatanen, Andrei Svechnikov wasted no time in centering the puck in the low zone with Willie and Seabass jostling for position. Seabass angled his stick to tip the puck past King Henrik for a 2 goal lead. The Rangers answered about 8 minutes later when pure goal scorer, Mika Zibanejad, tipped in a shot by Ryan Lindgren.

The rest of the period was tightly played as evidenced by typical tight-checking penalties of holding or tripping. 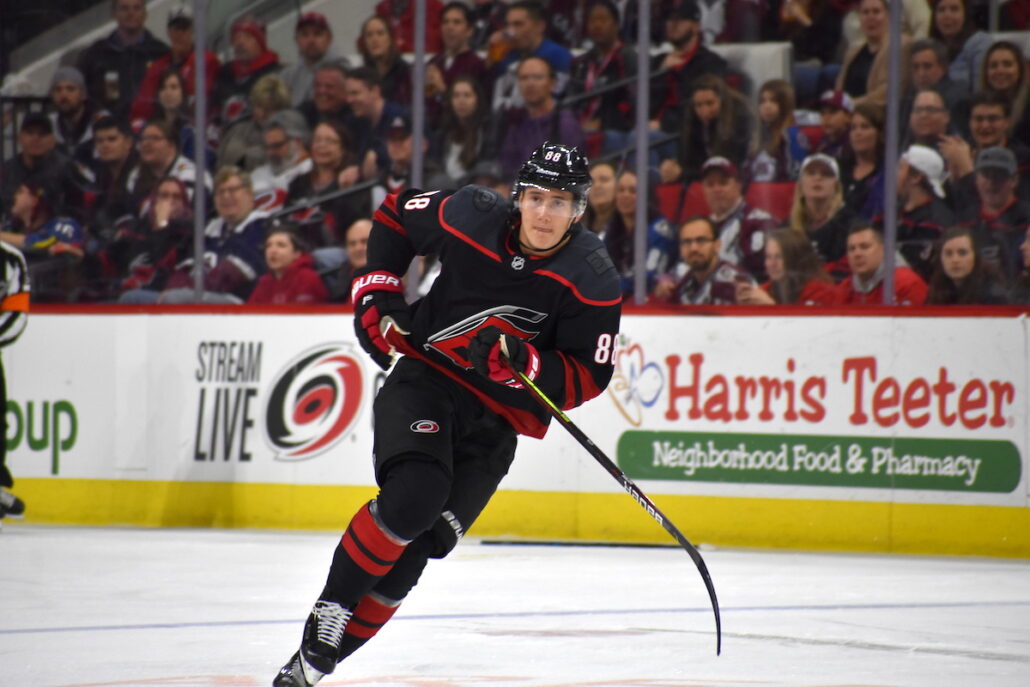 Both coaches must have emphasized the importance of staying out of the box as the tight-checking loosened a bit. Players weren’t shoulder-to-shoulder but certainly within arms reach.

Midway in the period with the Canes on the attack, Slavs passed the puck to Nino Niederreiter in the mid slot then passed back up to Necas filling in on the left point.

Necas, a gifted forward with a bright future for the Canes, saw both El Niño and Vincent Trocheck in the dirty area of the crease, then sent a low, hard slap shot that hit Marc Staal’s toe and went past Lundqvist for another 2 goal lead.

With just over 3 minutes to go, Tony DeAngelo made a dumb play on Seabass and got the call for interference. While the Canes had the man advantage, it was the Rangers that were the aggressive team and had all 4 skaters in the Canes end passing at will.

Last pass was to Marc Staal at the top of the slot sending a slap shot into traffic that found the back of the net. After the faceoff, the Canes were still not interested in taking a shot but played four corners to burn time.

After the penalty ended, the Rangers put 6 skaters on the ice just to make the game exciting to the end. It was, but the Canes defense did a good job shutting down any real threat.

Great start to this series, making game 2 all that more important for both teams. The next game is Monday at noon, watch it!