Cary, NC — For 17 years, Melissa Poppe has poured her passion, her techniques and her energetic teaching style into the lives of students at Cary’s Green Hope High School.

Growing up in Knightdale, Poppe gravitated toward science and was on her way to the medical field until she took her first art class in high school. While putting extra time into an art project after school, Poppe saw a student struggling and offered help and advice. It was that day that one of her teachers made the prophetic statement — “You’re going to be an art teacher one day.”

Sure enough, Poppe went on to earn a BFA in Art Education from UNC Greensboro, becoming a teacher just like her mother. In the fall of 2003, Poppe started as Visual Arts teacher at Green Hope.

Since that day, Poppe has only grown in her leadership and involvement, now serving as the school’s Fine Arts Department Head. Further, Poppe was named the president-elect of the North Carolina Art Education Association in November 2019.

Adapting to Virtual Learning in a Pandemic 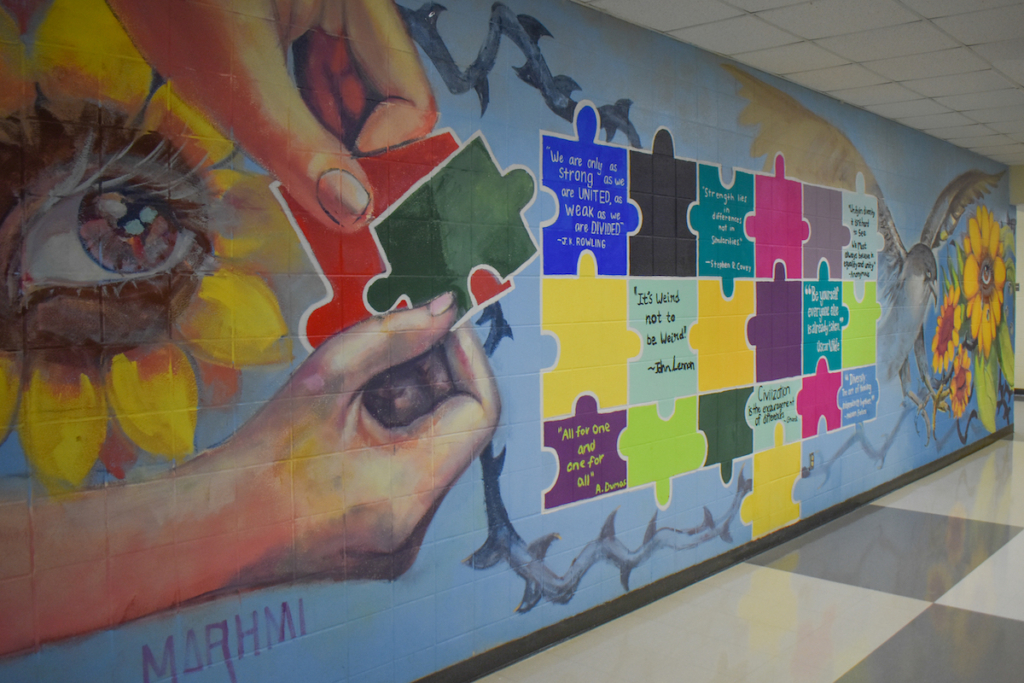 This Green Hope mural was painted by students with the help of an international artist visiting from the Dominican Republic in 2014.

The last day of in-person classes for schools across the state was Friday, March 13. Immediately Poppe had to navigate how to shift the experience of an art class online and establish what parts of the curriculum were most crucial. It was during the second week of April that Poppe and the rest of Green Hope’s teaching staff launched their virtual classrooms via Google.

“I am so proud of the students for how engaged they’ve been and for all the art they made during this time. I can’t tell you how proud I am of them for staying with it,” said Poppe.

Her approach to online classes stayed true to the elements of her in-person style which involves discussions, music, games and goofiness.

“We had so much fun and it was the camaraderie and community that I try to make in the classroom that I didn’t know if it could transfer over to remote learning and it did. That has definitely been one of the highlights of this time,” said Poppe.

As the start of a new school year approaches, Poppe says the Green Hope team will be planning for everything and hoping for the best, despite all the unknowns.

“No matter what, we’re going to be there for our students and we’re going to make it the best opportunity and experience we can for them,” said Poppe.

Celebrating in Style – The Senior Salute 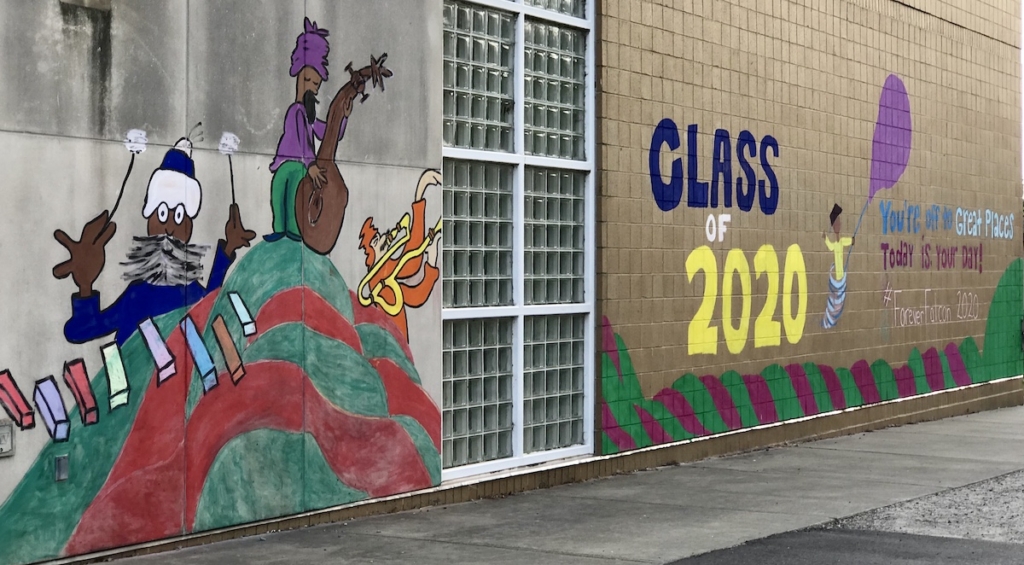 Colorful, playful murals were painted on several sides of the school to create a fun send-off for the seniors.

In the absence of a the celebrations usually held for seniors like prom, graduation and various other banquets, the Green Hope staff came together to plan a parade-style event they called the Senior Salute.

“It was meant to be for the kids to come back and say goodbye to the school and their teachers. What was wonderful was it also became an opportunity for the teachers to have closure as well,” said Dr. Camille Hedrick, Principal at Green Hope.

Hedrick credits much of the event’s success to Poppe and her larger-than-life idea to decorate the walls of the school with chalk paint murals. Following approval from Hedrick, Poppe sent an email to see what the staff thought of it.

“Within an hour, I had 30 staff saying they were ready to help,” said Poppe.

On May 20, students drove through campus and were thrilled to see the immense and thoughtful murals created for them. Many even returned later to take selfies with the art. It was another Visual Arts teacher, Megan Shawkey, who brought the theme of Dr. Seuss’ “Oh, the Places You’ll Go” to the event. 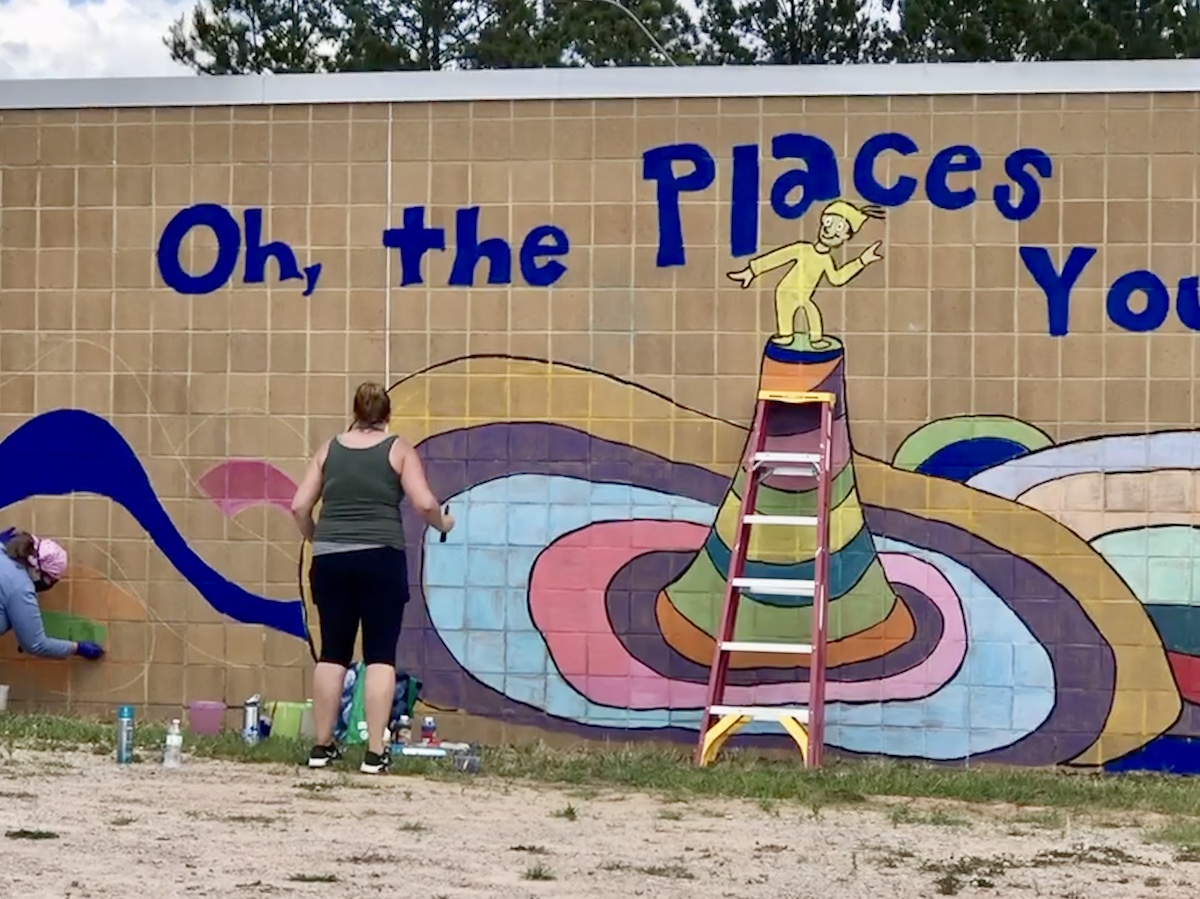 Shawkey said despite the rain and the challenges of the murals, Poppe kept a positive attitude and as always, came up with creative solutions along the way.

“Her whole thing was that she wanted the seniors to know we care about them and that we understand it was a rough situation for them this year, but we wanted to give them a bright spot,” said Shawkey.

Fostering A Spirit of Collaboration

Green Hope’s Director of Theater Arts, Jamie Gorski, has worked with Poppe for the past 8 years and says her greatest contributions to the school are her collaborative nature, her dedication to students and her enthusiasm for learning.

“There are very few teachers willing to step outside the box or outside of their comfort zone to find ways to make connections with other disciplines,” said Gorski.

“She will work hard to show, for example, that a core class can be enriched with arts and art studies. I think that is something that has really made her stand out in our faculty.”

Thinking back about 5 years, Gorski can remember directing a student play he wrote as an adaptation of Dracula. Searching for some assistance, he asked Poppe to help with set design and it was a quick yes. Poppe went above and beyond, pitching in many off-the-clock hours to bring Gorski’s vision to life including posters, playbills, advertising and headshots in addition to the set pieces.

“I am very much indebted to the work that she does because it helps me make the program the best it can be,” said Gorski.

A Mentor & A Champion for the Arts 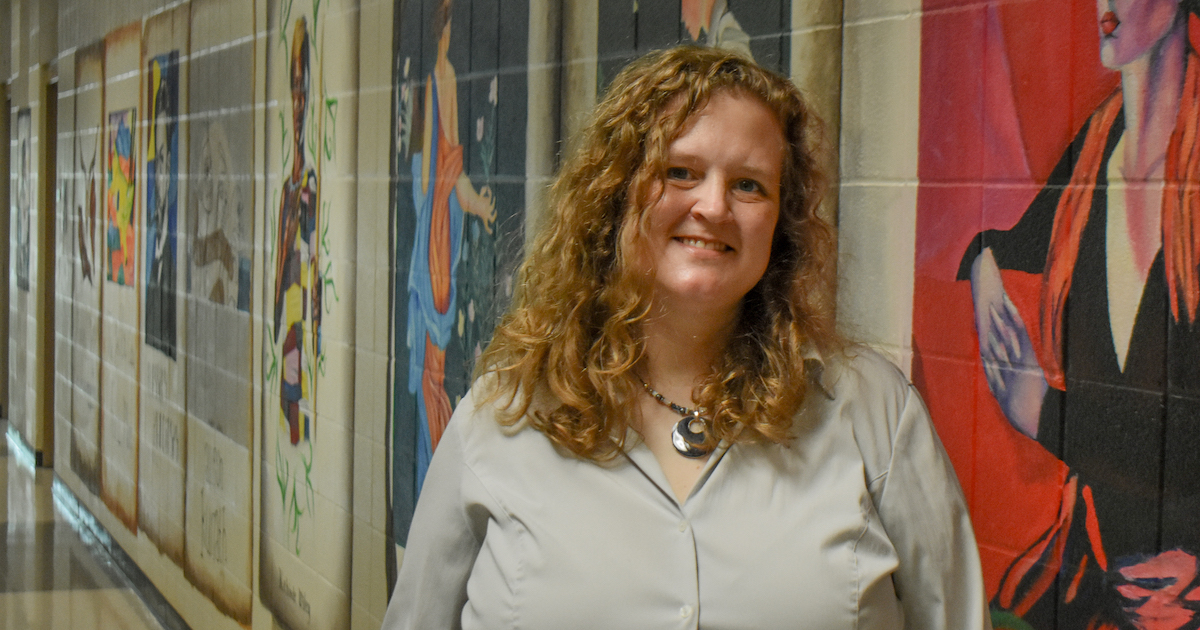 Melissa Poppe stands alongside one of many walls that are adorned with the artwork of students of years past.

Fellow visual arts teacher, Megan Shawkey, previously had Poppe as a teacher in her time as a Green Hope student. Naturally, when Shawkey returned to the halls of Green Hope to teach, Poppe was there to provide professional advice and mentorship.

“She always takes the time to work with me and other beginning teachers beyond the hours that are required,” said Shawkey. “She makes sure that all of us within the department are one cohesive team and that we all know what’s going on, especially now with virtual learning and finding how that can apply to our classrooms.”

According to her colleagues, the dedication Poppe has for arts curriculum goes far beyond the walls of Green Hope High School. Through her active role in the NC Art Education Association as president-elect, Poppe does all she can to spread a very clear message to all — “support the arts.”

Of all the rewards that come with teaching, Poppe says the best of all are the “a-ha” moments.

“I love it when they get it and they are proud of what they do. Sometimes, even when they aren’t in my class, they keep on going and come back to show me what they’re making and learning about and that’s amazing,” said Poppe.

She certainly is one that inspires students as some parents have reached out over the years to express the impact she’s having in their child’s life. One year, while teaching an introductory course in art history, Poppe received a letter saying someone’s daughter liked a lesson so much that she considered going into the art field.

On this, Poppe said, “That is the kind of thing that drives my passion to keep going. I just have way too much fun teaching.”

An Open Conversation on Race & Policing in Cary
Scroll to top