Cary, NC — Kevin Moody is a Cary Firefighter with an infectious smile and a drive to succeed that can only be matched by the love he has for his wife, Sharita Moody and their two sons, Kevin Jr. and Kyler.

Finding His Way to the Fire Service

As a young kid, Kevin Moody’s dog Max would howl every time he heard the sirens of a fire truck passing by. Admittedly, at 5 years old, Moody remembers howling right along with him. In elementary school, his love of firetrucks grew when local firefighters came to school to teach the basics of fire safety. A favorite part for Moody was seeing the fire dog mascot, Sparky.

Little did Moody know at that age that one day he would put on the Sparky suit as a trained firefighter, taking part in the same education trips to schools in his hometown of Lumberton, NC.

“I just thought it was so cool. I knew what joy that experience brought me as a child and I wanted to give someone else that same joy too,” said Moody.

It was after earning a bachelor’s degree from Saint Augustine’s University in Raleigh that Moody went into the fire service. A few years post-graduation while working as a personal trainer, Moody came across an overturned car with a woman at the wheel. He immediately pulled over his truck, helped her to stay still and calm and was amazed by the first responders who came shortly after.

“I walked away from that car accident feeling that I had helped someone and felt great about it,” said Moody.

Shortly after, Moody served in Lumberton from 2010-2016 before making the move to work in Cary.

“I loved being home and giving back to where I came from, but I wanted to venture out and work my way back to the Triangle area,” said Moody.

His Crew: A Second Family 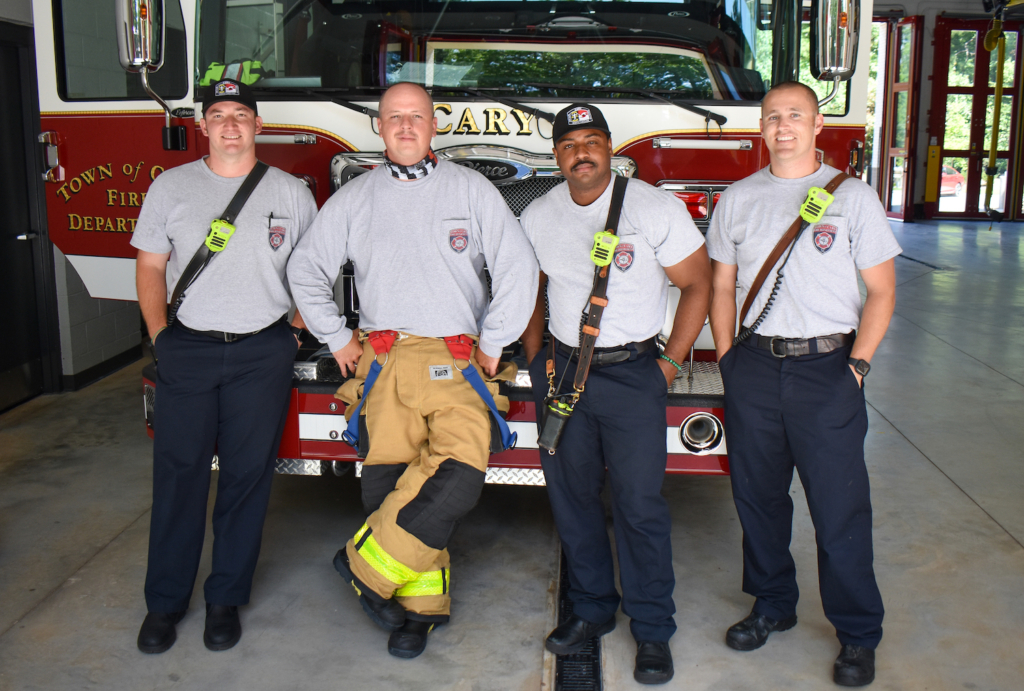 From left, Dan Havens, Travis Hansen, Kevin Moody and Brent Holland stand together in the truck bay of Cary’s Station 9.

Moody’s Station 9 supervisor, Captain Lee Wilson says from day one in Cary, Moody’s greatest assets have been his positive attitude and comedic personality.

“He makes the day go by faster and he makes the work environment more enjoyable for us. That’s the biggest thing about Moody and about the crew as a whole is we enjoy coming to work,” said Wilson.

Station 9 Engineer, Travis Hansen said while Moody is one of the funniest people you could ever meet, he is all-business when responding to a call. On the job, Hansen says he’s okay with someone making a mistake, but there’s a code in the fire service of “pride and ownership”.

“We ask that you have pride for your job, but also have ownership for your actions and you can tell Moody has both of those,” said Hansen.

Moody says from the start of working in Cary, he was blown away by the level of care and service. Of his Station 9 crew in particular, he said, “They all strive for greatness, are highly knowledgable and work together in one heartbeat.”

While his Captain and crew members had all good things to say, Moody is not one to bask in the praise because as he sees it, he’s not the hero, his family is.

“I’ve got a great family and I think a lot of families, particularly of firefighters, sacrifice a lot too. My family are the real heroes. I’m just doing something I love, but they’re the ones that keep me centered,” said Moody.

His wife of 10 years and sons ages 8 and 9 are the pillars that ground him after a tough 24-hour shift. According to Moody, his sons are great at keeping him busy playing outside while his wife is his confidant who makes sure he’s okay.

Challenges of a Tough Job in a Tough Time

During the  COVID-19 pandemic, protocols have grown stricter for Moody and his crew, particularly in the area of wearing masks.

“It makes you a little nervous going on some calls because with this COVID situation there are so many what-ifs. There is so much that’s unknown about the virus so it’s one of those things where you’re on edge,” said Moody.

Outside of COVID, the greatest challenge of the job for Moody, and likely the entire crew, are the bad calls where despite all efforts, there’s a fatality.

“There are some calls where we do all that we can, but the outcome may not change and you have to find a way to balance that out,” said Moody. “What I like to do is after responding to a call where a fatality happens, I think back to a call where someone did make it.”

Hearing Moody talk about these instances, it became clear that a high level of emotional strength and personal motivation is required in addition to all of the training and physical demands.

Responsibilities & Rewards of the Job 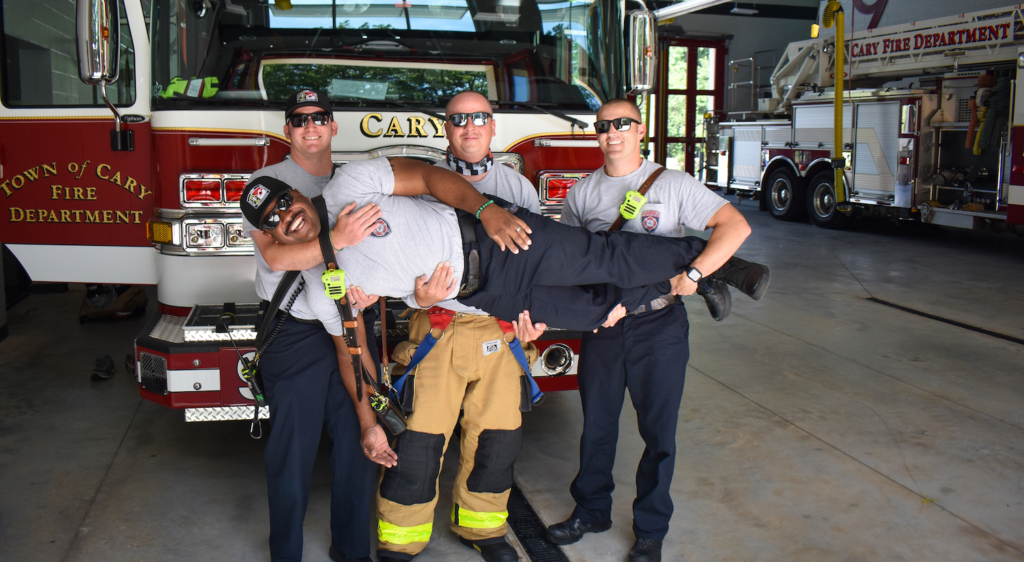 Kevin Moody is hoisted up by his brothers in service, Dan Havens, Travis Hansen and Brent Holland.

“Once it’s your shift, you’re responsible for taking care of the whole town so you want to be mentally ready and on your game,” said Moody.

At the sound of the radio signal, its a matter of seconds before a crew of at least 4, ideally 5, is wheels-out on the truck. Moody’s role as a Firefighter II on the truck is operating the computer, relaying directions and information to his captain and crew. He might be informing them of a downed power line ahead or locating where the nearest fire hydrant is before they arrive.

Whether at the station, in route or caring for a patient, the job is constantly active and intense. For Moody, the quick-on-your-feet nature of the job is a welcomed challenge. There’s even a healthy level of competition between stations and crewmates that keeps all on their toes, especially the person who’s last to the truck.

At the end of the day, Moody feels lucky to work in a career that allows him to give back.

“That might mean saving a family heirloom or photo album or salvaging half of a house,” said Moody. “It’s all about being a benefit to the community and turning someone’s worst day into a better day.”