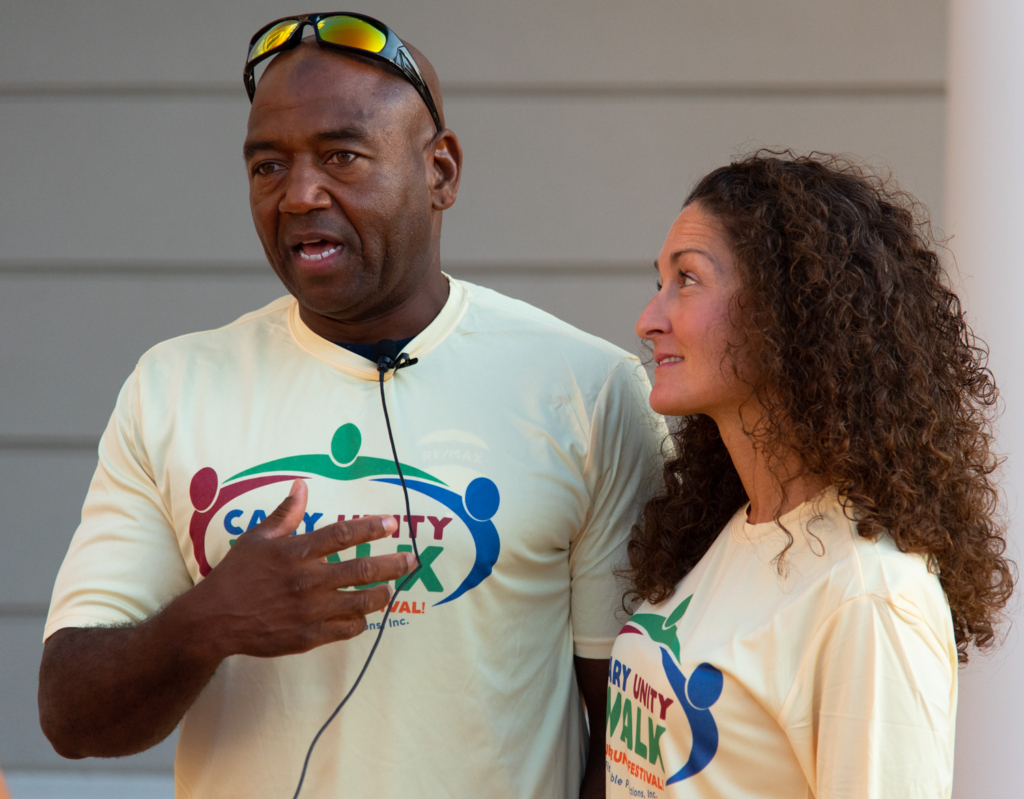 Jimi Clemons with his wife of 12 years, Amy.

I “proudly” wear a badge as a Chaplain for the Cary Police Department, I’ve encountered some bad badges throughout my life, and even more good badges that I love dearly. I’ve been told that I can’t be trusted because I wear a badge, and I’ve been told it’s a miracle to go from a once homeless drug addict to a Police Chaplain with a badge.

I feel a sense of rage inside when I see injustice that goes unpunished, or unnoticed, and feel that same rage when looting and burning is justified and considered a voice for the black community. I’ve been told I’m too black for white people because I’m black, and too white for black people because I draw no lines in the sand when it comes to white people. So don’t tell me I don’t understand. It’s as if Jesus has allowed me to see through so many eyes, to understand so much suffering and confusion.

In this article, I’m not speaking for any race except the human one.

Born with Indifference, Raised with Hate

I’ve often said that I don’t believe that racism exists because I believe it’s a heart issue. If you put two 3-year-old children on the floor and give them toys, they’ll play. Our kids are just fine until they meet us. A child’s heart is created with the gift of indifference, not created to hate what’s different.

My phone has been ringing and pinging nonstop. The one question I get the most is, “How do I talk about this with my friends of other races?” Start with this. If they’re a real friend, and they know your heart, you shouldn’t have to say much. Be the friend they’ve always known and loved. Don’t allow white guilt to pull you out of your character.

White people guilt is insulting and it’s real. To say you’re ashamed to be white is ridiculous.

Our skin color is the beautiful craftsmanship of God the Creator, and He makes no mistakes.

To apologize for slavery, and what your ancestors did makes no sense. God didn’t make Solomon pay for his father David’s mistakes, Solomon was held accountable for his own mistakes.

Thuggish opportunists burned and looted stores, not the black community. The malicious intent of an individual killed George Floyd, not every Police Officer in America.

From here, we have to embrace our own accountability and deal with each other to make the difference, and we can’t be afraid while we’re doing it. Right now our emotions are like trees, they’re all over the place. Fear is going to kill us all if we’re not careful. Emotional reaction and politics must be tucked away to try to scale what seems to be an impossible mountain.

Our Children & Their Generation

That which is known as racism is never going away. You may as well accept it. The Old Testament had it, Jesus dealt with it, and so will we. Trying to fix the overall problem is pointless. Changing the most important piece that God has allowed us to have access to is more than doable, and I’m talking about our children, and their generation. “Next Matters.”

If there’s an obvious problem, teach them the right solution, not to argue about and ignore the problem. Teach them that violence leads to greater violence and even more fear. Teach them that it’s ok for them to go out and experience the world outside of their neighborhoods and that everyone who doesn’t look like them doesn’t want to kill or hurt them.

We shouldn’t teach our kids to be scared of living. None of us can avoid being judged by others, but we can control how much truth we allow it to have.

Somebody told me Obama was the one that was supposed to bring the country together, and Trump is the reason it’s divided. But Jesus said it this way in the book of Romans  12:18 -“As far as it depends on you, live at peace with everyone.”  Presidents do not control our decisions, we do. But it’ll be the truth that will judge our decisions on judgment day.

History Has Repeated Itself

Black lives have to matter if a white Officer kills it, or another black man kills it. One individual black person does not speak for or represent the hearts and thoughts of all black people. Just like one white voice does not represent the hearts and thoughts of all white people. History has repeated itself, and it’ll repeat itself again. How will history judge the lives and choices of our children?  How will our children come out of future history?

It depends on whether you teach them to drink the truth, or water it down.

In the Name of Jesus, this too shall pass.

Harold’s Blog: Cary Responds to the Death of George Floyd

Everyday Heroes: A Nurse and Advocate for Others
Scroll to top