Cary, NC — This week was a slow week. We continue in a State of Emergency due to COVID-19 which means that all my ceremonial events are canceled.

Monday I had my weekly one-on-one meeting with the town manager. We were joined by the Chief Strategy Officer. We mostly exchanged thoughts on the upcoming budget which will have a shortfall in the millions.

Adding to the complexity of this year’s budget is the fact that reevaluation is occurring, and projects funded by last year’s bond are planned. Any of these could have a significant impact on the tax rate.

Projections for future loss in revenue show that it will take a long time, perhaps years, to get back to the pre-crisis level.

As a result, preliminary information shows that going to a revenue-neutral tax rate would likely require lowering our levels of service, possible staff reduction, or both. I highly doubt our council would be interested in that sort of tax rate. Having said that, I am sure a tax increase is off the table as well. 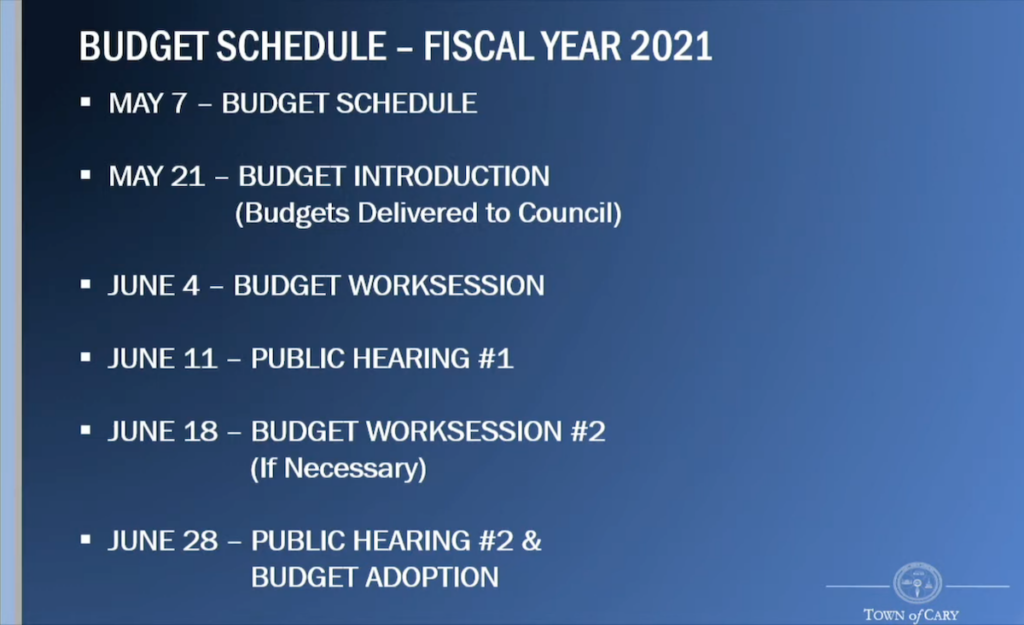 The FY 2021 Budget Schedule was announced during the May 7, 2020 virtual Town Council Meeting.

My primary interest will be to maintain and improve our levels of service while keeping the tax rate as low as possible. I believe the tax rate we set will remain the lowest tax rate in Wake County.

By the way, we have had the lowest tax rate almost the entire time I have been serving as mayor. However, most Cary citizens think we have one of the highest tax rates in Wake County.

Monday evening I participated in a meeting of the Wake County Mayors Association. The mayors discussed whether municipalities should have a role in tracking and tracing COVID-19 cases and agreed that this was a county role.

The revenue-neutral tax rate was also discussed with almost all mayors saying they will likely not do revenue-neutral. Most mayors have already decided to cancel their 4th of July celebrations.

Thursday – NC On Track for Phase 2

Thursday I joined the Governors Press Briefing on COVID-19. He and Dr. Cohen presented data that showed we were on course to move to Phase 2 of the reopening on May 22nd.

Update on Governor and reopening of NC

Building a Coalition for NC for Congressional ACTION

Question: Is there a deadline we need to be aware of?

The expenditure deadline for the current CARES Act money is the end of the year.  In terms of timing for additional funding, it would be ideal to see progress made by the end of May – going much beyond that and chances for federal aid get dimmer – upcoming elections and public urgency may diminish if it drags on.

The goal is to make it the norm in the city to wear a mask.

The meeting concluded after about 40 minutes. 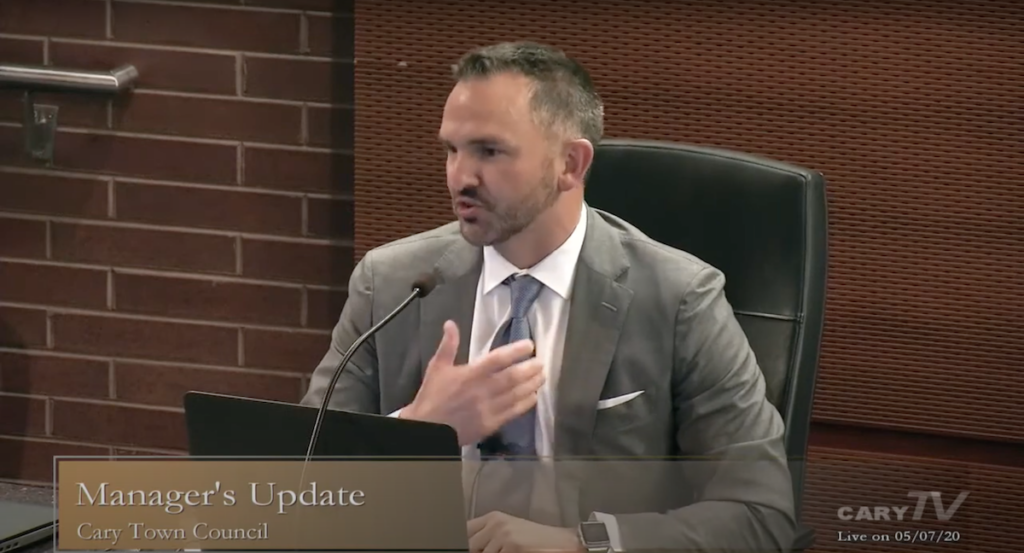 Representatives from Emergency Operations Center (EOC) and Operational Framework Team (OFT) continue to amaze me with their adaptive thinking in developing a Welcoming Employees and Citizens Back to Town Facilities plan that focuses on safety for our employees and citizens. Cary will continue to distinguish ourselves by focusing on our values. Keeping our employees and citizens healthy is key, and we will only move forward with reopening when it is safe to do so.

The first step in the plan is to bring the department directors together on Monday, May 18, to learn specifics about the plan from the Public Safety Director Allan Cain. Then department directors will embark on step 1 of the plan, which is a risk assessment of their department’s physical spaces. During step 1, our citizens will continue to engage with Town staff digitally. Town Hall and all other staffed facilities, except for the Citizen’s Convenience Center, will remain closed to the public through May 31.

Our department directors have lots of complex decisions to make in the coming weeks, but I am certain they are up for the challenge.

Thank you for your continued support,

Deputy Town Manager Russ Overton’s weekly operational message featured information from my first virtual All Hands and a reminder that open enrollment began this week. During the All Hands, I answered pre-submitted and live questions that ranged from preparing the workplace for reopening to my thoughts on leadership styles during a pandemic. Staff found tremendous value in the event and I plan to do another one very soon.

The House is scheduled to vote on the HEROES Act on Friday afternoon, where it is very likely to pass on a mainly party-line vote. However, Senate Majority Leader Mitch McConnell (R-KY) and the Trump Administration have expressed objections to taking up another COVID-19 relief package right now, saying there has not been enough time since the $2 trillion CARES Act was enacted on March 27 to determine whether new legislation is needed or necessary.

This very likely means that the GOP-controlled Senate will pass its own version of the COVID-19 relief package in early-mid June that looks substantially different from the HEROES Act, and a compromise version will eventually become law in June.

On May 5, NCDOT suspended most projects currently in the preliminary engineering (PE) phase. Due to COVID-19, NCDOT’s revenue declined significantly, resulting in the agency falling below the statutorily mandated cash floor of $293 million. NCDOT is funded through the Motor Vehicles Tax (i.e. gas tax), Highway Use Tax (i.e. sales tax), and DMV fees.

The drop in revenue from these sources will result in more than $300 million in lost revenue for this fiscal year. An additional shortfall of more than $370 million is projected for FY21. According to state law, once the department falls below the cash floor, the department can no longer enter into new contracts that spend money on transportation projects. For NCDOT to begin reinstating projects, revenue replacements will be needed. The list of projects impacted in or near Cary include:

The Real Reason to Wear a Mask, The Atlantic 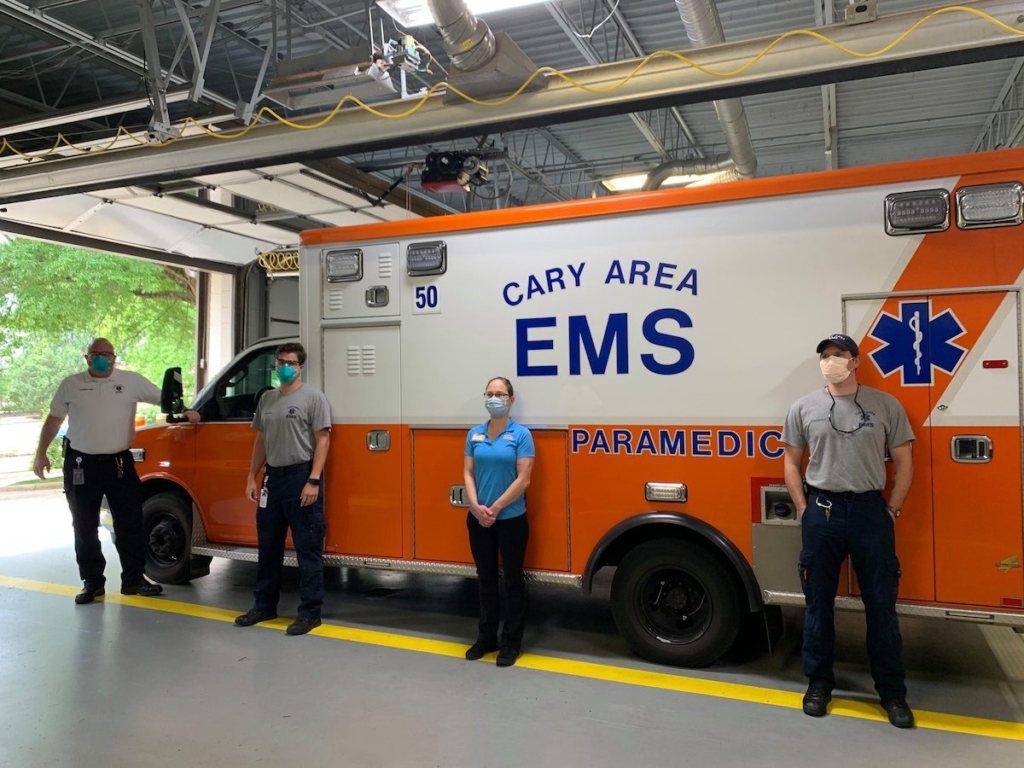 Emails this week included a group of emails about Wake County’s merger of Cary EMS into the county EMS system. Here is the staff’s analysis of that issue:

Below you will find the relevant facts about Cary EMS, their relationship with the Town and the current situation as Wake County considers its FY21 Budget. I have also included my recommendation on the matter, and I am available to respond to any questions you may have.

Cary EMS is a nonprofit organization chartered by the Secretary of State and holds a franchise by the NC Office of EMS (OEMS) to provide emergency medical transport services to/for Wake County.

Cary EMS operates under an annual contract with and is funded by Wake County. Their ambulances function as an integral part of and within the Wake EMS system, exactly like any other Wake EMS ambulance. Operationally, nothing distinguishes them from Wake County EMS. Because they are a separate organization, they have EMS chief officers who also function as their corporate officers. For example, they have an EMS chief, just like Wake County has an EMS chief.

Revenue for Cary EMS is generated by Wake County billing for those services and Wake collects the receipts. Pursuant to their contract, Wake County pays Cary EMS through installments. This arrangement is very lucrative because of the significant number of people in Cary who possess medical insurance. From a health care economic perspective, indigent care is almost nonexistent in our area, so EMS services for our geographic area subsidizes expenses for other areas that have more indigent care.

Over the last 3 decades, Wake County has commissioned several studies to explore efficiencies with its fire and EMS services. One consistent recommendation is to consolidate nonprofits into the Wake County organization for effectiveness and financial efficiencies. For EMS nonprofits, all of them have acceded to Wake County except 2, Cary and EMS and Eastern Wake EMS.

The Town of Cary provides no financial or in-kind support for Cary EMS. Twenty-five years ago, we allocated about $80K annually but that ended about 20 years ago. Two Cary EMS ambulances co-locate in Cary fire stations 5 and 8. We have a contract with Cary EMS, and they pay operating expenses for that space.

The agreement framework we have used for years is they DO NOT lease space, but they do share operating expenses for that space. The philosophy is if we can accommodate their ambulance and crew with available building capacity, we will share the space for which Cary taxpayers have already purchased. We believe there was no need to charge taxpayers again through a lease agreement with a nonprofit organization that is also a Wake County contractor.

Wake County’s consideration to fold Cary EMS into the Wake EMS Department is driven by the need to balance their budget. It is not driven by operational improvement, as there is no anticipated change in service level. The implication now is if that assimilation occurs, it is likely Wake County would not roll-over all of Cary EMS’s administrative staff, like their chief, administrative support, and others.

Cary EMS has had opportunities in the past to roll-over all assets and employees, but they have resisted that effort. Now, Wake’s revenue projections and commensurate expenditure reductions are driving this consideration. In the past, Wake County had been willing to accept all Cary EMS employees, now they cannot and reduce expenses. This is the great pressure and loss Cary EMS is feeling.

From an operational perspective, I see no option where the Town has an interest, standing or opportunity to influence or offset this scenario and I have not heard that anyone else sees an option. If anyone suggests Cary EMS transitioning into the Town as a department or division in the FD, I really do not see how that benefits anyone and it certainly does not benefit the Town.

The timing of any suggestion like that underscores it is simply another effort to resist. That scenario would also require State approval for an EMS franchise for the Town and on its face, I have no reason to believe OEMS would grant that franchise. Moreover, I cannot envision a scenario where Wake County would consent to that, as the OEMS would certainly ask.

Sean held a phone call with Cary EMS yesterday and listened to their concerns. He is following-up with the Wake County manager on the matter. Let me know if you have questions. 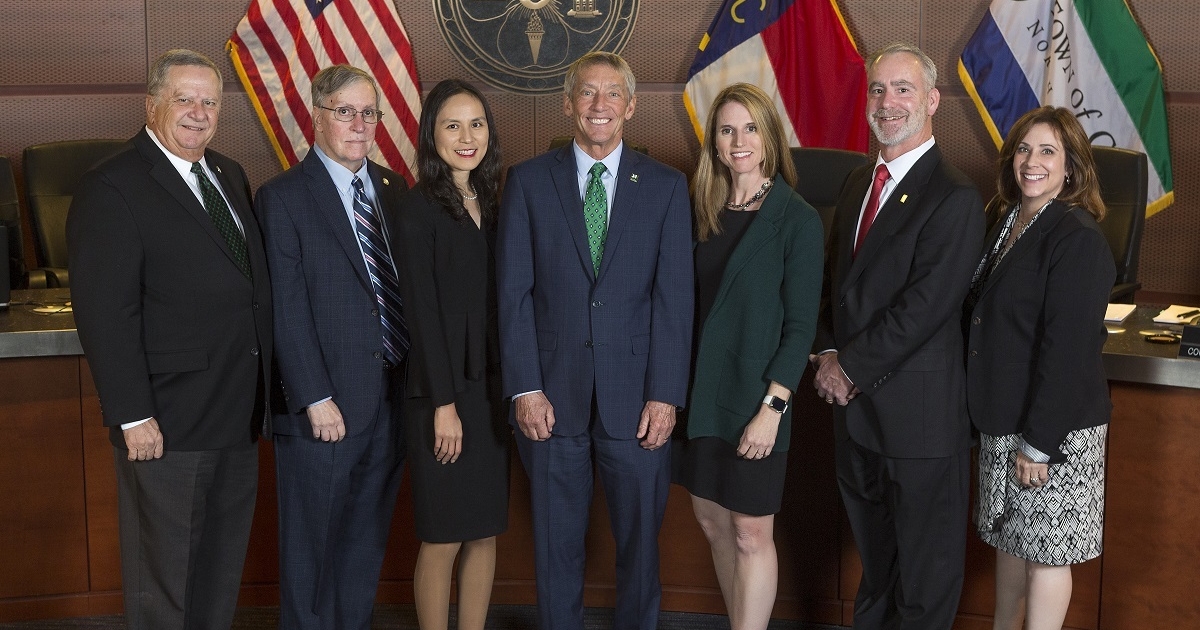 Other emails this week included:

Well, that is all for this week. My next post will be on Sunday, May 24th.  Although I have Facebook and Twitter accounts those are not the best means of communicating with me. Please send all Town of Cary questions or comments to Harold.Weinbrecht@townofcary.org and email personal comments to augustanat@mindspring.com.

From the blog of Cary Mayor Harold Weinbrecht. Featured photo from Cary Area EMS Twitter, construction photo by Hal Goodtree, other photos courtesy of the Town of Cary and the Governor’s public Facebook page.