Cary, NC — Today we are diving into the CaryCitizen Archive to revisit a 2010 in-home interview with one of Cary’s most prominent leaders, Mayor Koka Booth.

We drove up to a neatly trimmed golf course cul-de-sac where every modest house had a American flag hanging from it, in the exact same spot next to the garage. I was early and waiting next to my car with Hal Goodtree, the publisher of the CC. Out of an open garage came Koka Booth waving us in.

We shook hands and he told us with a wink that we needed to get in the house quickly because “Blanche will fuss at me for letting you in the garage”.

I had never seen a garage quite like this. No garden tools, no grease stains, clean as a whistle.  Its walls were covered with mementos of Mr. Booth’s 40-year role as a key “founder” of our town as it is today and our Mayor from 1987-1999.

It was 1971. The town’s population was 7,640. Cary’s park system consisted of a ball park. The concept of Planned Urban Development (PUD) had just been conceived for Cary to accommodate new people moving here for RTP “mostly from IBM” .

Koka (his wife, Blanche calls him “Kokie”) told me, “There was no sewer or water, Kildaire Farm was really a farm on a two lane road. We had two traffic lights. If you needed anything you went to Raleigh…I loved it. But I had seen the town I was from go downhill from lack of progress and I didn’t want that to happen to my new home.”

Mayor Booth went on to tell us that he was a coal miner in Kenova, West Virginia as a young man. He had watched the town go from 120,000 people down to 49,000.  Ultimately he had bought an interest in the coal mines and sold his share at a handsome profit.

One of the reasons he and Blanche decided to come to Cary was the Cary High School Band’s reputation (for their son).  He was told about Cary by a “dear friend”.  After moving here the family soon became active in the Cary High School band and in the Town of Cary itself.  Jimmy Burns – the CHS Band Director – “soon had them performing at the Rose Bowl, the Cotton Bowl, the Peach Bowl and 140 other events”.

With development of Research Triangle Park in the 1960s, Cary began to grow as a bedroom community for the park from a quiet town of a few thousand people. Growth escalated during the 1970s, with the population nearly tripling to 21,763. The population doubled during the 1980s, and doubled again during the 1990s.
– From the TOC web site.

The New Mayor and New Cary 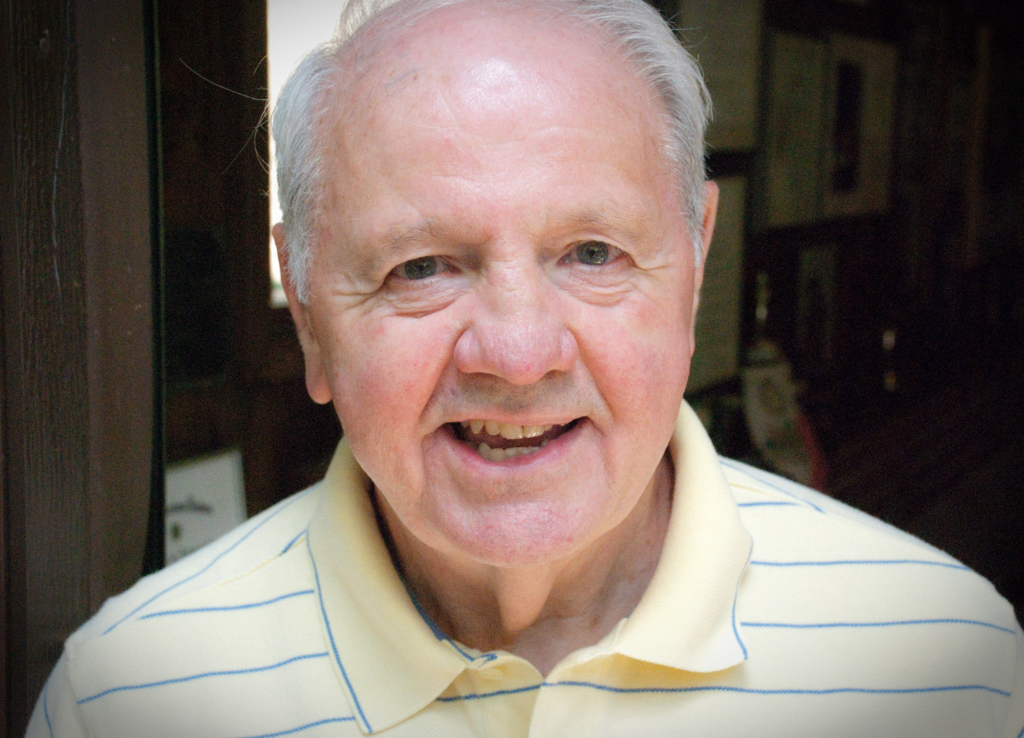 Koka soon was a member of the Town Council and was elected Mayor of Cary in 1987. Research Triangle Park was booming. IBM was hiring. Firetrol came here. American Airlines and Container Graphics came here.  Then Hunter Industries. SAS came to Cary in 1980. The tax base was quickly going from residential to industrial.

He welcomed this growth, taking advantage of it to clean up and develop downtown and adopting a new sign ordinance.  Water treatment facilities were built along with new roads, sidewalks, neighborhoods, parks and recreation facilities.

The Mayor recruited people to work on the new Cary. He told me the story of developer Jeff Sugg. Koka wanted him to join him in Cary politics. Mr. Sugg was resistant. “Koka I’ll do it if you kiss a pig,” he said. Jim Graham, who passed away in 2003, was Agricultural Commissioner at the time. “Well Jim brought in the cutest little pink pig. Kokie kissed it. It was in all the papers. Jeff kept his word,” Blanche said.

“We came up with the concept and consummated the Bond Park idea, for example, in a meeting at a motel.  There was nothing there. Nothing on High House at all. That was a deal that was a great one for us. And it was a bargain.”  Blanche was nodding her head. The Mayor’s eyes were twinkling.

Their house is filled with awards, and pictures with celebrities and other memories of his service to our town. There’s a montage picture of Koka and Tipper Gore laughing. As the photographer snapped the picture Booth made the “bunny ears” gesture behind her head. In the next shot she is doing it to him.  It is signed “I don’t know who started this, Tipper”. “Kokie’s a Republican,” Blanche told us laughing.

These days Mayor Booth is recovering from a stroke he had in August of 2004, when he was 74. Mrs. Booth commented that he keeps busy these days with the yard. “When there is a task to be done, he must always do it ‘right now’,” Blanche told us.

I looked at the player piano in their living room and commented on it. True to form and on cue, Koka ran upstairs and brought down a paper roll and inserted it into the 1903 antique. “THAT is his pride and joy,” Blanche said. “We had hours of fun with that in the old days.” Soon he was furiously pumping the foot pedals as it played some old tune.

Hal and I had to try it. And we did. We were all laughing like old friends. He began reminiscing about N.C. native Kay Kyser concerts in Rocky Mount, his coaching his church’s basketball team, his stint in public relations with SAS, and his love of his wife and his two sons.

I asked him if he had any regrets as we ended our interview.

“I’d like to just pass them by. Know what I mean? We made a difference.” He soon got serious, and began sounding like “The Mayor” again. “Look, please don’t give me credit in your article for anything. I was just here. I loved Cary then and I love it now. I am happy with what our town has become. Any credit goes not to me but to a lot of amazing people that selflessly worked on the vision to make Cary a great place to work and raise a family.”

One of the items on the wall in the garage was an ink & paper sketch of Page Walker with some text. The words are reproduced below.

“Greetings family and friends. This year I decided to do a pen-and-ink of a significant landmark in the history of Cary, North Carolina – the newly restored Page-Walker Hotel which will be dedicated this evening and become the center for visual and performing arts. As I sat across the tracks and sketched this morning a man with a broom and a leaf blower drove up and began diligently tidying porch and walks for the ceremony. It turned out to be our mayor. Does this tell you something about the spirit of our town?  Tonight after the dedication the first art exhibit in the beautiful new gallery will be opened to the public. I hope each of you will have a wonderful holiday with loved ones. Pete Turner”   – Holiday Letter to Friends from Artist Pete Turner 1994 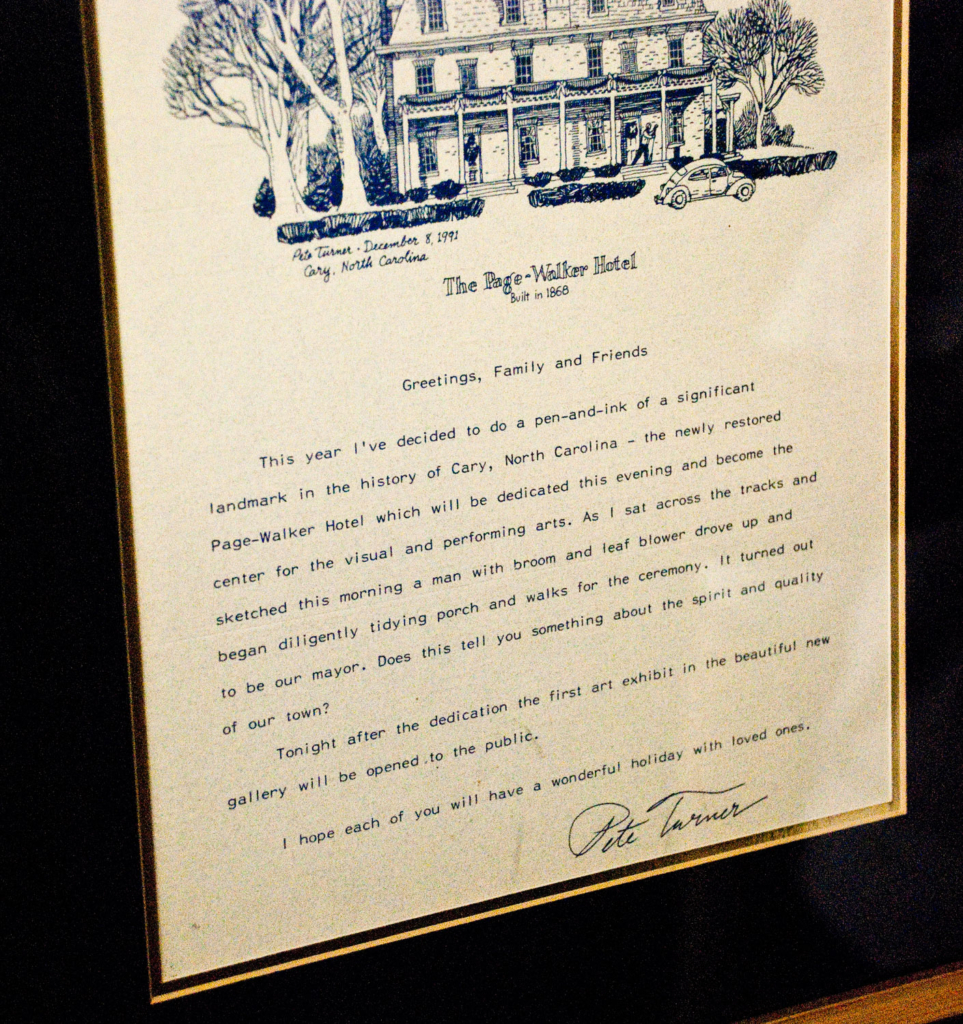 If you look carefully, you can see Koka on the porch with a broom.