Cary, NC — For those of us that are starved for hockey, the Canes are airing a few games from earlier this season.

NHL Commissioner Gary Bettman announced Thursday, March 12 that the regular season would pause due to the rising concerns of the coronavirus pandemic. At the time of this news, there were 189 games remaining in the regular season. Now, instead of the Stanley Cup Playoffs starting the week of April 6, the future of the coveted tournament is in limbo.

As fans wait and hope for the season to resume, the Hurricanes organization is working to keep the fan torch lit. While some games are better left in the past, the Canes are scheduled to re-run some great wins from earlier in the season and they started with the legendary February 22 game in Toronto that put David Ayres on the map. 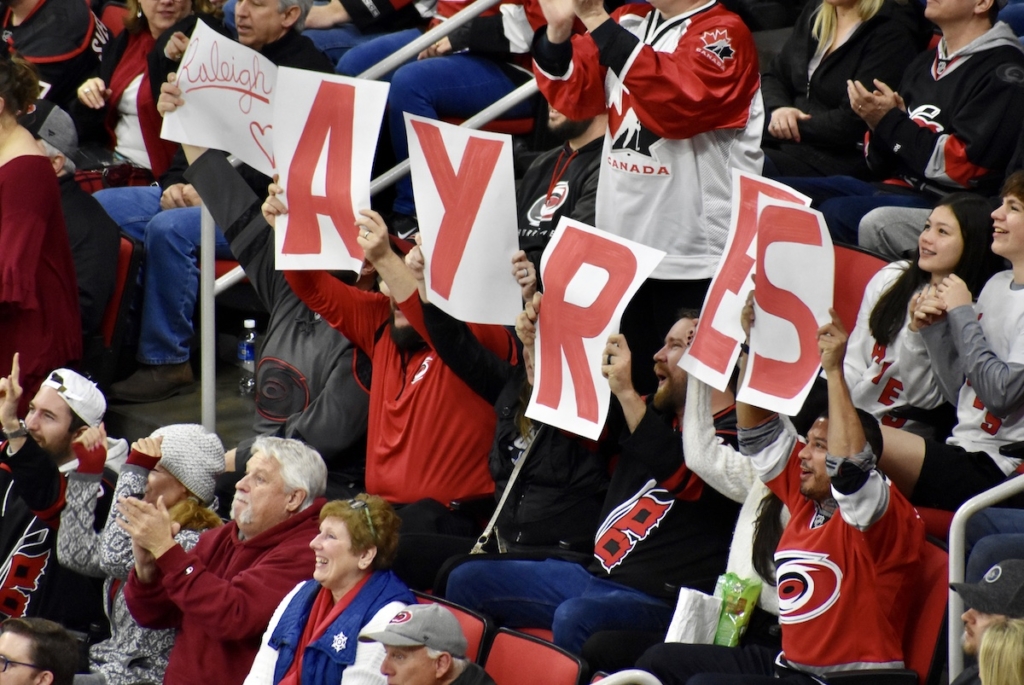 The first re-run game aired Saturday, March 21 and it was the game the entire NHL talked about which was the game both James Reimer and Petr Mrazek got hurt and the emergency back up goalie, commonly referred to as the EBUG, David Ayres, made NHL history, becoming an instant fan favorite by the Caniacs and the entire NHL, players and fans alike.

Critical Points Are on The Line

Both the Canes and the Leafs started the game tied with 72 points and both fighting for their lives for a playoff spot. Toronto had not played in a couple of days, coming off a solid 4-0 win over a surging Pittsburgh Penguin team whereas the Canes lost the night before, again, to the New York Rangers at home then making the late-night flight to Toronto. Despite the well-organized staff the Canes have, crossing the border into Canada takes time meaning the players didn’t get to their hotel until the wee hours of the morning.

The game started fast and neither team let up one bit. What looked like an early goal by the Canes was an outstanding save by Frederik Andersen. It was at the 3:07 mark that Zach Hyman pushed Jaccob Slavin into Reimer with both going down in the net. The Canes muffed the powerplay but during the first TV timeout, Reimer realized his injury wouldn’t allow him to continue so Mrazek enters the game.

Mrazek was challenged early, which was great as it got him into the game. Once again, the Canes gave up a goal in the last minute of play in the period with a Toronto scoring with just 36 seconds left.

Wow, What a Period

Who knew, but the second period would go down as one of the most memorable periods of the season. Lucas Wallmark opened the Canes scoring at the 5:46 mark, wristing in a shot after hard work in front by both Brock McGinn and Jordan Martinook. Four minutes later Nino Niederreiter scored a pretty powerplay goal from the high slot on assists from Martin Necas and former Leaf, Jake Gardiner.

Less than a minute later Jordan Staal carried the puck into the Leafs’ zone passing over to Joel Edmundson. Steady Eddie attempted a pass to Warren Foegele but the pass was intercepted. Foegs, playing in front of family and friends, stole the puck and went right to the net beating Andersen to put the Canes up by 2.

Mrazek knows only one way to play and that’s full out. The puck slowly crossed the Canes blue line with only Kyle Clifford of the Leafs having a shot at the puck. Mrazek then skated 35’ to play the puck just before Clifford, only Clifford couldn’t stop in time. He forearmed Mrazek in the head, resulting in a concussion.

At first, the penalty was called a 5-minute major but while Mrazek was being attended to, the refs, after hearing it from the 19,000 unofficial refs in the stands, reviewed the video and reduced it to a minor 2-minute penalty. Personally, I don’t see a reversal like that ever happening in Raleigh or most non-Canadian arenas. For only the second time in NHL history, an emergency backup goalie is called on to fill in and the life of David Ayres changes in a great way.

The Canes kept the pressure on and less than 3-1⁄2 minutes later added to the lead with the top line on the ice. Sebastian Aho brought the puck into the Leafs zone, passing down to Andrei Svechnikov in the corner. Svech passed up high to Teuvo Teravainen on the left point who sent a cross-ice pass to Seabass camped out on the left post. At first, it appeared Seabass knocked the puck in with all the hacking and whacking going on but video review showed the puck going in off a defender’s skate, crediting Turbo with the Canes 4th goal.

Ayres serves as a part-time practice goalie for the Leafs so he knows all the players and some of their moves. The Leafs were in a big hole and friend or not, they had to get back in the game. John Tavares and Pierre Engvall scored on the first two shots taken on by Ayres. It’s likely neither Reimer nor Mrazek could have stopped either shot. The period ends with the Canes up 4-3 and while the Toronto fans were highly supportive for Ayres, they still were counting on a comeback in the third.

Ayres Shuts Out Leafs in the Third For the Historic Win 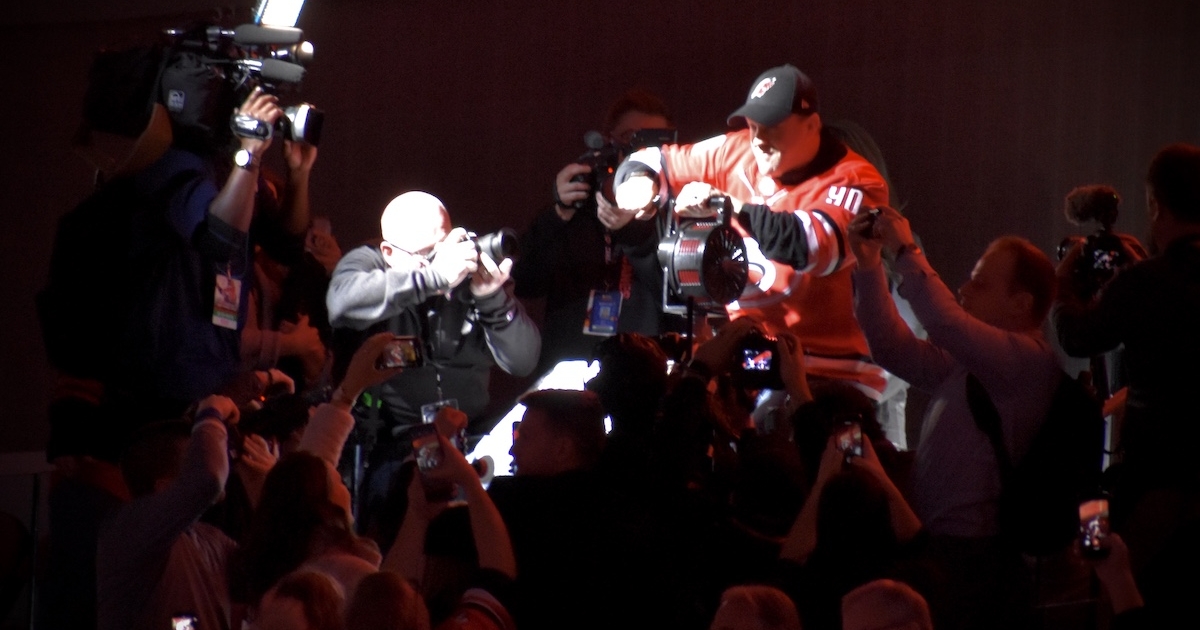 The famous EBUG himself, David Ayres cranked up the Hurricane Warning siren at the February 25 home game with thousands of fans sporting a t-shirt with his name and number.

The Canes won the opening faceoff of the third period and immediately put pressure on Andersen. Foegs gets his second of the game at just the 53-second mark and you could hear Leaf Nation starting to express their displeasure over the home team’s performance. Coach Rod Brind’Amour must have given an emphasis on forechecking as the Canes forechecking game in the third was solid.

Good forechecking leads to turnovers and that’s exactly what happened just under 3 minutes later when Erik Haula made his player lose the puck with Necas picking up the loose change sending a backhander in to make it 6-3. Even with the solid lead and the EBUG in net, the Canes didn’t go into turtle mode but kept the pressure in the Leafs end. The Canes outshot the powerful Toronto offense in every period ending the game with a 47-26 advantage. David Ayres was solid in the third stopping all 7 shots and making the final save on a last-second shot and keeping the game puck.

The next week for David Ayres and his wife, Sarah, was a fun-filled, nonstop whirlwind and he had high praises for both the Canes players, Caniacs, and the entire Canes organization. Fun game to watch, yet again.

Here are 3 more games that will be replayed, with the original game dates shown: