Cary, NC — The Staal brothers of Jordan and Marc, may look at this game as just another of the 60-odd games they’ve played against each other but for Andrei and Evgeny Svechnikov, they both get all jacked up when they have the opportunity to play against their brother who is also their best friend. 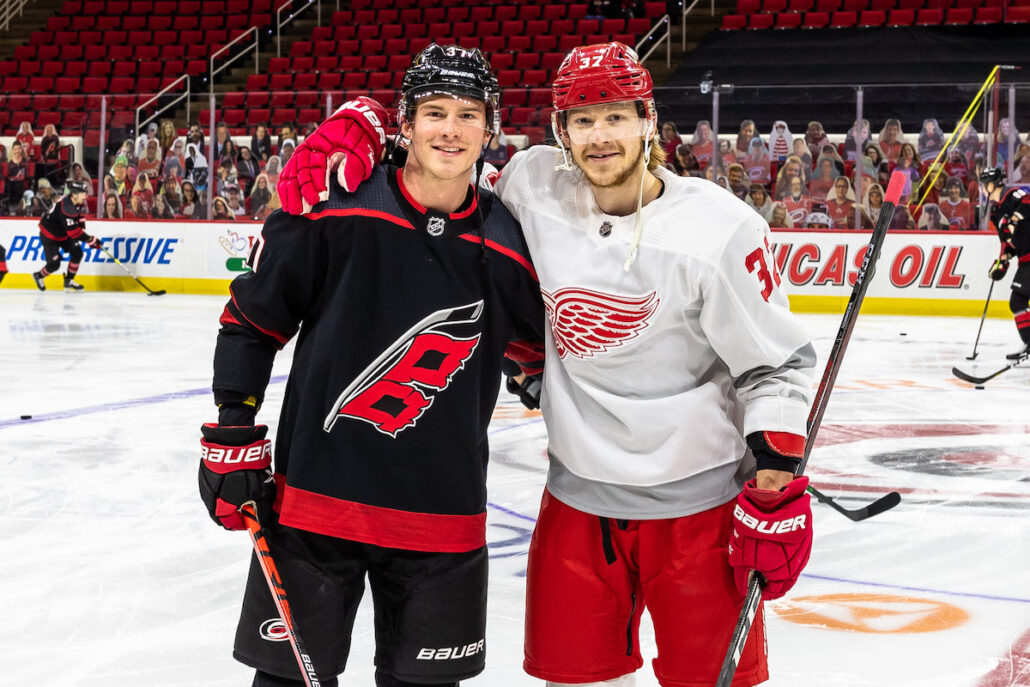 If this was a normal season, Evgeny would be buying the next meal as Andrei and the rest of the Canes beat the Detroit Red Wings 3-1 in front of a Covid sellout of 4,987 loud Caniacs.

After the Canes clinched a playoff spot in an overtime loss, when asked about letting up on the gas, Coach Rod Brind’Amour said there were 8 games left, 16 points, and their intention (with the “their” meaning of everyone in the Canes organization) is to win every game, just like they have all season. So far, the Canes are 2 for 2 with 6 more to go.

The Red Wings have been eliminated from the playoffs for about a week now so one may think the overall first team in the NHL playing a team already eliminated would be a cakewalk. It wasn’t and hasn’t been all season.

The Wings beat the Canes 4 times this season, more than any other team, verifying Roddy’s comments that there are no pushover teams in the NHL. Each team has its share of “stars” and to quote Rod, “the players on other teams get paid a lot of money, are professionals, are competitive and hate to lose as much as we do.”

This is the time of year that injuries take their toll and both teams have some serious talent mending issues. The Canes are still missing Jordan Martinook, Brock McGinn, Jesper Fast, Petr Mrazek and Jake Gardiner while the Wings are without Dylan Larkin, Adam Erne, Christian Djoos, and Frans Nielsen. There are some very key players on that list that any NHL coach would want in their team. 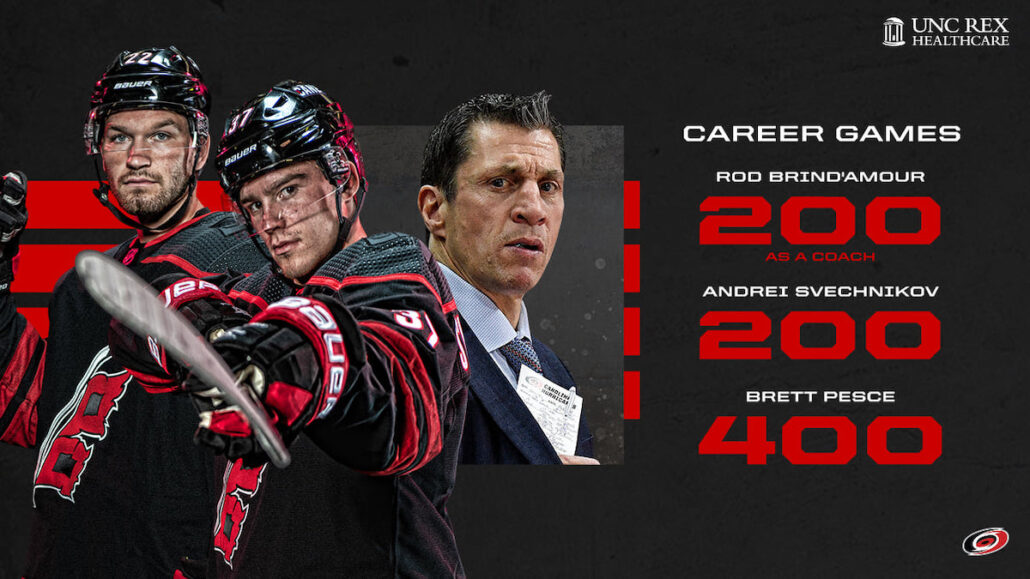 The Red Wings game marked a few special milestones for the head coach and 2 players.

Reimer Keeps The Canes In The Game

Roddy elected to have the fourth line start the game, which knowing Roddy’s style, was probably recognition for their excellent play the last few games.

Steve Lorentz didn’t win the opening faceoff but made up for that by registering the game’s first hit. Right after that, the Svechnikov brothers got into the action with Evgeny getting off the game’s first shot, but it went wide of James Reimer and Andrei snagged the take away to start the Canes first venture into the Wings’ end.

The Canes and Wings are built the same and play a similar style that’s simple to describe — fast.

Forechecking is actually more difficult against a fast team especially if they’re fast and making quick passes. Vincent Trocheck was below the far circle, passed back to Dougie Hamilton, and tried to twist around Marc Staal. When Staal got his stick across Trocheck’s face, it gave the Canes their first powerplay. The Canes first unit kept the puck in the Red Wings zone the entire 2 minutes but could not get a shot to Jonathan Bernier.

Shots were made wide or were blocked with some Wings paying dearly for those blocks. A great-looking powerplay, but nothing to show for it except maybe a bruise or two by a Red Wing. Whether it was the success of the Wings killing off the penalty giving the Wings confidence or the “what else do we have to do to put it in the net” by the Canes, the ice started to tilt for the Wings.

Over the rest of the period, the Wings had 3 grade-A chances which Reim’s great saves kept the Canes in the game and was the best player on the ice in the first.

Skjei and Foegele Get Canes The Lead 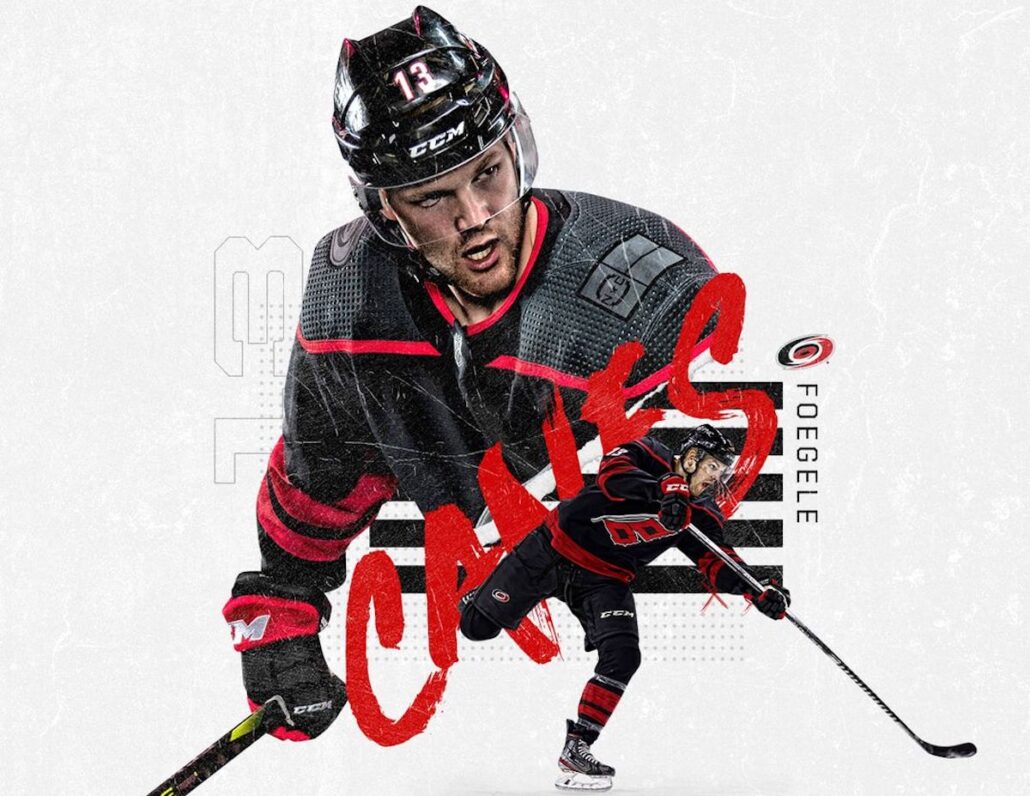 During the first intermission, Rod had to stress to get more shots on net as the Canes only had 6 in the first which is not typical Canes hockey. If that was mentioned, the Canes responded with a game-high 16 in the second including 2 that went past Bernier.

A funny fact about the second period is Lorentz and Luke Glendening took the initial faceoff with Glendening again winning the draw. In both the first and second periods, exactly 11 seconds after losing the faceoff, Lorie registered a hit on Glendening. Those little things don’t go unnoticed by coaches.

Later, Teuvo Teravainen had the puck deep in his end, settled the puck then made an 80’ pass to Sebastian Aho on the Wings’ blue line. Fishy brought the puck into the Wings’ end, faked going low, and stayed up high before threading the puck between the legs of a defender, timing the pass across the ice to Brady Skjei just as he crossed the blue line.

Skjei wound up for a slap shot but realized he had some space. He took 2 strides then, just as a defender made an approach, snap wristed a shot to the far upper corner for the game’s first goal in his first game after sitting out 3 with a slight concussion. Easy for me to say “slight concussion” as all are serious but Turbo was out 33 games with a “severe” concussion.

Nine minutes later, with the puck deep behind Bernier, a Wings defender rimmed the puck up the near boards. With Andrei Svechnikov tying up his man, Brett Pesce made the right gamble, pinched up to get the puck then, with one hand, whipped it down to Foegs just north of the goal line.

Foegs went around one defender and took a shot that Bernier blocked with a chest save but Foegs was the quicker one to the rebound, knocking it home for his 10th of the year and a nice 2-goal lead.

Exactly 4 minutes later Jakub Vrana scored one of the prettiest goals against the Canes this season. Taking advantage of a weak and innocent clear by the Canes defense, Vrana intercepted the puck just inside the blue line, split between 2 defenders down Broadway then turned his stick and body top shelving a backhander that you only normally see even attempted in practice to get Detroit on the board.

In the second period, the Canes picked up their play over what they did in the first by a wide margin, and that continued into the third.

Glendening went 3-for-3 on period starting faceoffs, this time against Jordo. Getting introduced to the boards by Foegs was tough enough so it was a wise move by Glendening to stay clear of the Canes captain at the 11-second mark of the third.

The Wings went with just 11 forwards, meaning 7 defenders and the extra shifts by the forwards seemed to take their toll in the third as the Canes seemed to control the puck for most of the period. By the end of the game, Wings coach Jeff Blashill did a gutsy move and pulled Bernier with over 5-½ minutes remaining. Why not? He had nothing to lose.

This was all set up as they were down at that time 3-1. Just before midway in the period, it was the Canes’ turn to take advantage of a lazy clear. With the Canes’ top line on the ice, Svech surprised a defender with his quickness, touching the puck off the defender’s stick. Fishy was quick to the puck, took one stride going west, made a slick backhand no-look pass to Turbo inside the near circle, settled the puck then quickly sent it 5-hole that Bernier wanted back. 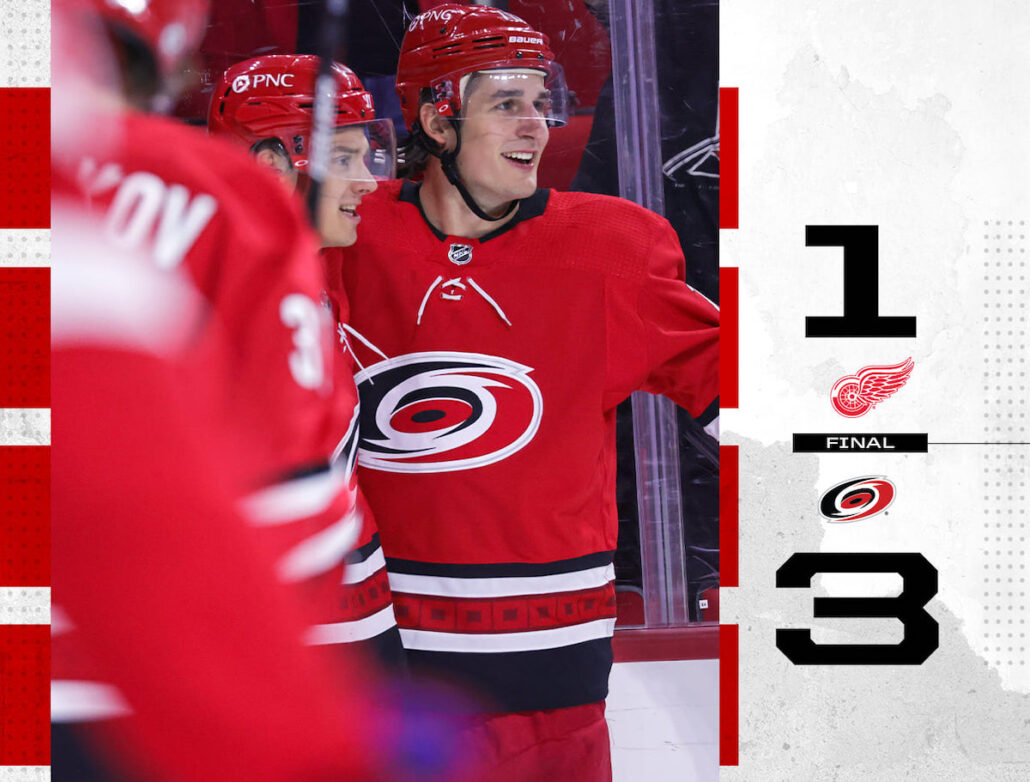 When asked after the game if his first thought was to pass (rather than shoot) Turbo said with a big smile “ALWAYS!” His style is to pass first which can be the wrong option and there were 19 others wearing Canes sweaters that were glad that Turbo chose to shoot this time.

Even with the extra skater for over 5-½ minutes, the Canes played so well on the defensive side of the puck the Wings only had a total of 3 shots in the period. Impressive and something Roddy and defensive coach, Dean Chynoweth certainly would notice and compliment the team on.

Excellent start to the final homestand of the season and another step towards finishing first in the division and a good chance at the President’s Trophy. The next series is against the tough Chicago Blackhawks starting Saturday.

On right, brothers Jordan Staal of the Hurricanes and Marc Staal of the Red Wings battle it out for the puck (and bragging rights, of course).

The Movies by Moonlight Experience at Koka Booth