Cary, NC — For the second time in his NHL career, Brock McGinn had a 4 point night with the Canes starting off the 5-game homestand with a victory. The team came back from a 2-0 deficit with a solid 7-3 victory and 6 unanswered goals.

The Canes had 12 players get points with only the fourth forward line not getting a point. Ginner had 2 goals and 2 assists while Teuvo Teravainen also got 4 points with 1 goal and 3 assists. Turbo did have a goal reversed after Blue Jackets coach, John Tortorella, won a challenge for offsides that (by frame by frame replay) did look like Warren Foegele was offside by 1/4 inch.

It was in the Blue Jackets game earlier this month in Columbus that Torts challenged a goal for offsides and the officials in Toronto later admitted to watching the wrong video to award the Canes a goal. No way did the officiating crew dare make that same mistake, especially with Torts on the requesting end.

Jackets Start Hot in the First 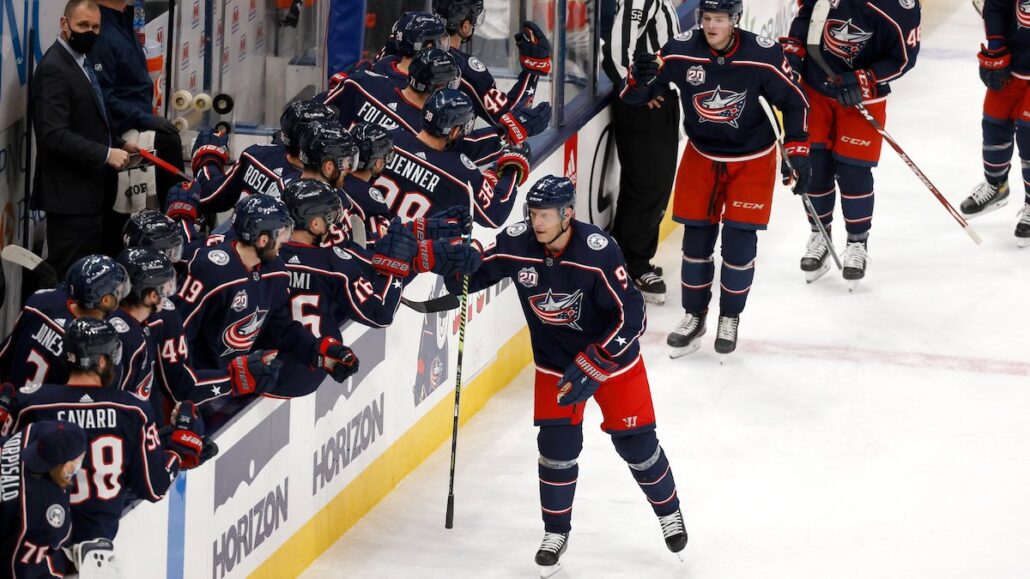 The Blue Jackets wasted no time getting on the board just 26 seconds into the game.

After winning the opening faceoff, the Canes had the puck deep in the Jackets’ end but lost control in the corner. The Jackets defense made a nice pass up to newly acquired Jack Roslovic in the neutral zone, carrying the puck into the far faceoff circle. He did a fancy dipsy doodle move, then a button hook, hitting Patrik Laine for a quick shot.

Canes keeper James Reimer made the initial save but NHL player of the week, Cam Atkinson was unmarked as he charged the net for an easy putback. Just under the 6-minute mark, Nick Foligno used the net to block Jaccob Slavin, went around to the far side and slung the puck to the dirty area of the crease.

With Dougie Hamilton draped all over Boone Jenner, Reims kicked the pass out with Jenner getting the blade of his stick behind Hamilton to push the puck between Reim’s legs that barely made it over the goal line. 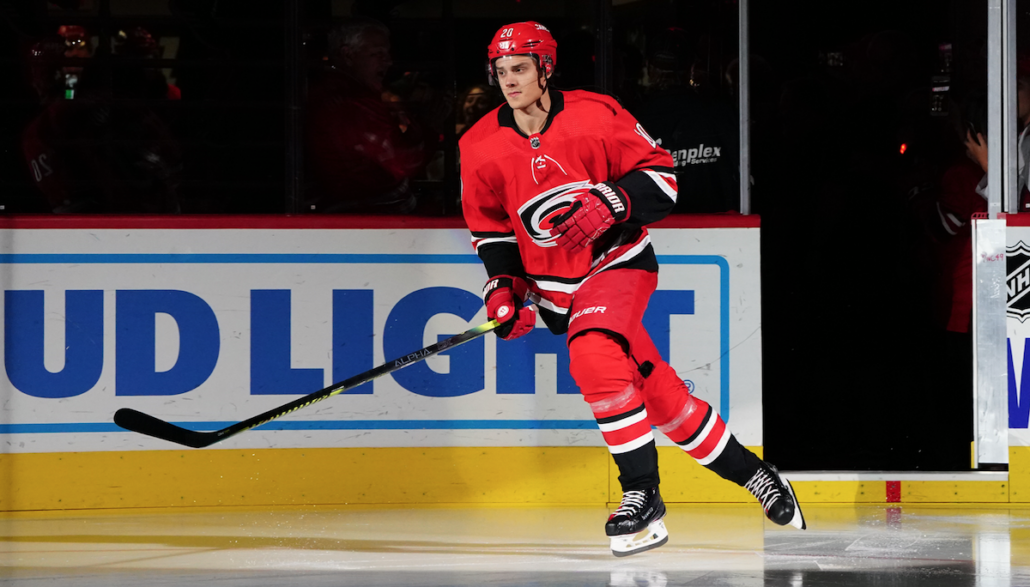 The Canes got on the board 8 minutes later. With the Canes putting pressure on Jackets goalie Joonas Korpisalo, Sebastian Aho picked up a rebound off the side of the net. Seabass skated with the puck along the near boards, passing over to Slavin in the high slot.

Fishy kept his feet moving to elude his defender with Slavo returning the pass. Fishy settled the puck, chose a spot and sent a laser wrister into the far upper corner. The Jackets went up by 2 again only 2-½ minutes later when Reims made a save off a Jenner slap shot from the high point with the blocked puck going 15’ in the air.

Kevin Stenlund was unchecked just inside the far circle and with unbelievable hand-eye coordination, batted the puck like Mickey Mantle out of the air for a line-drive homer. After that, the Canes woke up for good.

With less than a minute and a half in the period, Jake Bean pinched from the right point, knocking the puck to Jordan Staal in the corner, Jordo cycled with Foegs along the back boards then went straight to the net for a return pass. Jordo’s first shot was blocked but swatted at the rebound knocking it in to start the Canes scoring bonanza. 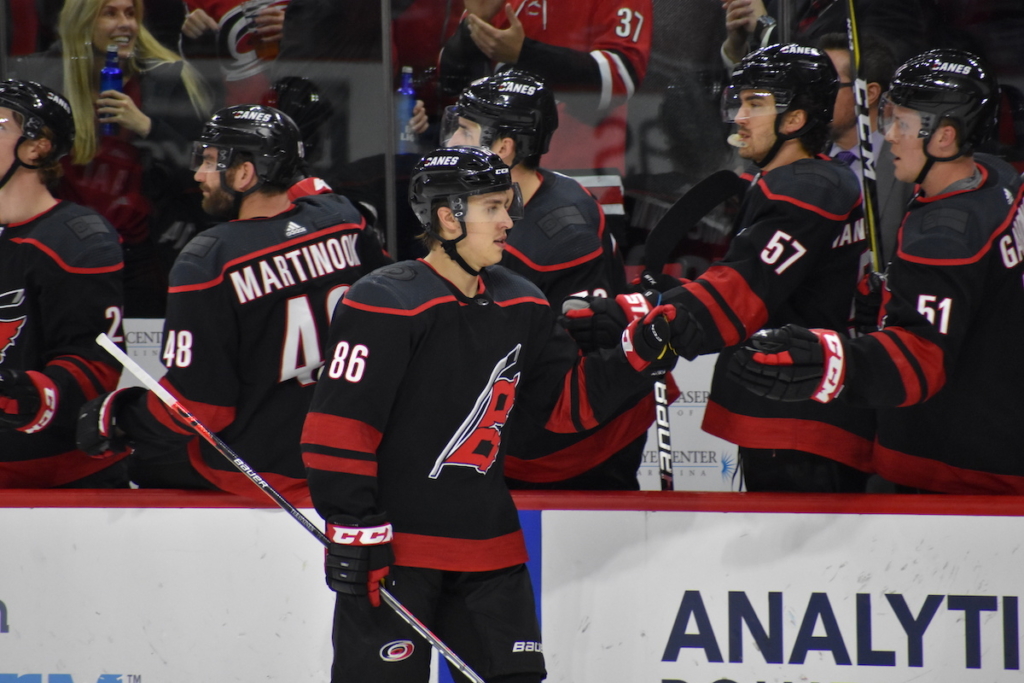 With the Aho line starting the second shift of the period, Seabass had the puck along the near boards and passed up to Turbo above the goal line. Turbo deked left, right then centered a pass just north of the blue crease right onto Ginner’s tape who knocked it in while falling backward.

Fishy won the ensuing faceoff, drawing it back to Jake Gardiner. Gards passed it to Ginner and making the entry, took a shot that Korpisalo kicked out. Thankfully, Turbo was there for a nice put-back that bounced in off the inside of the crossbar.

The Canes completely dominated the period which isn’t reflected on the 13 shots each team recorded but when the Jackets did get a shot off, Reims was on his game. Late in the period, Andrei Svechnikov made a strong move with the puck to the goal.

Dean Kukan made the only decision he could to prevent Svech from doing his magic and put his arm around him for a holding penalty for the Canes’ first powerplay. With virtually the entire first powerplay unit on the ice when the penalty was called, Roddy chose to start the second unit—wise choice.

The Canes had a great umbrella set up and were moving the puck with ease. Gards had the puck on the left point then passed over to Martin Necas on the right. Being unmarked, Necas took a couple of strides to the net, faked a shot then sent a cross-ice pass to Turbo inside the far circle.

Turbo sent a quick one-timer pass to the top of the crease with Nino Niederreiter there to outmuscle his defender to bang it in. In looking at Torts on the Jackets bench, he was more than a little upset. It wasn’t going to be a happy time in the Jackets locker room during the intermission. 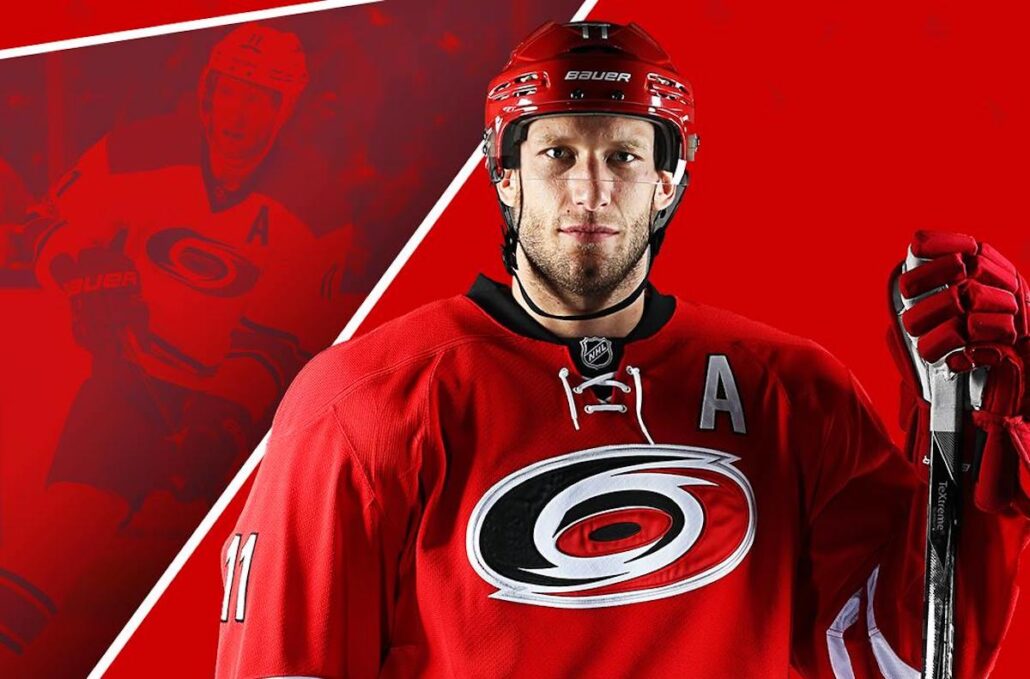 The Jackets did come out for the third period with a little extra effort but the Canes were ready for the challenge.

The Jackets were doing whatever they could to keep the puck in the Canes’ end, throwing as much rubber at Reimer as possible. The Canes defense was a wall, blocking shot after shot with Brett Pesce and Brady Skjei leading the way.

In the 12th minute, the Canes had the puck in the Jackets zone with Turbo and Fishy fighting for possession along the far half boards. Turbo won his battle, sending the puck up to Bean on the right point. Beaner sent a heavy rising shot to the goal that Ginner redirected downward for his second of the game.

Torts had nothing to lose and his film crew signaled to challenge that the Canes were offside. After a lengthy review, it was determined the Canes were onside, this time by 1/4 inch, and the goal would stand. Because of losing the challenge, the Canes went on the powerplay.

With the first unit on the ice, Jordo won the face-off with the Canes keeping the puck in the Jackets zone. The puck was in the far corner up for grabs with Fishy taking control then quickly passed up to Hamilton on the right point. Hamilton slid the puck cross-ice to Svech on the left point, who then took a couple of strides to the net.

Seeing heavy traffic in front, Svech made a perfect pass to Vincent Trocheck’s stick for a redirect from 6’ out that bounced in off Jordo’s leg for the Canes 7th goal to end the scoring. 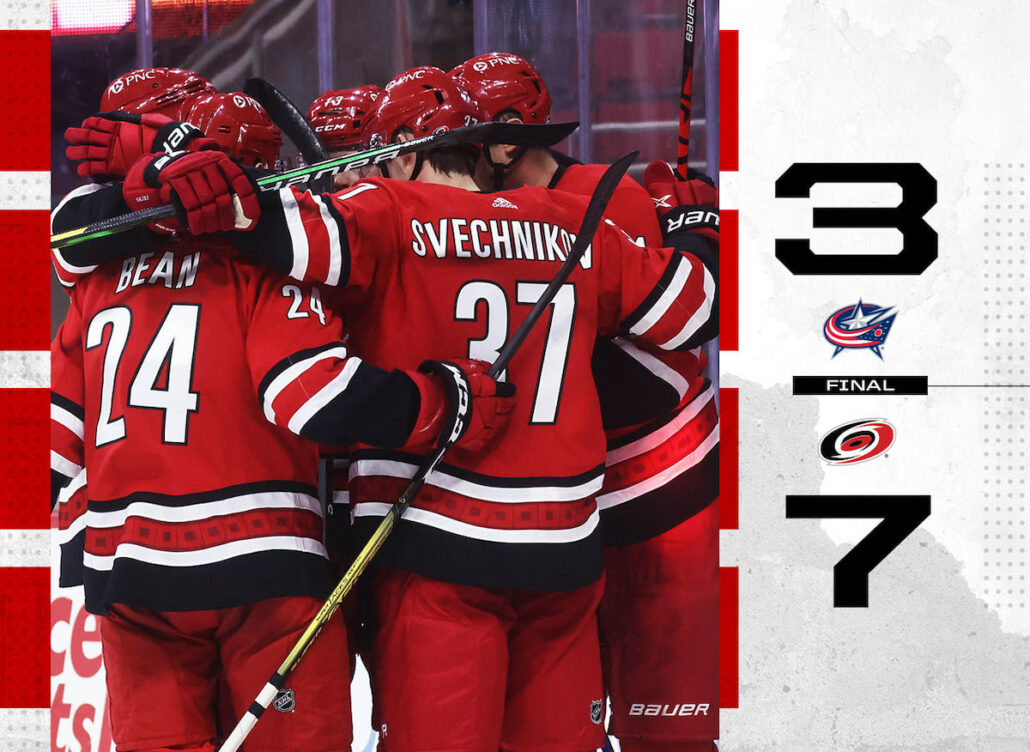 Overall, it was a great team win. The special teams certainly were special, going 2 for 2 on the powerplay and 3 for 3 on the PK. There was balanced scoring, solid defense and while 3 goals against were scored, goaltending was solid.

The next Canes game is Wednesday at 5 PM against the hot Florida Panthers who just beat the Lightning in 2 straight games.

Canes Down Stars in 4-3 Shootout Win