Cary, NC — Have you heard of the Great Backyard Bird Count?

It’s a community science project in ornithology held annually in mid-February and supported by the Cornell Lab of Ornithology and the National Audubon Society.

As we approach the 2021 Great Backyard Bird Count this weekend from February 12-15, 2021, we are reminded by ornithologists that it is important to understand how birds fare and behave even in urban settings.

Finding a Variety of Birds in DT Cary 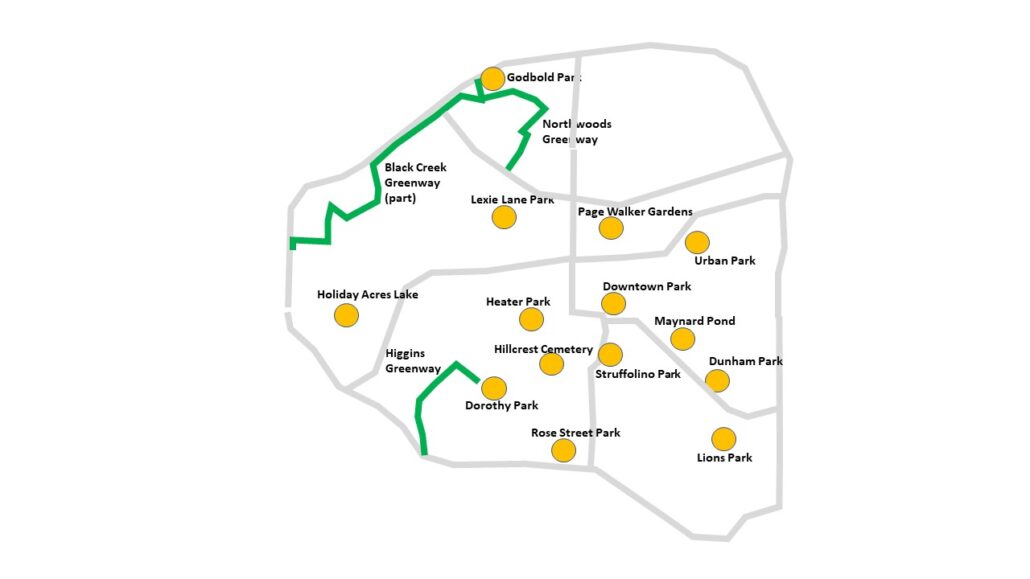 Around here, the urban setting that most comes to mind is Downtown Cary. Cary’s Maynard Loop encloses five square miles and roughly a quarter of the Town of Cary’s population, meaning a population density of 35,000 people per square mile.

At first blush, that doesn’t suggest a particularly good place to find a wide variety of birds, but the Downtown Cary area can be a satisfactory place to do urban birding if you know where to go.

For a “backyard birding” project in 2021, I put that idea to the test.  I ran a bird quest throughout the Downtown Cary area. I visited all ten downtown parks, both greenways and additional locations suitable for bird watching.

I wanted to see how many birds could be easily found in a one-day time frame. In this case, I came up with 42 species of birds within a four-hour search. Here’s an overview of Cary’s Downtown birding places that I hope will inspire you to discover many of the same birds in your own back yards this weekend and beyond. 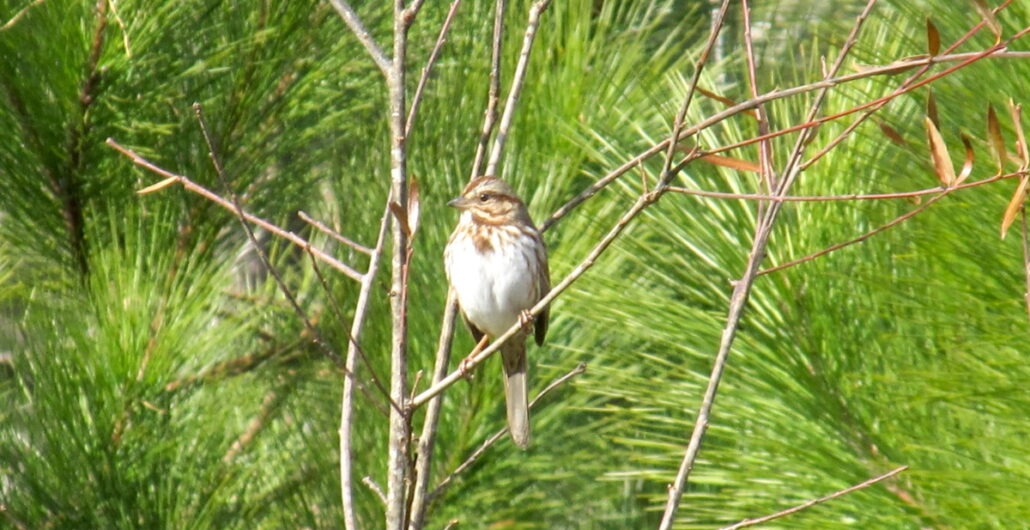 My quest begins at Dorothy Park, a two-acre strip that forms the primary gateway to the Higgins Greenway. Both are built about a creek that incorporates both mature hardwoods and young growth wetland.

In my first 30 minutes, I logged 23 species, most notably Song Sparrows, Eastern Towhees and Common Grackles. Higgins Greenway is well regarded for its impressive bird checklist throughout the year, although significant cover makes birds harder to spot.

A short jog up Griffis Street brings us to the serene glade formed by historic Hillcrest Cemetery.  The grounds are dominated by ancient oak trees and a rich woody edge invites many bird species.  I added my first Pine Warbler, Ruby Crowned Kinglet, Yellow Bellied Sapsucker, and Brown Headed Nuthatch of the day here, and found the north and east edges particularly rich in birdlife.  My 15-minute stop netted 13 species.

Just to the north of the cemetery lies Heater Park, which is a two-acre strip along Dry Avenue.  It is reasonably populated by mature trees and surrounded by homeowners who are enthusiastic bird feeders.  I spotted a Red-Tailed Hawk here and enjoyed a noteworthy number of Northern Cardinals and American Robins.  15 minutes: 11 species. 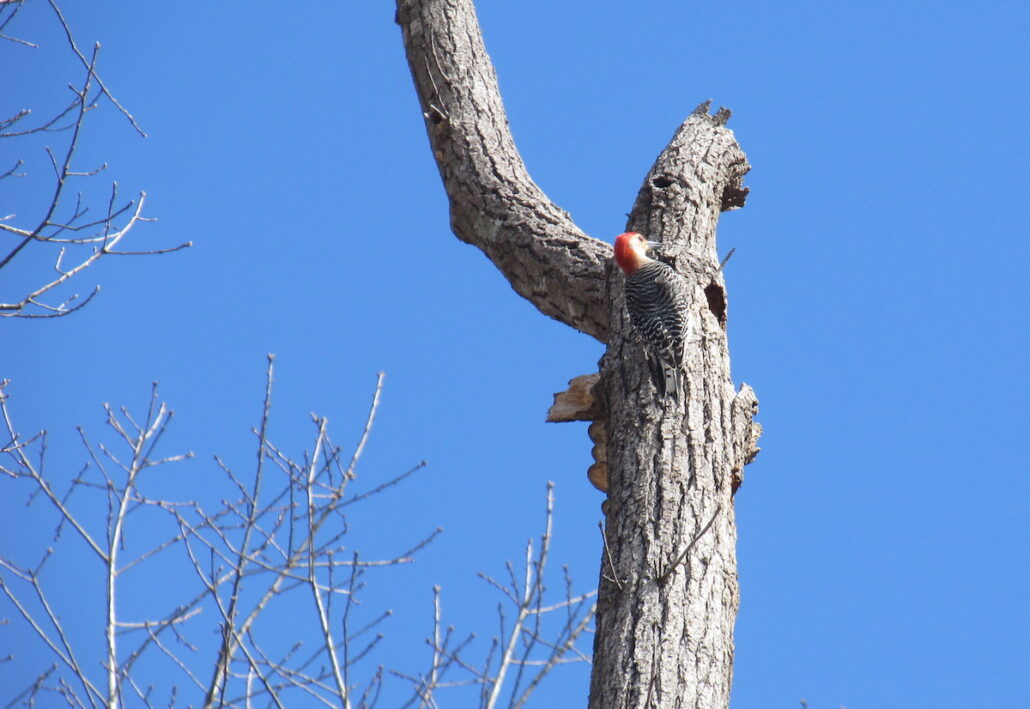 A little farther north, almost to the CSX railroad tracks is Lexie Lane Park.  This park is small but its 1.4 acres offer interest. For the birder, the attractions are the open ball field, pine tree edge against Madison Avenue and open sky.  I readily found Red Bellied Woodpeckers and American Robins as well as Turkey Vultures circling above, as well as four other suburban songbird species.

I could not resist a look at the largest body of water within the Maynard Loop, which is the 7-acre pond centering the Edgehill Farms neighborhood.  Just from the car (please respect the no trespassing signs!) I observed a wonderful collection of water birds—Canada Geese, Mallard Ducks, Ruddy Ducks, Double Crested Cormorants, Hooded Mergansers, Bufflehead Ducks, and a surprising rarity—a Northern Shoveler Duck.  Other songbirds were heard from trees surrounding the pond. While it was a short stop, I observed 11 species. 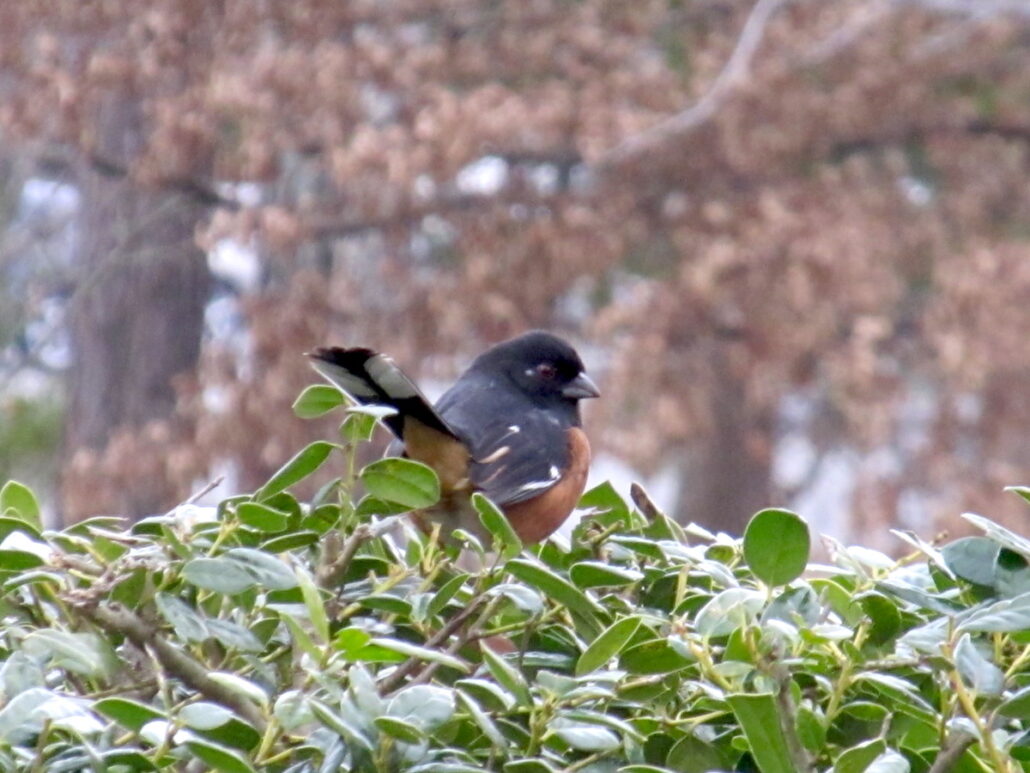 An X mile portion of the Black Creek Greenway system crosses the Downtown Area (from Godbold Park to very near Maynard Crossing Plaza on NW Maynard Road. I focused on a section near Carrousel Road where there are wetlands thick with Beeches.

This part of the trail follows behind some bird-friendly back yards but also includes a surprising number of snags that invite such species as Downy Woodpeckers, Eastern Towhees, Pine Warblers, Red Bellied Woodpeckers, and White Breasted Nuthatches.

Robert Godbold Park is not only a waystation on the Black Creek Greenway but is also the Trailhead for the Northwoods Greenway that reaches 1.8 miles towards Chapel Hill Road.

It wraps behind the park and follows a creek for most of its length.  This was a good place to observe Pine Warblers, Carolina Chickadees and Red Bellied Woodpeckers.  Within 35 minutes I found 13 species. 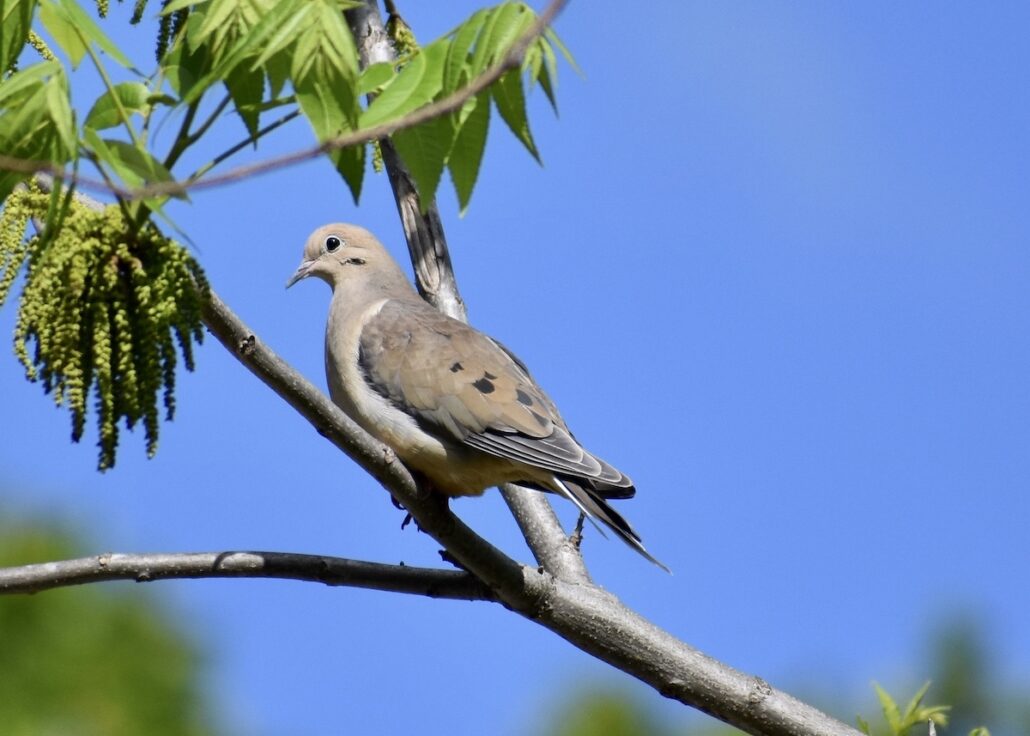 It is always worth a stop at the Page-Walker to see what might be found in the Anne Kratzer Education Gardens and surrounding landscaping.  While my efforts were challenged by some paving construction work the day I visited, I nevertheless identified 9 species in under ten minutes including Northern Mockingbird, Carolina Wren and Downy Woodpecker. Check the area between railroad tracks as Killdeer can often be found there.

Just off East Chatham at West Circle Drive, you’ll find the 1.6 acre Urban Park.  It’s well named for its commercial district ambiance but has its birdlife.  A ten-minute stopover yielded observations of ten species including Carolina Wren, Mourning Dove, Northern Cardinal, and Pine Warbler.  Focus on the shrubbery at either end for the best results.

The developing downtown park site (including the area where the old library stood) offered a respectable view of birds.  Canada Geese are in abundance as well as American Robins, Song Sparrows and European Starlings.

Cary’s first pocket park, just down Kildaire Farm Road from Downtown, is a 1/3 acre jewel and a true Backyard setting, fronted by several homes and Cary Elementary School.  In mere minutes I identified 13 species here including White Throated Sparrows in the shrubbery, Eastern Bluebirds, American Goldfinches and American Robins.  I also found, to my astonishment, a Black and White Warbler.

The second-largest pond in the Downtown Cary area is found at Coronado Village off Warren Avenue.  This 5-acre reservoir was being used by Canada Geese, Mallard Ducks and Hooded Mergansers when I visited.  I found five other songbird species in areas adjacent to the pond in a five minute stop. 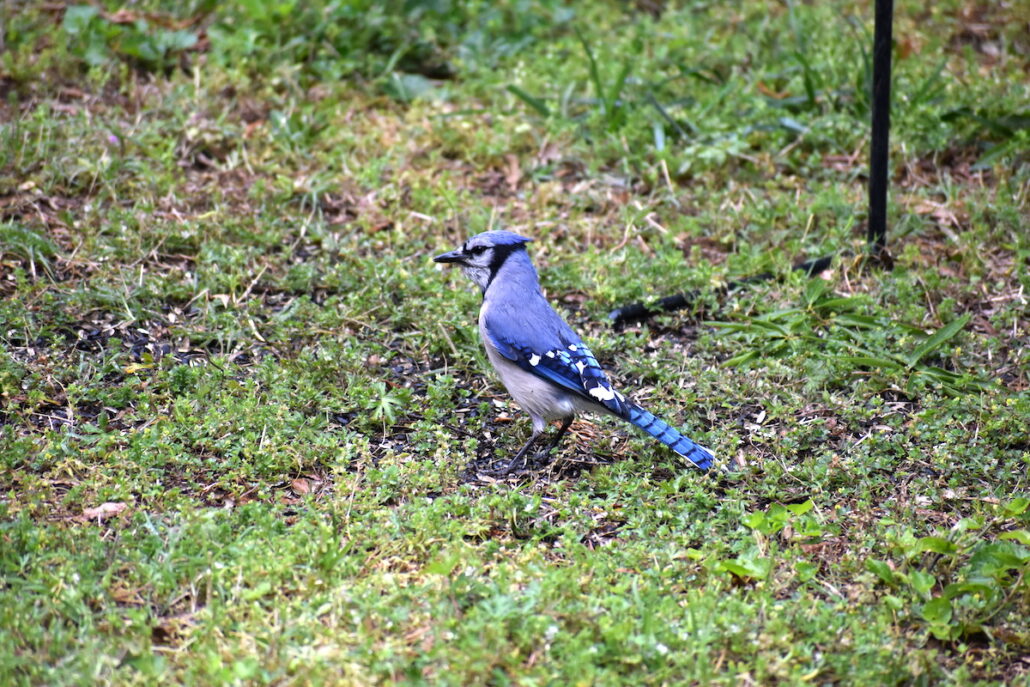 The R.S. “Dad” Dunham park is a six-acre site that encloses a respectable stand of mature Loblolly Pines and it was there that I recorded a dozen bird species, most prominently Blue Jay, Carolina Chickadee, Tufted Titmouse and Pine Warbler.  A large number of American Robins were seen in the open areas of the park.

A hop southeast of Dunham Park brings us to Lions Park which straddles Tanglewood Drive and includes mature pines and hardwoods (many of them Hickories), open areas (ballfields) and backyard edges.  In total that’s seven acres and in my visit, the tree-lovers dominated, among them Eastern Towhee, Red Bellied Woodpecker, and White Breasted Nuthatch.

The bird survey ended at one of Cary’s oldest and smallest parks.  Rose Street occupies 3/5 of an acre and is, unfortunately, adjacent to a significant Glenaire construction site these days.  I found four species to end the day, all of them flying through.

In the end, I observed 42 species in just under four hours of rapid fire work.  More were possible as I’ve logged Cedar Waxwings, Coopers Hawk, Ring Billed Gull, Eastern Phoebe, Killdeer, Black Vulture and Brown Headed Cowbird in Downtown sites in the past year, and can easily imagine the determined birder finding fifty species or more in Downtown Cary in the winter months.

As the Great Backyard Bird Count plays out this weekend, take a look outside in your own back yard, or stop by one of the places I visited this week.  As Downtown Cary demonstrates there are probably more birds than you imagined awaiting!

Story by David Lindquist. Photos by Lindquist and Ashley Kairis.