Cary, NC — The North Carolina Football Club and North Carolina Courage soccer teams have each finished their 2020 seasons, with several road blocks related to the coronavirus along the way.

The Courage finished off the year with a draw of 3-3 against the Orlando Pride, resulting in a 2020 season record of 5W-2L-1D. The men of the NCFC also finished with more wins than losses this year with an overall record of 16W-10L-8D.

Just as the teams have remained active on the field, they have also been acting in the areas of pandemic response and social justices.

An 18-member task force was formed in early October to bring about immediate action to the Club’s Black Lives Matter statement and to “better forum for collaboration on community initiatives for years to come.”

The task force is made up of members of North Carolina FC, NC Courage, NCFC Youth, and team supporter groups. 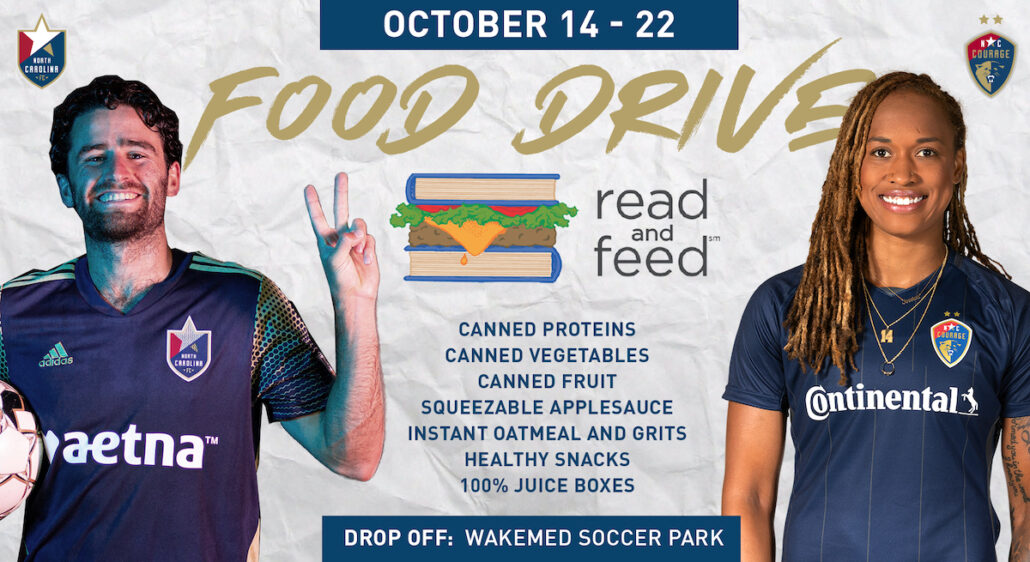 The North Carolina Football Club and NCFC Youth have been co-hosting a food drive since October 14 and it will run until this Thursday, October 22. The drive is all about collecting food items from the community to benefit the local non-profit, Read and Feed.

Collection boxes will are posted at WakeMed Soccer Park and WRAL Soccer Park to collect items for a goal of 400 treat bags which include a canned protein, canned vegetable, noodle cup, healthy snack and 100% juice box.

According to a release from NCFC, Read and Feed is a program that aims to bridge the reading gap by providing children the resources they may not have access to at home including books and food. North Carolina FC players were special guest readers for the program for the month of October.

The main food items Read and Feed is in need of now are:

The WakeMed Soccer Park drop box is located in front of the box office and labeled with a “B”. The remaining drop off times are: