Cary, NC — Many who have biked or walked the Black Creek Greenway have stumbled upon the perplexing works of North Carolina brick sculptor, Brad Spencer.

In his public art series called, “The Arts Alfresco,” Spencer uses brick, a classic industrial building material, to create something that truly defies what people expect of it. 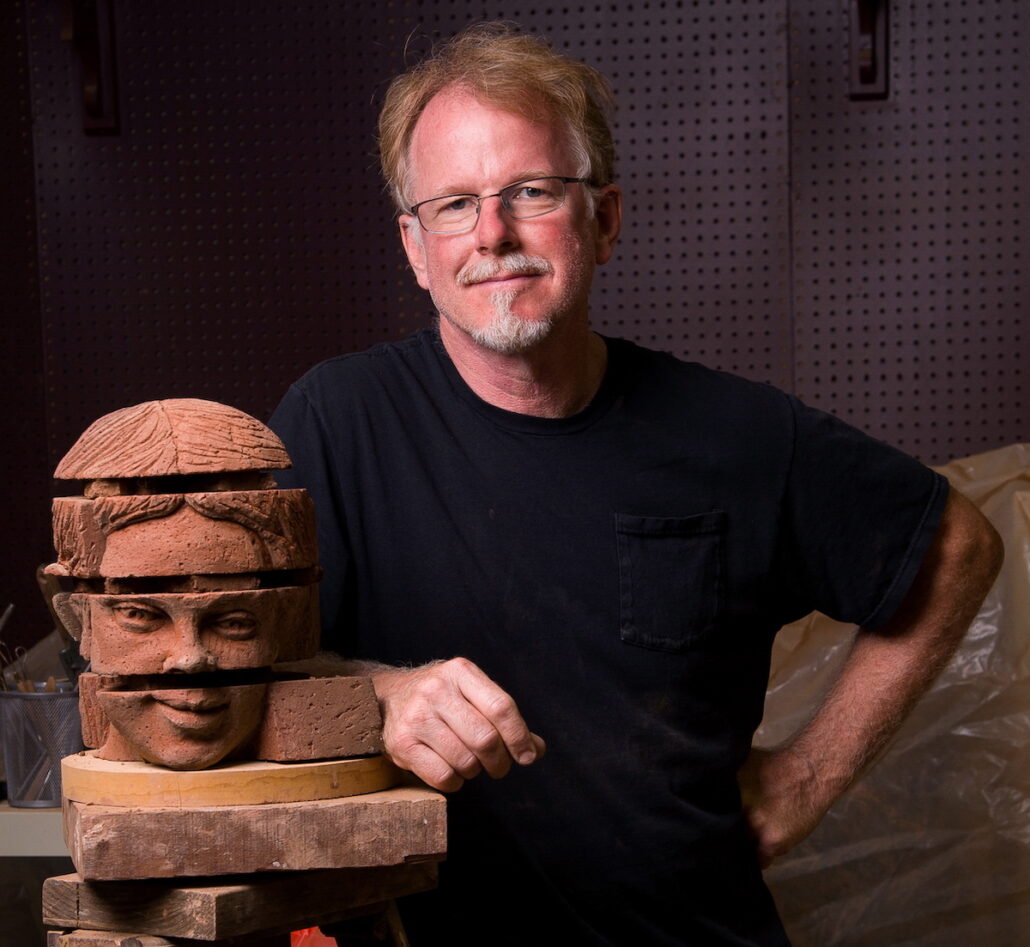 Born in Detroit, Spencer moved to Greensboro with his family as a 5-year-old and was always the kid in school with a knack for drawing, particularly pencil sketches. Knowing he had the artist gene in him, he went on to earn his Bachelor of Fine Arts in painting from UNC-G.

He started the program in 1976 and found out along the way that sculpting was the sweet spot that his passion and talents clicked together most. Graduating in 1983, Spencer taught adjunct for two years before embarking on his own sculpting career.

Spencer achieved success in making small-scale, collectible figurines commercially. He started with the trade show circuit and eventually created his own line of them, sold all over the U.S. and in Europe. Several years into his stride as a figurine sculptor, he said he came to a crossroads of his career.

“What it became was a lot of production and not a lot of creativity,” said Spencer. He was first introduced to working with brick in 1989 and by the late 90s, he had shifted his entire business in the direction of brick sculptures.

Along for the ride has been his wife of 37 years, Tammy. The two of them are each other’s yin and yang when it comes to this work. He primarily does the creating and artistry while she has a background in physics, lends a hand in the studio, and on-site with installations while managing the contracts and finances behind it all.

From Idea to Installation

The facial details and shape of the violinist are shown in the studio while the far right image shows the sculpture today with a face mask added on during the COVID-19 pandemic.

The final product comes into existence after a long process of brainstorming, designing, working with town ordinances, making small-scale models out of coarse clay, and eventually using that to inspire the larger scale finished piece.

“When I’m working on them, I like to get in on the faces pretty quickly because when you do, when it starts to get a face, it takes on its own personality,” said Spencer. “It kind of tells you what to do then.” 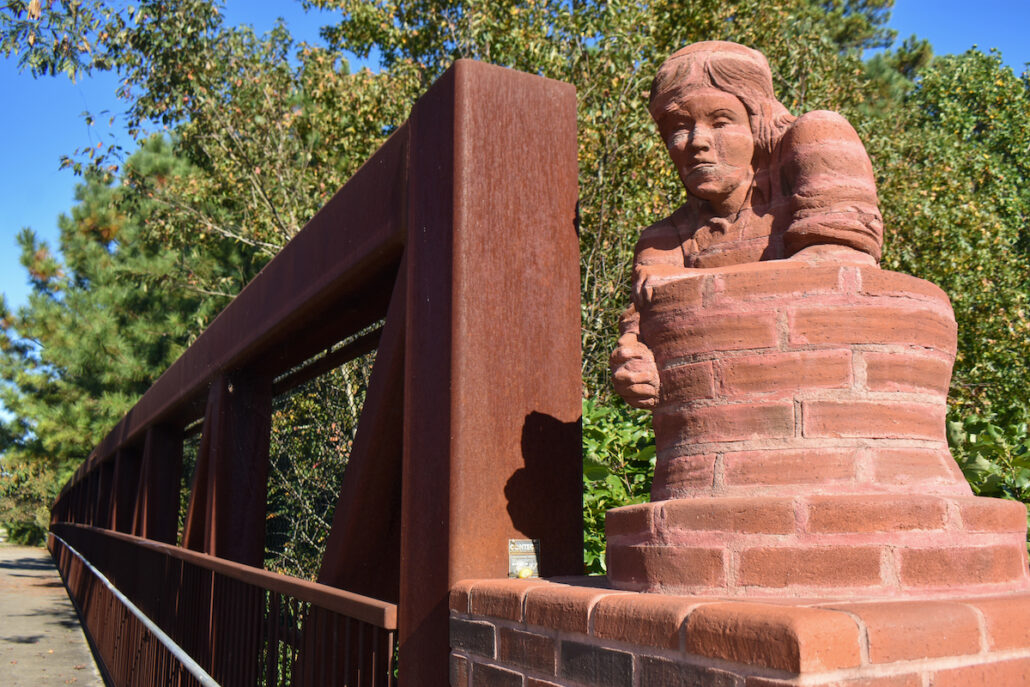 To create his works, Spencer works in his Reidsville studio to carve unfired clay bricks before firing them in a kiln at around 2000 degrees Fahrenheit. After this, he reassembles them with mortar just as any other brick structure, a technique that traces back to the Babylonians. 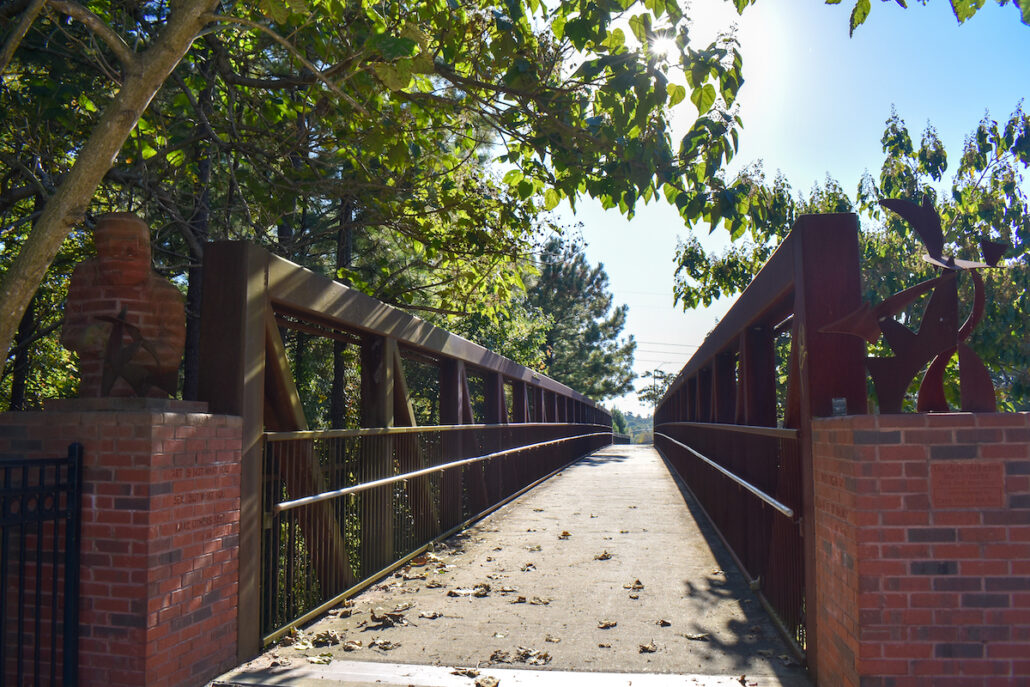 The Arts Alfresco project originally started with a request from Cary Visual Art for qualifications from artists. From that process, Spencer was chosen and it began with three sites for the art installations— the bench at the intersection of Chapel Hill Road and NW Maynard along with the entrance pillars to a nearby bridge and sculpted wing walls at an underpass.

After these three segments were funded, created, and installed around 2013 and 2014, the project was extended to another location and funded by the Town of Cary as more sections of the greenway opened over the last few years.

“Every few years when a new section opens, they contact me and say what they have in the budget for another project,” said Spencer. The greenway may be home to more of his brick sculptures as more sections open in the future. 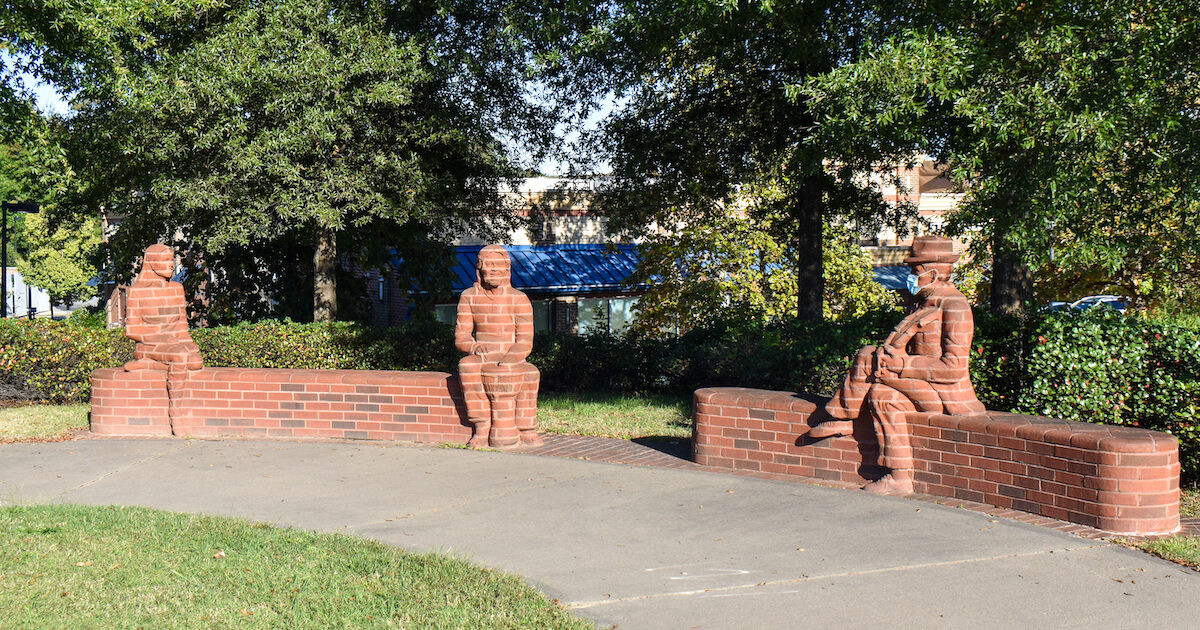 At one of the series’ five sites, there are two benches with three different people sitting near one another. One is a female writer, jotting down her latest work. The other two are male musicians, a drummer and a violinist.

The theme of his series is simple — people making art outside. In fact, “alfresco” is an Italian word that translates to “in the open air”

“That’s what that piece is about. It should feel like their gathering wasn’t planned, but these people all fell together and started doing what they do,” said Spencer.

The five total sites include:

Check out the location map of the artworks is on the Town of Cary website.

A Look Into the Inspiration 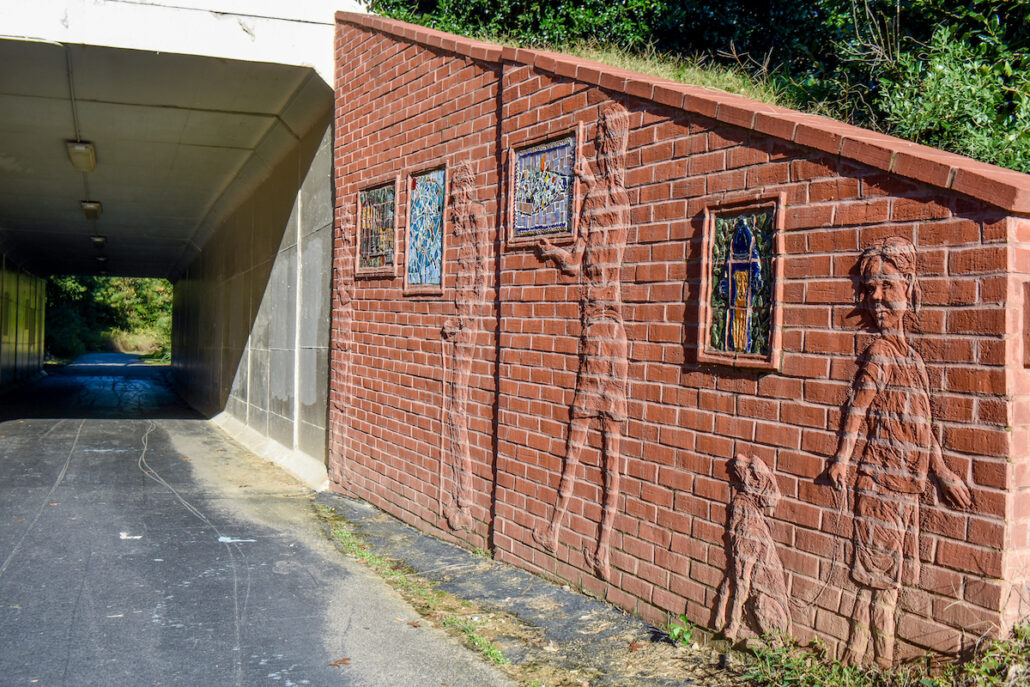 As the locations and uses became clearer in the design process, Spencer began visualizing what best fit each location. It was not about simply creating something nice to look at, but something that is unique, functional and has ties into Cary.

“The sites called for some very different approaches,” said Spencer.

Thinking of the underpass wing walls specifically, Spencer remembers the brainstorming process. Several of his other artworks within the project are entirely three-dimensional and for these walls, his work had to be fairly two-dimensional so as to not protrude much into the pathway.

At the time, there was a mosaic class being held at the Cary Arts Center and he wanted to get the students involved somehow. After getting the prompt of a mosaic about Cary, the class produced several creations that were installed alongside his brickwork at the underpass. 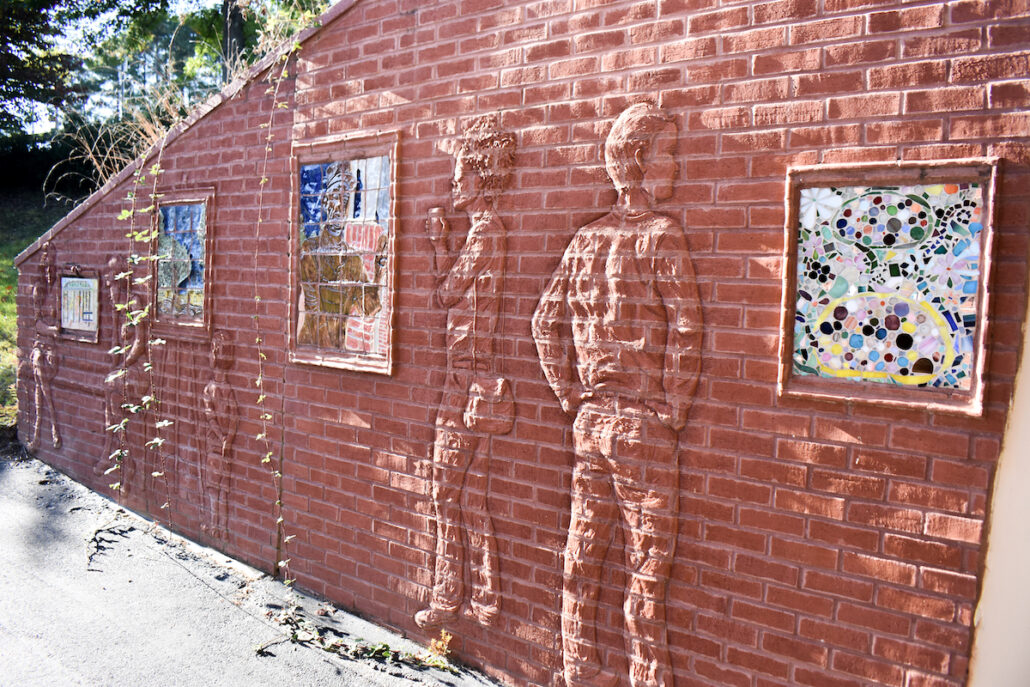 Through this collaboration, the wing walls celebrated both mediums of brick and tile while adding in a pop of color, too.

His sculptures create a small depth of dimension, just enough to show the details of the people viewing and holding different frames. Within the frames are the mosaic works from the Cary Arts Center students.

“That’s the great thing about public art. The more participation and involvement you have from the community, the more it becomes really a part of the fabric of that community.”

The wing walls as a whole concept are intended to look like an outdoor art fair.

The Power of Public Art

After 31 years of brick sculpting, Spencer said, “One thing that I appreciate is Cary understands the value of public art and what it does for and says about a community.”

With nearly 100% of all his artistic time and energy now put into making art for public spaces, Spencer says one of the best things about it as a whole is the power that it wields. As he describes, people are always on a mission. Even while exercising and being outdoors, people tend to think up their to-do lists and dwell on work.

“What public art can do is disrupt that and make you stop and go, ‘oh, what’s this?'” said Spencer. “Everyone lives in some kind of routine that can get repetitious and mundane. Public art makes you rethink things, even if it’s just for a moment, and upsets the concept of your perception.”

For The Arts Alfresco, that’s his main hope, that it does that for the people of Cary.

Annual Snow Rodeo is Underway in Cary
Scroll to top