Cary, NC — If you’ve walked the downtown area that lines Academy Street, you have likely seen, or even sat on, the incredible artwork of Seattle-based artist, Jack Mackie.

Mackie’s collection called “Academy Street Melody” is comprised of 12 granite benches that have spruced up Academy Street since 2016. His public art is showcased all across the world in places such as the United Kingdom, Whales, Spain and here in Cary, too. 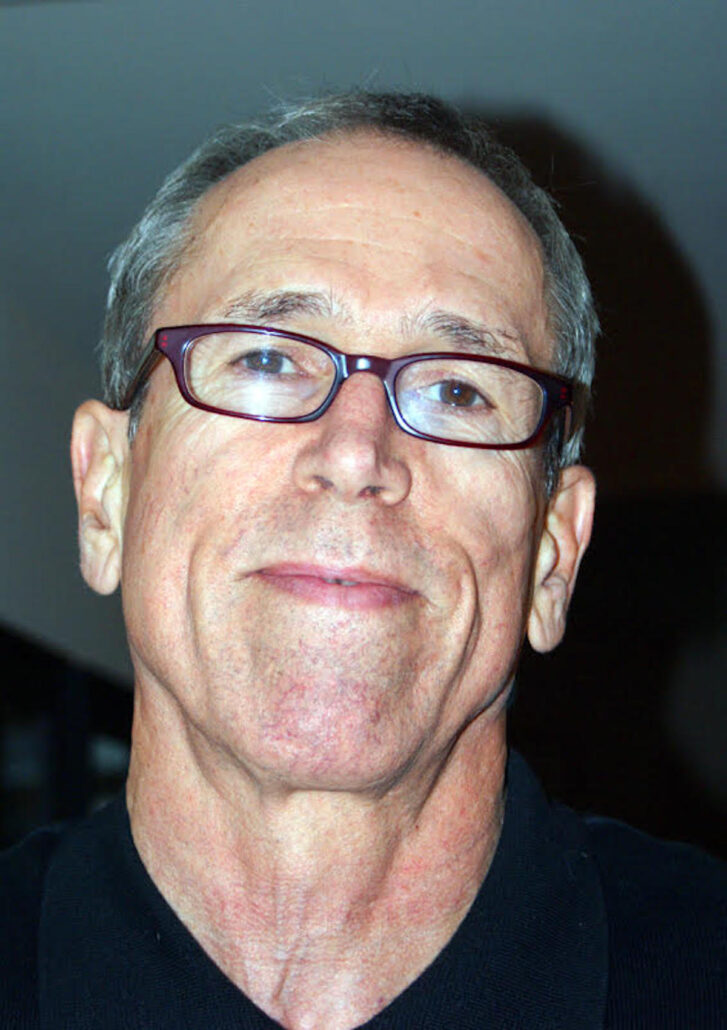 With 40 years’ experience as an artist, Mackie says his interests in sociology, psychology and art were what drew him away from studios and into public works. As he puts it, it’s all about “the art of making places public.”

Cary’s Public Art Supervisor of nearly 15 years, Denise Dickens, says public art is so different from the galleries where art can be purchased off the walls and placed elsewhere. Instead, public art is made uniquely and distinctly for its destination.

In the case of the benches, Dickens says Mackie has stood out over the years for his thoughtful touches and his dedication to research.

“He is a legend in the public art field. Jack Mackie is very unassuming and would not tell you that, but he is one of the country’s premier public art artists in my book,” said Dickens.

She continued to say, “Jack understands the value of what public arts do for a community. Those benches really make us a unique place and they each tell a story.” 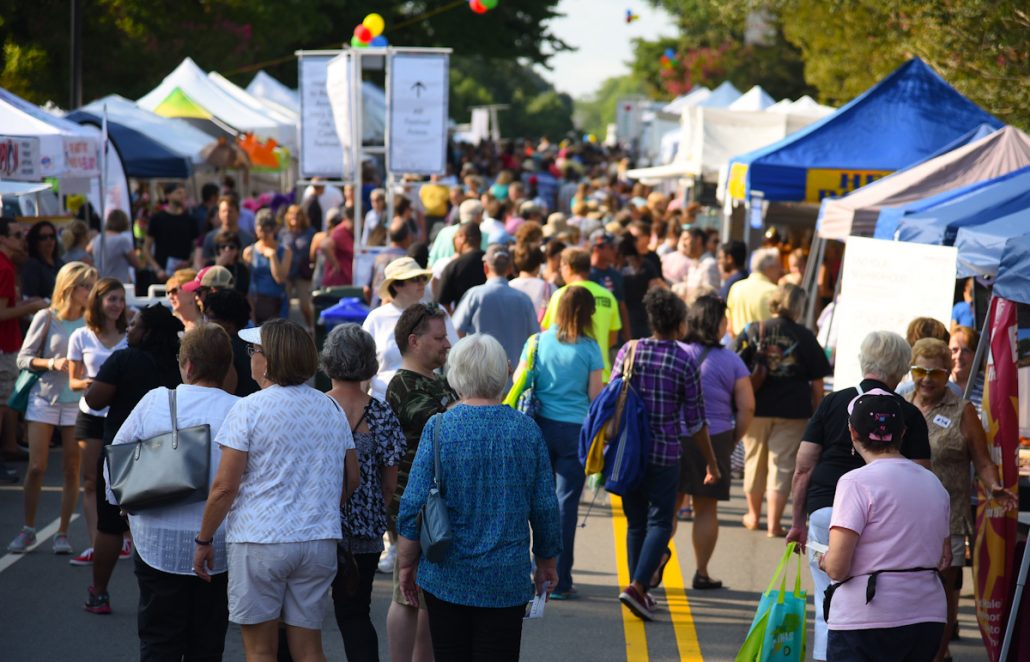 Once a year, Chatham and Academy Streets flood with thousands of people who come together for the Lazy Daze arts & crafts festival.

When initially seeing the Town’s national search for an artist, Mackie was impressed with the location — bookended by the school-turned-arts center and Town Hall and adjacent to the Historical Page-Walker Hotel. He called Academy Street the “cultural, governmental backbone” of Cary.

After tossing his hat in the ring, he was scheduled for an interview the Monday following the annual Lazy Daze Festival.

“Instead of flying in on Sunday, I decided to come in on Friday and just get into the festival, feel the place and see what it was all about,” said Mackie.

He was surrounded by the people of Cary, the culture of Cary and, of course, the many amazing sounds of the musicians that filled the air. The musical aspect of the festival piqued his interest, starting him on the journey of researching the history of the instruments and how they came to America. They became a focal point and the rest followed suit. 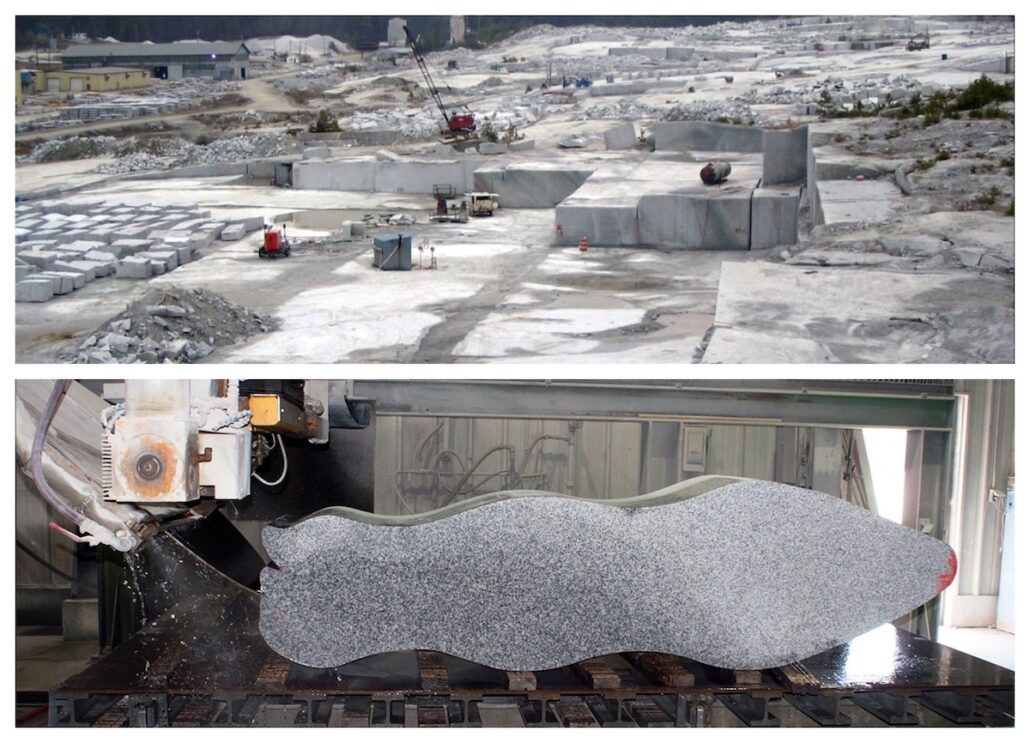 The benches started as slabs of granite in a Mount Airy quarry before being cut, polished and etched into the art we see today.

Once his sights were set on benches, Mackie chose granite from a quarry in Mount Airy, NC to bring them to life.

“I wanted to find an indigenous material for these really indigenous instruments that had found their American voice in the piedmont and in Appalachia,” said Mackie.

From the initial idea to the finishing debut, the project took roughly 3 and a half years. If you’ve seen the details up close, you can understand why. Each bench was cut, carved, etched and polished to showcase words, birds, plants, frets, strings and more — all aimed at deepening the project’s roots into the story of Cary.

The base of the benches shows the raw, unpolished look of the granite while the tops are polished and smooth to the touch. Each instrument-shaped bench shares a bit of text from historical figures in Cary and legendary poets like Robert Frost, Maya Angelou and E.E. Cummings. For these, Mackie says his approach was all about highlighting another form of art that speaks directly to the themes of an instrument or to the music, dance and rhythm that he witnessed at Lazy Daze. 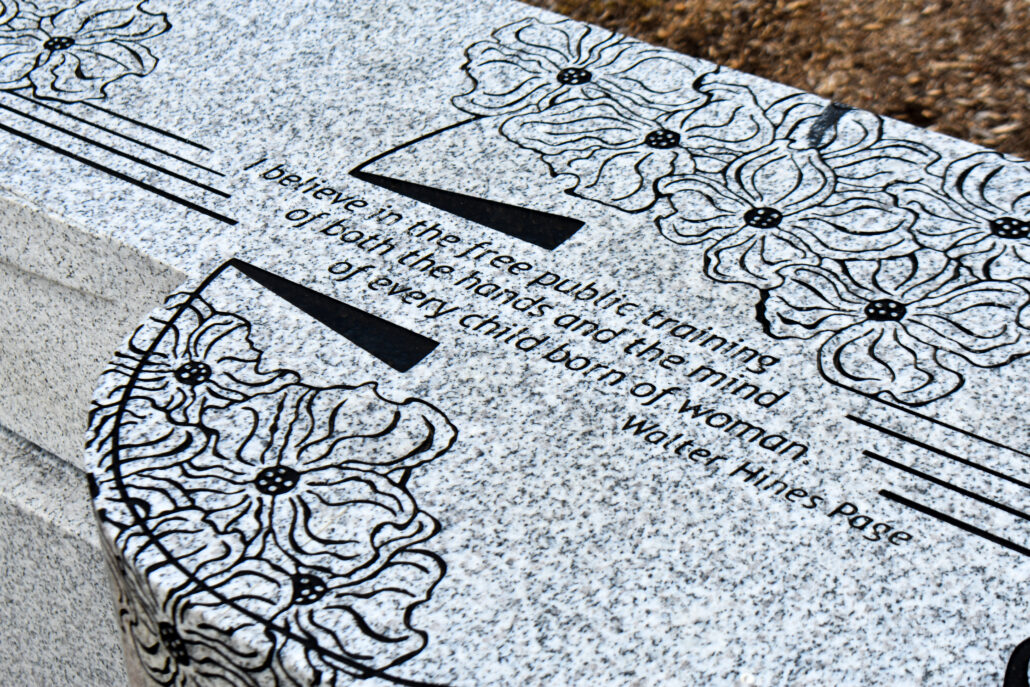 A quote from a key historical figure in Cary, Walter Hines Page, is etched into a bench.

In addition to the benches, Mackie designed the dogwood flower bike racks and even had his hand in the selection and placement of the trees, creating cohesion and harmony between art, nature and functional space.

“I wanted to, as part of the streetscape project, offer people a place and time to sit and dwell. When we stop and sit and look we get a sense and we make a memory of where we are. I think that stopping for a minute is a good idea,” said Mackie.

When asked what he hopes for the people of Cary to get out of his work, Mackie said his greatest joy is to simply see people making use of the benches and taking a moment to find themselves in the stories etched into the stone. One day, Mackie saw a mother and her 3 children sit together on a bench, eating their ice cream cones together.

“It’s for those kinds of moments,” said Mackie. “It’s a place to stop and to sit. It’s a place for musicians to set up and play and a spot for small groups to gather and to interact with strangers.” 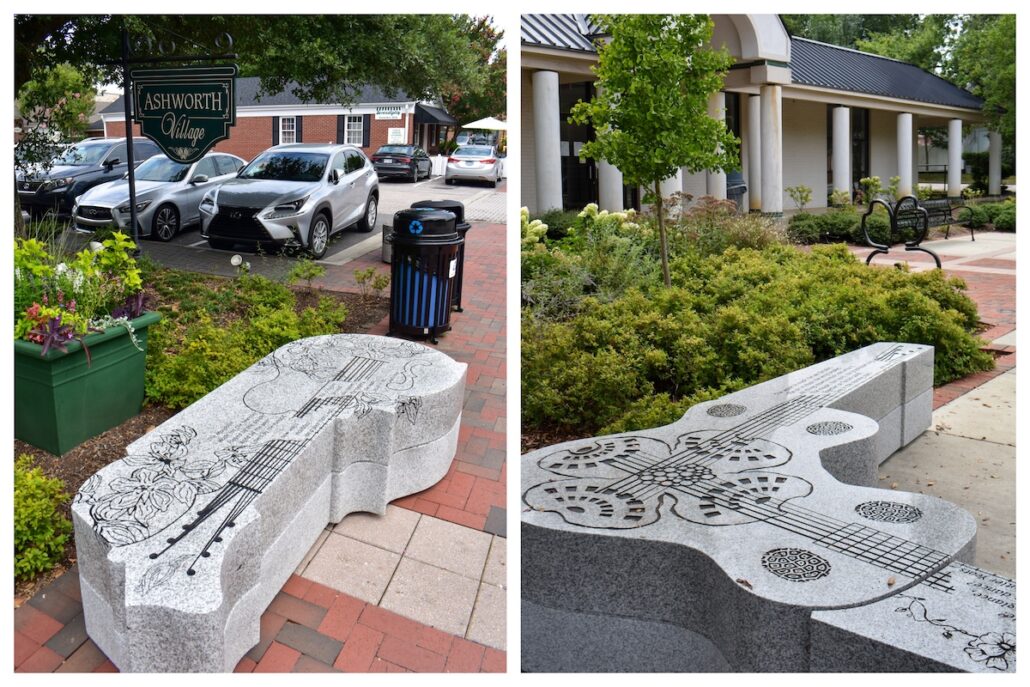 Various instrument benches bookmark sites in downtown such as Ashworth Village and the Post Office.

When Mackie thinks about the people who find themselves walking past his work on Academy, he’s hopeful that they will stop, read and engage their minds and their imaginations in the process.

“As they read through the text, it settles inside and maybe later they remember it and they run the poem back through their mind and take it with them. It becomes a part of them and the stories expand and move along,” said Mackie.

Mackie was quick to give praise to Dickens and the people behind Cary’s Public Art program.

“What makes successful art projects are the people behind the scenes, the unseen administrators and managers. Cary’s program is top of the line, across the country — and I know of what I speak. I’ve been able to work in over 40 years in a whole bunch of different cities, communities, airports, numerous large scale transit, streetscape and park projects and the Cary Public Art staff is top of the line,” said Mackie.

Jack Mackie is one of many who have dedicated their talents to the art of making Cary public. Let us know in the comments what other pieces of our town’s public art you want to know more about in the Cary Public Art series.

Cary History: Volunteering is in Her Bones
Scroll to top