Cary, NC — We hear the screech of the brakes and the clash of the bins each week, but do we ever truly see them?

About 70 sanitation workers are out on trucks working to collect curbside waste in Cary each week. Ken Leach, a 53-year-old driver and crew leader, is one of them. He has been serving our community for just over 15 years.

Growing up in Massachusetts, Leach got right into the workforce after high school.

“At the time, I was making a full-time job out of a bunch of part-time jobs and a friend that owned a mom and pop trash company had a job opening for a collector, so I took it and did that for almost 5 years,” said Leach.

He went on to earn his commercial driver’s license before he and his wife made the move south to Cary.

“We moved down here because the economy was better and my wife had some family down here on Fort Bragg, a daughter and son-in-law in the service,” said Leach.

Another reason for the move was for better job opportunities.

He began working for the Town on March 14, 2005 as a yard waste crew leader and has remained a valuable asset to the Solid Waste Department ever since.

Bringing Thoroughness and Compassion to the Job 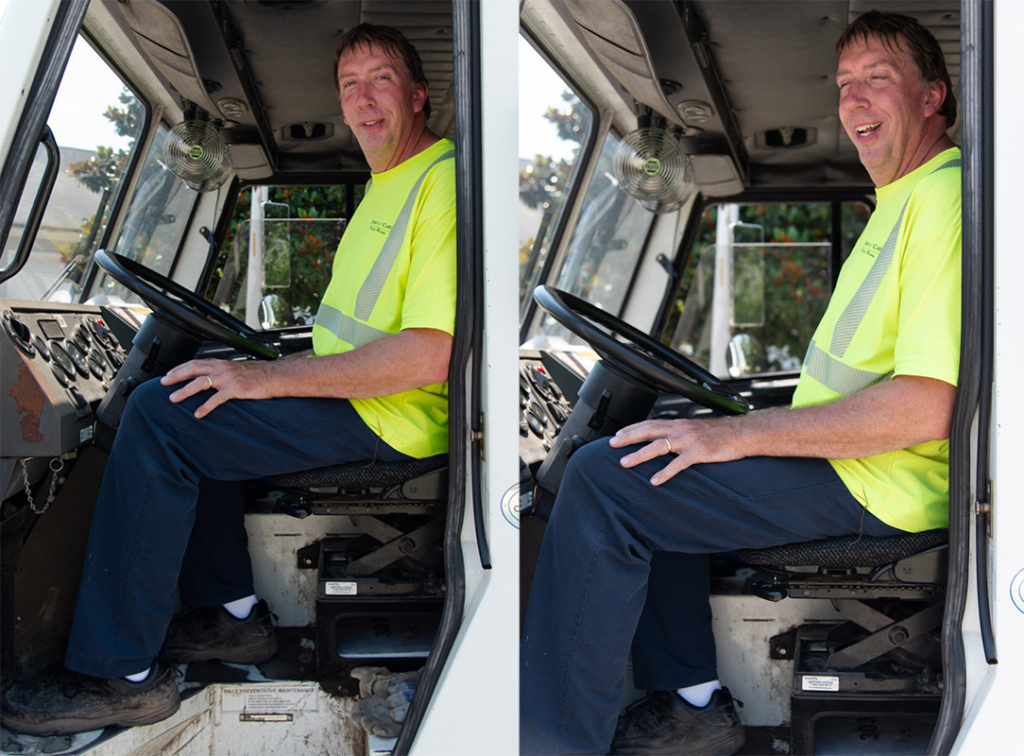 Brian Burgess, Cary’s Yard Waste Supervisor said Leach is known throughout the department as a family man who loves the Lord and has a heart for serving his community. A particular phone call Burgess received from a citizen came to mind from 2019.

“A woman called in commending his crew for outstanding teamwork. She had a lot of yard waste and the crew saw that she was struggling to quickly get it to the curb so the truck wouldn’t miss her. Instead of passing her, they got out and helped her bring it all out to the curb,” said Burgess.

Leach has a track record of going out on his routes early, sometimes before his crew starts the day and has been diligent in making sure they all have access to PPE such as masks and hand sanitizer provided by the Town. In all aspects of the job, Leach shows great attention to detail especially first thing in the morning as he fuels up the truck and makes sure everything is in order.

“All the mechanics in our department say Ken does one of the most thorough pre-checks that they’ve ever seen. It could be the lug nuts are loose and he’d catch it. He’s one of few drivers who do that,” said Burgess.

There’s no doubt that Leach and his crew of 2-3 others have a physically demanding job, especially when the elements are not in their favor.

“We can get a load about 5 to 6 tons if it’s dry and hasn’t rained in a while. If it’s heavy and wet it can easily be 12 tons per load and the guys have to physically lift that into the truck throughout the day, so they do get tired,” said Leach.

Fortunately for him, he has a phenomenal crew who, even on the days when there’s good reason to complain, don’t.

“I couldn’t be happier with my crew. They do what they have to do and they’ve done really well under tough conditions,” said Leach who works alongside his crew in four 10-hour shifts each week, Monday to Thursday.

During this time of Town facilities being shuttered, Leach says they’ve been trying to keep staff to a minimum for everyone’s safety. Also, to follow physical distancing rules, the crew members each travel out to the route separately. 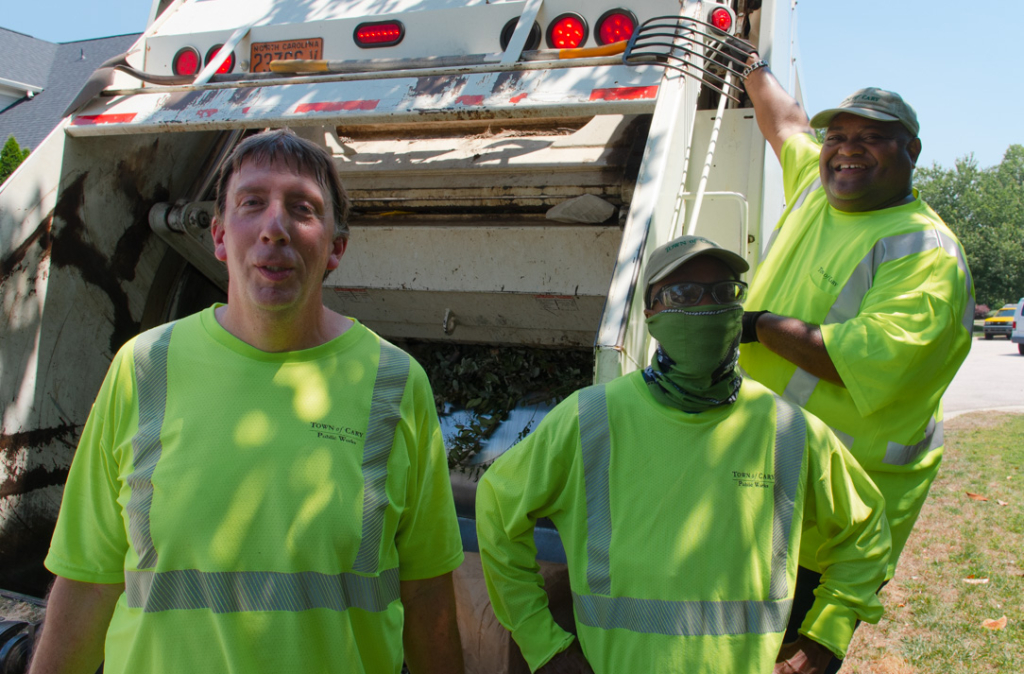 From left, Ken Leach stands alongside his crewmembers Frederick Hackney and Shawn Johnson.

As residents spend more time in their yards, the yard waste piles higher and higher for these crews.

“This time of year it’s longer and rougher because people are putting their yard waste out and it’s springtime. We’re having to get some help from some of the other departments that have been furloughed and I don’t know how we’d make it if we weren’t bringing over more people to help drive and collect it,” said Leach.

While the work is long and hard, it has not gone without a few notable moments of gratitude from customers. Families stand to wave at the crew, hold up signs of thanks and from time to time the crew is offered an ice-cold drink. Recently, on a particularly hot day in a spare truck with no air conditioning, a resident offered each worker a frozen popsicle.

“It was pretty warm and miserable, so stuff like can really help,” said Leach. “I’ve seen a lot more gratitude and waves as we go by and that’s appreciated. That helps us get through the day.”

Words from the Frontline

Leach said that he and his crew do feel a bit uneasy during the pandemic as they handle bins from many different people and houses. What helps them most is staying calm, keeping up the teamwork and getting out on the routes and finished as efficiently as possible.

“There is an element of risk, but we are being as careful as we can by doing what officials are asking us to do,” said Leach.

In his over 20 year career in public service, Leach said he’s never worked under a state of emergency like this. While on the job, Leach has noticed many people are afraid right now.

“I know it’s serious and we need to do what we can do to minimize exposure and all that, but I don’t like how scared some of the people I come in contact with are about it. It makes me feel bad,” said Leach. He went on to say these words of encouragement:

“We don’t know when it’ll get better, but this thing is going to pass and it will be okay.”

The Adaptability of Cary’s Commercial Real Estate
Scroll to top