Cary, NC — Much has been written about Cary’s founder, Allison Francis “Frank” Page — deservedly so. But it seems that we know less about his wife, Catherine, or Kate.

A Daughter and Wife

Catherine Raboteau was born November 12, 1831 in Fayetteville, North Carolina to John Samuel and Esther Barclay Raboteau. She attended Franklin Female Academy, obtaining an unusually robust education for women of that time, including learning French and algebra.

She met Frank Page, who often traveled to Fayetteville, and the two were married in 1849 when she was 17 and he was 24. They soon purchased 218 acres for $2,000 in what is now downtown Cary, including the present-day site of Town Hall.

In 1868, the Pages built the grand hotel later known as the Page-Walker Hotel and today serving as the Page-Walker Arts and History Center. Kate Page oversaw the hotel’s operations, which was fitting because her ancestors had been innkeepers.

The Pages bought, sold and donated land throughout the area that is now downtown Cary. Through real estate and other businesses, including Frank’s main business of a lumber mill, the Pages became quite prosperous. According to Tom Byrd in Around and About Cary:

The sudden prosperity of the Pages is reflected in the way they spent money. Within a year or two of 1870, Frank and Kate enlarged the family home, built a hotel, built a school, and sent their son Walter off to college. And they were probably the major benefactors of the town’s first (Methodist) church, built in 1871.

With the advent of the Civil War, the Pages endured tougher times. In Ghost Hunting North Carolina, Kala Ambrose writes:

The Civil War decimated [the Pages’] family wealth, as it did so many others, and there are some reports that Mrs. Page was seen creating drapes made from worthless $100 Confederate bills.

Catherine took the lead in raising the eight Page children. Around and About Cary notes that “Editor [Josephus] Daniels said the ‘perspicacity and brilliance’ of the children came from her (Raboteau) side of the family while he [Frank] furnished the practical business sense.” In that book we also learn:

A Woman of Intelligence

Catherine was a partner in her husband’s many endeavors, and by several accounts, a well educated, religious, dignified woman of intelligence and grace with a fine sense of humor. A front-page article in the August 9, 1989 edition of the Cary News, as quoted in Around and About Cary, describes Catherine:

As a mature woman (Mrs. Page) was undemonstrative and soft spoken; a Methodist of old-fashioned Wesleyan type, she dressed with a Quaker-like simplicity, her brown hair brushed flatly down upon a finely shaped head and her garments destitute of ruffles or ornamentation … Yet the memories … (she) left are not all austere … She had a quiet sense of humor and a real love of fun.

Catherine Frances “Kate” Raboteau Page stamped her imprint on Cary’s history. Perhaps content in the nineteenth century to be seen as “the woman behind the man”, I think that Kate Page was “a woman out front” who was a significant influence in Cary’s early history. 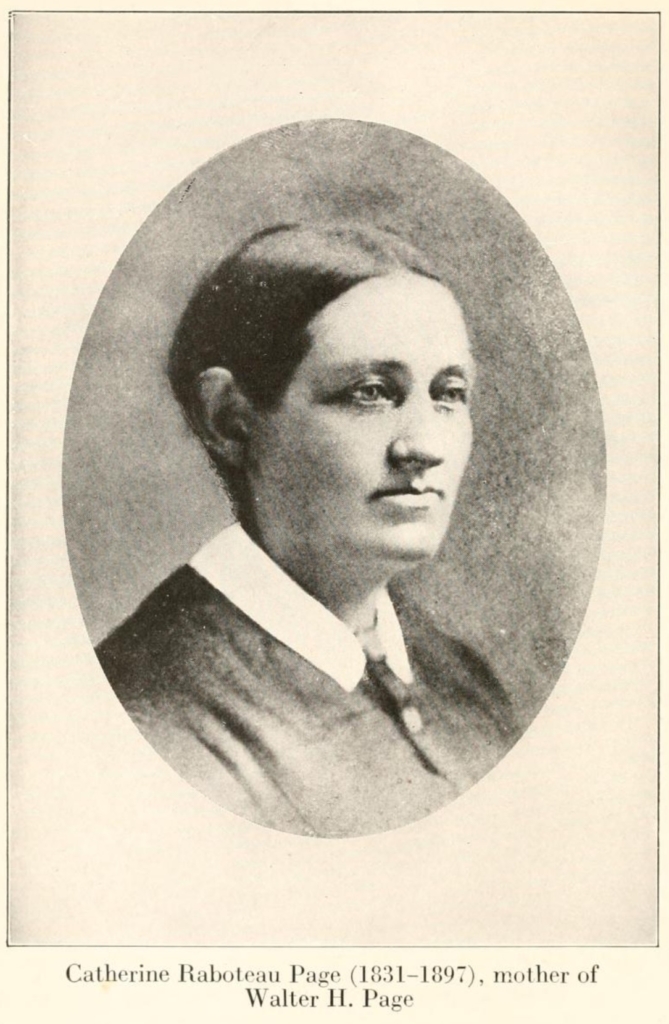