Cary, NC — The Taylor Family YMCA off of SW Cary Parkway is raising funds to bring a new permanent, indoor aquatics center to Cary with construction coming in Spring 2020. Dubbed the “Dick and Jean Ladd Aquatics Center,” the indoor pool facility is designed with the purpose of giving access and opportunity for the community to swim throughout the year.

Once Spring 2021 comes around, the new aquatics center will feature:

The addition of the aquatics center is projected to allow the Y to offer 12,000+ swim lessons.

The Dick and Jean Ladd Aquatics center is set to be constructed on what is now the grassy area between the main fitness center facility and the outdoor pool and pool house. In order to make room for the necessary construction equipment, the playground that is currently between the buildings will be removed, but a new and improved one will be put on site in the future. 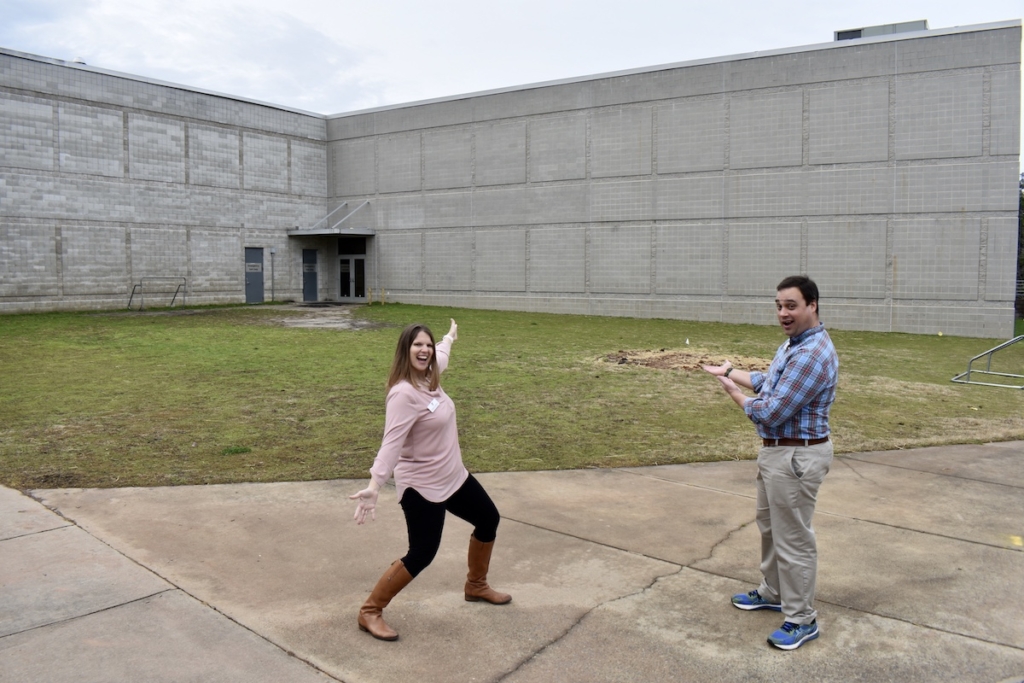 Associate Branch Executive Lauren Chappell and Aquatics Director Eric Bjorkquist showcase the area that will soon be under construction.

History of the Project

The project, more than two decades in the making, has been announced to the public twice before but fell through due to a lack of funds and other priorities coming up for the YMCA of the Triangle Association.

“This time the association has said we’re doing it, we’re committed and it’s time,” said Lauren Chappell, the Associate Branch Executive for the Taylor Family Y.

Chappell said including Dick Ladd in the name of the facility was a must as he helped get the YMCA started which previously went by the name Cary Family YMCA. Ladd was always vocal and adamant about pushing for the construction of an indoor pool. “That’s why it’s named after him and his wife who have both passed. Their kids are helping to steer this process and the volunteers in the community have made sure their names are present,” said Chappell.

Aquatics Director Eric Bjorkquist is a huge driving force behind this project and is quite possibly the most excited person about it.

“The main thing for us is that we’re looking to serve more people and different people in different ways than we have before. That’s probably the most exciting part,” said Bjorkquist.

One of the ways the upcoming build will allow the organization to do this is the addition of two private locker rooms. These locker rooms will be a game changer for individual parents who need to keep track of two or more opposite gendered children.

“It is problematic, and I can’t tell you how many times I’ve had to retrieve little boys for their mothers out of the men’s locker rooms,” said Bjorkquist.

Additionally, if there is a person with a disability coming to the facility and they have an opposite gendered caregiver with them, the option of smaller, private locker rooms will create better ease of use.

“This is going to be great and it’s just one more way that hopefully we can accommodate more people and make them feel comfortable about coming to the pool and can feel good about being here,” said Bjorkquist. While these private locker rooms are just two little rooms with showers, sinks and toilets, Bjorkquist says they will make a world of difference.

Another part of the community the indoor pool will be able to accommodate better is those in need of water therapy.

“With a pool that we can keep warmer, we could have water therapy for arthritis, water aerobics for older folks and for people with disabilities which is going to be fantastic,” said Bjorkquist. 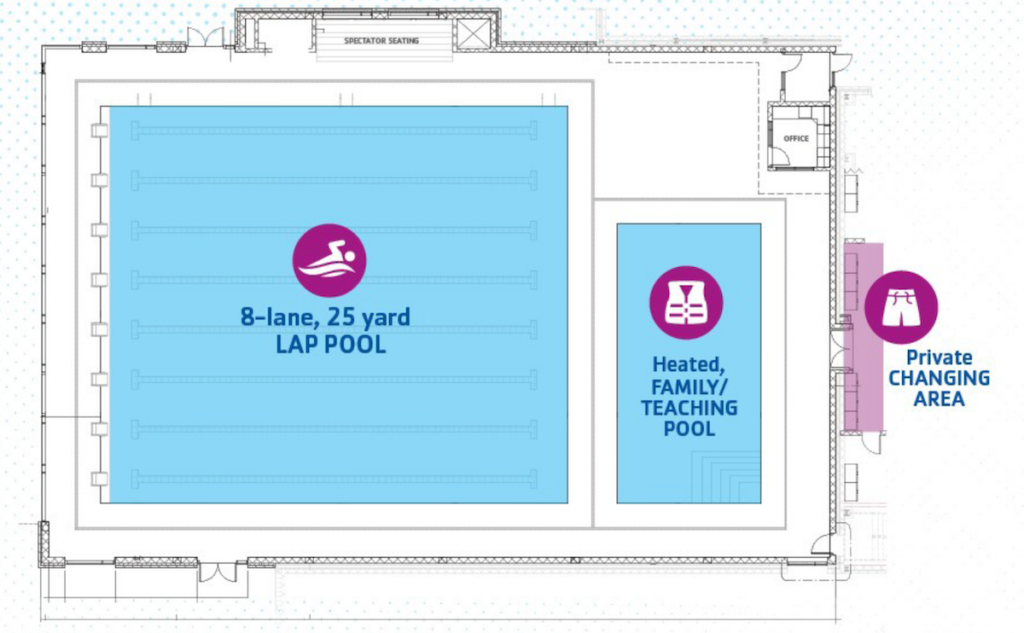 A diagram of the Dick and Jean Ladd Aquatics Center slated to open Spring 2021.

In the summertime in Cary, there is no shortage of pool space as there are many neighborhood pools operating during that time of the year. The problem arises when those pools shut down and there is a distinct lack of usable water to be used for programs, classes and teams in Cary.

“Right now we are programmed to the max. There is a strong demand in this community for pool space,” said Bjorkquist. “That’s one thing that we are trying to remedy with this.”

“It’s lap swimmers that have a high demand and we’re not able to serve our own members the way we would like to. So, with this, we’ll be able to open it up for our members but also other communities as well” said Chappell.

The Y’s own year-round swim team could be expanded tremendously according to Bjorkquist. There are also high school swim teams in the area that have a need for space.

“I don’t know that this will allow us to afford more space for them, but there is that potential there,” said Bjorkquist.

Since the 1990s at the Taylor Y, the organization has invested in installing a large, insulated “bubble” around and above its outdoor pool to allow members to swim during the fall and winter. With the opening of the aquatics center in Spring 2021, the bubble and the stresses that come with it’s put up and take down will be no more.

“We have the bubble up now and buying the bubble has served us very well, so we’re good but the bubble is coming to the end of its life and we’re looking to the future for something that’s more sustainable and can accommodate more people and in different ways than can right now,” said Bjorkquist.

From the week after Labor Day to the last week of April, the bubble stands tall, but the installation and takedown are usually a 3-4 day process — and not inexpensive ones.

“We spend about $26,000 for insulation removal every year,” said Bjorkquist. “Putting it up is a bit more intensive because the Town of Cary permits it and inspects it like an actual building, so any changes to the building code have to be reflected in the way we put it up.”

While Bjorkquist has always been happy the Town of Cary’s help to keep the bubble up to code, the new facility means no longer needing to go through an annual inspection process.

The total cost for the 10,000 square foot aquatics center addition is just over $5 million dollars. Of that amount, 3.1 million has been raised through fundraising efforts in the past. Through the Y’s Capital Fundraising Campaign launched in January 2020, the organization hopes to raise an additional $500,000 in community support.

“Beyond the money in hand and the $500,000, the remainder of the project will be financed with debt taken on by the association,” said Bjorkquist.

The organization received a challenge gift of $150,000 and whatever amount is raised by the community, up to $150,000, they will match it.

Community supporters can donate to the project’s Capital Campaign or find more information on the Taylor Family YMCA website. For any further information or questions, contact Eric Bjorkquist, 919-653-2378 or [email protected]org.

According to Bjorkquist, “Your investment will guarantee more space for families to play, for senior citizens to stay active, for children to compete or just make a big splash.”